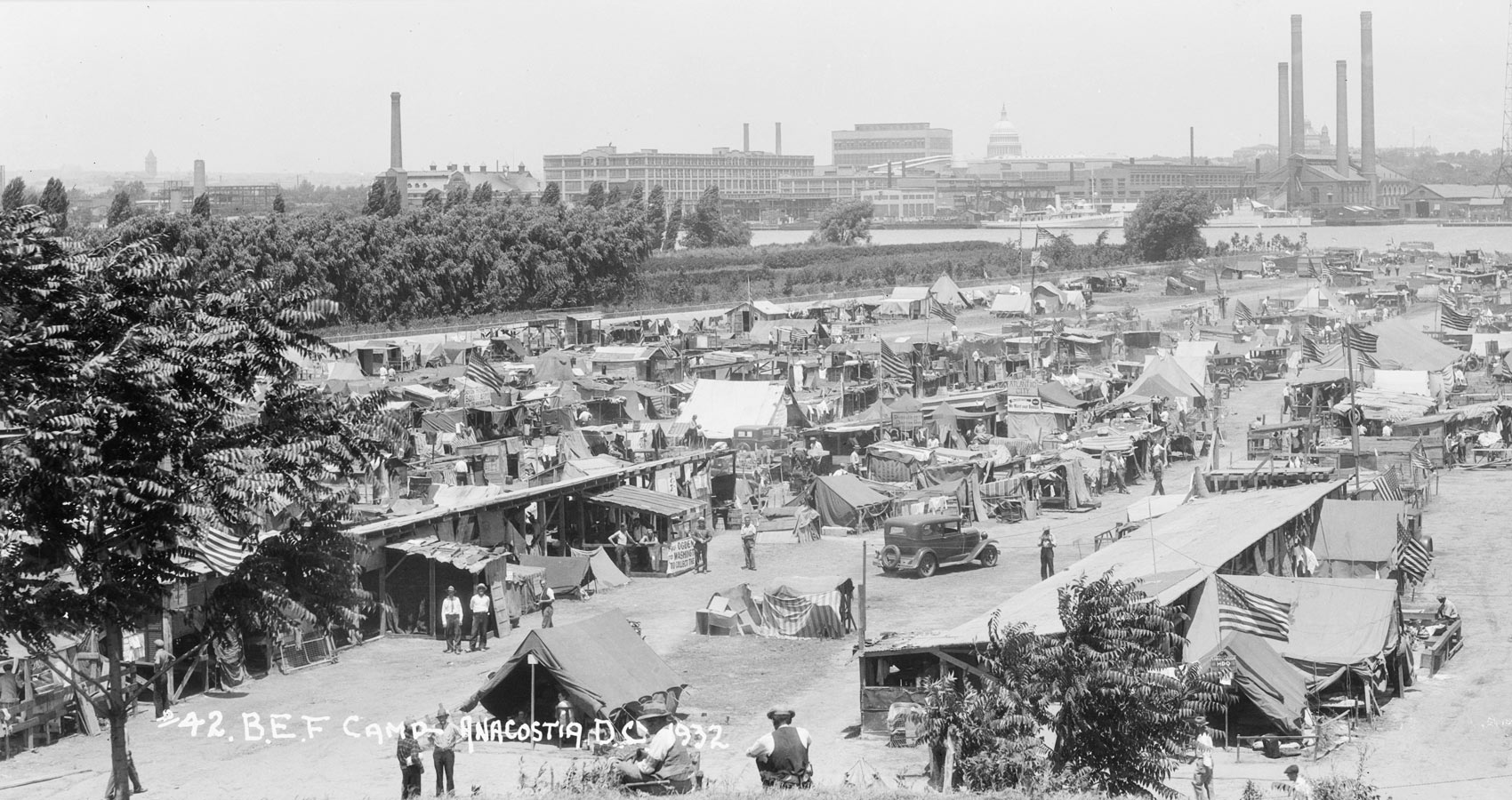 Pa decided to join the Bonus Expeditionary Force. After dropping Ma and the youngsters off at Uncle Vernon’s, he let me ride the rails with him from our home in Waynesboro, Pennsylvania, all the way to the Washington Freight Yard.
Pa and thousands of other veterans were demanding their bonus pay—the money they could have earned if they hadn’t gone off to fight for their country in the Great War. No man wanted to wait until 1945 to get paid, not while his family was starving. That’s why we came to Anacostia Flats, a swampy, muddy area along the Anacostia River across from the Capitol where we could see the dome. Ankle-deep in mud, Pa and I built our shanty along with forty-three thousand, counting wives and children—the biggest Hooverville ever, named after the president who no one seemed to like.
When the bank people came to take our farm, Pa rushed out of the house with a shotgun and fired over their heads, scaring me and Joey. Ma cried. The twins howled and clung to her flour-sack dress. Pa cursed the politicians, said they were just bumping gums when it came to veterans’ bonus pay.
We made our shack out of materials from the nearby dump site—old lumber, packing boxes, and scrap tin. Pa and I worked shoulder to shoulder. He started calling me Tom instead of Tommy.
Other veterans were scattered around Washington in deserted billets, but Camp Marks was the heartland. We built a real city with streets, latrines, a barber shop, a lending library where I spent most of my time, and a boxing ring, where Pa liked to spar.
For breakfast and dinner, everyone ate a stew made of potatoes, onions, and hotdogs. We lived on Pennsylvania Road, a place I called home.
Next door was a colored man from Harrisburg and his son Cornelius.
Pa said two things made a man equal—fighting for your country and taking care of your family—so it appeared, ‘cause everyone got along. Pa said the newspapers lied, wanting to cause trouble, saying the races couldn’t mix, and that communists were infiltrating the camp. How could that be when everyone had to show their service certificate?
One day, Pa and I walked to the top of the bluff where we looked over the entire encampment. From poles and shanties, hundreds of American flags rippled in the breeze, showing how much we loved our country.
That night we took our meal back to our shack. Pa gulped his down and said, “War makes rich men richer. Remember that, son, before you go off to be a pawn in a rich man’s game.” I didn’t eat much after that. Pa’s anger and bitterness filled my belly instead.
A few days after we settled in, we walked to the Capitol where the House of Representatives took a vote on the Bonus Bill. Pa and I wore white shirts and bib overalls, wool caps—hot for June, but that’s what we had, being farmers and all. Other men dressed in wrinkled suits and worn fedoras. The tall columns dwarfed the people on the steps. Veterans sang, “America,” the air itself charged with hope.
When the organizer, Mr. Waters, came out and said the House passed the bill, I never heard such whooping and hollering. Tears ran down Pa’s cheeks. Hats twirled in the air, cheering going on for near half an hour. We had money and could go home.
But when we headed back, Pa said, “Son, this is just one hurdle, the Senate has to pass the bill and that’ll be harder.”
“Why?”
“More Republicans in the Senate.”
What seemed whacky to me was how something so sensible, like paying people their due, had to be voted on in the first place.
That night sleep came in jerks.
Two days after the House passed the bill, we went to the Capitol for the Senate vote. Veterans held signs reading, No Pay We Stay, Give Us Our Bonus Or Give Us A Job.
Pa’s fists stretched the holes in the pockets of his overalls, his jaw working back and forth. I could feel him wanting to get into the ring while we waited. He took off his cap and looked to the heavens.
Pa’s bonus money went down in the Senate. He said it was like the crash of ‘29 all over again.
I was too old to take his hand, but I let him take mine.
“We’re staying on son, until justice is done.”
Some folks left. But many stayed, with more coming from out west to join in the protest.
Toward the end of July, Hoover demanded that all veterans go home, but most had no home to go to.
On July 28, thousands of us walked to the Capitol. Food was becoming scarce at Camp Marks, so everyone looked gaunt, but we were righteous in our cause, and that gave us strength.
Police walloped the protesters with their billyclubs. We broke through their line and ran. Gun shots fired. Women screamed. It turned into a riot, and then I saw the U.S. Army marching toward us.
There was infantry, soldiers on horseback, tanks. They were coming to rescue us. Overjoyed, I cheered along with Pa and everyone else. The army aimed their rifles. Sunlight glinted off the tips of their bayonets. But then—
. . . they were charging at us!
Bile roared in my stomach. They hurled gas grenades. People scattered.
I hacked; snot poured from my nose. I experienced Pa’s pain from being gassed in the war.
Veterans threw rocks at the army.
I shuddered, knowing my father could be killed by his own.
We ran toward the flats.
But what we were running to suddenly rose up in flames—the shanties, the library, all of Anacostia Flats.
Pa put his arm around my shoulder while we watched our city burn. I held back tears, wanting to be strong for my father.