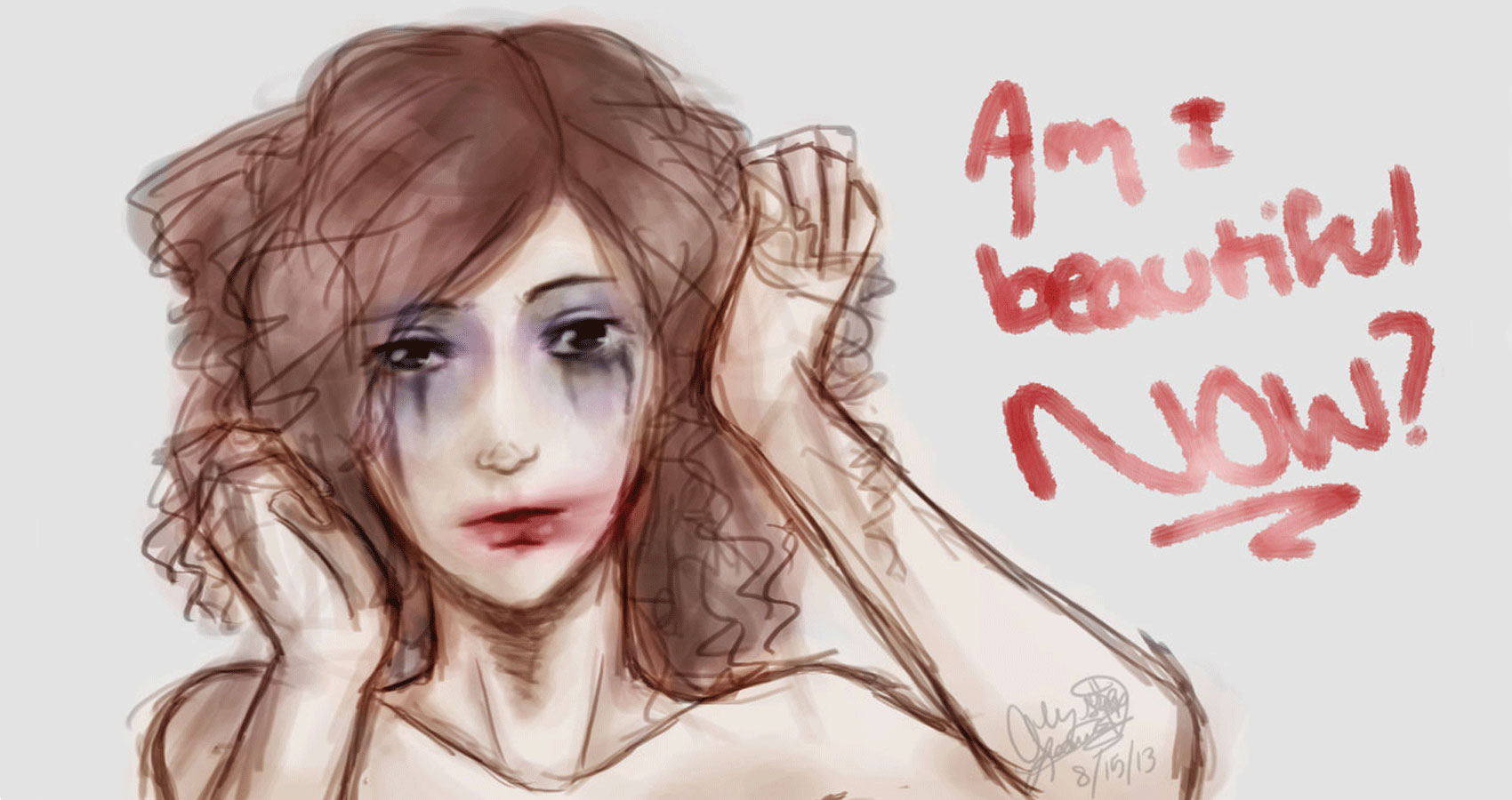 Am I Beautiful Now?

Am I Beautiful Now?

The day I was born, my daddy held me in his arms, looked into my mother’s eyes, and whispered, “She’s perfect.”

Untainted and in pure form of newness to the world, I was the reason for my parents contentment.

They swore that my smile lit up a room, and the fact that I was loved became a matter that was irrefutable.

To my parents, to my family, to the world, I was beautiful.

But there would come a day all too soon, all too young, all too innocent

When my caretaker would convince me that the words “beauty” and “my body” were two ideas that where entirely too dissonant.

So I starved myself, ran off what little calories I consumed, and quickly lost weight.

At 14-years-old I stepped on the scale and watched the number 85 appear.

I was thinner than most, and better yet, happy, but blind to the fact that my illusions were severe.

Contentment came short-lived, as this type is usually known for.

Insecurity came back with a vengeance as my mind demanded an encore.

I got older and realized that my face lacked the symmetry I found in my magazines:

I had small lips, a round face, and crooked teeth that could never be witnessed on a movie screen.

And I was certain that if I didn’t change anything, then I would never stand a chance

So I clumsily applied some makeup, got braces, and shopped for tighter clothes,

Promising myself that I would never again live in the footsteps of my friends shadows.

Summer passed, and I had been perfecting my new look every day.

It took a lot of work, but on the first day of school, I knew the old me had gone away.

I got the attention I so badly desired, but what nobody told me

Was that I’d never be able to understand why people hadn’t flocked to my past-self, even though I still had the same personality.

I was still incomplete. I still wasn’t happy.

My need for acceptance became a self-fulfilling prophecy.

But comparison became a drug, and I was a heavy user.

The television left me craving more, and I revolutionized my passions to be replaced by consumer.

I knew that something was wrong with me, I guess I’d always known.

It was apparent in my family, so I allowed the doctor to hand over my next milestone.

Huntington’s Disease. Positive. One word that changed my life forever.

My childhood fantasies got swept up in the flood I was drowning in.

My cry for help only emerged as a haunting silence that clawed beneath my skin.

I spent my days beneath the covers while all my friends went on with their lives.

Nobody wanted to hang out with the sad girl, especially when they couldn’t empathize.

And all of the makeup in the world couldn’t force my emotions to commit.

I didn’t want a mourning period, I wanted to fit in

So I went to the doctor’s to be inscribed with every possible prescription he could’ve written.

They made me sick, dizzy, and weak, but I was informed this was “standard”

My mind became numb enough to tolerate putting on the mask that society preferred.

Maybe I acted like I was happier, but the pills only replaced who I really was with someone else.

I could hear their whispers. This kind of gossip always circled back to me.

Our friends. Our family.

To them, if I remained single my whole life, I would be labeled “sad,” “alone,” and “anomaly,”

But if I fell in love, I’d be trapping him in a snare, becoming “selfish,” “irresponsible,” and “greedy.”

I told myself I would never marry, but there I stood at the altar

Everyone told me I looked breathtaking, but I knew they all felt so unsure

Draped in all white, I was meant to represent everything joyful, everlasting, and pure

But I couldn’t shake the facts: That this marriage would be chaining him down to a sickness that had no cure.

I didn’t want to ruin it, so I pretended that my tears flowed from gaiety.

But “in sickness and in health” stabbed me with the sharp knife of reality.

And everything was numb besides one emotion: Guilty.

I wanted to hang on to who I was, my honor, and my pride.

Growing old with the one I loved was a right we had been denied.

But I stapled on a smile so that everyone else could at least feel temporarily satisfied.

It was supposed to be the happiest day of my life, but with every motion I presented as bliss, I lied.

My sickness is in full effect, and I never stop moving

The person I was is long gone now, but I still try so hard to keep improving

My husband spoon feeds me, changes my clothes, and patches my wounds when I fall

But when night comes, he thinks I can’t see that he is drowning his pain in alcohol.

And I am the cause.

The woman he once loved is now hiding under thin limbs that are covered with gauze.

I can’t hide behind makeup, fix my hair, or speak words of charm and wit.

I don’t know if this is who I truly am now, or if my reflection is just counterfeit.

When I was just a baby, the world saw me as lovely and pure

Even though I was completely dependent, clumsy in my new skin, and the embodiment of immature.

Now, I am similar to a baby in almost every sense,

Except now, no one thinks that my helplessness is cute or mistakes my infantile behavior for innocence.

Despite my past efforts to layer on different masks so that the world would see me as pretty,

I had always secretly wished that I could be myself. No makeup. No charm. No “body.”

I’ve lost all control of my figure, my hair, and my mood.

But the only attention I receive now comes from curious stares and looks of pity.

I only wanted to be purely me. I thought it might be pretty.

Everybody I’ve ever loved has come out to see me today.

The room is packed shoulder-to-shoulder, and food is being served that is nothing less than gourmet.

Only the best for the best, they’d say.

People took turns coming up to me

Telling me that I was loved, I was beautiful, that there was no place they’d rather be.

“Her dress is perfect!” “Look at her nails!” “Doesn’t her face look lovely?”

They touched my perfectly curled hair and kissed my airbrushed forehead.

My husband re-read me his vows and embraced me as if we had just been newlywed.

This was what I’d always wanted: To be loved.

But I was dead.

My body’s twitching had finally ceased. I lay in my casket peaceful and still.

The mortician had plumped up my skin and enhanced my best features so I looked like I had never even been ill.

In fact, my figure had taken on a perfection that in life, I could never achieve.

I lay looking as new and fresh as the day I had been conceived.

My goal had finally been reached, so I stood up to take a bow

Shouting to ears that couldn’t hear and eyes that never saw:

“Am I beautiful now?”