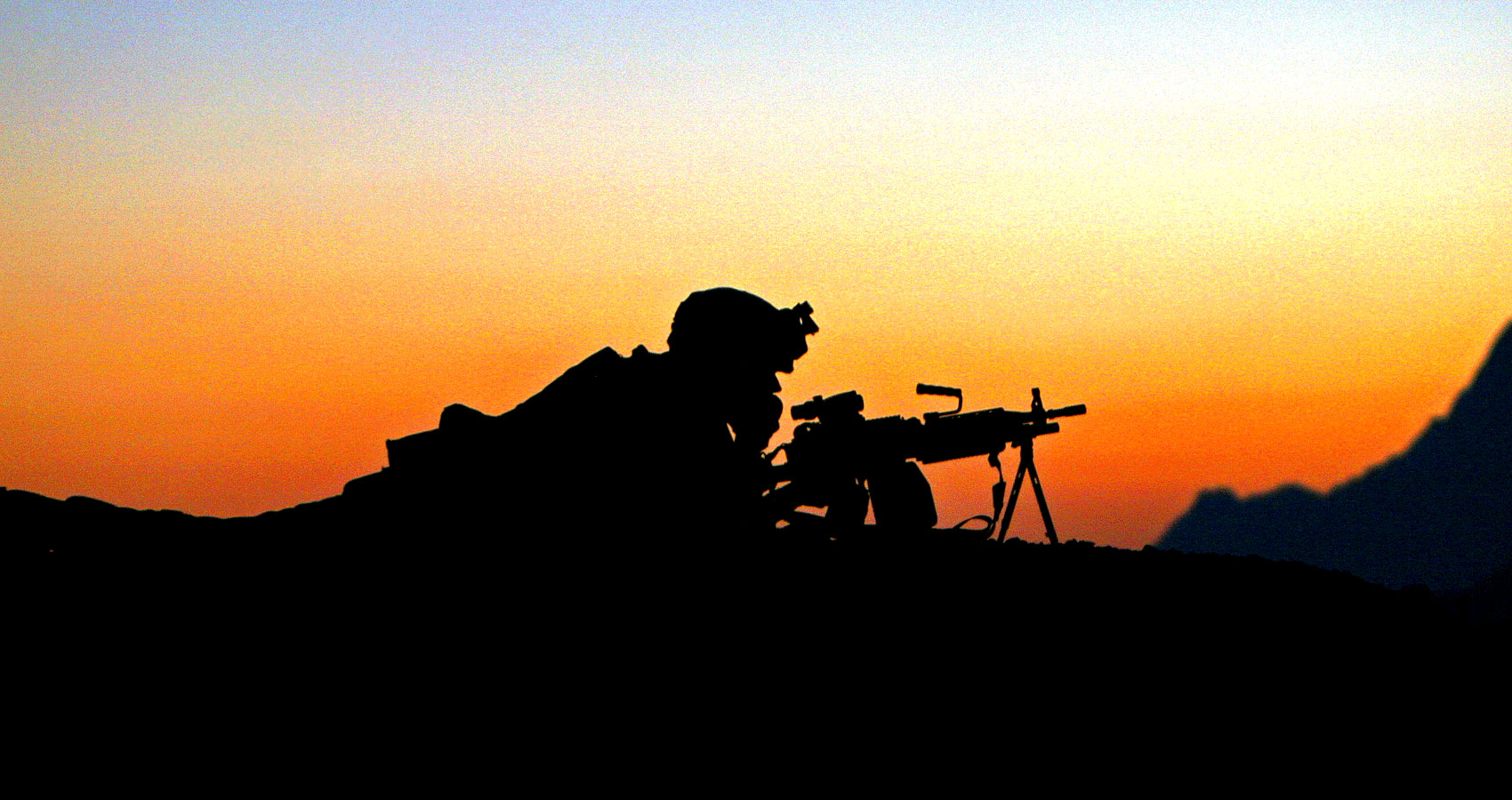 The sun was maliciously hot that day in June.
The heat swelled his dusty wounds
Still raw from crawling-
He circumvented the Taliban
Dragging his rifle through the grass:

Who’s the soldier now my son,
Who is carrying a gun?
Don’t be afraid, the war has just begun.
Go out there and have fun!

From where the river ran
Closer to the camp the insurgents crawled
Lugging their layered forms over rock in the gristle-dry
Moon-dry landscape,
Pissed on by goats.

The sun’s grinding rays
Scrapped his eyes like brillo-pads
Week-old grease.
Pulling his hat down, he settled behind the tumbledown scree.
He adjusted the sights.
Across his outstretched legs lizards scurried.

The mortars fell like hiccups exploding from the gut.
The mortars tore up bodies throwing them before the wind.
The mortars cried burrowing through the air.

Who’s the soldier now my son,
Who has a gun?
Kill beneath the leering sun-
Get out there and have some fun.

He knew who to kill.
Not why. He knew how to kill
Not the reasons for refusing!
He slowly, quietly, pulled the trigger,
The bullet burst out whining across the crumbling landscape, its course pre-ordained, its end
As complete as death. Death was its end
In a soft cry of expiration.

No heaven met, no god examined, no concluding prayer, no final evaluation, no joy, no experience!
A dead man in the dust!
A dead man-dust to dust!

By dinner Dave had reached the camp again
Without much trouble.
He’d been spotted once by a woman washing clothes in a mountain stream, her eyes fixed upon him
For a moment, full of contempt.

“Got him with one shot. Well done,
Old son. Got him with a single shot.”
The colonel was full of praise. Downing a vodka, he
Picked at the pineapple cube on his dish,
And crushed it between his busy fingers.
An intelligent man, but a soldier too,
A poet at times whose words clawed at his memories, paying pale homage.

“You are a marvel, young man.
Four this week. Well done.”
The overhead fan twirled noisily,
Clashing with his redundant pride,
Giving meaning to a pointless war
In a torrid land full of becalmed ideas and underlying prayer.

“I’ll write a commendation for you,
Young man. You deserve it.”
The colonel continued, basking on olives.
“Your skill with the gun
Is astonishing. You deal death like
Other’s write poems. You destroy
With a well-balanced phrase. There is beauty
In your honed and natural talent.”

Others slapped his back as he passed
Beaming with approval, lavish with praise,
Expressive with congratulation. At that point,
In that shell-tight room, he felt himself a hero
An Achilles, an Odysseus, a haunted Vietnam veteran.

When the wind broke, rivers sidled up the canyon walls
Immersed in the valley. The sun glowered
Scorching lungs.

Scattered around the shattered jeeps
Expelled their contents-
Broken and dismembered.
Triggered mines exploded one by one
In hellish sequence,
Flames of cooked air
Tearing wantonly into flesh.
His rifle lay embedded in his hand.

The colonel wrote sadly
Of an incident sparing all ugly details,
Of those who died that day
In a minute of bloody confusion.
He spared the ugly details
Vividly describing heroic deaths in the wadi
Of men he’d known well.

The Officer’s Mess was silent-
No jokes were cracked, no backs,
Slapped, no congratulations expressed.
In contemplation the soldiers read, studied form, thought about their families,
Trying, even in solitude, not to die.
Outside the camp walls, demolished by the heat,
Caricatured by flies,
The child’s motionless body lay
The child dispatched by a sniper’s clean bullet, slumbering
In the dirt.