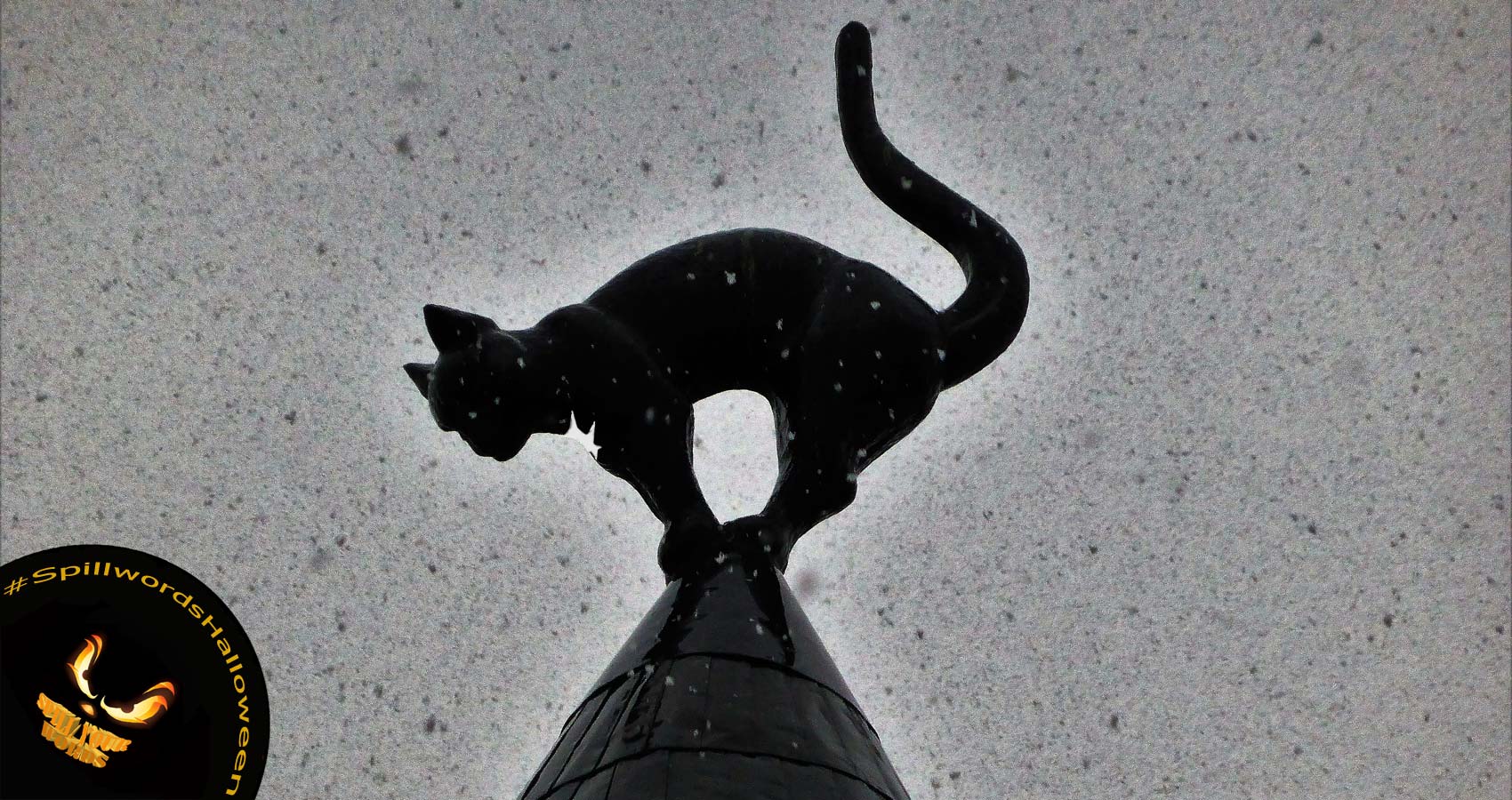 Arianrhod conquers
and ascends the pastel moon
over the emerald charcoal hills
of Devil’s Beef Tub. The moon’s
transparent pastel light peers
through the chipped stones,
Danu’s olive moss, and
into the silent stone streets
of Annan.

Annan Old Parish Church
bells pendulate front to back,
chiming angels’ hymns
for the faith hearted,
the doubtful, the intoxicated
and the dead to listen.

An impious shadow
appears and tiptoes
on its four legs around
the town. The shadow
was large, like an Irish Setter,
casting its irreligious
presence against the white stone
sides of the houses.

The shadow’s pointed ears
rotate, listening
It turns its head
side to side, searching
and claiming a soul.

The creature ceases
and sits across from
an opened window
with a burgundy curtain
being blown by the cold air.

A scarlet-golden flame
on a tall white candlestick
sits on the window’s edge, luring
the surreptitious creature
to come and enter. The orange-gold
flame’s glow and warmth
soothes and attracts the creature’s
desire.

It lowers its back,
jumps and with its
long, front legs, climbs
on the window’s ledge.
It arches and lowers
its curved, black back.

Its long black tail
curls, lowers to the window’s
edge and pendulates side
to side, subpoenaing
the creature’s ravenous
nature.

Beside the flame’s glow,
its identity revealed:
an iniquitous black
Cat Sìth with a white
spot, shaped like a shattered
church glass window on its chest.

Its green-golden eyes
become dialed. Its head
leaned forward from the window.

The Cat Sìth stared
at a young woman’s corpse
lying within a wooden coffin
with two long black candlesticks,
lit at both ends.

She was delicate and
beautiful, like a porcelain
doll displayed
at a store’s window,
for grief-stricken eyes
to view her before she
is sealed and buried
in Danu’s soil.

Her curly red hair draped
over her shoulders. Her
arms folded across on
her chest, holding onto
a wooden rosary, in silent
prayer for her soul’s salvation.

She wore an emerald
dress with faded golden
swirls and leaves
weaved around her waist.
Around her neck, she wears
an orange silk choker
with a golden heart at
its center.

The Cat Sìth’s black
front legs are lowered.
It lowered its head down
at the window’s edge. The composed
Cat Sìth plummeted and pounced,
pressing its four paws
against the floor’s dark brown surface.

Its curved body rose
and swayed side to side,
walking towards the coffin.

The Cat Sìth ceased,
sat and stared upward
at the coffin. Its black tail
swishes rapidly around the floor,
while the Cat Sìth ponders.

Its transparent white whiskers
brushed against her pale, cold
cheeks. Her skin is unable
to feel the wicked creature’s
whiskers caressing her.

The Cat Sìth’s green-golden eyes
illuminated and glistened
the creature’s desire
of snatching and dragging
the young woman’s soul
away in the night,
like the Grim Reaper
appearing on the bedside
of a dying person.

The Cat Sìth’s mouth
and pink rounded nose leaned
over to the corpse’s ear whispering
in a deceitful voice,
“O’Come, O’come slumbering soul.
Your mortal flesh confined
by wood and covered
in Danu’s soil, while your
soul will be snatched away
into the emerald moors
by the Celtic gods.
Come away with me into the night
where I shall take you to a better
place than the Land of the Youth.
O’Come, O’come slumbering soul.”

The flames of the two long black candlesticks
blew out. The candlestick by the window
blew out. The Cat Sìth dissipates
from the coffin’s side, caring
the young woman’s soul
into the night’s surreptitious, unsettling veil.

Christina Ciufo is a passionate writer in poetry, short stories, flash fictions, fables, and completing her first novel. At a very young age, she always had a passion for writing stories and poems, specifically in fairytales, folklore, supernatural, and horror. After graduating Sacred Heart University with a BA in English, she continued to expand her writing abilities at Manhattanville College’s MFA Creative Writing Program and by May 2017, graduated with an MFA degree in Creative Writing. She completed Sacred Heart University's Education Program in December 2018 with a MAT in Teaching in both elementary and secondary. She is currently a Sunday School Teacher. She has appeared in Gravitas, Spillwords, Ovunque Siamo, Nymphs, Vamp Cat Magazine, Z Publishing Ohio, Nightingale & Sparrow, Truly Review, Mookychick, Door is a Jar Magazine, Bonnie's Crew, The Poetry Question, Twist in Time Magazine, Moonchild Magazine, The Wolf Feeds Poetry, Crêpe & Penn, Marias at Sampaguitas, Cauldron Anthology, dream walking, Selcouth Station Magazine, Beneath The Fever, The Wild Literary Magazine, Speculate This Magazine Analogies & Allegories Literary Magazine and The Clay Literary Magazine.