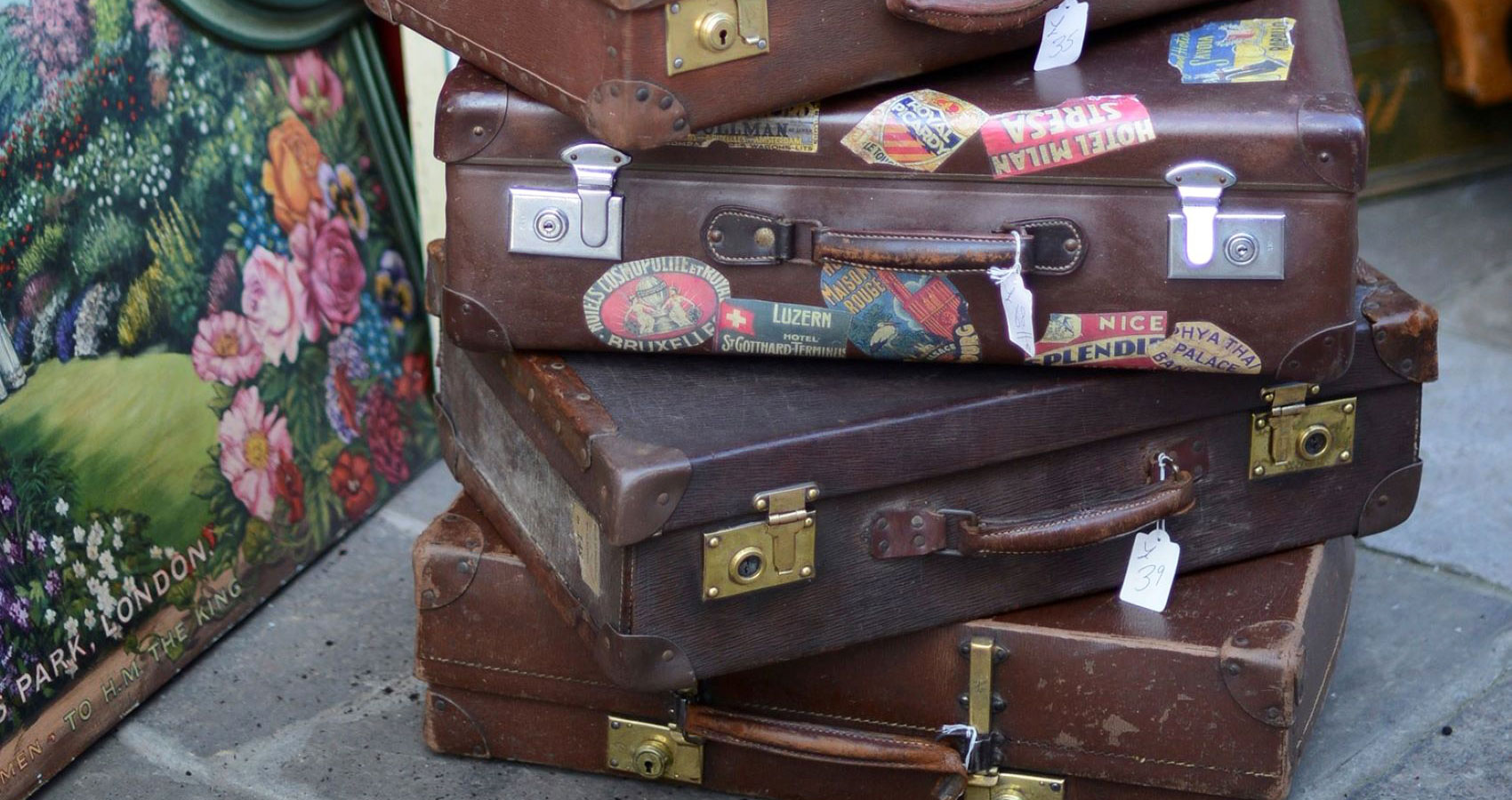 At the corner Nicholas got off the 452, ducking over the road and behind the bus as it slugged away with a low Tom Waits moan. In a fog he wondered if his jeans and shirt still carried the death scent of disinfectant and sick. He couldn’t tell anymore. The sun had brought the tourists and college kids; it would be a slow bustling waltz up the road. He glanced left toward the lower end of the market: the produce and breads, some crafty things for the tourists, and further down, the military antiques, maps, boots, racks of coats and ugly ‘80s denim.
Last time here, on a table littered with old compasses, car manuals and shoe boxes fluttering with old maps, he’d seen a nice pamphlet of upper Yorkshire walks, late ‘20s by the look, stiff paper with no rips on the folds. On the front was a line drawing of a man in knickerbockers, flat cap and plaid jumper, leaning on a hiking stick, at the foot of a hill. The fellow selling the old maps was thin, with gently curved shoulders and a lined, contoured face. He’d worn wiry silver glasses, and perched on a small folding camp stool at the back of his table. Nicholas had nearly bought the old Yorkshire map for Dad.
Now, he pushed aside the thought that it was stupid, being here at the market. Dodging, Dad would have called it. He knew he’d need to go back later, would need to arrange things. Need to call Rob.
At the corner cash machine, he impolitely severed the queue to make his way up the road. He bumped a table full of black felt fedoras, avoiding a college girl with bright blue hair who’d stopped and turned too suddenly. Her clothes smelled unwashed, not terrible, but like an old towel. She was by herself, humming something that might have been Wings or Joni Mitchell or Talking Heads. Hard to say.
He moved gradually past the tables. One was filled with an assortment of glassware that glinted and flashed sunny winks. A toy seller had some nice tin lorries, still in their old boxes, and a Six Million Dollar Man boardgame – little pictures of Steve Austin in space and underwater and crashing through a brick wall. Further up, some silverware that looked like it could have been his Gran’s. A set of slender cake forks in a little wooden case, one missing. Silver Downton Abbey-ish butter dishes and trays with stamped flowers and swirls. Breakfast m’lord.
Forcibly banishing another memory – the lumpy bed sheet and the impression that Dad was just shrinking and vanishing in front of him like a cruel slow-motion conjurer’s trick – he stopped by a bookseller’s table. It was a horizontal library of mostly ‘50s hardcovers. Their faded dust-jackets would have once been jauntily colourful. They were Somerset Maugham and Graham Greene and Agatha Christie and James Hilton early reissues, with little stylised pictures of ships and vines and swords and airmen on some of the spines. Someone, different people, once chose each of these from a bookshop shelf, years ago, and read them on the Underground or a shaking bus, on their sofa or in their garden if the sun was out, or at the seaside in July with the page corners lifting in the salt breeze.
He eyed trestles cluttered with lead-light lampshades, tea sets, commemorative Queen Mother picture plates and biscuit tins, old shop signs for Chef Sauce and Adnams Ale, brass magnifying glasses, mother-of-pearl haircombs, mantle clocks and travel clocks in neat folding cases, brush-and-razor shave kits – shit, it’d be down to him to sort out Dad’s flat, all his things, with Rob off in New-fucking-Zealand – tankards and goblets, jars of Roman coins, and old Railway holiday posters for Exmouth, St Ives, Clacton-on-Sea, Ilkley, Newquay, Aberystwyth.
Now, a stall with steamer trunks, satchels and hatboxes, dark leather suitcases stacked like the buildings of a little city. He thought of their decades of trajectories, bumpings on rough railway platforms, swayings in ship cabins, the thousands of openings and closings, packings and unpackings, their paths a web of red lines on a map in his mind, to end up here in a market. On the table were vintage cameras and telescopes in wood boxes and leather cases. A pair of travel binoculars caught his eye. He held them, two little squat dwarves joined at the hip, feeling their brassy weight. The case was weathered and tan-coloured, with a claret-coloured felt lining…. Now he imagined birdwatching from a grassy hide beside a stone bridge, or maybe … maybe a railway holiday in the North…. Christ, anything to forget that awful little room with its cold floor and plastic water jug and the blurred corridor sounds, and knowing that of all the rooms and beds and flats and bedsits and hammocks and dorms and tents and bunks and mates’ sofas Dad had been in, this was where he finished up.

Richard Rebel is a writer and school teacher living on the south coast of New South Wales, Australia. His writing appeared in three 2019 Clarendon House anthologies. In 2017 he attended One Story's Sirenland Writers' Conference in Positano, Italy. He is working on a short story collection.