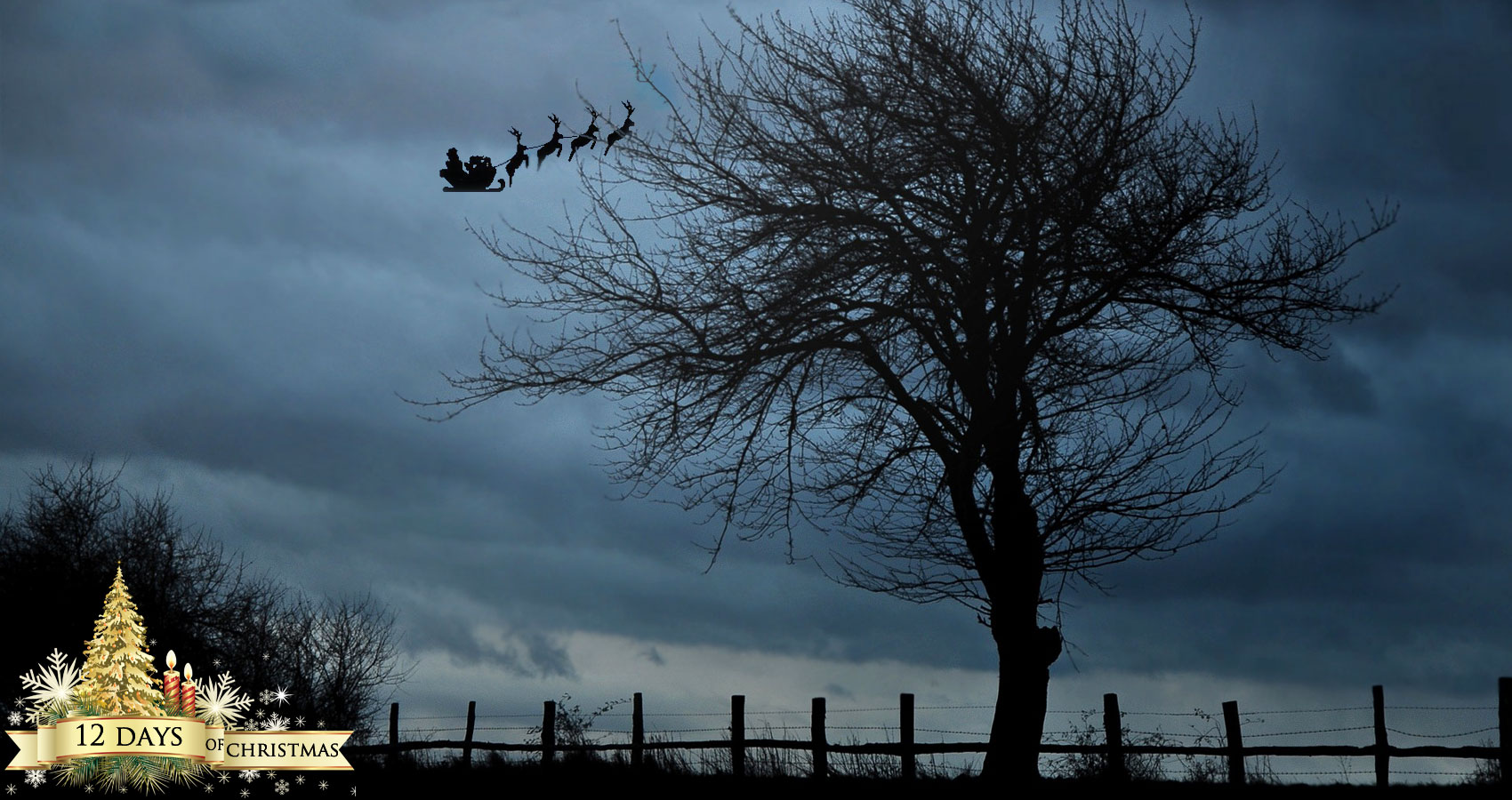 “This isn’t how I planned to spend Christmas Eve,” I said, my head emerging from a bin bag.

“Me neither,” said Santa Claus, poking a stick into a green plastic dustbin. Looking up with a cheeky grin, he said, “I mean, spending the evening with your head in a sack full of domestic refuse: it’s rubbish, isn’t it?”

He laughed loudly, a long jovial guffaw. “Get it?” He winked at me. “It’s rubbish!” He was extremely pleased with his own joke and laughed again; it was almost a full ‘ho-ho-ho’ this time.

“Very funny,” I said, wiping traces of squishy, decomposing food from my fingers. “But I can’t find anything.”

The novelty and humor of finding a man dressed as Father Christmas in my front garden was rapidly wearing off. It was late and I had a lot if preparations left to do. I didn’t have time for this. My family was waiting at my parents’ house yet I still hadn’t finished the toy train set I’d been secretly building for my son, Michael. I wasn’t very competent and my expected construction date had been postponed more times than a South American world cup venue. Now I risked not being ready for kick off tomorrow morning. My wife had already phoned twice, asking where I was and why I’d missed dinner. She also said Michael had been upset by a TV weather bulletin. His biggest festive wish was to make a snowman on Christmas morning but only rain was forecast. If I didn’t get back to my workshop, he’d get nothing he wanted tomorrow. Preparations for the big day were all going wrong.

“Tell me again how you lost your keys?” I said, my frustration evident in my voice.

“On my way next door, I threw away my Starbucks cup,” Santa explained. My neighbor was a flashy banker – it was just like him to arrange such a visit for his kids. “I must have accidently binned my keys too.”

The porch lights lit up my uninvited guest like an actor on a stage. He was in his sixties. His standard-issue costume of red with white trim was frayed and stained. A single button strained to contain his pot belly. Strands of silver hair poked out from beneath his conical hat. His big white beard looked genuine – even if it was probably stuck on with theatrical glue. His cheeks had a rosy glow and, when he spoke, I got a waft of whisky.

He pulled a hip flask from his jacket and took a huge slug, wiping his lips on his sleeve.

It was then that I saw the yellow ribbon sticking out of his pocket; he must have dislodged it when he took out the flask. I leaned forward and tugged. Out came a bunch of keys, tinkling like sleigh bells.

“By Jove, you’ve found them!” Santa patted me heartily, and rather too firmly, on the back. “Fantastic. Fantastic.” He took the proffered keys. “I really appreciate your help, son. Come with me and I’ll find you something in the old ‘sleigh’, by way of a thank you.”

And with that, he strode forcefully, if somewhat erratically, out of my driveway and round the corner.

“What make is the sleigh?” I called out. “Volkswagen? Ford?” I hurried after him, wondering what the drunken old fool was up to now.
“Honestly, you don’t need…”

As I rounded the corner, I stopped dead.

Parked at the side of the road under a streetlight was a huge wooden sleigh. It was a sturdy construction with long, curly runners, ornate golden handles and a wide bench covered in multi-colored silk pillows. Harnessed to the front stood four reindeer – real-life, living, breathing, farting reindeer. As they stomped the ground, clouds of steam mushroomed from their nostrils into the cold night air.

“Wow,” I said. Even for my neighbor, this was extravagant. It must have cost a fortune.

On the back of the festive vehicle was a basket containing an assortment of brown sacks. Muttering to himself, Santa pulled out a box about three feet long and a foot wide, wrapped in bright paper and ribbon with a big red bow. It was as if he’d drawn a rabbit out of a hat, because the parcel appeared to be twice as big as the sack it had come from.

I was impressed, so I said, “I’m impressed”.

“Tricks of the trade,” he said, handing over the present. “This is for Michael: a train set. He’ll love it.”

I was aghast but managed to mumble “That’s very generous.”

As he tied the sack closed, he said, “Give up on the DIY presents – it’s a nice thought, but your skills lie elsewhere.”

He hauled himself aboard and grabbed the reins.

As the sleigh clattered and clopped down the street, I inspected the brightly wrapped gift and wondered how my neighbor’s company could afford a Santa impersonator with reindeer to visit on Christmas Eve.

Only then did it dawn on me. How did the old boy know my son’s name? And I never told him I was building a train set.

I looked up just as the reindeer started climbing an invisible path into the sky. Hooves clawed at the air as they rose towards a gap in the clouds where stars twinkled by a yellowy half-moon. The runners left a vapor trail of ice particles that tinkled ever so softly, like chime bells in a breeze. Santa waved over his shoulder then tugged on the reins, banked sharply and disappeared behind a cloud.

I laughed out loud. And at that moment, it started to snow. Thousands of huge, fluffy flakes floated silently to the ground, quickly covering the land in a thick, white duvet that sparkled in the moonlight.

I knew then that it was going to be a magical Christmas, a Christmas like no other, and the best Christmas ever.

PJ is a British writer whose fiction is inspired by history, nature and human nature. He’s lived in Switzerland for 20 years but still takes milk in his tea. He has had short stories published online and in print in outlets such as 50-word stories, Dream Catcher, Edify Fiction, Flash Fiction Magazine, Flash Frontier, STORGY, The Fiction Pool, The Sunlight Press and several anthologies. He has won prizes in Writing Magazine, Writers’ Forum Magazine and The Short Story and been placed in several other competitions.