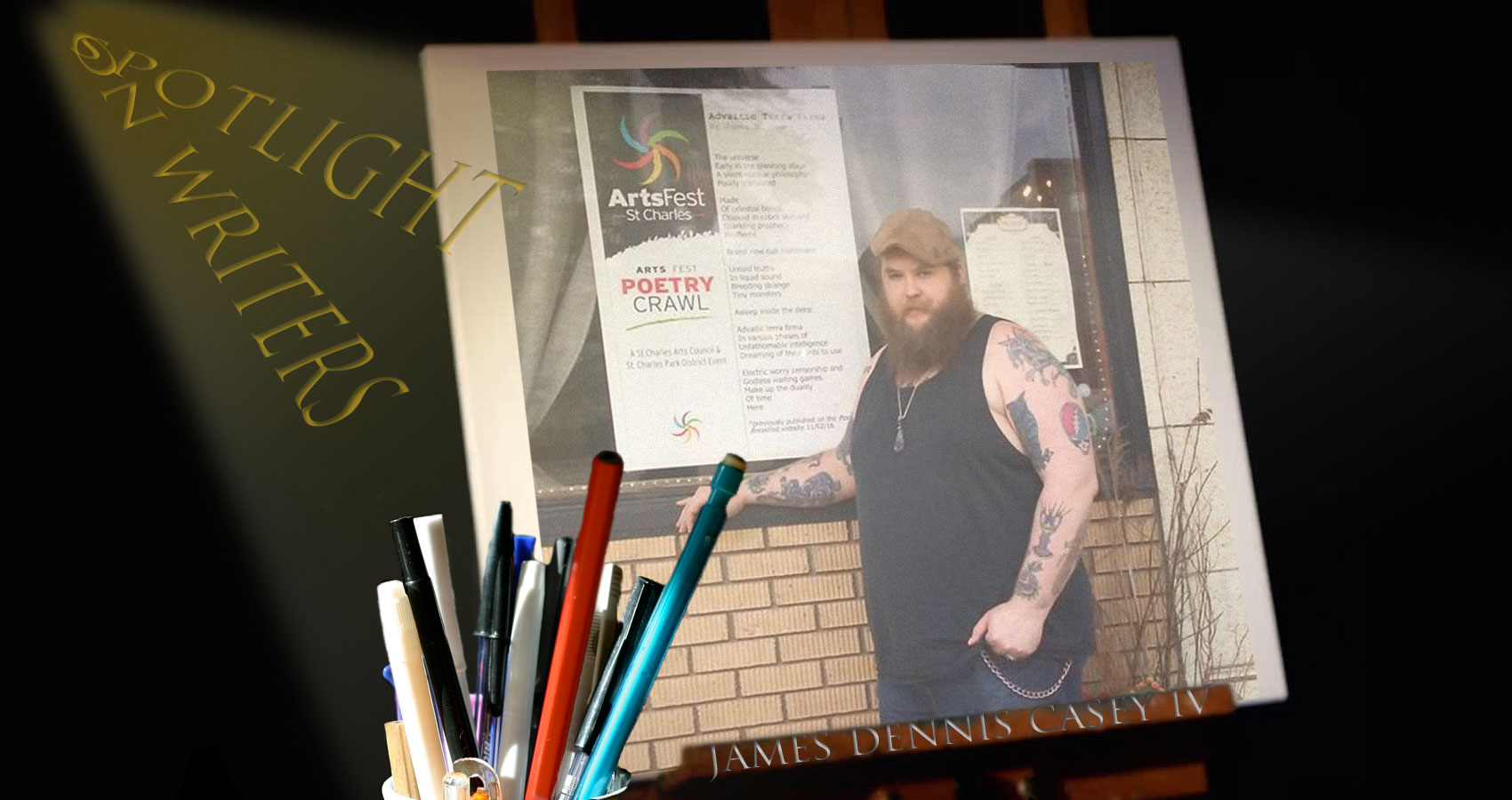 Well, I could go back to the very beginning and give you the whole story about my Great-Grandfather, James D. Casey Sr. immigrating to New Orleans from Ireland and falling in love with a Cajun woman, but it’s a long story so I’ll give you the summed up version. I was born in Colorado where my Mother was from, grew up in Louisiana after being brought to New Orleans at the age of one because it was where my Pop was from, eventually moved to Mississippi because my Grandmother left a house to the Casey family on some property she owned there, and currently I live in Illinois with my beautiful Muse, our goofy old dog, and two black cats. I guess the best way to describe me is a mutt. I have Irish, Cajun, Blackfoot Native American, and German blood.

Home is such a subjective noun, I have many places I call home, even a handful of people, and I love certain things about each one. I love Colorado for its majestic beauty. Love Louisiana for its multifaceted gem of a culture, the food, the music, the people, the festive atmosphere. Love Mississippi for its mixture of country backroads and bayous and Gulf of Mexico beachfront properties. Love Illinois because I’ve met some great fellow poets and friends here, and there’s an outstanding poetry & art scene that I’ve been graciously welcomed into. Love my Muse because nobody knows me better, and she puts up with all of my craziness that comes with being an old poetic soul, and all the stipulations and stereotypes attached to it, I do have my vices. I love my Daughter and my Pop because they will always be a part of me. The list goes on and on. Home means many things to me, sometimes it isn’t a place, it can also be two eyes and a beating heart.

What turns me on creatively, let’s see, it varies depending on my mood I suppose. I’m a lover of music, of which I have an eclectic taste so we can start there. A lot of my work has to do with all things magick in nature, and galaxies, the multiverse, also Luna and Death are both creative muses of mine. I tend to steer clear of the squishy rhyming love poetry when I write. I guess I should throw alcohol in the mix too, I don’t drink as often as I used to but I still indulge because it gets my creative juices flowing, even a bit of fine herb from time to time if we’re being honest. As I said, it varies, changes with my mood.

My favorite word is perseverance. Something my Pop always told me that has been a driving factor in all of my endeavors was that perseverance was important. As for using it in a sentence, I actually wrote a poem a couple years back that contained the line

‘Thoughts and dreams are things that can be willed into fruition, perseverance is the key.’

I try not to let things bother me, but I do have a few pet peeves. The main two are this meme poem trend I’ve been seeing get more and more popular lately, and poets that constantly post selfies with their poetry. I just feel like it cheapens the craft. Now, I have to admit, I have made a few meme poems for my Instagram account, but they’re not just pretty images that I steal online and slather a few words onto. I usually draw something or take a photo myself before making one. It’s worth more to me if you create something yourself from scratch instead of putting together bits and pieces of someone else’s work to call it your own. That’s why I’m not a big fan of it, and the selfies just get on my nerves. We get it, we know you think you’re pretty, let the words speak for themselves.

Several different things define me. First and foremost I’m a poet, but add Gonzo Outlaw Magick Poet Pirate Madman Philosopher to that and you get a broader painted picture of who I am. I stand for the true underdogs, the broken, lost, abandoned souls that get lost in the white noise. That is who James Dennis Casey IV is in his truest form. The rest will be remembered as myths and legends.

James D. Casey IV is the author of seven full-length collections of poetry, founder and editor-in-chief of Cajun Mutt Press, and extensively published online and in print by small press venues and literary magazines internationally. He is a southern poet with roots in Louisiana & Mississippi, currently residing in Illinois with his Beautiful Muse, their idiot dog, and two black magick cats.