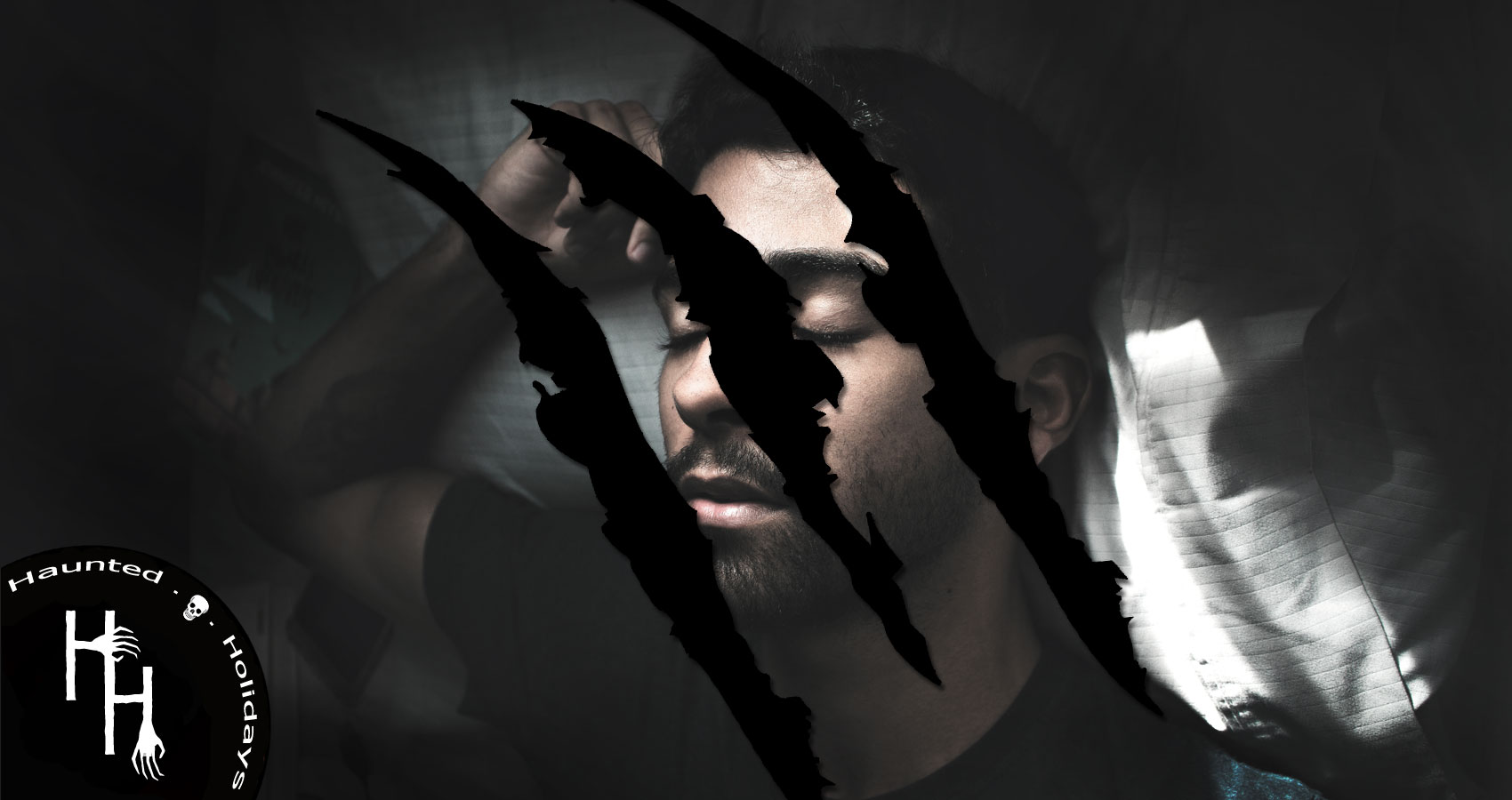 It started with images in dreams. Every night. Three claws at the end of long arms. Massive head with proportionally massive teeth. It was a hairy beast.
Clarke awoke in a sweat. This dream had the beast killing a woman. A woman that looked like a secretary at work. He didn’t know what to do but knew he had to do something. He didn’t really have anyone he could talk with about this. Maybe he’d talk to someone at work. That would be his goal that day. Jim was the nicest person at work and never once had Jim made fun of him.
Clark never had a girlfriend. Geeky, chubby, poor complexion, his discount-store clothes always looked it; he had never been considered ‘boyfriend material.’
Clark carried his tray from the counter, maybe he stared too long at Janie, the prettiest secretary, maybe he didn’t, but she made a wry face, then looked away. Definitely, Janie was the woman being killed by the beast. None of the women at work, even the older ones, would sit at his cafeteria table, so he ate alone. Always alone. His online friends on the gaming sites assured him that’s the way it is. Despite this, Clark thought he would brave the closest table. It had a mix of ages and genders sitting at it, all laughing and smiling.
Janie looked up from the table and saw him approaching. Her eyes opened even wider and she elbowed Jim, the sales support manager next to her. By the time he reached the table, all conversation had stopped, and the smiles were forced on some, absent on others.
Jim smiled a fake smile. Hello, Clark is it? Come to join us?”
Clark looked at his shoes and mumbled, “Uh, no, I um, just wanted to talk to someone about a dream.” Janie and two others stood up, grabbed their trays, and left the table.
Jim nodded and said, “Well, sit down and tell all.”
“I’ll stand, if that’s okay.”
“Suit yourself.”
Clark took a deep breath. “I have been having this recurring dream.” Clark shifted his feet, not knowing how much he should reveal. “It’s about a hairy beast with claws, but this time it was killing a woman.” Everyone at the table had straightened up and was leaning away from him. He decided that now would not be a good time to tell them that the woman being killed looked like Janie.
“Christ” was whispered by one of the older women who looked away.
Clark looked at the faces of the uneasy people and focused on Jim. “I just was, um, wondering if anyone had scary dreams like that or what it might mean.”
Socially awkward, Clark had never before spoken to any of the women at the table and only to Jim once, almost a year ago. Everyone but Jim stood and backed away mumbling, leaving their trays on the table. Clark couldn’t hear everything, but he did make out “freakin’ whack job.”
Jim looked at his folded hands on the table and then back at Clark. “Have you talked to someone about this?”
“Just you.”
“No, Clark, a professional. This sounds like deep-seated issues. HR should be able to arrange some sessions with a counselor.”
“No way. People here already think I’m weird—look how they all left the table. I don’t want to go to counseling, that will make it worse. I’m trying to save a woman from being killed.”
“Clark, it’s a dream, and a disturbing one. I think you should talk to someone else about this.”
“Thanks for listening, Jim.” Clark returned to his table. That didn’t go well.

Clark settled into his game chair ready to start his evening routine when something near the doorway caught his eye. It was the beast. The game controller fell from his hand onto the floor. He looked at the controller for a second, then back at the beast, but it was gone. He leaned over and picked up the controller.
Before, the beast had been limited to dreams, but here it was in his apartment. Clark stood up and slowly walked through the doorway into the kitchen and grabbed a knife.
Settled back into his chair with the knife at the ready, he started his evening. A short time later, the beast appeared again. Clark grabbed the knife and stared at the beast. His attention was distracted by the monitor as his on-screen player character was killed. When he looked back, the beast was gone.
Clark looked at the kitchen knife and then to where the beast has stood. The knife would be worthless as a weapon against a beast that size. He got up and rooted around his closet and found the only thing he inherited from his parents, a .357 snub nose, a lethal gun at a short distance. Clarke loaded it and put on the shoulder holster. Not too bulky. He grabbed a larger zippered jacket from his fatter days so the weapon would not be noticeable.
Nearly as upset about being eliminated in the multiuser game as seeing the beast, he couldn’t settle down or get back into gaming. His player character was “The Rescuer,” well known on the site as the one that saves damsels in distress. He was “Hero” on another gaming site. A legend. How many women wouldn’t be saved tonight? More victims of the beast. Finally, he chose an early bed.
That night’s dream was more vivid than before. Kill the beast. He heard the words clear as day. The clock read 2:15 am. Clark rolled over and went back to sleep only to have the same dream, but the woman was getting more desperate to escape the beast’s grip.

The following morning, as he drove to work, he patted his chest and felt the reassuring security of the gun. The beast would not be killing today. He would be a hero if he saved her.
Everyone was sneaking glances at him and he could hear the whispers when he passed. More so than usual. Twice that morning, he saw Janie leaning over and whispering to Jim at his desk, then staring at him. One time she pointed to his white socks. Jim seemed more interested in looking down her shirt than listening to her.
After lunch, Jim made several trips to the photocopier, which was right next to Janie’s desk. The end of the day was nearing, and Clark heard the voice “Kill the beast.” He looked up and saw the beast at Janie’s desk.
He stood up, felt his chest for the weapon, and started to unzip his coat. Greg nodded at him as he left Janie’s desk. The beast disappeared as quickly as it appeared. Clark sat back down and could feel his heart rate lessen.
As his car started for his trip home, the words he heard were crystal clear. “Kill the beast.” He patted the slight bulge on the left side of his chest and smiled. While he was driving, the words were repeating. Over and over again. He was no longer smiling.
Then the beast appeared in the crosswalk. He stared at the beast crossing the road and started to unzip his jacket but stopped when the light turned green. He jammed the accelerator pedal to the floor and veered toward the beast. The big Buick easily hopped the curb and kept barreling ahead. The beast never saw it coming. Legs and arms with claws went flying through the air, along with a café sandwich board advertising the daily special.
A thump back onto the road and Clark was on his way home, his good deed done. Tonight, he would sleep well.

Clark paused the online game when he heard the knock on the door. Four large police officers were at the door. “Clark Rafford?”
“Yes, that’s me.”
“Is that your Buick in the driveway?”
“Yes, it was my father’s car before he died.”
“Were you driving it today between 4 and 6 pm?
“Yes, I was. Home from work. And I’ll pay for the café sign. That’s not a problem.”
“Please step out of the house.”
When he turned around to shut the door, his face was held against it by a large forearm and his arm was being wrenched around behind him.
“Both hands, behind your back.”
He heard a slight grunt when one of the officers clamped the handcuffs extra tight on his wrists.
He was spun around and read his rights. “I’ll pay for the sign, but I killed the beast.”
The largest officer stopped and asked, “What?”
“I killed the hairy beast with the long claws.”
“No, you killed a nineteen-year-old man. In cold blood. It’s Halloween, lots of people are wearing costumes.