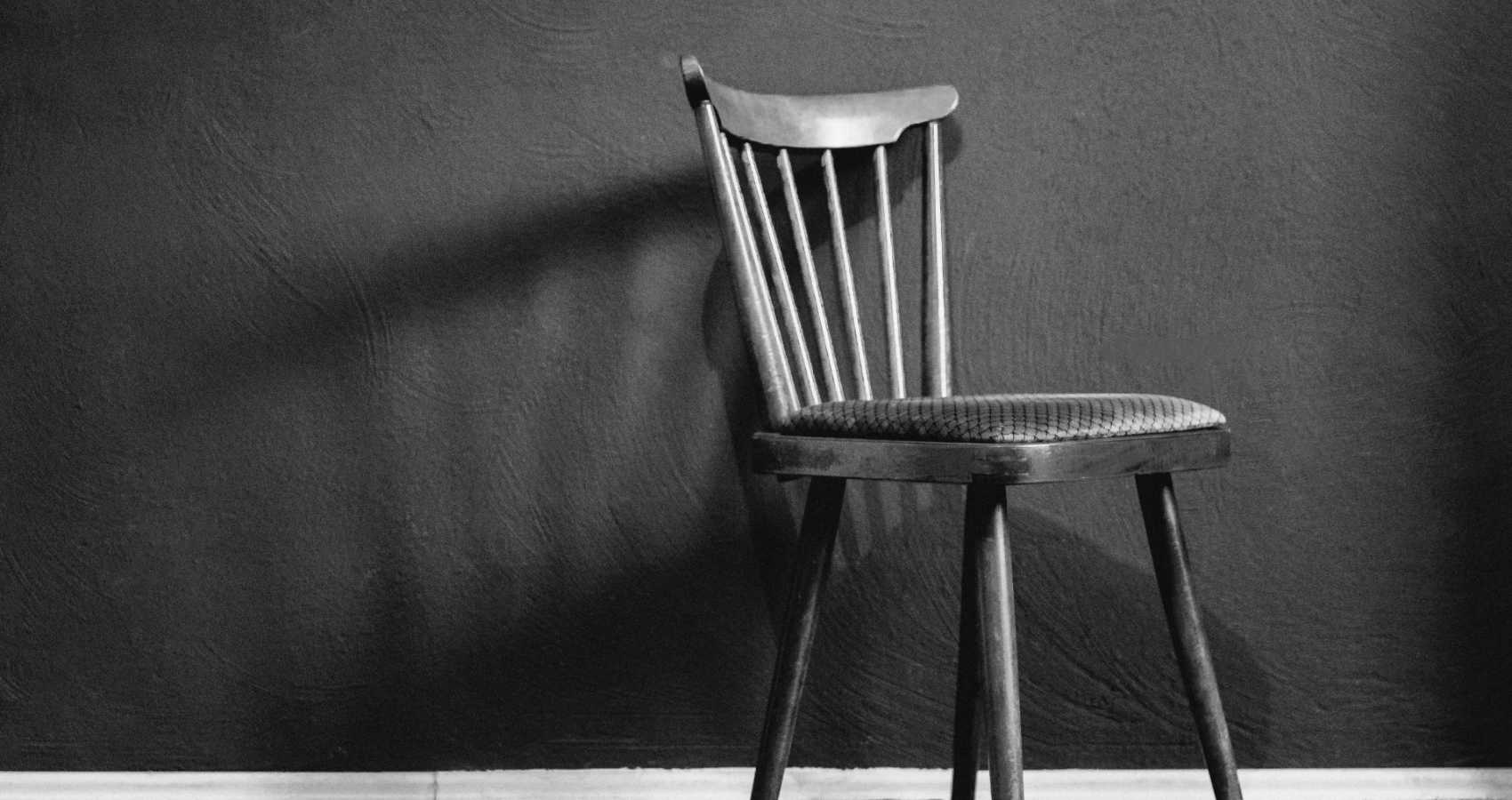 I have examined your entitlement to State Pension Contributory and have decided that you are due this pension from 24/03/2022.

There is reassurance in it, relief at added security. At the same time, it provokes. The pomposity. What individual has such power to decide the nature and quality of her future? She tosses the document onto the table, releasing an impatient sigh. Having completed fifteen-pages of tedious tracking back through her past employments, and then posted the result off into a vacuum of lengthy silence, this feels abrupt almost arbitrary in its conclusion.

She sits at one end of the table, which stretches empty across the room. This was her father’s seat, handed down in absentia. The seat of austere and cantankerous authority. Currently disordered kitchen spreads beyond the divider on one side, commodious picture window dominates the other. She chooses the latter, easing into the roiling blue of the bay and the mottled greenery of the forest beyond. She had carried that view with her. Fretfully turning back to the letter, she seeks out that powerful ‘I’. The reverse side reveals one Johnathan Fottrell as author and benefactor.

‘What’s with the melancholy, June? You should be pleased with the outcome, energised even. There were no favours in it, but I did punch in the hours for you.’ There is patronising overfamiliarity suddenly present at the other end of the table.

‘Don’t be looking for gratitude, Johnathan. Purpose and direction traded in for pastimes and inertia, and all thanks to your wondrous and very personal munificence. Where’s the gain in that?’

‘Seize the chance, June. Take it easy, explore, be with friends. A grateful state rewards your years of service. The world’s your oyster now. Go for a reboot, be something different, do something new.’ There is rebuke, sat once more in her mother’s old position.

‘I’ve trekked the trails, done the amateur theatrics, joined the writing group, gone along with the tea and biscuits. Nothing by way of a pearl in that whiling away of time.’

‘You’re too big on purpose. I’ll put money that’s the Catholic upbringing. You’re placed here on god’s good earth for a purpose, isn’t that it? And there I thought you were well over all that.’ There is disdain in the arrogant posture draped over the chair.

‘Maybe it’s the likes of you has me this way. With your demands to be employment ready, actively seeking work, and then to be furnishing decades of uninterrupted labour for my final gratuity. And there I thought your welfare system was about wellbeing, not feeding the dark satanic mills.’

Neither are right, both are right. She isn’t sure anymore, just knows defeat when it stares her in the face. There might have been no choice, her time was up, once of an age. Still, she had needed a change either way. She saw little point anymore in readying children to live in a dying world. Purpose as a teacher had been hollowed out, become like a giant tree eaten away from the inside, ready to keel over in the first storm. Change, though, was pursued in a rush, without any dream for where it should lead her. That furnished the perfect recipe for spiralling apathy.

Her gaze touches on the copper pan, hung on the kitchen wall. There’s still presence in that, even in tarnished redundancy. She can see her mother making the jam, smell it even. There was satisfaction in such industry. Seemed to be at least, to her as childish observer. There was the proud display of cooling jars, the surreptitious tastings. Was there fulfilment in it? She never knew her mother, her inner monologues. A sense of duty certainly shaped her, duty that she had insistently impressed on her daughter. Maybe, her mother merely laboured under the very snares she had furiously warned her daughter off, those impositions and responsibilities required of a girl just by birth.

‘What was the plan, June? What did you hope to find back here? Gloom’s not good for anyone, you know. You need to get chasing that goal, whatever it is.’

‘There’s no let-up to your prying, is there Johnathan? It only gets ever more personal and intrusive. The times we’re in leave little space for any plans. You just manage the cards you’re dealt.’ She’s tiring of him, bad temper intrudes as customary at her end of the table.

‘Whatever drove you away from here, it kept you away till your parents were well buried. You’d put all this behind you, determined you were. Now, you’ve corralled yourself all over again, and of your own free will.’

‘There was no running away in it, just needed something different to what they had, to the norms that bound them. That’s any child’s right. It’s called self-determination, the right to be free of the ghosts that haunt and distort one’s parents.’ She turns quarrelsome.

‘Your mother sought something different for you, from you. But in this narrow future you’re wedded to, all you’re doing is recreating her bounded past.’

‘Live long enough and you become your parents, isn’t that what they say? Don’t be bringing my mother into it, she knew what was to be avoided, but she had little to offer on what needed embracing.’ She spits the words out at him.

In truth, the forces at play drove rather than drew her back. Some were practical some less so. Some conscious, others not. Most immediate was a teacher’s pension that could not match the demands of a Dublin landlord. Less tangible was an outside world and its afflictions crushing in on her, to a point she could not cope with and had no response for. Safe haven was sought from despondency as much as from the vultures. It became available in the unkempt remains of a childhood home, a place not normally associated with such respite.

She looks back to the bay for solace. The natural world is ever generous that way. The flicker of wings and spurt of song of a goldfinch landing on the wire above. The lethargic wave of dishevelled grass along the cliff under a gust of wind. That outburst of forest over there, with those impenetrable beasts silently communing in plain sight. Her wonder in resplendent nature only grew with her despair at its destruction. Even here, in its apparent abundance, there was no escape from that disquiet.

‘I’m looking at you and all I see is a blank page. You were always big on imagination with the students, June. What happened your own capacity to dream?’

‘Not much of the raw material around now to encourage dreaming, Johnathan. If it’s not resurgent pandemic, it’s nuclear threats, and then, if there’s any space left, it’s the planet burning. I can’t even listen to the news anymore.’

‘Get out of that head of yours and back into the world outside. Stop listening and start doing, you’ve just been given the space and time for that.’

‘What to do? With what energy? I can’t even finish a book these days. See that pile there on the divider, that’s my to do list. And I was always a reader.’

‘Time for re-invention. It was the spectacle out that window there that brought you back. Well it’s all under pressure, isn’t it? June the activist. What would she look like? What would she do? What might she achieve? Nature has no voice at the table, it needs its urgent advocates.’

‘Johnathan the firebrand bureaucrat. Who would have thought? Though, you should know, nature is not voiceless. Those trees out there, they commune, they can alert each other to danger, they actually express…’

She’s driven him off, in going cerebral and reverting to teacher mode. Maybe he was never there, just like the others. A moment to aggravate and get her worked up, then they’re off. Silence reasserts its familiarity around her.

Please quote your PPS Number (found at the top of this letter) in any contact with the Department. Yours sincerely, Johnathan Fottrell.

She folds the letter deliberately, and shoves it under the old phone on the side table, location of preference for such documents. Time
for her morning walk, be with those trees across the bay, then her coffee and scone in Travara. An activist…at her age? Maybe there’s a snare there that her mother never got a chance to warn of, those impositions and requirement of age. She shakes her head wearily.