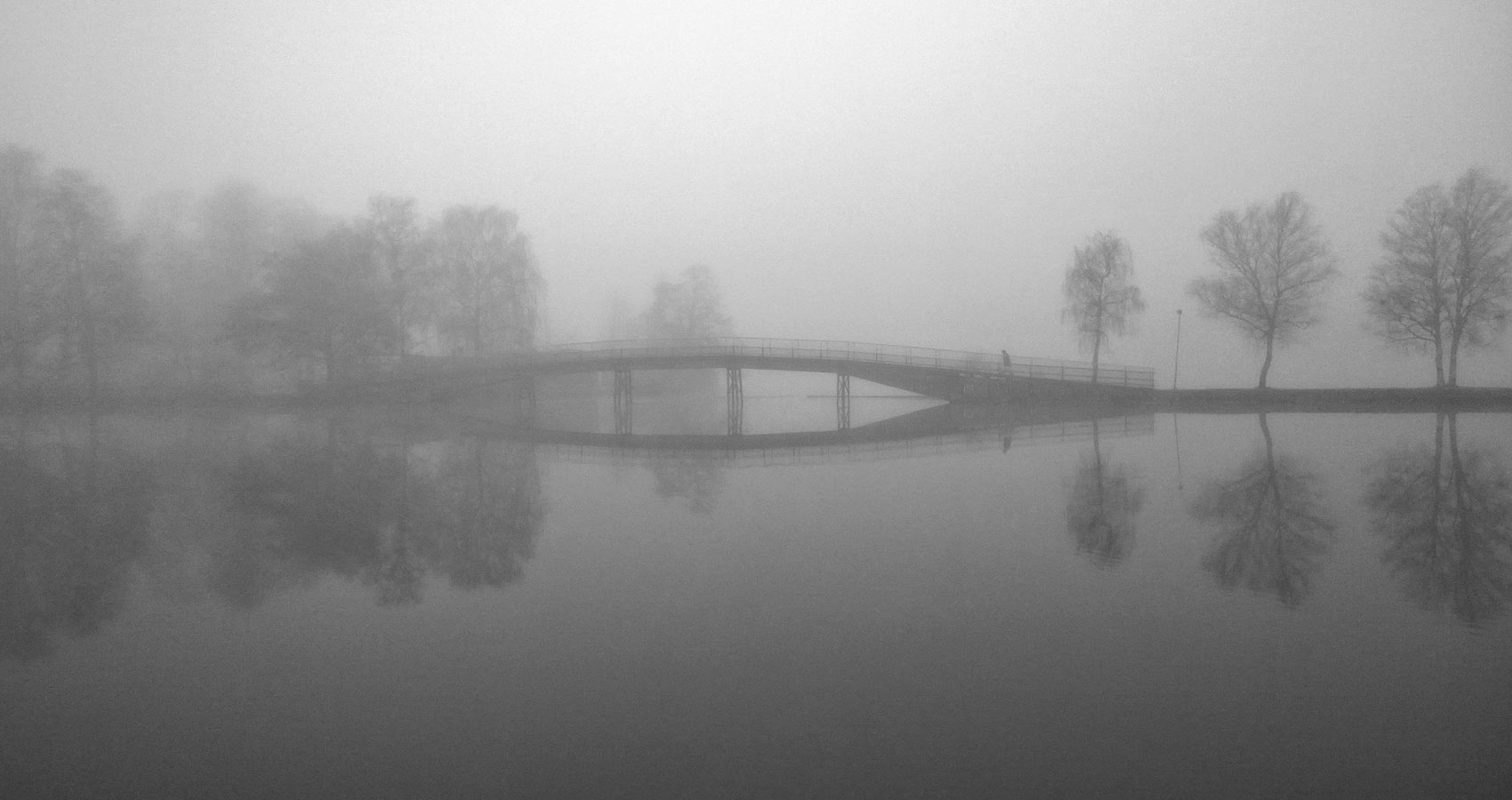 “Well, sheriff it’s kinda’ hard to say jist what that damn thing was,” Korne said as he pulled down thoughtfully on his lantern jaw. “It was gettin’ on dusk and me and Tom here was headin’ on home with our stringers of trout,” he said matter of factly as he held up a rusty, odoriferous metal chandelier of goggle-eyed dead fish.

“Hmm… I see,” Sheriff Calder answered with a hammy palm not so furtively covering his eyes and nose. “Perhaps you can try and describe this ‘thing’ you saw disappearing under that ol’ Gray River Bridge yonder,” Calder tried as he hooked a thumb over his shoulder at the looming gray stone bridge in the background.

Korne shrugged his red and black plaid wool gingham shoulders and then looked over at his fishing partner Tom Sawmeill. Sawmeill might just as well has been some wooden cigar store indian with his fishing rod held out before him in a kind of military parade rest fashion. He could but shake his head as if he didn’t want any part of this crazy country can-of-worms conversation.

“Whatever this creature was sheriff, there simply ain’t no denyin’ it was ‘huge’ and it was ‘also’, it seems to me, fully aware of what it was all about and doin’ way out here in these scraggly woods and such,” Korne declared as he slung his silver stringer of fish over his shoulder. “And, frankly, I ain’t really too damn sure if any of us truly wants or ‘needs’ to find out jist what this thing was or ‘is’ sheriff… that is if you want the truth.”

“Well, I’m a duly appointed officer of the law in this here county and I’m all about gettin’ to the ‘truth’ on mysterious matters such as this one here,” Calder laid out as he removed his blue and gold trimmed police cap. “What about you Tom? You’re surely well respected around these parts for your shoot-from-the-hip appraisal of things and things. What’s your take on all this monster business?” Calder tried as he lit a cigarette which was his registered local lawman habit when confronting interrogation circumstances such as these.

The crickets and cicadas had long since begun their intimidating nightly clicking concert there just on the very edge of the indifferent skeletal forest that surrounded them. A full circle, owl eyed moon was easing up into position far off on the horizon. Night was coming on like some inevitable, cold dark shroud.

Sheriff Calder had, after a series of subtle yet official suggestions, managed to convince the two fishermen to join him beneath the decidedly morose and ominous gray stone bridge in question.

“Is it okay if we leave our stringers of fish down here in the damp creek leaves sheriff? I mean my wife is suspicious enough on me already. I don’t want to go home smellin’ like some place over in town where I shouldn’t have never been or ‘be’ fer that matter… comprende?”

Calder snickered a bit and then gave his approval. He snapped on his elongated aluminum police flashlight and they all three did a tentative about-face. Oddly, they stooped a bit, perhaps hunkered is a better word, as they made their way back to the silent arching bridge.

Sheriff Calder unsnapped the clasp that held fast his police revolver in its holster… just in case.

The men were totally unaware and, unfortunately, unprepared for what was about to happen.

“Well gentlemen, we’ve been around, both up and down this spooky bridge for the better part of ten minutes now,” Calder declared as he stopped short just there at the very midway point of the now pitch dark bridge looming all around them. He played his dying flashlight beam one more time all around and about the vaulted stone block interior stretching far above them.

“Yes, it’s certainly very odd I must say,” Korne replied as he followed the pale beam of the light as the sheriff painted it across the bridge’s stone rafter blocks far above them. “I don’t know what to say sheriff. Maybe me and ol’ Tom here was jist seein’ thi–”

The trio turned concurrently, their collective mouths formed tiny circles like the openings to some long ago abandoned backyard birdhouse.

“Jesus Christ!” Calder shouted out as he shot his flashlight’s beam far off and away at the up curving base of the bridge. “What in the hell was ‘that’?”

The two fishermen were speechless and even a blind man could see that they were terribly afraid.
There was not only one monstrous figure, but several and they each and all appeared to be carrying large boulders or stones. They moved in quite quickly with long determined strides. The sheriff fumbled for his revolver, but in transition from his holster it slipped from his hand and fell down to the slippery pebble stones of the creek bed.

The towering hairy-red figures were closing in on them with a purpose. It was inevitable. Sawmeill made a hurried sign of the cross atop his sweating forehead. They all three turned to run for their lives, but it was far to late.

The first large stone caught Calder high up in his back at the base of his skull. He hit the creek bed hard. The trickling, dirty water passed all around and about his lifeless body. The two fishermen dropped right then and there to their knees and waited for…