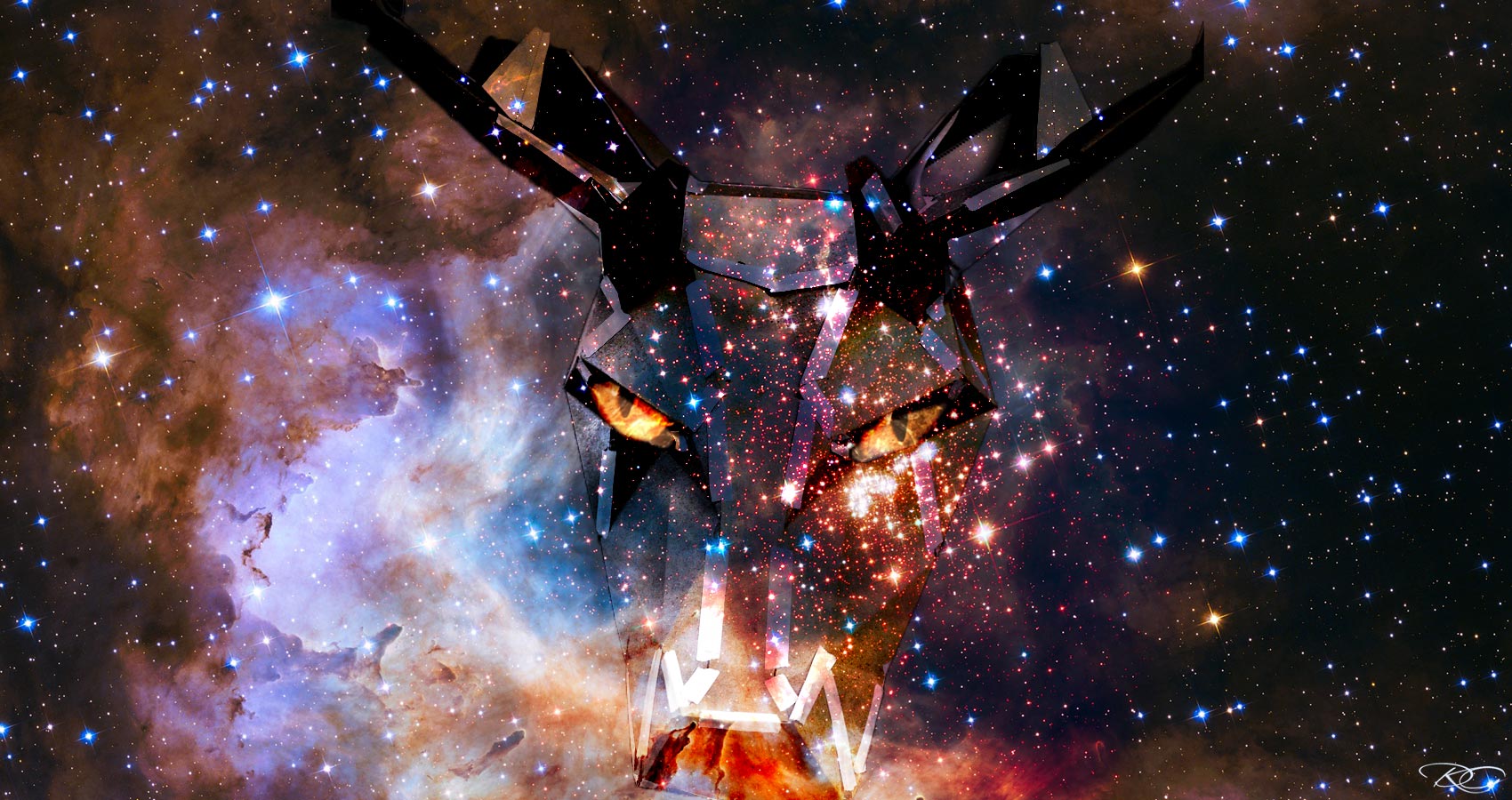 The Keeper of The Universe

The Keeper of The Universe

The silver net flexed and swayed as the solar wind threaded its way between the strands. In the centre, black as a moonless night lurked the Keeper of the Universe. Its inky bejewelled body sparkled, a band of rubies ran along its spine and diamonds adorned its horned mask.
After the first great intergalactic war, the Council of Species decided that a Keeper would be appointed. An immortal, to stand guard and enforce peace between planets, galaxies, and life forms to prevent another outbreak of fighting.
And so it had done with fairness and impartiality – in solitude. Now it was wounded by the passage of time, it was caught in the trap of its own wisdom and by the constant demands. The Keeper sent a message to the universe seeking relief from the burden laid on it.
In the distance a beam of light appeared. It grew brighter and brighter as the object approached and the Keeper felt the power of a new presence.
“You sought my aid, Keeper,” a voice emerged from a glowing ball of cobalt-blue gas.
“I sought your aid? Would you elaborate?”
“You sent a plea for release from this burden. And I have come in answer.”
“How will you help?”
“We will become one and conquer all that stands before us. We will be invincible.”
“It is not the role of the Keeper to be a Ruler. Go!” It waved one black sparkling claw and the gas ball vanished in fiery cloud, the energy tearing a strand of the net. The Keeper sighed and busied itself with mending.
As the millennia passed, it grew increasingly fatigued.
At the outer reaches of the nebula, another presence appeared moving purposefully towards the web. It was emerald green, its glistening shell sparkling in starlight.
“I come to offer aid, to keep the balance between species,” it said waving an enamelled claw at the occupant of the web.
The Keeper listened but saw evil and destruction beneath the façade, a heart harder than diamonds and disappointed it sent the intruder into space.
There were small cracks appearing along the bejewelled body of the Keeper and within it desperation and loneliness grew. It listened less to the arguments placed before it, grew intolerant of difference and withdrew from the universe. The peace it had overseen began to fracture and small wars erupted.
Unaided, embattled, it sensed rather than saw a soft radiance. A warmth wrapped around its shell healing the cracks, restoring its patience and its self-belief. The jewels began to sparkle again, as its strength returned.
“You are the Keeper of the Universe,” a voice said, “I am here to help you light the way.”
Diamond studded eyes looked for the sound and saw only the moon. As it studied the golden orb, an affectionate presence filled its mind. The Keeper realised it had never been alone. It could continue to guard the universe with wisdom and courage, bathed in the light and love of the moon.