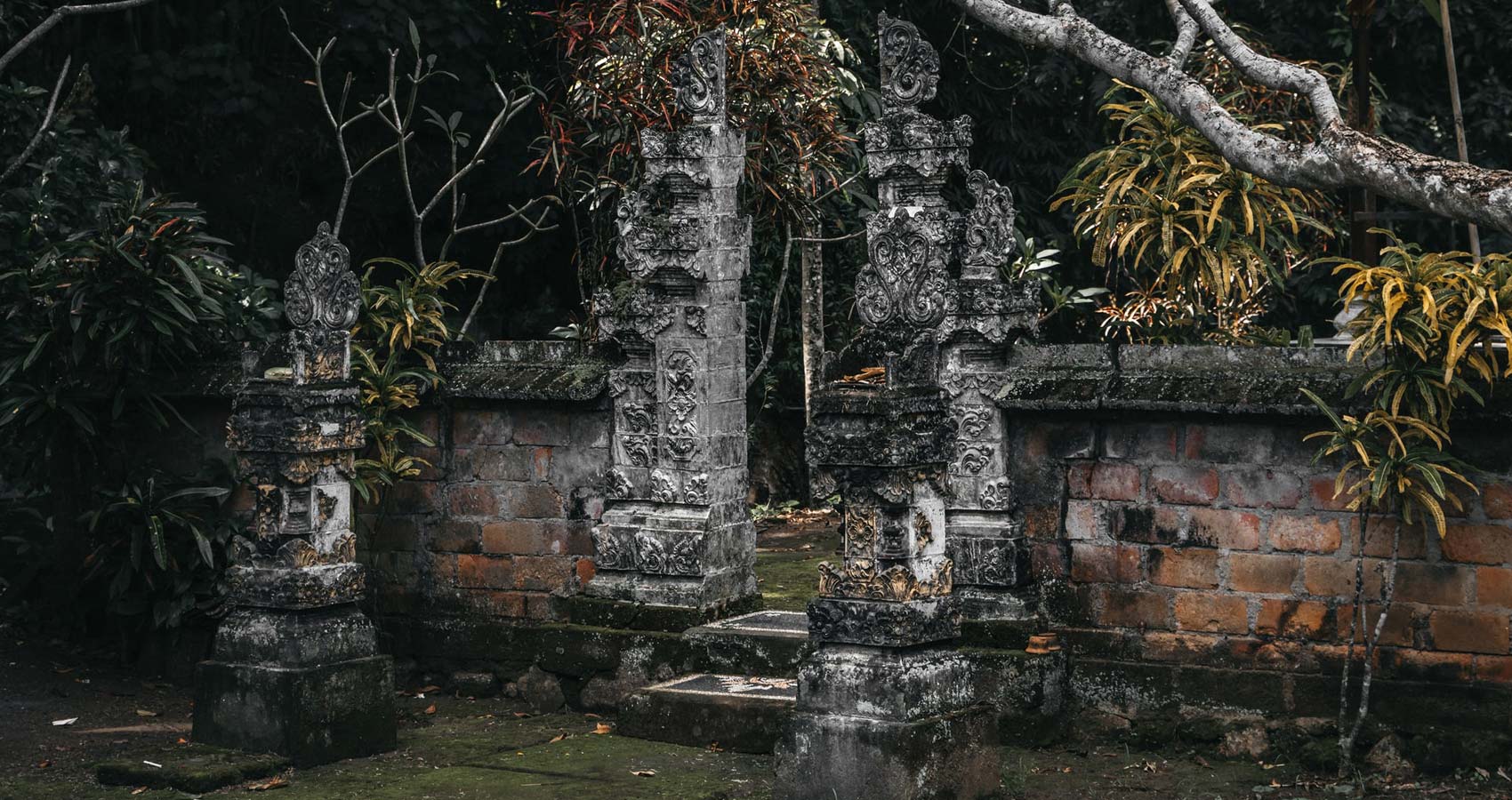 It wasn’t words that lay on me the tales of a forgotten past,
Neither the book held on tightly by the guide,
Nor were the fairly maintained rock slabs at the fore-
A preface to the history beyond the rusty portals,
Chipped at the corners where the birds and cats and raccoons sat to get a stable view,
That so closely washed over me the musty wet odour of the bygones.
“What was it?” inquired an unassuming voice.
Ah! It was that walk!
A single walk and I picked up pieces along the way,
Those scraps of lives lived in secret,
Hidden from the nimble rays of dawn-

Sounds of partly dry skeletal leaves crumbling under my weight,
That paced me with a silent yet fiery beloved,
Furtively heading towards the peach coloured pillars of the temple ahead,
Nonchalantly playing out in her mind
What flames would see
Brisk annihilation in the dusk.

The slender branches swayed rhythmically,
Hand in hand with the distant beats
Of the drums.
Like a dancer’s swaying hips
Willingly forcing a thrust
At every quivering beat.

The innocent laughter of a child
Heard at some distance,
Heading towards the lesser known ruins,
Grasping at round pebbles
To barter with others like him,
But for pearl of value not seen.

I think I see an old soul sitting by the walls,
The rotting pieces staring at the sun,
And she, looking about her,
Waiting for someone,
To pause and break the silence.
A pact made for a decade, ran into
A century of void.

That cursed moment, what could it be,
That warranted such endurance
Of quiet trodden steps, invisible and lone?
“Do you want to know?” more a plea than a query
In her eyes, circled with creases of skin,
Papery and thin.
Somewhere in the folds of age,
Lay a mire of memories of the ache,
Gnawing at a body of time ahead.
“Do you?” she held on.
I walked ahead,
The weight of those memories pulling
Me at my heels.
No, I could not carry a spare.

One that felt my resilience,
Has not seen my insides,
Where the reminiscences weigh like an
Anchor I do not want under.
What is that inviolable element,
In these seemingly sturdy pillars and the make,
Which held it fast at mere damage
And not thin dust?
Does the burden of the past not change its fragmented existence?
Or are these ghosts from the past
Intimate souvenirs to my soul
That stick on to me as I take that walk?
Could these echoes be my Achilles’ heel?

I'm a highly motivated educator and professional with a love for writing. I'm a voracious reader and versatile with words. Having taught English language, linguistics, English literature and World literature at undergraduate level and school level, I'm well acquainted with different writing techniques (research/academic), variety of fictional writing from each literary age, and the socio-political atmosphere that affects the production of each genre (fiction, poetry, autobiography). I have also worked as an editor for HelpAge India and proofread and edited articles for senior sections in my previous role as a school teacher. As a coordinator for Children’s International Film Festival (CIFF) for Grade 10 at OOEHS (Dubai, UAE), my responsibilities were inclusive of (but not limited to) collating, editing and submitting scripts for short films.