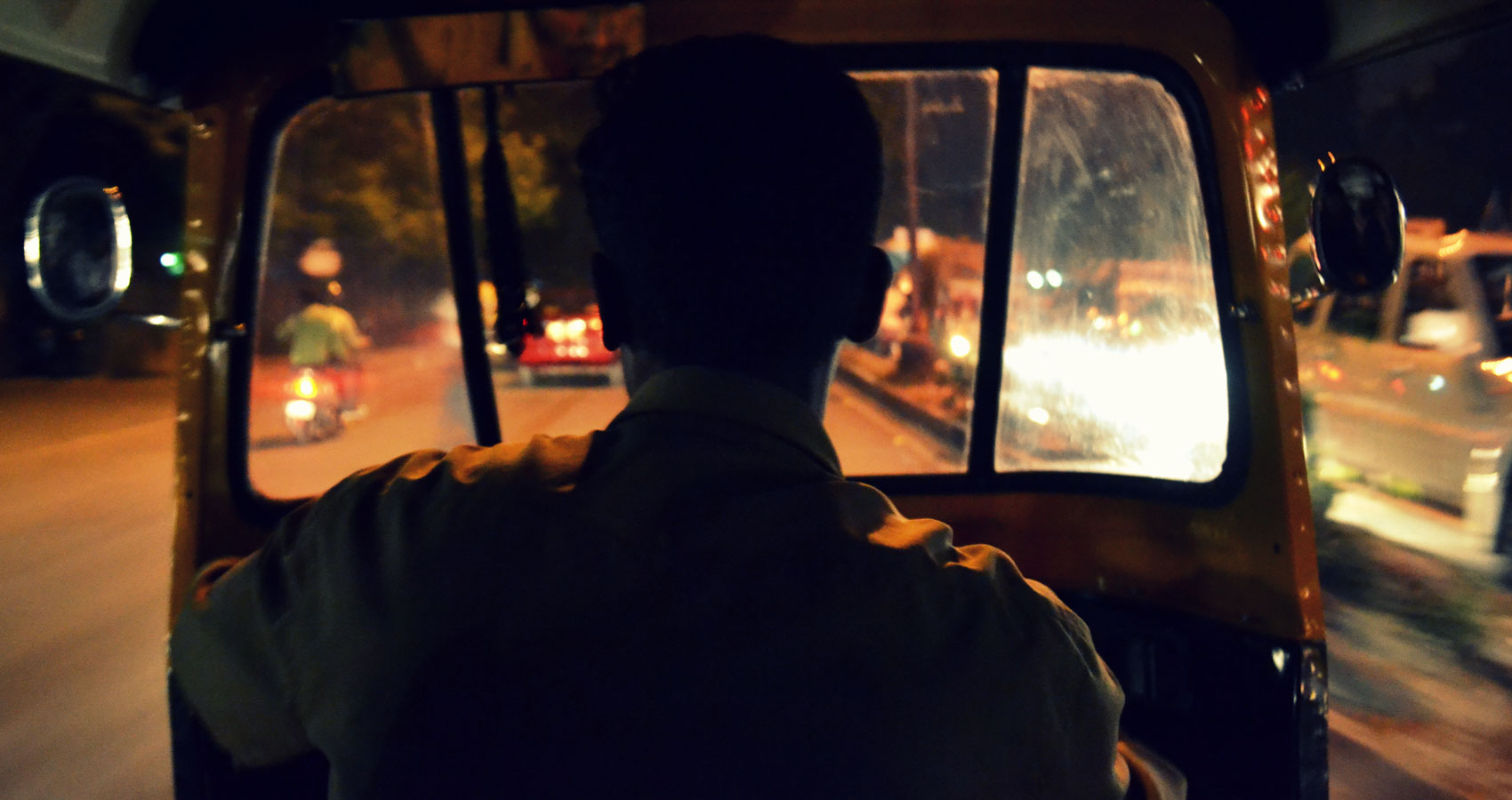 “Unbelievable! A woman dancing naked on the Charminar!! How did she even get up there?” Hyderabad Commissioner of Police Arvind Kumar was agitated. He was watching the CC TV footage his deputy Govinda Rao had brought.

“Sir, she came in a cab around 2:30 a.m. That’s the time when people movement in the area is the minimum. Regarding the locks, one was broken and the second, she opened herself. A talented lady, she is,” Govinda said.

“What about our patrol?” Arvind asked.

“No one was there at that time,” Govinda replied.

“Darn, how long was she there?”

“Sir, about 15 minutes. She removed her clothes, let her hair loose and danced like mad. Apparently this is called Zumba dance.”

“What about the second footage?” Arvind asked.

“She was at the Necklace Road. All the outlets on Eat Street were closed at that time. She sat and…”

Govinda knew what Arvind was asking, so he replied before Arvind could complete. “No sir, here she was half-naked. She removed only her top and sat on the ground cross-legged. She would stare at the waters, close her eyes as if she was meditating, then open her eyes and stare at the waters again. Did that routine for nearly an hour.”

“She got up, wore her top and walked away.”

“Did she take another cab?” Arvind asked.

“No sir, she took an auto-rickshaw,” Govinda said.

“You said she came to Charminar in a cab.”

“Then we know her name and where she lives,” Arvind said.

“Yes, sir. Would you like to see those and other details?” Govinda asked.

“No.” Arvind leaned back, closed his eyes and rubbed his forehead. “What was she up to?” he muttered.

On the get go as usual, there was no time to waste!

She dashed out of the house, desperately trying to get her flats on her feet as she does. She knew she does a little too much at a time, but she could barely help herself. If she was going to conquer the traffic in any way, she must get going. She bolted to the bus stop and in her hurry started to pace as she waited for the bus. Her frantic pace earned her looks from others, but she was too busy pacing to notice.

She pulled back the hair tendrils that flew across her face in response to the gentle breeze of the dawn. She blew violently at the truant strands as she got ready to worm her way through the many people looking at the bus coming down the road. If she was going to make it to work just early enough, she needed to get on this bus. As the bus pulled to a stop, she slithered expertly around people and before anyone could notice, there she was, in the bus.

Another busy day and as usual, orders were flying all around. It was almost noon and she had neither sat down for more than an hour nor had she eaten breakfast. Lunch didn’t look feasible. Her bladder was on the verge of bursting, yet she could barely spare the time to go to the bathroom. Her eyes watered as her boss yelled at her for the umpteenth time that day.

Sometimes she let herself forget that she has a dual major in Philosophy and Psychology and an MBA with specialization in Human Resources management. She could effortlessly lecture on free will or nihilism and apply Maslow Theory or Theory of Constraints at work. But no one saw her as more than a dumb doll and an eye candy.

College life was the genuine life and corporate life was a fake life. Here, she had neither a social life nor did she get any chance to develop or grow interests. Everything about her revolved around the job and the only thing apart from the job she did was to send money to her old, widowed mother who lived in her hometown taking care of her autistic brother.

No one however thought that she was human too and that she had thresholds. Maybe they did, no one just thought it was today.

Today, there was a venture capitalist team from Mumbai who could invest in the software startup she works with and as usual she was running around to make sure everything was in place.

Throughout the day distasteful comments about female bodies and physique were thrown into the conversation with fake American accents at regular intervals. Everyone seemed to find them funny and even her boss was obviously sucking up to the investors.

Was it just an accident that one of the investors’ hand brushed against her breasts as she leaned in to pass a document? She let it go. But then, it happened once more. The wretched hands this time not just brushed but grabbed her ass on the pretext of pushing a chair, as she was walking by in the dimly lit conference room to set the projector right. Appalled, she gasped. The boss was sitting next chair and she clearly noticed it. For a brief moment, she looked at her boss expecting some kind of support. All she got was a look from her that said she should deal with it. This was the last straw that broke the camel’s back.

She had given her boss her all, for five years. She had cancelled going to family functions, slept in the office, worked weekends just to accommodate her needs but never for once had she received appreciation. Stupid, idiot boss does not even know that they were being taken for a ride in the investment deal. The exit conditions, particularly the one on page 72, Part III, Section B, clause 5.2 of the investment agreement were just god awful. Working for such bosses made life so miserable and hell.

She was remorseful and indignant. Money was important but not the main goal; she wanted to be herself and apply her knowledge and skills. This job was clearly not the channel towards that. Worse, it had become the limiting factor. Theory of Constraints, she muttered to herself. Identify your biggest problem and get rid of it. Screw the job.

She went to her cubicle with a single tear running down her face. It took her just a couple of minutes to shoot the resignation email to her boss with a copy to HR. She also mentioned she wouldn’t come to work from tomorrow. With swift movements, she grabbed her coat and headed home.

With a straight face, she walked past her room-mate who was sitting in the hall watching the TV. She shrugged out of her work clothes and sashayed into the bathroom where she took her time to scrub herself. She donned herself in a pretty pink floral tee top and a boyshorts panty. She walked out of the flat, past her nonchalant room-mate, with an air of confidence.

She sat in the cab she had ordered. Tonight, she would be just going to consider herself and do things that she and only she deserved.  She remembered her Zumba training and that she used to practise for fun and fitness. She had given it up as she could not get time in that goddamn job. Whatever happened to all such enjoyments of her life? She needed to sit stoically and let the important things swell up to the forefront of her mind.

She was bold enough to try some zany things. She closed her eyes and took deep breaths as if letting loose of her alter ego that she had kept tamed all the while. It would be one wild night and nothing would stop her. To a pub first. It was time to get drunk.

After a couple of minutes, Arvind Kumar opened his eyes and said, “So, what do you think she was up to? Why had she done that?”

Govinda Rao was ready for the question. “Maybe she was on drugs, sir. Maybe she has depression. Drugs and depression are so widespread these days in the city,” he said.

“Has this gotten out there?”

“No sir, there is no murmur anywhere, even on social media, about the dance or meditation. I think we have been lucky no one had recorded it.”

“In case some one has the video and spreads it around, the ministers may ask why this was not investigated. We will also face the heat on the security lapse,” Govinda said sounding a bit worried.

“Of course, we will tell the minister we will start the investigation. Next, we will probably do some counselling to the lady without charges. Insofar as the absence of our guys that night, weren’t we all busy with the Ivanka Trump visit? That was our highest priority for the past few days. And we had to give our full focus on that visit. That’s the way things have to be managed in any organization. You put all your resources on your biggest problem until it no longer is the biggest problem,” Arvind said and paused. “That will be enough explanation to the minister.”

Arvind said, “If at all the video appears in the media, I will take care of the heat from the media and the ministers, you don’t worry about it.”

Govinda Rao came out of the room, thankful for having such a wonderful boss. Working for such bosses makes life so beautiful.