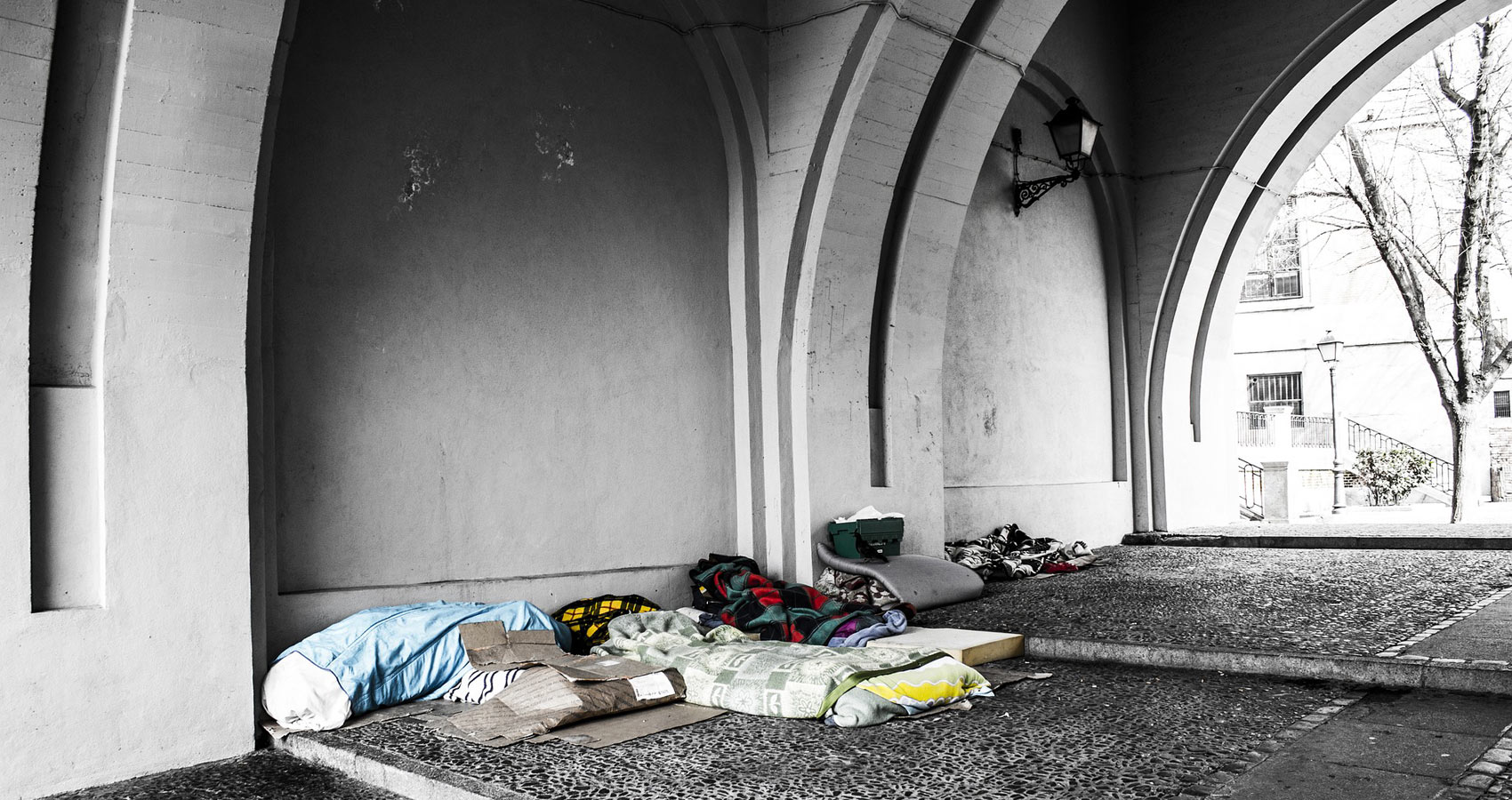 Truck tires roll heavily over the bridge. Like a roll of thunder during a dry storm. Wheels slap over gaps in the bitumen. Above me pebbles of gravel skip and oil spills blotch asphalt. I could stroll through the gutter as if beachcombing. I’d pick up glittering fragments of shattered windscreens, cigarette butts able to be gasped down further and shreds of tires filled with heat and stink of rubber.
I sleep under one of the spans. Now and then it trembles as softly as a heart murmur. Clothes stick to me as if veins and skin grew into them. At night I huddle under the blankets the Salvation Army left. Last Friday night their van pulled up in the usual place. I waited in line. Two young women volunteering from a high school passed me a polystyrene cup of soup and two bread rolls. The night was cold. I joked I didn’t know whether to drink the soup or soak my feet in it.
I didn’t fall far to end up here. Three years ago I was paying off a mortgage. Used to tell my wife a little hardening of the arteries was nothing when you can live in a five bedroom home with views to shining blue horizons. What followed was a five step plan to end a marriage. Firstly you lose your job. Then you fight over no money. You bandage over failure with bravado. Then the bravado caves in. After that you leave. By then there is nothing to leave anyway. Everything is repossessed.
I slept in streets convinced it would only be a few nights at first. But it’s been awhile now. Long enough to know where to sleep and stay dry from dew. Enough to know which churches have heating so I can sit in the pews even though God is about as real as the Easter Bunny. Enough to know which skip bins aren’t locked so I can rummage for food. Which homeless shelters I can sleep at without being bashed. The people who might give me a couple of dollars if I ask them nicely. Which cops leave me alone. Where workers gather and leave behind half cups of coffee or partly finished bottles of water. Maybe a barely started cigarette if I’m lucky.
I mark out my place under the bridge. Roll my blanket up by day. All of us understand no one can take another person’s place. Unless someone dies. Most people during the day leave me alone. They in fact take looping detours of me, stepping out onto roads if they have to. It’s only the young men late at night that worry me. Their voices are harsh, shrieking then wheezing with laughter. Can tell from their walking how drunk they are. They zigzag along pavements, colliding with each other and swaying propped together in a huddle before breaking apart and moving off. Occasionally they come into where we sleep. They stand over us, calling us pieces of shit. I lie as still as an insect when you touch it. Usually they stagger off. Occasionally they rummage through my belongings. Clothes are pulled out and strewn around. Perhaps my blanket is dragged off. Any leftover bottles of wine taken.
“Gasoline!” they shout when they find the wine. They tip it into their mouths. It’s not worth fighting for. The worst ones launch a few kicks into where I lie. I turn my back into them, hunching forward so that their blows glance off where my kidneys are. I rarely go back to sleep after that.

I always love daylight. That means I’m safe again. Daylight is at its purest before traffic builds and people in business dress file by. It shines softly into spaces where air feels damp and chilled during the night. The first cars are taxis and police vehicles. If I sleep into the morning a cop will sometimes prod me to check whether I’ve died. I move slightly, just enough to demonstrate I’m alive. Sometimes they bend over me, asking if I’m okay while their shadow falls across me.
Last week as I sat in the warming sun school children passed. A couple of teachers hurried the kids along. Faces turned towards me, some curious, others afraid. I wanted to call out to them. Wanted to say I was like you once. Under these clothes and in my heart I still am. I wouldn’t speak in a nasty way but enough for them to hear and carry it with them, into their homes and futures.
In the end I didn’t. I slumped back, watching them walk away in a careless line. Even after they passed out of sight I could hear their steps, crooked and meandering, voices breaking in adolescence.