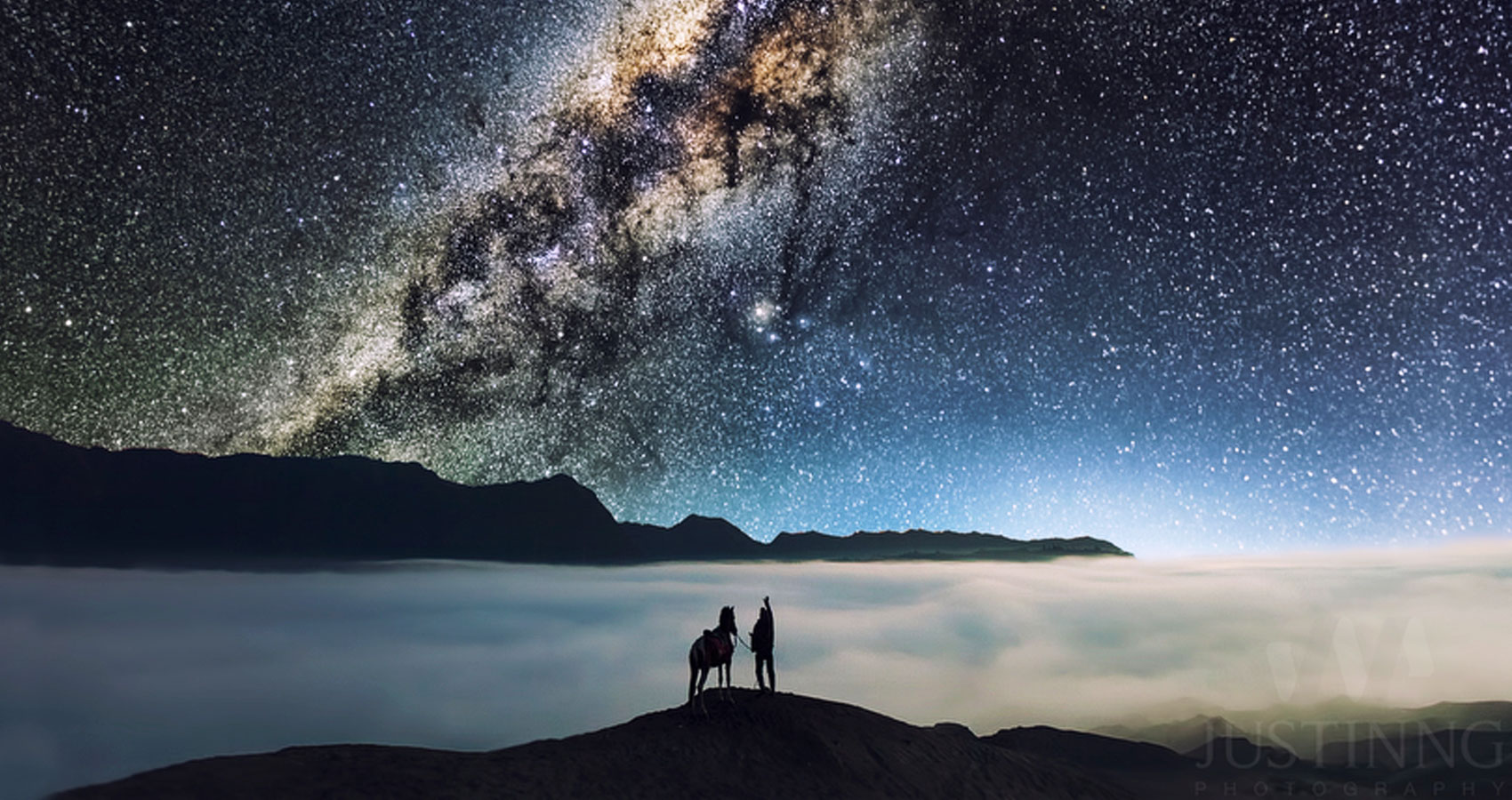 Under The Hanging Road

Under the Hanging Road

The rider and horse moved onto the narrow path into the wilderness, to Cloud Peak,
In the mountains of the Big Horn sheep, to where the Old Ones hold council.

Her hooves were sure–More sure than his heart. This
She sensed, so the big brown mare gave him loan of hers.

Her breath blew in gusts as the path steepened and the air thinned.
The shadows of the pines grew darker, the air chilled.

The day sank into the west behind the peaks, hour on hour, step by step,
Into the camp of tomorrows, into the undiscovered country.

Up through tendrils of mist that writhed around the trees as though alive.
The spirits of the ancestors hovered at the edge of sight and climbed with them,

The mare seemed to see them, at times. She nickered, and tossed her head.
The rider knew she saw what he could not, so he called out as though to friends.

“Where have you come from?” the rider called out in the old tongue.
“Where are you going?”

The only answer was a whisper and a disturbance in the mist,
A rushing of invisible things upwards, toward the peaks in twilight.

The word had been passed, as things are in the spirit world.
The rider was moving up and into the past,

And the trees, the tall trees, seemed wreathed in phantoms,
As though time travelers growing up from the millennial ooze.

In those times, counted in the many hundreds of centuries.
To when the People first stood here, and up there, upon the sacred mountain,

Made sacred because of the soul-work of climbing into the clouds,
Sacred because small men yearned to rise above the world below,

To stand under the Hanging Road with all pride left along the way,
To learn if the owls carried messages from the Camp of the Dead.

The rhythmic metallic thump of shod hooves on granite and dirt
Was now echoing, very faintly, with the distant sound of drums.

Soft at first, the drumming grew in time and harmony,
And the rider heard the singing, the ancient, lilting songs of the Old Ones

Rising and falling in penetrating tenor tones, but always in time
With the steady sounds of the hooves on rock, and of the drums.

He inhaled the drumming, let the singing weave itself into his chest,
Feeling them pull on deep parts of himself, speak peace to his wounded heart.

Through half-closed eyes shadowy forms walked in and among the
Lodgepole pines that crowded the path. They were in their

Summer loincloths and low moccasins, and the drumming
Seemed to both come from them and yet also from the very air.

The mists swirled thick and thin, formed into the shapes of warriors,
And dissolved, the air pulsing softly to the singing, to the rhythms of the drums.

A figure with jet-black hair long down its back, separated from the others and came close.
A scabbard of intricate bead work crossed the chest, a buffalo skull on its head.

They locked eyes and he saw that the other’s were empty sockets, black
As the night sky, but as he looked they filled with stars.

The stars of the Hanging Road, this messenger’s eyes,
Two black portals that grew and merged with the vastness above.

The singing and the chanting swelled. He let his body roll with the rhythm of
The drums and voices, and with the undulation of the horse’s back under him.

Then they escaped the tree line, into a meadow broad and dark, shining
Under the whirling cold light of a billion-billion stars,

Stretching away in all directions, the infinity of heaven displayed
In all its awful and humbling glory. The night was absolutely

Clear and pure, clean and still, the isolation absolute, yet
He entered into the solitude and felt his soul soaring up,

Freed at last from earthly things, flying up into the infinite
Oneness below and around, under the Hanging Road.

The mare stopped on her own, perhaps feeling the faintest
Lightening of her burden, knowing she had come to the end.

The drums stopped, too, and the absolute silence calmed her,
She sniffed the air, her ears twitched and listened, and she bent to the sweet grass to eat.

Above, a messenger streaked across the face of the Deep, rejoicing.
A lost soul had been on a long journey, but was finally home.