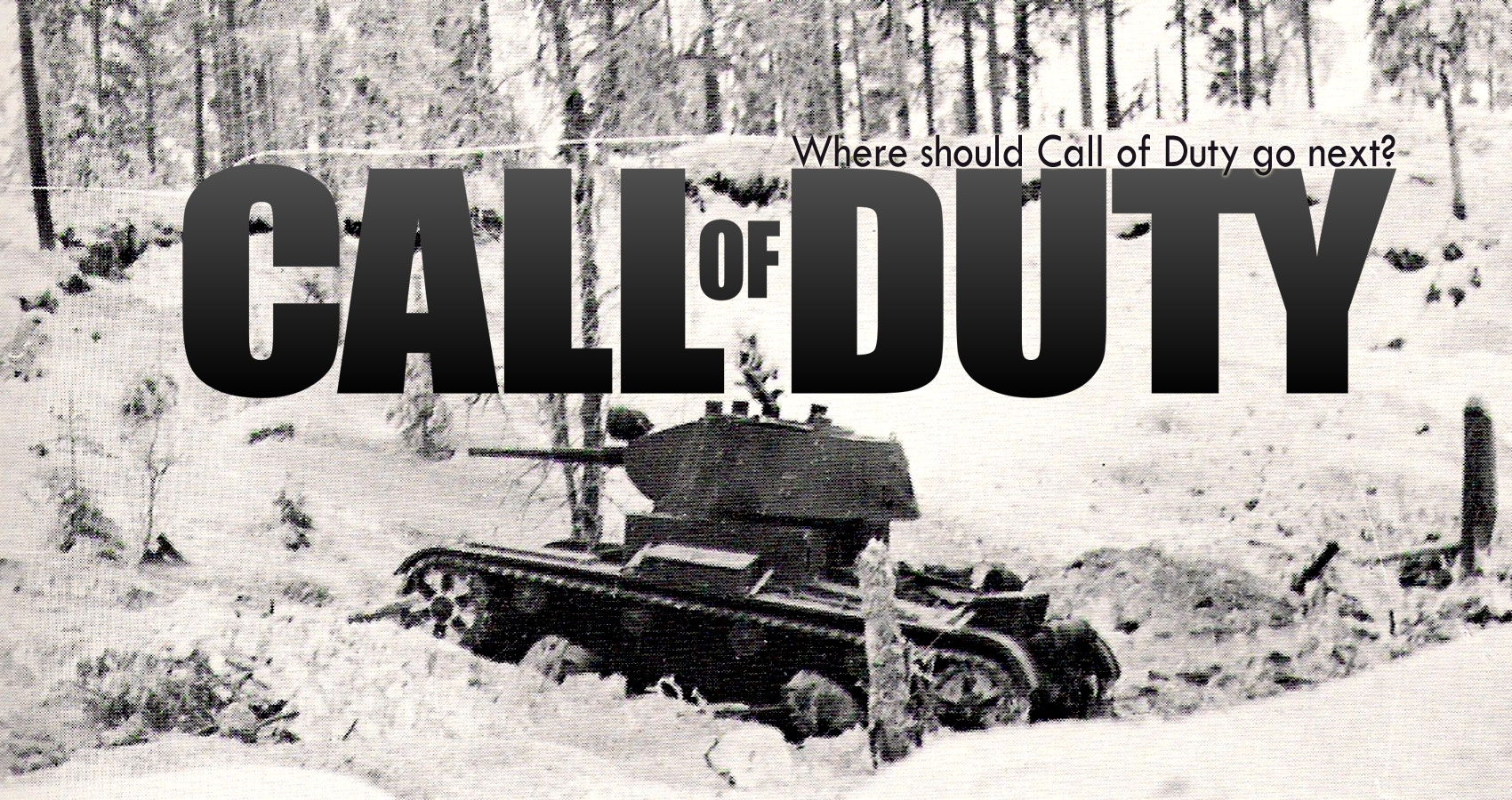 Where Should Call Of Duty Go Next?

Where should Call of Duty go next?

With cheers and jeers, Activision’s Billion dollar series Call of Duty is going back to its well planted roots, World War Two, after the last two games Black Ops III and Infinite Warfare despite having decent reviews by critics, were torn apart by many fans and crucified by some “gamer celebs” from YouTube. While some fans seem to be split on the upcoming game, titled Call of Duty: WWII, some are optimistic that the game will do well while some fear this is a hasty afterthought made by developers to try to compete with the success of rival game series EA Dice’s Battlefield with their latest game Battlefield 1. Like COD, Battlefield started off as a first person shooter (FPS) taking place in the second world war and gradually made its way to the modern era and began to focus on multiplayer modes rather than single player storylines. After Battlefield: Hardline (the story arc resembling a police drama) received mixed ratings from both critics and fans alike, most of which were critical, EA took the series to the First World War and struck gold.
As gamers around the world wait to see what will become of COD: WWII all that’s left is to wonder where the series could go next. The Call of Duty games that took place during the Second World War tend to have creative license by putting fictional characters in the middle of real life battles and in some games running into historical figures, this was mainly prevalent in the Black Ops series, mainly Black Ops and Black Ops II. Being a history nerd and gamer, I thought of where Activision should aim its time traveling sights on next and came up with some interesting ideas that could lead curious gamers to research and learn more about these historical events that seem to fade into the dust jackets of history books.

Call of Duty: White Death
The game takes place during the harsh Finnish winter during the Winter War in 1939 between Finland and the Soviet Union. During the war temperatures were so cold that soldiers would decorate the winter landscapes with the frozen bodies of dead Soviet soldiers by standing the corpses up in a ghoulish stance. The player takes control of Simo Häyhä, the legendary Finnish sniper who is credited with the highest kill count in Wartime history, depending on who was asked his kill count ranged from 280+ or around 800. Häyhä earned his nick-name “White Death” by the Soviets because he wore all white to blend in with the snow and kept a mouthful of snow in his mouth to cool his breath so he would not be seen, as Häyhä was said to get pretty close to his targets and use the iron sights of his weapon rather than risking the use of a scope that could reflect light from the glass and alerting his prey. The levels of the game can take place during Häyhä’s service during the Battle of Kollaa (December 1939-March1940) where missions can be based on stealth or you assist A.I. soldiers during intense firefights. The game’s main campaign ends the same way as Häyhä’s time in the war did, with an injury from an artillery strike and finding your way back to Finnish held territory.

Call of Duty: Resistance (series)
I say series because I can see there could be more than one installment of this game’s story-line. The series has players taking on the roles of different members of the Resistance Movements inside occupied countries during WWII. In old fashion COD style, you can have more than one particular group featured every other level that will tie the overall story together. Resistance in my opinion would have something for everyone in the first person shooter fan base, especially Female gamers since some of your most fearsome Resistance members during WWII were women in short, COD can have more playable female characters in the main campaign story mode since Finest Hour and Black Ops III. The vast number of stories and campaigns carried out by the Resistance movements would keep this series in COD going for some time while staying in the WWII comfort zone many fans missed. Games I would not mind seeing would be ones involving the little known German Resistance movement in the middle of Nazi Germany, the Filipino Resistance in Japanese occupied Philippines, and the Warsaw Uprising.

Call of Duty: Forgotten Wars (series)
Another series that would be interesting to see would be one about wars/conflicts that have shaped the modern world but seem to be forgotten by history classes. Since there’s many, a couple came to mind to me that I think would be well received.

COD Forgotten Wars: Rough Riders
Taking the player to the Spanish American War, the game can follow a soldier who’s part of the 1st U.S. Volunteer Calvary Regiment AKA the Rough Riders. Part of the game will allow the player to charge up San Juan Hill with Teddy Roosevelt (On foot like they actually did) and end the game in a climatic firefight at the Siege of Santiago.

COD Forgotten Wars: Korea
You guessed it, the Korean War. To be honest the game may actually confuse players since weaponry, equipment and uniforms for US forces during that war were pretty much the same from WWII but with this game you can add the feature to call in a bombing run by the new jet fighters. The game can follow three servicemen during the war, an Army Ranger, Marine, and a Corpsmen at a M*A*S*H* unit (imagine all the Easter eggs that would be in this game!) for the Corpsmen levels they could have a Button Smash/Skill check feature (you press a specific button at a specific time in order to proceed successfully) as they help take care of wounded soldiers in triage.

COD Forgotten Wars: Kosovo
OK, this one may be a bit of a stretch for me here but I figured not all COD fans will like the idea of the COD universe going back to strictly “pre-modern” warfare but I think this is a story that should be told. The game can take players behind enemy lines as a member of the British SAS or the US Special Forces who were sent in days prior to the airstrikes on Serbian military positions. You can help guide airstrikes, collect intelligence and evidence of war atrocities. Later on the SAS, when from hiding in the shadows to becoming hunters, swooping in broad daylight and capturing war criminals, and making daring escapes from local authorities. One of these missions actually sounded like it came directly from a video game!

Fitting for My Funeral