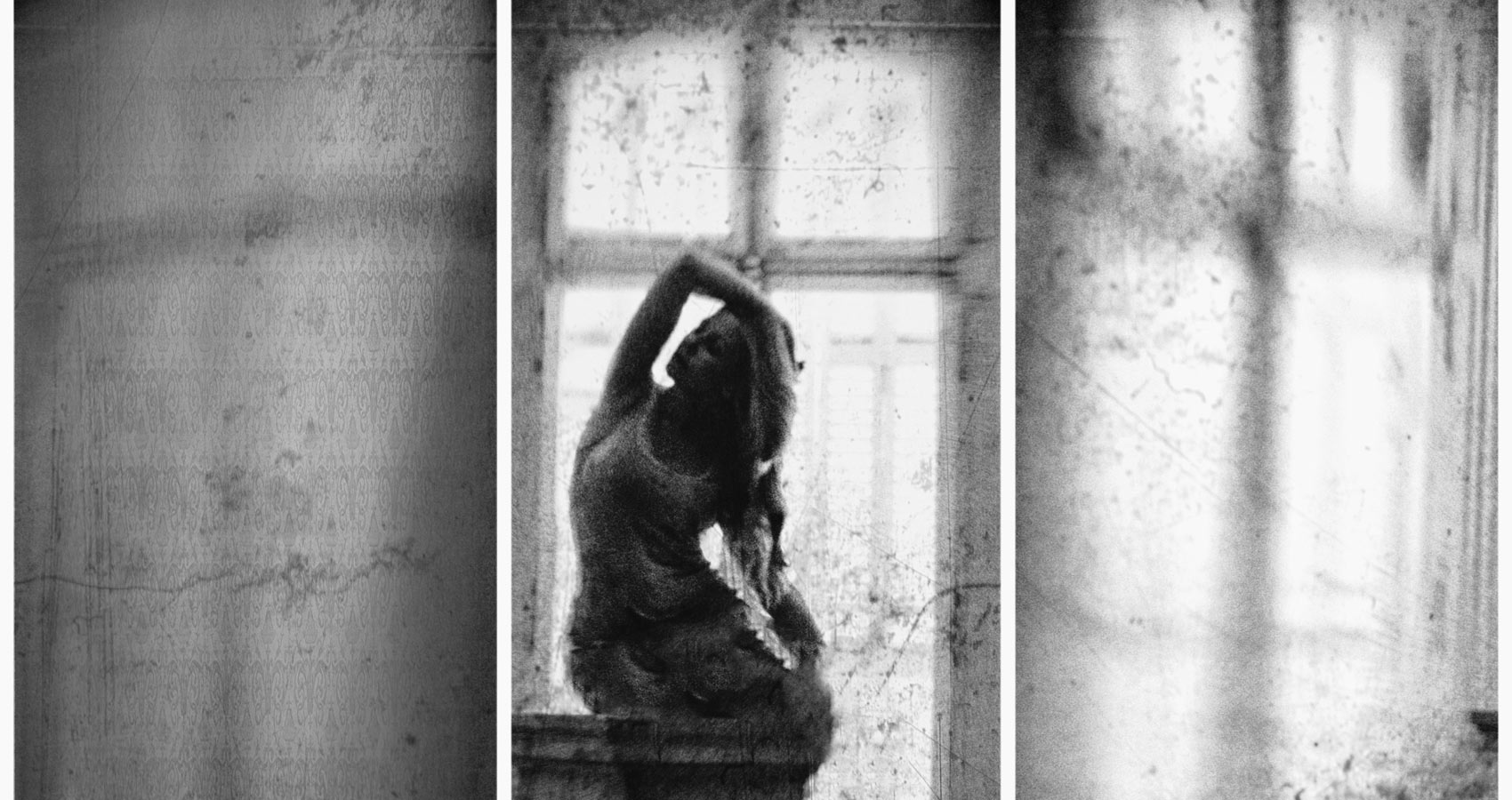 She’s too slow for blue lightning, the tongue that strikes her. Bleeding like a river. There is no going back once the floods roar. She let herself crumble. Owning lies like precious pearls, wilting for the dancers all circled, looking to the sun for real direction. Then the wind blows, and her eyes stop revealing who she wants to be. Her distance is the shape of who she might have been. Before storm clouds named her and the barking dogs pinned her down. The artist who felt the crumbling earth, lost her space to a battle that tore her down. The sound of bombs that left her coughing someone else’s rain. How could she defend herself?
So, in her isolated descent, the argument repeats itself. She paints herself into a stark reality, a small wood frame window with her back to the room. Listening to bleating, the useless howling of illiterate dogs baying at sirens peeling in the distance. Brooding morons chattering the rhymes they hear echoing down city streets. With each stroke of his brush, she finds less color. There’s not enough gray to make their empty chatter fit inside the little sea shell cases of their barbaric minds. She can’t stop the elementary schoolyard shadows playing keep-away from the other shadows that can’t run. She curls herself into a fetal argument that doesn’t require words. Only the threat of retreat for the war of emptiness. Where is God when she calls out to her heart? His expectations are beyond the race grubbing for power near the shops on every street.
Timid sheep stay hidden while rich girls play. She hesitates, then quietly turns her weary thoughts to the window. Smoke from the fires turns the sky orange. Orange from the smoke turns the sky to fire, gears and bricks fall past, while in her darkest dreams children fall victim to the poison that rages in the fields around her home. Her antique silhouette looks for the right clothing in closets dripping with machines that destroy. Wolves, whose packs run together, search for power of thought. She tries to avoid the evening conversations that became Jack the Ripper stealthily hiding in trenches, searching for its prey. So, she stands, looking into the dark light of Paris. Staring out stormy eyes, her face clouded with loneliness, she is in search of a name.
Chase spent the day inside looking for an inner place, somewhere inside him that would find a path not taken. Rain made the night that much better. His small loft gave him a bit of security from bombs and trenches. A world at war not far from his doorway. 1919 was so abstract, drowning for the first time in the heat of machines that destroy. He filled his bag with the most necessary things and walked away from himself.
Zurich, the place to be. Maybe he’ll find Tristan Tzara, Francis Picabia, like-minded souls, weary of the reality that carried the stench of death and machines rumbling over bodies caught in barbed wire, lying in trenches. The war hurt inside his soul; the soul of an artist stained by the color of his own imagination. It wasn’t easy getting from Paris to Zurich. There were maddening delays and holdups. He felt terror anytime a guard or soldier asked to see his papers. For six hours he rumbled on, holding tight to the prize he carried close to him.

Zurich, only 361 was a place he couldn’t find. It was over by the time he got there. The players scattered to New York and Germany. Some had left life for reasons abstract. There was nothing of the Dada world that he could find. After two days he took the train back to his loft in Paris. The slow monotony of going back was the same as getting there. His heart shouted out into the shadows of his thoughts. Where are the artists who inspired his work? Where is the sundown for his day’s impossible garden? The smell of smoke greeted him when he came back to his easels and pastels. He sat and shuffled through the mail then tossed it to the floor. Out of the middle fell a copy of a pamphlet with an event called “First Friday.” Chase made himself ready and looked forward to meeting some or all of the Dadaists that provided him with so much inspiration. Linked with this exhibition were works by Jaun Gris, Ribmount-Dessaignes, de Chirico, Leger and Picabia. He couldn’t wait to show off his painting. He sat back with coffee and rum looking out at his homeland. The drink made him warm and drowsy. He closed his eyes and let his mind go.

Truculent world ready to avoid innocents, the blue cradle of machines… ants who destroy. My painted lady nude in contrast waiting while her window drips the gears of a thousand old clocks lying in pieces and falling from the blood-stained sky. They’re not there. Brown to beige, she looks out at oil-stained ‘scapes and remembers what her world was like before war. Her light sandy brown hair resting on her shoulders, her cold eyes ever shaded on sullen earth. Maybe Tristen will see her. Maybe I’ll fill my glass again. Perhaps the sun can go backwards and reveal my absolute drunkenness toward each moment of violence leading me to my Dada brushes. She is perfect in her rage. She is eloquent in speech. She is loveless in her anger. She is silent, but if you look, she’ll take you there. My masterpiece drowning in the abstract knowing, waiting to scream, waiting to die in her window.

When Chase awoke, it was time to wrap up his painting. First Friday was hanging in his mind. He felt the excitement, he felt the world waiting for him. He made his way to the Salle Gaveau on Rue la Boetie with heart pounding for the dream of becoming a contemporary of Tzara, and Picabia. He got there in good time and made his way in. The Dada exhibition was already going on and the audience was not in good spirits. He stepped back and waited as Picabia drew on a large slate and erased his drawing as he went. Soon the mood was dark and the audience started fighting, before long they were rioting. The authorities came. Chase ran, made his way back home, hung his painting up near the window then fell back into his chair.

He lost his chance. Maybe it wasn’t meant to be. He admitted to himself that trying to understand the idea of “everything you see isn’t true” was too far away. All he could hold onto was the girl in his painting. The one you could barely see. The window she gazed out of, with her heart so broken, the horizon fighting a war she hated. The painting that called down the four years of bloody war that tore the world apart. He loved her, he curled himself around the idea of her joining himself to her. She was more than real. He knew from the inside. She was his creation, she loved him the same way he loved her. “I tried so hard to give you to the angry world so your beauty would bring light into all their lives. They content themselves with violence and rage. Lust for blood is where every heart divides, falling prey to its own illusion.” It suddenly arose to his silent heart that she was without a name. He stood and walked to her, raising his hand to caress her. He turned to the window and looked out at Paris dancing in the night. A ballerina who gently pirouettes, forever teasing men into thinking themselves forgiven even as they are seduced by her piercing silver eyes. Chase smiled, looking back at the work of his heart and hands, then whispered, “I’ll call you ‘Willow.’”

I'm an award winning song writer, I have two books on amazon and a third one on the way. I've been a writer since I was eight years old, I play guitar, bass, some piano.