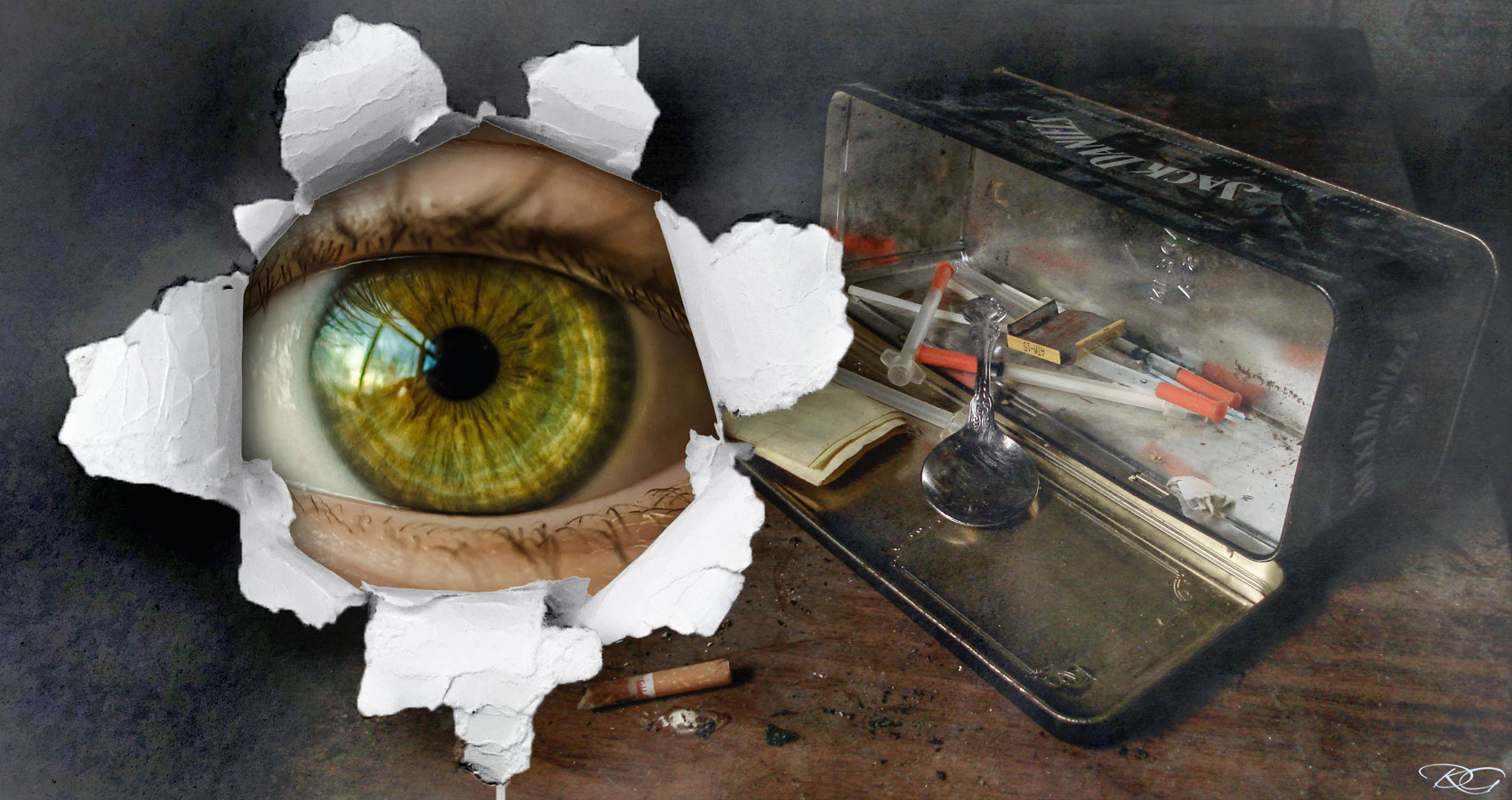 Maggie stares at the two plastic bags sitting atop the coffee table through bloodshot eyes narrowed to nothing more than a slit. For more than an hour now, knowing her resistance is weak, her will ready to give, they’ve taunted her with whispered promises of a paradise in which there is no worry or pain.

She lets a finger softly stroke the closest, the one filled with her “stuff,” then shifts to the other, tracing the pipe and needles with her long fingernail.

We’re here for you, Maggie, they seem to say. Just one last time. Then you’ll be able to quit for sure…

Yes…yes. One last time, she thinks. Then I’ll quit. But right now, at this moment, I need this.

She moves her hand to the bag’s zip lock and begins to slowly slide it along. But a knock—more of a pound—on the door stops her hand as it were grabbed, and she spins, her eyes landing on the old seashell clock propped up on the mantel.

“Shit, shit, shit…” She jumps from the chair and trips over the table, knocking the bags to the floor. With shaky hands she tries to scoop them up, or maybe push them under something, anything, but the knock comes again. Louder. More demanding.

Cops, shit, the cops… Her mind twists in paranoia, her body, sitting just moments ago on heaven’s doorstep, is now nothing more than a tangled mess of arms and legs that won’t obey her slightest command. She crawls as much as walks to the door and with her heart in her throat places her eye to the peep hole.

“It’s YOU,” she heaves in relief, pulling the door open. Her rubbery legs give and she drops to her knees, yet her eyes stay on her caller. “I’m…I’m sooo glad you’re here. You need to be here.” Tears begin to stream down her cheeks, bile gives warning that it waits at the back of her throat. “It’s my sister. Rebecca. Becky. She can’t do it anymore. It’s not fair. It’s sooo not fair. The chemo. Radiation. Surgeries. Pills. Geesh, it goes on and on. She looks like hell. She is in hell.” She turns, an unsteady hand gesturing toward the open bedroom door to the back. She points at what’s left of her sister, a bag of bones, her skin gray–obvious even in the dim light–and a wrap covering her head to hide her thinning hair. She lies in the bed, the thick covers barely moving with her shallow breaths. “You have to help her. Take her away. Take her from this awful misery.”

She drops her head into her hands, then looks back up. The specter stands even taller than she’d expected, but, like every image or drawing she’s ever seen, he wears the pitch black gown that flows to the carpeted floor. A pointed hood covers his head, only the glow of blood-red eyes showing from the dark shadows of its cutout. He holds in his long bony fingers a scythe, the handle straight and black, its swooping curved blade glimmering as if it carries its own light. He looks down and juts out his chin, leaving her for the first time to see the skeletal teeth that make up his mouth.

“What, what, do I call you…the Grim Reaper?” she asks, her words between gasps as the tears continue to fall.

“Rather cliché, wouldn’t you say?”

His voice is deep, raspy, and sounds as if it comes from the depths of a cavern. She feels it as much as she hears it, and a bone-jarring chill runs through her body.

“Death. Death will do nicely.” Shifting the scythe to one hand, he pulls a scroll from under his garb and unrolls it, albeit ever so slightly. He stares intently for a moment, then looks back down at Maggie. “Rebecca, did you say?”

“Yes. Becky. She’s in so much pain. It’s gone on for so long. She’s ready. She’s so ready. I can’t take having her suffer any more. She doesn’t deserve this.”

Death takes in a hollow breath, tucking the scroll back into its place of hiding. He waves his free hand in a slow arc just above Maggie’s head, a deep, rumbling chuckle coming out from that inner cavern. “No, no, my dear. You seem to be mistaken. Rebecca will be fine. Not soon, but soon enough. I have come here for you tonight, young one. How long did you think you would be able to ravage your body with drugs and alcohol, go for days with no sleep or decent food? I’ve watched you. And until this darkness enveloped your sister, you’ve spent most of your waking hours at the witch’s vat, concocting your very own cancers. Then, the potion complete and free-flowing in your soul, you spent the rest of those days wading in the cesspool you call your life.”

Maggie’s eyes go wide, her mouth drops open, but nothing will come out.

The draped figure leans back, grabbing hold of his chin and tapping a bony finger to where his lips once may have been. Then, after a moment of what seems to be contemplation, he gives his head a slight cock. “Yet, here you are. As you have been these last trying months. Your love for your sister has become the tiniest of lights in a long dark tunnel.”

He starts to say more, but something catches his eye behind her, and he pushes her aside, moving to the coffee table in the middle of the room. There he scoops up one of her dropped bags and holds it high in the air as if a ribbon won at the fair. He shakes his head – Maggie can almost hear loose bones rattling – and begins to laugh in a haunting reverberation that feels like icy daggers sticking in Maggie’s heart. He swooshes back, his robe fluttering behind as if in a breeze, taking a position directly in front of her, then points an accusing finger. “You were about to fill your veins with dark promises once again, weren’t you my dear.”

But before she can finish, he reaches down and grabs her arms, yanking her up in the air, her feet not even touching the floor. He seems to study her face for a moment, then, with a quick twist, spins her left arm such that the underside faces the light. “Look at these tracks. Do you even have any veins left?” He releases his grip and she drops, landing on her knees, her body falling over against the wall as if dirty laundry.

Just as she finds her breath, he bends down and tucks a hand under her chin. Leaning in closely, he meets her gaze with his eyes aflame. “But your needles are no longer able to fulfill those promises, now are they?” He chuckles in that hollow tone, then leans in even closer, his breath that of burning sulfur. “You’ve been thinking of our lovely Fentanyl, haven’t you my sweet? Excellent choice, though I must say, it’s not a good mix with your Jack Daniels. But you already knew that, didn’t you?” He waves a dismissing hand. “I’m not here to lecture you. I’ve only come to take that husk of a body you’ll have left when your breathing stops and that heartbeat of yours trails off first to a whisper, then to nothing at all.” He throws his hand yet again. “If not for your sister’s woes, I would have paid you a visit much sooner. Much sooner, indeed.”

“Wait, no…you don’t understand. You need to help her. I’ll be fine. I’m getting over this, I swear. I just need something to help me get through this little bit, then I’ll be fine.”

Death lets out a quick huff, then takes a step forward into the room. “It is you, Maggie, that does not understand.” He raises the scythe with both hands and, giving off a horrid groan mixed in with that torturous laugh, sweeps it down toward Maggie.

She wakes with a start, a foul taste in her mouth. For a moment she’s lost, but when her foggy eyes finally clear, she comes to realize that she’s in bed with her sister, who’s awake and looking down at her with a smile.

“Morning, sleepy head. You’ve really been out. Even snoring.”

Maggie shakes her head, hoping to loosen some of the cobwebs. “Snoring? Me?” She gives her crusty eyes a rub and her head another shake. “Yeah, whoa, I had a really weird dream. Really weird. Scared the livin’ sh…ah, daylights out of me.”

“It must’of. You were in there flushin’ everything down the toilet. Every. Single. Thing. I couldn’t believe it.”

“Yeah. Not long after whoever…wait…is that whomever? Never mind. Anyway, someone showed up at the door. You figuring on going cold turkey?”

“And for yourself. Geesh, Mags, that must have really been some nightmare.”

“Oh, gawd, you wouldn’t believe it if I told you. I mean that was…wait…the door? You heard someone knock at the door?”

Becky laughs and tussles Maggie’s hair. “Yeah, that pounding was enough to wake the dead. You know, at first, I thought the cops were raiding the place. But no shouts or sirens, and, then, after flushing your stash, you came to bed and crashed hard. Real hard.” She leans down on her elbow. “So, Mags, spill. If it wasn’t the cops, who was it that came knocking at that ungodly hour?”

Maggie feels her face go cold, her breath catch in her throat.

It was just a dream…right?