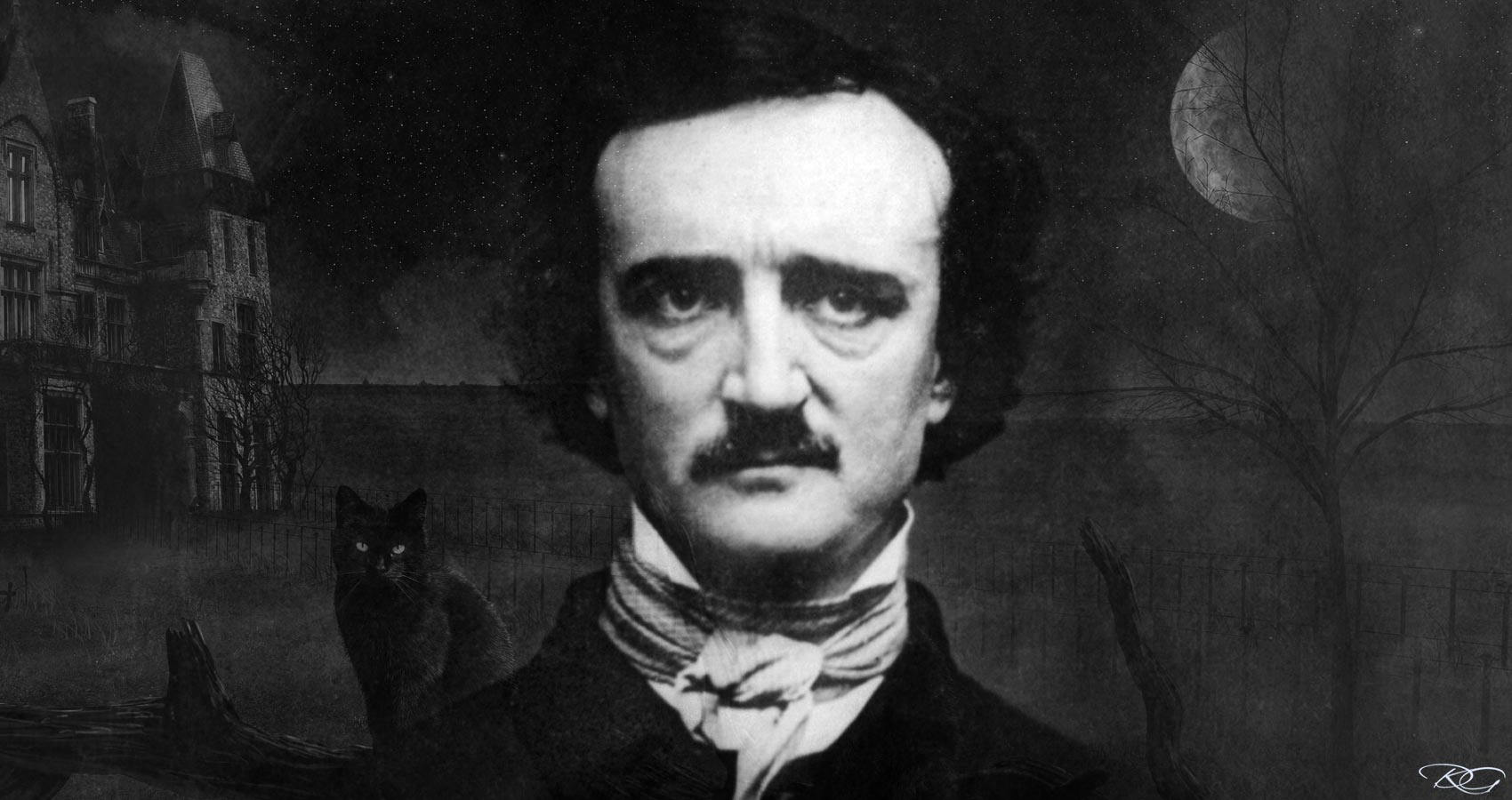 Night, like the Grim Reaper wearing his black rope, drags and looms insanity and dread in a suburban New England neighborhood. Jack-O-Lanterns’ grins are casted by their candlelight. Their ghoulish faces illuminate their mischief and wickedness into the fog covered streets, sitting on the porch steps in the night. Disembodied voices echo through the streets and alleyways of madness, murders and tragedies centuries ago. Shadows men and women dressed in 1800’s attire appear on the side of brick walls, walking and conversing only there is no one on the streets. Abandoned, deteriorating houses are boarded up by planks of wood and are forgotten by the modern world. Beyond the iron gates of the old cemetery, black cats with golden eyes frolic on the moss-covered and cracked tombstones. Ravens flying over the decrepit mansion, perched on its porch, crowing, “Nevermore, nevermore, nevermore.”

Yellow, cracked bones and tattered, dirt-covered clothes slumber in your wooden coffin, Edgar. Worms squirm through your empty eyes, staring at the cracked, rotten wood as you are buried underneath Westminster Hall and Burying Ground’s sacred soil, listening to the church bells chiming God’s hymn for the faith hearted and the lost. Your melancholy tombstone solemnly stands alongside your beloved Virginia’s tombstone, igniting your putrefying love beyond your coffins’ lids. Her disembodied voice, like an angel serenading to a faithless soul,
echoes through your skull of your souls being as blissed and peaceful in the afterlife as you both were alive. The other dead’s tombstones are cracked, their names dissipate and cluster on top of each other, unable to find peace within the forgotten burial ground coiled around by iron gates.

Your short stories and poems have intrigued and influenced the curiosity, imagination and trepidations of readers like me. Like the ghastly phantoms rising from their graves underneath the full moon’s spell, the grotesque, macabre, and madness, the specters of trepidation, are conquered from your tormented mind through your words written in black inks, weaving tales of horror and murder. Their iron chains become scotched and snapped. They ascend from their slumber, roaming and haunting the naïve, courageous hearts within their
homes and minds. Unreliable narrators such as the narrator from “The Tell-Tale Heart,” deceit his readers through alluring words, preaching about listening to the voices of Heaven and Hell, only to reveal their inhumane deeds and their human nature’s dark side. Edgar, as your skull rests against the side of your rotting coffin, you are hearing the settled, looming heartbeats of an old man’s heart, buried underneath the floorboard of his home along with his dismembered body parts by his deranged helper who snapped from the sight of his vulture eye
staring at him. Listen Edgar, listen Edgar, listen to the old man’s heart palpitating beside your coffin, driving your bones mad, unable to slumber in serenity.

Edgar, have you always dreaded death as you saw your loved ones especially your Virginia cruely taken by one swipe from the Grim Reaper’s scythe? Even when you spent your final days intoxicated by alcohol, grief and madness, did you see the Grim Reaper, like a ghost, haunting and following you down to the dampened alleyway where your body was found? “The Masque of the Red Death,” weaves a story of how the Red Death attends Prince Prospero’s masquerade ball, claiming the lives of seven nobles, including the Prince. Each room Red Death enters, a nobleman dies and the grandfather clock chimes, making the reader’s heart palpitated with dreaded anticipation. “The Black Cat” and “The Cask of the Amontillado” depict characters who are alcoholics and elitists becoming consumed by insanity, jealousy and wrath alluring, mutilating and seal their victims’ corpses within the walls, taking their deed with their victims who never see a glimmer of light. The narrator’s psychological torment from their guilty and impious deed unhinged their sanity, and distorting their perspective of reality and fantasy, becoming grotesque souls tainted and twisted by their impious vices like you were in life Edgar.

People continue to become fascinated with reading stories, especially around Halloween the readers’ curiosity and imagination into their foreboding and horrific expositions, complex characters tormented and conflicted physically, psychologically and emotionally by external forces and their suppressed desires, rising conflict and tension created by events and actions and supernatural beings. Like you Edgar, who had an intuitive keen sight between the physical plain and the supernatural, readers and writers have the ability to bridge between the worlds of old and new legends, light and darkness, sanity and insanity, skeptic and believer, and reality and imagination.

Edgar, you will never know how your short stories, even in the modern world of computers, laptops, tablets, Chromebook and Kindle continue to intrigue readers of different ages and generations, the believers and the skeptics into weaving Gothic imagination and trepidations, making their minds, like church stain glass windows, shattered from their deepest fears. Slumber peacefully Edgar at Westminster Hall and Burying Ground, hearing the church bells’ chimes and the ravens crowing their dreadful lullaby for the dead.
Nevermore Edgar. Nevermore.

Christina Ciufo is a passionate writer in poetry, short stories, flash fictions, fables, and completing her first novel. At a very young age, she always had a passion for writing stories and poems, specifically in fairytales, folklore, supernatural, and horror. After graduating Sacred Heart University with a BA in English, she continued to expand her writing abilities at Manhattanville College’s MFA Creative Writing Program and by May 2017, graduated with an MFA degree in Creative Writing. She completed Sacred Heart University's Education Program in December 2018 with a MAT in Teaching in both elementary and secondary. She is currently a Sunday School Teacher. She has numerously appeared in literary magazines including Spillwords, Ovunque Siamo, Nymphs, Truly Review, Mookychick, Moonchild Magazine, Crêpe & Penn, Cauldron Anthology, dream walking, Selcouth Station Magazine,The Wild Literary Magazine, Speculate This Magazine, Poetically Magazine, Analogies & Allegories Literary Magazine, The Clay Literary Magazine, Re-Side, Dwelling Literary Magazine, and Coven Magazine.