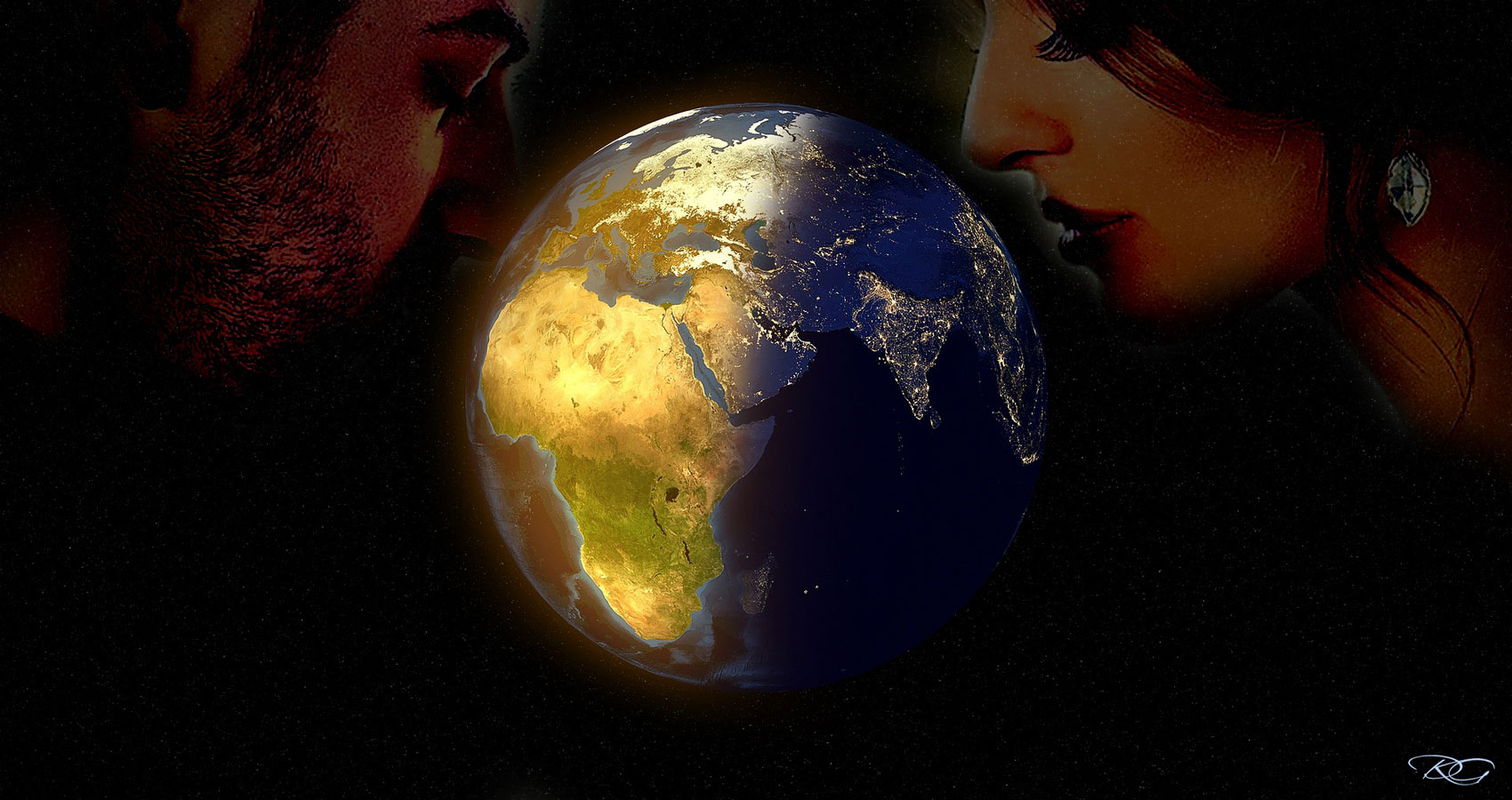 Once upon a time…a very, very long time ago, before the earth looked like it does and before the stars shined where they do, there was a very famous couple known for their huge differences in this very strange land.  This land was not like the earth we know now.  The people that lived then were not humans, yet followed rules like we do.  It was very well known however, that all felt this couple’s magical love.

As much as Mr. D loved his one and only, he felt like their jobs always kept them apart…as if there were higher forces separating them.  They were just never physically together…much like two working professionals nowadays, but back in these strange times.  They always missed each other with one going one way, and the other traveling the opposite.  He was never able to grace her and this would discourage him.  He’d go to her for a lover’s reassurance and she’d never fail her Darling.  With a simple “Don’t worry sweetheart, I will always be a part of you, and you of me.  It is the order of things.”  He would rest assured that it would be.

Yet, he would have nightmares twice a day.  Minutes before work and minutes after, he would awaken with the same vision from his terrible dreams: she’d always fall back to a black abyss after being inches from his grasp.

He would scream, and she would awaken him to promise eternity.  She was his wife, friend, mother, sister and counterpart when the visions would devastate him.  Whatever he needed.  Tender words to her Darling would comfort his ears:

“Hush Honey…
I’m here and forever yours
this I reassure
For as long as stars mature
This union will endure.”

Unknown to him, she would quietly pray to God for help with these nightmares.  She would pray in silence:

“Lord, our fate divinely construed
Yet you will us sad and blue.
from us, is there a due?
Whatever we to do
I beg our lives anew.”

And while she burdened their future, He would look at her like a baby to his mother…for at that moment of weakness, she meant his protection, love and security.  She would end with:

“You know I can’t live without you.
Since the first start debut
We are but two souls as one glued
Until the last star Baby, then turn blue”

and with that, He would fall in love all over again…as if it was the first time his sore eyes were graced by her sight.

Because of all the burdens she battled, he needed, had to, with no doubt, find a special gift for his lady.  Something unique and worthy as a token of appreciation for her devotion.  Something one of a kind that reflected this one immense feeling in his heart. So, Mr. D went out and:

He looked
up and down
nose to toe
high and low
to and fro
for this gift that he would bow.

Then he looked as far as he could throw…

and there he saw the moon!  As soon as he saw that transient moon in the heavens, He knew the moon and his wife were meant to be as one, for the moon would finally have a home and his wife would have that worthy gift.

…but Mr. D needed to consult with the only one able to make the moon a gift….

and so he went to heaven and said:

“All mighty, you the one above
the moon I need for my beloved”

so God pondered among doves,
and gestured with white gloves:

“Why should I part from my beloved moon?”  God thundered….

Mr. D, shocked but happy God would even consider his request, answered with great confidence: “I want to give her the moon because:

She’s the sugar to my salt!
Has my heart in her vault!
as long as I am
your will and all

Covers half this dirt and clay
Opposite me, I’m so dismayed!
Lord just one word, if you may…
for our eternal embrace
Your will is my way

We are different.  While I’m white, with blond hair, she’s beautiful, dark and mysterious!  When I’m tired from being everywhere at work, she’ll come to relieve me and she throws me stars as kisses!

But my Lord, it also feels like I can never be close enough to her.  I have visions of almost gracing her skin, but she falls into the darkness, every time.”  The Lord listened:

And pondered
all pleas of the heart to him
With no words to squander
declared with Zeus thunder:

And so Mr. D nervously awaited those seven cycles and as promised, God returned on the 7th and he spoke:

“I’ve seen the proof upon your history,
You two will forever be…this not a mystery.
I’ve blessed your arguments with victory!
for I could find no trickery
but a gentleman soon free from misery.

and for his beautiful wife,
A new moon and life!”

With those words, God manipulated the heavens and the earth with wonderful, thunderous noises and bright flashes!

God then handed the moon to Mr. D and he announced:

“To you Day, I present this moon for your beloved lady, the Night to belong to her forever!  Whenever she calls for you, you may streak your rays upon this moon and it will light the darkest corners so all could see the beauty of your lady Night!

The thunder you felt was to give you a new happy life!  I’ve created a new planet out of this molten rock and it will be round.  I will call it earth.  Upon this earth, all humanity will live and worship you and your lady with great admiration.  Unlike the emptiness in the heavens where you could not touch her upon anything, you will be able to beam your light onto the terra firma of earth and blend with your lady.  I shall call this meeting place “the twilight”.  There at twilight, hands of light and darkness will interlace and you’ll be able to embrace her at the edges of your light and her darkness.  Upon this earth there will always be twilight somewhere for you to embrace your love.  You will be still and the center of creation.  I’ve also created the ‘eclipse’ and upon this marble, the two of you will be as one upon wherever it touches earth.”

God spoke it, and time began.

So from that day forward, the moon eternally belongs to Night.  This cycle of life will forever live in bliss as one in the twilight, and with an eclipse, be intimate…until the last star falls from the heavens.

Day’s face printed on the moon with happiness when he put it at her feet.  You can see his face when he’s gracing lady night with rays.

In dedication to my two lil ones M and M.
“Who loves you? And who do you love?” 🙂
KTFM