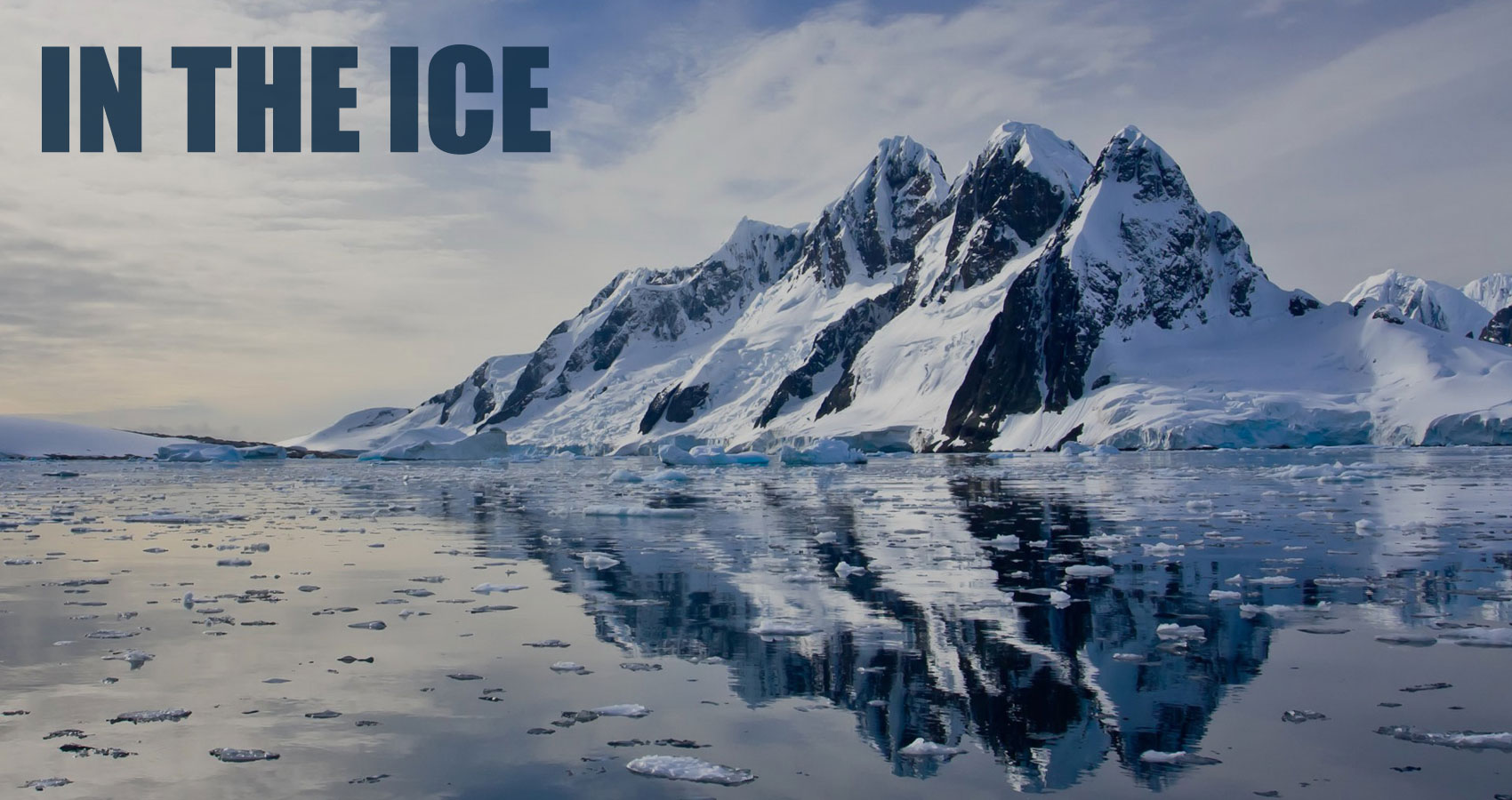 With the world’s climate changing, the face of the planet too is beginning to change with land being lost and mysteries being uncovered hidden in the Arctic landscape. One such geographic abnormality was discovered on a portion of Antarctica that’s near massive ice shelves that have been weakening from the rising temperature in the world. The anomaly detected is believed to be a mountain that’s partially submerged under what would have been prehistoric waters and hidden under snow till now. A multinational team of researchers have been dispatched to the site of the mountain with the hopes of gathering samples from the soils and rocks that make up the mountain in hopes of making new geological discoveries. The following were the brief emails sent to Dr. West from his colleague who headed the expedition before they sent a distress signal for immediate departure, abandoning the expedition.

Email 1
Dr. West, I’m updating you on the situation here in the arctic. No doubt news has reached the mainland if not the rest of the world that the largest shelf of ice to ever break off into the ocean has happened. I’m happy to say that the team and I are safe since we are about fifty miles away from where the shelf broke off. The expedition will continue as planned as we are not far from where the “mountain range” was located under the ice by satellites, personally I think the only good that may come from this warming is that this geological discovery was made possible. Our team’s navigator Koit from Estonia said we should reach the peaks of the mountains that are protruding from the ice in the morning. From there we will set up the equipment and begin to extract samples from the mountain itself and surrounding ice. With any luck we may find frozen samples of prehistoric plant life.

Email 2
We can see the tops of the mountain sticking out of the ice nearly a half mile away this morning! To preserve the integrity of the samples we decided to set up base right here about a half mile away from the peaks. After we set up base the team’s head engineers Christophe and Allen (Christophe is the German I told you about and Allen was that foremen from the oil rig in Texas) decided to head to the peaks themselves to survey the scene before we set up the drills and extractors later. On their way to the peaks the two are placing markers with nylon cord from the camp to the mountain site in the event if we have to cross this landscape in heavy snowfall. I think I spoke too soon, the weather was fair but suddenly clouds rolled in and the wind picked up blowing snow all around like thick dust. The rest of the team took shelter in the main tent that holds up to this ferocious wind.

Email 3
While one of our researchers Jae Hwa the Geologist from Korea is showing off her cooking skills and treating the team to some spicy soup from home (a talent indeed that will help moral for the next few days!), Koit and I kept an eye out for our engineers. As we looked on in the white curtain that now hid the mountain peaks, after several minuets we saw a shadow coming out from the distance dragging something. It was Christophe with a makeshift litter being dragged behind him and inside was Allen tied up and rambling, “We gotta get out of here! We gotta blow it up or something!” was the most I could make out from his episodic screaming. The team’s medic Dr. Martin (of Canada) sedated Allen which restored some form of order in the cramped tent. I have taken Christophe aside into another tent to ask him about what happened that turned the normally docile Allen into panicked disarray. What he told me sounded a bit far fetch and I fear it would cause concern among the rest of the team so I asked Christophe to keep our conversation between us. I won’t say all that Christophe has told me but I thought you should know Dr. West that it seems the peaks sticking out of the ice in the distance are not Geological but Biological in nature. I’m intrigued by this revelation and will look into myself when the weather clears up.

Email 4
Sorry for the delay! The storm wrecked havoc on getting any type of signal! The snow has stopped falling but the winds are still blowing kicking up snow from the ground making it too risky to attempt to approach the (between us I’m now calling it) anomaly. Regardless of the wind, we were able to construct the infirmary structure at the request of Dr. Martin. Doc and I shared the same concerns about Allen scaring the others on the team. When he’s sedated he sleeps but when the sedative wears off he starts to panic and continue his rants. With that we feel that he should be kept separate from the others and allow time for him to talk with Doc and myself with the hopes of calming him so we don’t have to call for an extraction for him which would delay the expedition even more. Christophe has been distant from the others, an act of which I can’t tell if he was affected by the “incident” as well or if he’s afraid he’ll not be able to contain himself and tell the rest of the team what he and Allen have found, I’ll talk with him later.

Email 5
Since my last Email I’ve talked with Christophe who now seems a little more relaxed but he chose to stay in the infirmary with Allen who’s slowly with the help of Dr. Martin, gaining back his composure and only needs a sedative to sleep. My plan is to get both Christophe and Allen to tell me everything they saw at the anomaly before the weather fully clears; I guess I forgot to mention that the winds are still raging!

Email 6
There’s been a development since I emailed you earlier today! I don’t know what time it would be there but right now as I type it’s 3:44 in the morning. I don’t know how long I’ll be able to keep what Christophe told me to myself, the rest of the team is suspicious after what just occurred. After another day of boredom waiting out this storm all of us retired early with the hopes that the weather will break and we can construct the rest of the camp and begin work. At 3AM we were awakened by a sound I’ll admit I’ve never heard before and vibrated the ice we’re on and echoed over the wind! Almost on cue both Allen and Christophe had fits screaming and acting mortified by the sounds. After fighting and sedating both of them myself and Dr. Martin tried to tell everyone the sounds we were hearing must be the groaning of the ice since that massive ice shelf broke off a few days ago. I knew what we were saying was a lie and I think the other members of the team knew it. Jae Hwa said the sounds we heard sounded animalistic, almost like a whale call mixed with a guttural elephant growl, dammit I forgot she’s also a marine biologist! With doubt in place I should tell you before I tell the rest in the morning about what Christophe told me.
Before the snowstorm hit, Christophe and Allen reached what we thought were rocky peaks of a mountain but found it was really emaciated appendages of some animal the likes of which neither man has seen before. Christophe in his broken English compared the size of this creature of that of an average size adult fisherman holding onto a striped bass but if the man was the creature the bass would be a blue whale. The limbs which may have been elbows or spines are covered in a blackish grey flesh which shimmered green depending on the direction of light from the sun. The ice surrounding it almost acted like a window that showed the ghastly head of the creature that was tilted sideways with a globular ash colored eye gazing up with a dead stare at the men. The head looked like a snub-nosed crocodile with no lower jaw and instead of teeth was what looked to be baleen but made up of clawed tentacle-like arms.
If what Christophe told me was true and if the sounds we heard this morning were from that, I have no choice but to go myself tomorrow braving the storm and see for myself if the last part of the German’s recount of finding this creature is true.

Final Email
West, words can’t describe the dreadfulness and majesty of what I saw today in the ice. It was as Christophe said; the mountains were actually the bent elbows of something frozen in place. The ghastly insectoid-reptilian head I could see clearly under the ice as if it was glass. I stared into the swimming pool sized mirroresque eyeball of the creature and saw myself and Jae Hwa’s (who accompanied me) reflections in it. Then it happened, the thing that made Allen lose his reason, as I walked around the perimeter of the ice the creature’s eye followed me. At least it looked like it was so I thought; it could possibly be an optical illusion that makes it look like the eye followed me. I stomped on the ice as if I wanted to make the frozen beast flinch for my amusement but it was I who flinched. The mirror like eye slid up revealing that it was a third eyelid and the real eye, a fiery-colored reptilian like eye with what may be the pupil resembling the surface of a compound eye the likes of which you find on houseflies! The large eyeball’s glance shot right into my direction telling me and my fellow terrified companion, whatever this creature is in the ice is still alive but only the ice is keeping it there! With the latest ice shelf falling only means we are on borrowed time before this hellish thing is freed! God only knows what it’s capable of and lord help us if there are more or worse things like this somewhere else in the world about to be freed!