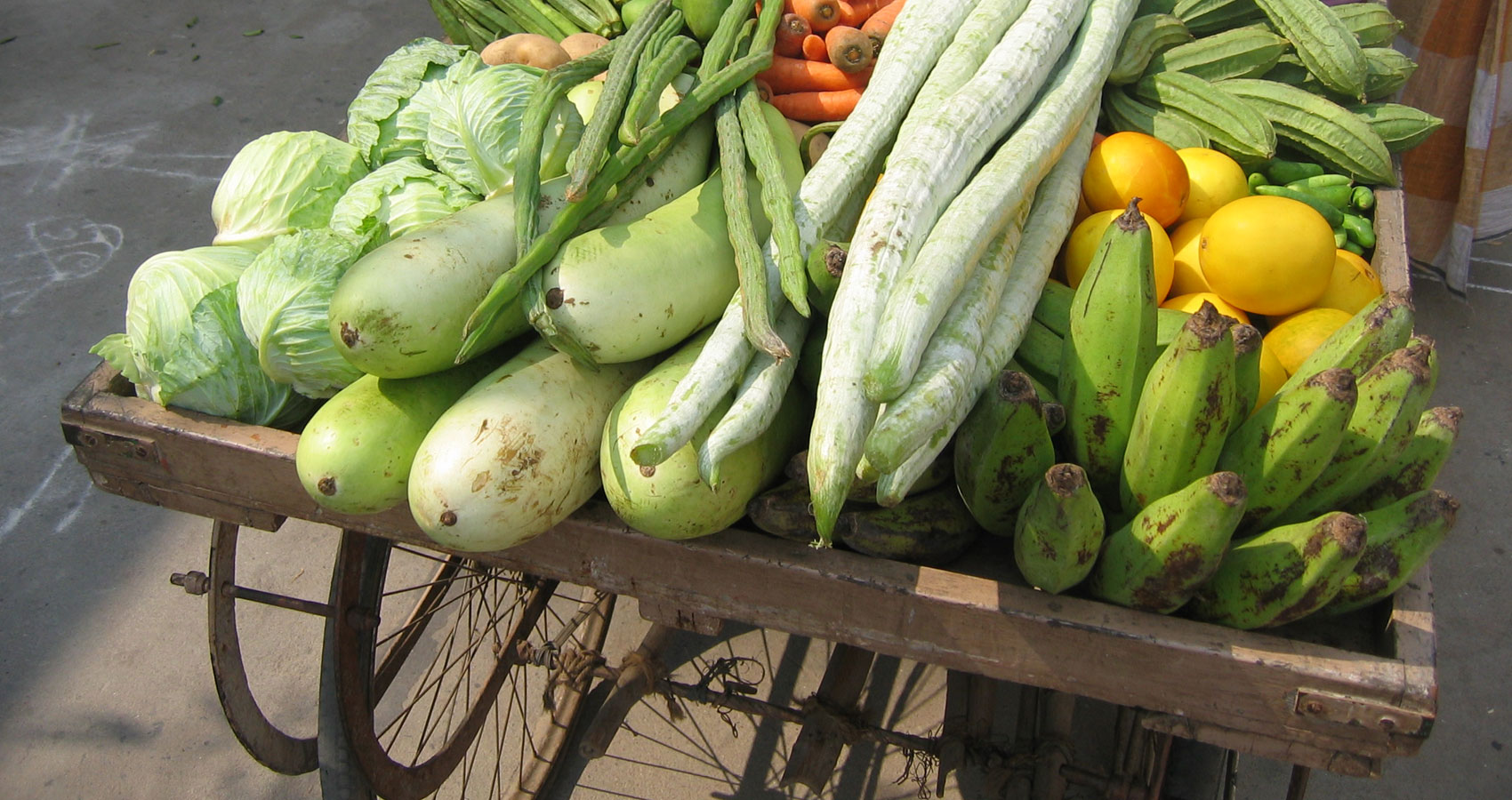 On a chilled grey dawn, I hear a call out. I get out of bed fumbling, and reach for my shawl. Somewhat disoriented and half asleep, I make my way through to the roof of my bedroom. Eyes still squinting, I bend over the brick, short wall, to see a vendor halt in front of a six-storied building with a cart full of green vegetables: beans, spinach, carrots, cucumber and cauliflower. He looks up, as he hears a yell faintly audible, from above.

In a knee-jerk reaction, he pulls up the handbrakes of the cycle, to stop the cart moving any further.

“Give me one kilogram of beans, carrots and cucumber.”

The vegetables appear to be fresh, as though they have just been plucked from an adjacent vegetable patch, with cauliflowers white as snow; greens, lush and rich.

“Twenty taka,” the vendor screams back.

“Too much,” the woman retorts.

“Not really, everything is too expensive, amma, surely you understand that.”

“True, how about fifteen?” she harangues.

The woman nods in satisfaction, thinking that she has struck a hard bargain. While a little servant girl comes downstairs, to collect the vegetables from the vendor, she tosses a twenty taka note recklessly. Out of the narrow, grilled window, it flies through the air, descending gently like a kite on the dirt. The vendor rakes it out of the dirt with his grubby fingers, puts it in his shirt pocket. At the same time, he also takes the change out and hands it to the girl, now standing in front of him. Off he goes again, pedalling his cycle-van hailing “spinach, beans, and cauliflowers”, stopping and selling his greens, through the dusty streets of Uttara in Dhaka.

A little ashen from the early morning mist, the visibility is quite clear from the steady pour of sunlight. Ripened fruits gather in cluster, amid posies of tarnished leaves, in the orchard at the back of the house. None of the pomegranate, the coconut, the guava, the date or the betel nut trees has escaped the onslaught of pollution. Leaves have lost their hue, to the thick dust and masses of irregular black blotches. The real colour does not return until monsoon, which is when the rain brings the fresh colour back in exquisite jade.

The market is not far, but for an average family here, buying from vendors is the most hassle free way to get hand-picked vegetables for the day. Break-fast is laid on the dining table downstairs, which is nothing short of a delightful spread of chappaties and vegetable curry. Oodles of omelette, halwa, fresh coconut juice from the orchard, and a sugary cup of white tea, served in one wholesome meal. Homecoming made sweeter, than never before.

To sit by the window and sip warm tea is the most usual thing to do on a lazy morning here. Apart from a few rickshaws, there are also some cars, honking desperately and quite unnecessarily to get past. Indeed, how little things have actually changed. Deafening blare of the horn and the tinkling of the rickshaw bells beat in dull monotony. As the idle morning rolls by, the drivers, the paan-wallas and the street people gather, under the same lamp-post in pursuit of futile political discussion.

Spitting betel juice occasionally into the smelly, open drains, and smoking cheap cigarettes, talks about party politics, grocery prices, and general law and order situations go on for hours, until someone is summoned to report back to duty. The same odd crow is perched on a saggy electric wire; the lonesome, mal-nourished dog shuffle along the jagged road.

On their kitchen floor, the little servant girl, sits on a piri or a very short stool to cut her vegetables on a boti knife. Evidently, she has a lot of practice, as I observe from the precision of her cuts, slicing through the carrots and the beans: some thin, some thick; skills, which go unnoticed and often unrewarded.

In a while, I venture out for a rickshaw ride, this quiet afternoon. The heightened midday sun takes the morning chill off. My rickshaw approaches a maddening crowd of gridlocked cars, trucks, buses, people and a multitude of other rickshaws in the middle of the main road. Traffic stalls haplessly in an effort to edge out, through any opportune opening, but to be quickly blocked by similar manoeuvres of thousands of other vehicles. Traffic lights change without success, as police continue to berate for more discipline and countless whistle-blows falling on deaf ears.

Mainly Toyotas, but I can spot a few new models of BMWs and Mercedes on the road too. My rickshaw crosses the intersection, narrowly escaping a huge bus, which stops at the very last-minute. With no safety plans in place, the vehicles drive on, until someone is caught out by an on-coming vehicle. Oblique and slippery, the seats of the rickshaws are precarious sometimes. No one really registers people’s unfettered cries when their fate hangs in the balance, as rickshaws meander out of congestion. Once on the other side of the road, my tour continues with a sigh of relief.

I am awakened from my thoughts, by noisy clunk of a crude collision. Surrounded by a huge crowd, suddenly, I notice a small group of men engaged in heated argument. Captive audience of this street drama, I witness an accident. A van has hit a BMW and has knocked its head lights out. With a sedated expression on her face, a young girl dressed in jeans and T-shirt is seated next to one more person on the black leather seat, an elderly woman in an expensive sari.

The driver of the BMW demands huge compensation. An agreement is reached before the offending vehicle is allowed to go. For two-hundred taka, the matter is now resolved, however, without any police presence. Acting as the police, the judge and the jury, this sentence is mete out by the bystanders alone. And poetic justice prevails.

I note with care that the demarcation between the haves and the have-nots is sharp. Slums grow in step with the increasing population; the gap between the two worlds widens. Giving charities are not uncommon either, when the rich tries to expunge guilt. Further down the road, a woman in the hijab hands out square little boxes to her driver from inside her white Toyota sedan. He in turn, gives it away to the street-dwellers. Their homes are nothing other than amateur patch-work of make-shift dark hovels, built from used plastic sheets.

Sized up to a tiny tool shed, each such hovel is inhabited by at least five or six people. These slums thrive, as millions of children are born every year; then again millions also die. Resilience is their coping mechanism. Their basic needs are hardly ever met. Shortage of food, drinking water and poor sanitation, a regular affliction. However, in this instance, men, women and children open their boxes happily, which takes their breath away. It is Biriyani! A mouth-watering dinner no doubt, but what tomorrow might bring, lies in limbo.

Past the slum, a massive three-story building stands in whitewashed rendered finish. There is a party going on here tonight, as I understand from rows of cars parked on either side. Each car has a driver, who eagerly waits to open the passenger’s door for their masters and mistresses to egress. Posh ladies step out. Underneath, the expensive silk saris, the high heels rattle on the concrete road. Diamonds glitter in the sallow street lights, while the seductive aromas of their expensive perfume, waft in the stale air.

The western sky darkens. Creatures of the night creep in. My rickshaw driver has done the rounds and is now tired from it all. I ask him to stop the vehicle. Alongside the big house, open drains reek of toxic waste. Wallet in my pocket, a monstrous four-wheel drive gets past; it splashes some of that water onto me and him.

Swatting an irritating mosquito on his forehead, he scratches an itchy spot and waits for his fare. In a moment of unexpected anguish, he asks uninhibitedly for more money than what is bargained for. Big droplets of sweat hang from his forehead. He wipes them off with the red and black Grameen gamcha placed around the neck.

It behooves, not just me, but anyone to pay him what he deserves. Given, a drained, skin-and-bone young face, he somehow looks much older. Age brought as an early onset of poverty. Watch him get back onto the rickshaw, in his dirty, torn, checked lungi with mismatched white, cotton frayed vest is agonizing. Slowly, he dissipates into the murky night, most likely back to his people living on the margin.

What the rickshaw wallah says is clearer in retrospect. When he bargained, all he ever said was, ‘please give me a couple of taka more’. He asks not just to feed an ever hungry family. A couple of extras can never provide for more than a meal. However, in anticipation that there is a possibility, perhaps an infinite possibility, for ‘more to come,’ is his ultimate incentive.

If one were to typify a place, then these are snapshots that need to be captured. Brazen realities frozen in time; progress impeded because of a tradition of cultural sloth. The world goes by without a moment’s reproach, and I retire for the day. However, a metaphor of juxtaposed realities drones in my mind.

“Let us go then, you and I, when the evening is spread out against the sky, like a patient etherized on a table” –   The Love-Song of J. Alfred Prufrock – T.S Eliot, 1920