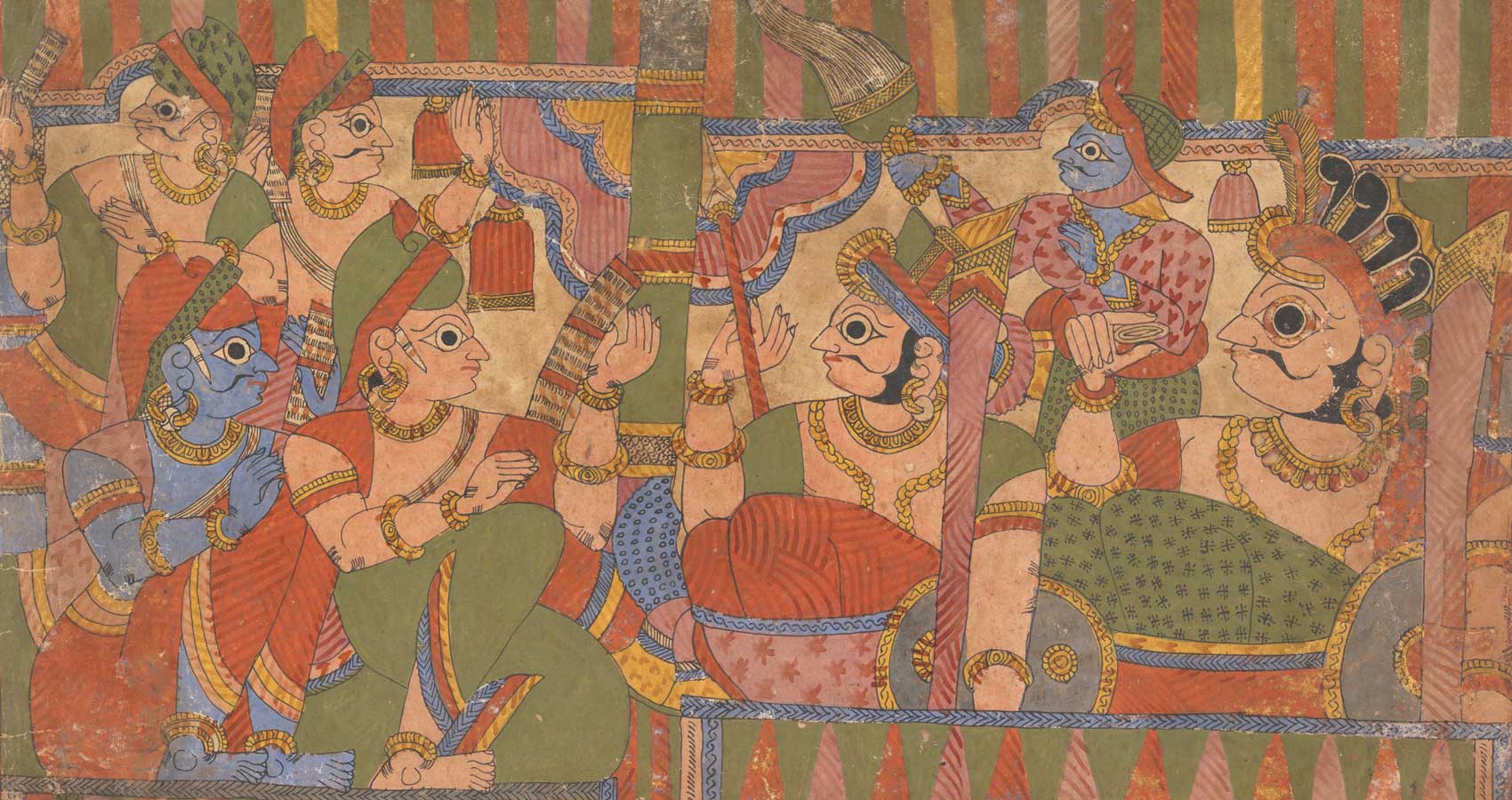 An anxious, morose King Dhritrashtra pondered,
Disturbed by the increasing prowess, influence tall,
Of the humble Pandavas, his nephews all,
For a possible solution, he sternly ordered!

Kanika, his Chief Minister, appearing to his rescue, smiled,
With folded hands he quietly stood,
As the King, with envy, to lower realms stooped,
The wise yet shrewd Kanika advised!

O King! Act in a way that would,
Protect your sons from the mighty Pandavas,
May the kingdom hail the glory of the Kauravas,
Employ possible means, whatever you could!

Kanika then advised King Dhritrashtra, thoughfully sad,
Be prepared always to strike the enemy,
With your uplifted mace, prowess, tyranny,
No matter what means employed, however bad!

Act in a way that no enemy discovers,
Veiling your true self, as the shelled tortoise,
Your weaknesses, strengths; maintain poise,
Conceal your plans, the secret that hovers!

Accomplish the projects, from start to the end,
Uproot the problems threatening your power,
Which, if not fully extracted, shall produce an infected sour,
Empower yourself with the mighty firewall fend!

Whether a weak or insignificant opponent, never neglect,
Even a tiny spark can consume the forest,
Spreading the inferno, engulfing the farthest,
Leave not a speck of doubt, perish all that you suspect!

Kanika delineated the means to the desolate King,
The four ways of subduing the enemy strong,
Providing solace to the heart that bled for long,
Conciliation, Bestowing Favours, Creating Disunion and lastly, Killing!

Somewhere in a heart burnt the fire of jealousy, hatred,
Prince Duryodhana, the heir to Hastinapur’s throne,
The valour, the might of the young Prince shone,
The brotherly love shattered, the bonds weakened sacred!

Worrisome Prince when counsel sought,
From his friend and nearest aide, his confidante,
The humble polite Karna seemed hesitant,
Never in his wildest dreams could he have thought!

The courage, the skills in the battlefield shall be displayed,
Was Karna’s advice, who downright rejected plans evil,
The demands thus unfulfilled of the egoistic peril,
The anger, the agony, the despondent emotions of Duryodhana arrayed!

Not relishing Karna’s counsel, his uncle offered solace,
Well known for his tricks, smiles that entrap,
As the treacherous trapper cherishes the caged bird’s flap,
Entangling words no less than the labyrinth, the maze!

The inner battles victorious over the self virtuous,
The helpless being letting the morals slip away as the sand,
The goodness, the deeds alleviating the soul no more fend,
Feeding the ever expanding, mountainous, the ego horrendous!

Peacefully exile my dear cousins, O King,
To the town of Varnavata, where they’ll reside peacefully henceforth, forever,
The weakest moments, the fatherly love exploited, how clever,
Let me secure my position, let my success songs all sing!

Bewildered, the King was perplexed, shaken,
Exile the Pandavas! Oh! How could I?
The revolting citizens shall raise hue and cry,
Bhishma, Kripacharya, Dronacharya, Vidur shall leave me forsaken!

Duryodhana persisted in his endeavour cruel,
The King, thought of the Pandavas, their good deeds, their flair,
Oh! How could I snatch the kingdom from them, their share?
My son’s ambitions shall leave them savagely mauled!

Yielding to his son’s counsel, intent camouflaged,
As the valley paves way to the brook’s uninterrupted flow,
King Dhritrashtra permitted Duryodhana’s ego to grow,
In the court, the beauty of Varnavata was purposely praised!

The impressive accounts of the festival impending,
Persuading the Pandavas to be a witness,
Of the nature’s beauty at its best and finesse,
Finally succeeding in the enshrouded conniving!

The obedient nephews cheerfully agreed,
To visit Varnavata and witness the grandeur,
Of the festival celebrating Lord Shiva’s splendor,
Unaware of his cousins’ secretive deeds misdeeds!

Bhishma and Kripacharya’s blessings sought as a gift,
Dronacharya’s love for his beloved disciples thrived,
Teary-eyed farewell to the precious five,
Along with Mother Kunti, quietly the palace they left!

The one who held his poise, his calm,
Vidur, the wisest, perceived the situation,
Pointedly warned Yudhishthira of the possible destruction,
In words intelligible only to the wise, the caveat to avoid any harm!

He alone shall escape, advised Vidur, from threats unknown,
Who forestalls the intentions of the enemy astute,
There are weapons sharper than that of steel, that uproot,
Act wisely, be on guard; to the dangers you shall be prone!

The conflagration devastating the forest, several species harmed,
Hurts not the rats, in the holes that take shelter,
Nor a porcupine that burrows deep sown, while others run helter skelter,
A hideous plot awaits, Yudhishthira was hence forewarned!

Started on their journey in the joyous sunshine,
Proceeding in the darkest unknown clouds of sorrow, anxiety,
The nefarious oft surpasses the courageous mighty,
Love, faith, intrigue, betrayal in relations entwined!

Hastening to Varnavata, true to the instructions,
Purochana built a palace beautiful for the reception,
Of the Pandavas, with material combustible, perfect for destruction,
Skillful artistes dedicatedly completed the construction!

The Pandavas resided in the palace lavishly furnished,
Astonished by the beauty of the mansion lac-smeared,
Joyfully greeted at Varnavata, by the citizens respected,
Joyous feasts amidst the festivities organized!

Inspecting carefully the residence at the first opportunity,
Yudhishthira recalled Vidur’s words,
That which consumes straw and woods,
Shall harm not the one within the hole apparently!

Soaked in substances, materials inflammable,
Of shellac, ghee, dry grass, oil and wood,
A masterpiece erected by Purochana, the mastermind shrewd,
The trap laid by Duryodhana, the plan infallible!

Roaming in the countryside, the Pandavas familiarized,
The outlets possible for their future escape,
The knowledge they gathered of the surrounding landscape,
The escape route to be prepared before Purochana’s plans materialized!

An expert soon was sent by Vidur, the wisest,
Wasting no time his digging job he commenced,
Raising no suspicion, getting prepared for the defence,
Leaving no stone unturned, no eyebrow raised the slightest!

The work in progress uninterruptedly augmentered,
In the meantime one year passed pleasantly,
A carefree life pretended, yet on guard constantly,
A large tunnel excavated from the palace center!

The Amavasya night finally arrived for the planned escape,
A violent wind as if blew to their aide,
The palace that purposely for the destruction was made,
Ready to engulf as the inferno fiercely gaped!

Mayhem broke out at Varnavata, the commotion, the turmoil,
As the candle that burns to lighten up bright,
The Lakshagraha melted, burning throughout the night,,
The roaring fire, the swelling blaze all efforts to douse futile!

The frightened crowd, the helpless lamentation,
The palace reduced to ashes, enveloped in flames,
Engulfing Purochana, the unpitied victim,
Suffocated in the firestorm of his own wicked scheme!

The five Nishada men along with their mother sheltered,
Secretly in the palace after the sumptuous treat,
Sadly consumed by the conflagration, unfortunate destiny they meet,
As the Pandavas quietly left the palace unharmed unscathed!

The poem is about the episode of ‘Lakshagraha’ from an Indian epic ‘Mahabharata’. The Wax Palace or the lakshagraha was especially created on the orders of Kuru Prince Duryodhana to get rid of his cousins, the Pandavas who were the rightful owners of the crown of Hastinapur.

Giti Tyagi (b. 1976, Karnal, India) is an Editor, Creative Artist, Author, Poetess and Reviewer from India. She is a former Senior Lecturer from MM University, Ambala, India and an Educational Consultant at Karnal, India. She is the author of the books ‘Priceless Pearls’, ‘Crossroads & Other Stories’ and 'The Ascent Of A New Dawn’. She is the Editor of ‘Beyond Corona: The Silver Lining’ and Translator of ‘Amma Boli’ (Hindi). Giti Tyagi’s poems, stories, articles, book reviews and translations have been published in reputed national and international magazines, journals, ebooks and anthologies, winning hearts of the readers of all age groups. Having won several competitions, she is an extremely popular story writer for children’s magazines. An avid reader, an observer of life and a lover of nature, her writings touch every aspect of life filled with the mellifluous tunes of space and time, the wonders of the beauty of nature, the hidden emotions that rule the human psyche. Her poetry continues to spread the fragrant aroma touching the hearts of the readers far and wide. Giti Tyagi was honoured, in 2019, for her contributions in the literary world.