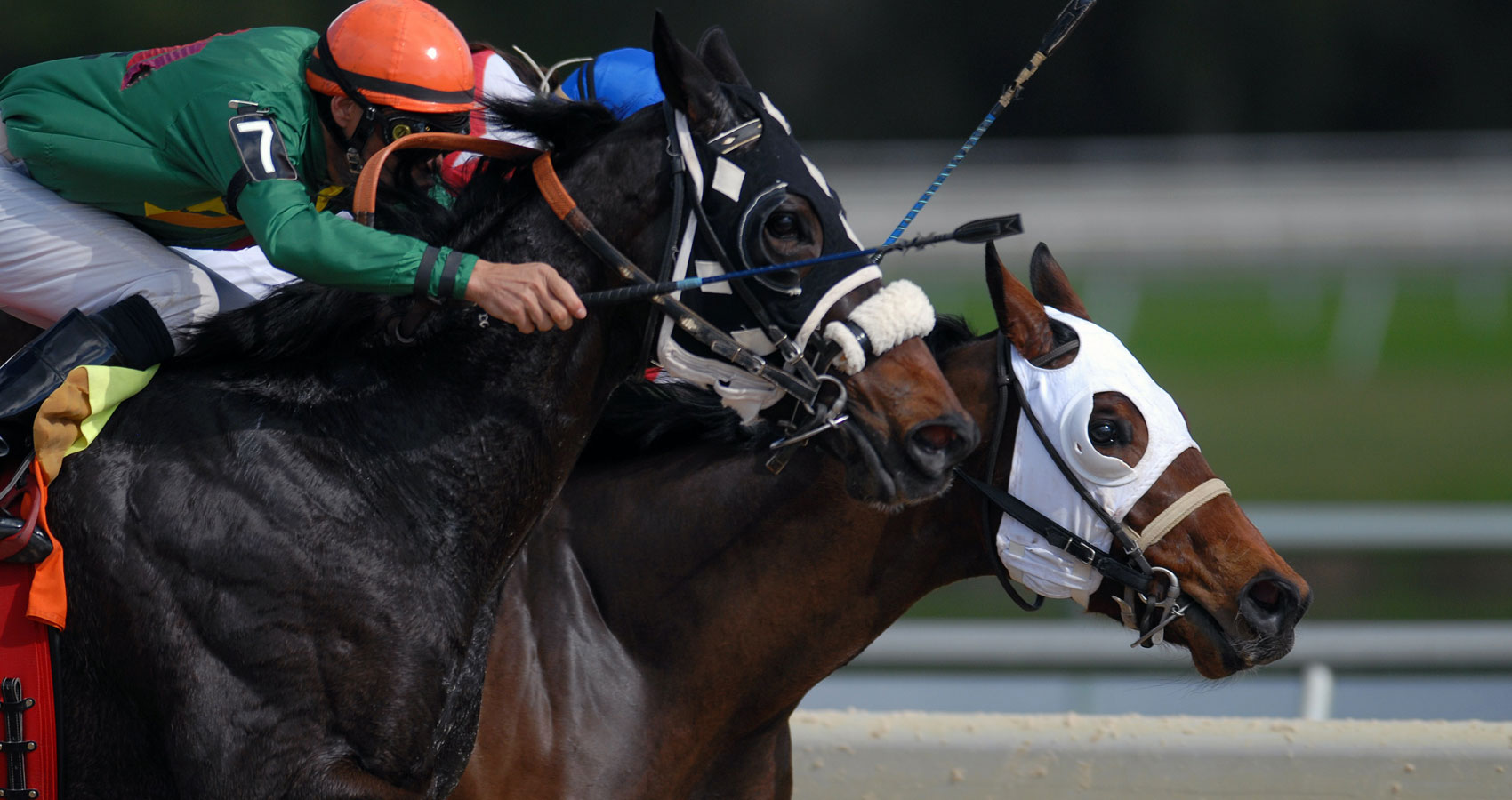 My mother must have turned some heads the day she dragged Matty and me to the Bay Meadows Horse Races. With her Movie Star looks, English accent, and two kids, who could have doubled as juvenile Laurel and Hardy stand-ins she must have made quite a splash.

But, it had seemed some of my ex-Stepfather’s more outre habits had rubbed off on her after four years of marriage to a man who considered himself to be a wise guy without peer.

Like most children, we didn’t want to go. After all, it was something new and out of our comfort zone. Plus it involved “gambling.” And since we didn’t have a pot to piss in back in those days, the idea of spending money we couldn’t spare seemed vaguely dangerous and catastrophic.

Still, we soon quit our wails and complaints once we arrived at this haven of horse race betting.

The horse track was redolent with the aromas of horseshit, cheap beer, and the great unwashed. The desperate excitement of the masses was so thick that it hung over the stadium like a miasma. The continuous roar of the crowd echoed over the hysterical narration of the track’s announcer’s voice who called out the exciting happenings taking place on the sodden race track below us.

Clueless we clutched our useless race track forms in our hands, often using them as visors or fly swatters during the races. But, what else could we do? The contents were pure kabala, a mishmash of statistical gobbledygook that meant little to neophytes such as ourselves. Their only saving grace was to list each horse participating in each contest.

“Oh, look at the horses, aren’t they beautiful? And look at their Jockeys, Boys. Aren’t they darling?!” gushed my Mother.

Gazing at the track below I beheld what appeared to be small men dressed in outlandish colors. Colors that seemed more suited to the circus than such a serious adult affair. And they were so short! Many of them seemed about my height albeit a hundred pounds lighter in frame.

But there they were parading in front of us, dressed in a veritable explosion of pink, orange and blue colors with matching long visored hats. Many of them seemed mildly bored as they trotted their charges past the reviewing stands.

I swatted my kid brother upside the head with my program. “Shaddup stupid. Can’t you see they’re midgets? Calling someone a dwarf is gonna piss ’em off. Geez louise, what a maroon.”

“Charlie, stop picking on your brother,” said my Mom, rounding on us both. “You are both wrong. They are just…er…very short men. Not “dwarves” and certainly not “midgets,” continued my Mother sniffing disdainfully.

Matty stuck his tongue out at me and I flipped him my middle finger when Mom turned to face the track.

“How about we bet on a horse. Wouldn’t that be fun, kids?”

“Let’s see if we can pick a winner, ” said Mom cracking open her program to the upcoming race.

Under the seventh horse race was a list of the horses participating. They all had unusual and colorful names. Some were downright funny to my young mind.

I wanted us to bet on Satan’s Twinkie while my brother opted for a horse named Montgomery. My brother was a rabid World War II film nut. So naturally, he picked Montgomery as it reminded him of the English General who helped defeat Germany during the war. I told him his choice was lame. After all, Montgomery always looked like a weasel in movies we saw on TV. But hey, so did my brother.

Mom immediately vetoed Satan’s Twinkie, saying the idea of naming a horse after the Devil and American snack food was disgustingly vulgar. “But how about this one, Boys?” she said tapping her program.

We crowded around Mom and squinted at her selection marked with a pencil. “Lil’ Matador, that sounds cool, Mom,” I said. “But, I want to bet on Montgomery,” whined Matty as tears and green snot ran down his face.

“Maybe I can put a small bet on Monty, my darling. But I have feeling Lil’ Matador is going to be a winner,” said my Mom handing Matty a kleenex to wipe his face.

“Lil’ Matador ain’t going win nuthin, Lady,” said a gruff voice behind us. “He’s a big mutt, slow as a mule and Squinty McPherson, his jockey, is a bonafide lush. Put your money on Sultan…now that’s a horse!”

We all turned around in amazement to get a gander at this oracle of gloom seated behind us. He was a dark-featured giant wearing a filthy San Francisco Giants cap that was several sizes too small for his head. His breath reeked of cannabis and race track beer. A man sat passed out next to him, with his mouth open, wearing a soiled pair of chinos and his fly open.

“Sorry to butt in, Just saying, Lady. Put your money on Sultan. Odds are in his favor. You’d be jest throwin’ your money away on that nag Lil’ Matador.”

“What about Montgomery?” whined Matty.

The large man guffawed as if my brother had just told him the punch line to a dirty joke, exposing a mouth missing most of his teeth, and dismissively waved my kid’s brother’s question away like a pesky fly.

“Thank you for insightful track knowledge, sir. But, my boys and I can make our own bets. Charlie and Matty let’s go down to the ticket window,” said my Mom picking up her purse.

After buying our tickets we seated ourselves in a different section of the stands, nursing our bruised egos from the derision we experienced when our Mom put a five-dollar bet to win on Lil’ Matador. Even the guy who gave us our betting slip seemed to find the whole thing dang funny.

“Lil’ Matador? Are ya sure Lady? Heh..heh. There’s still time to change your mind,” he snickered.

“Yes. Now give me my ticket,” said my Mother.

Mom snatched her ticket away from the clerk with as much dignity she could muster and promptly marched us back outside to watch the racehorses parade to the starting gate.

As each horse emerged from the holding area to promenade past the stands the announcer announced their names, number, and jockey. Some beautiful horses were filing past us. Their coats were shiny with sweat and their Jockeys looked like exotic birds perched on their backs. Sultan’s Swing, a massive black, was a favorite as his jockey dressed in pink, waved his crop gaily to the cheering and adoring crowd.

Just when it seemed that when all the horses had filed past, the crowd erupted into gales of laughter when a small white and brown pony abruptly trotted out of the holding area minus his jockey.

“And here’sss Lil’ Matador!” laughed the Announcer. “But, where’s his jockey? Looks like we might have a disqualification on Lil’ Matador in race numbah seven, folks.”

“I’m here. I’m here. Just wait a Goddurn minute. Get back here ya dang animal! I’ll turn ye into glue if ya don’t stop, I swear I will!” hollered a red haired jockey limping after Lil’ Matador before falling flat onto his face into track mud.

Squinty, Lil’ Matador’s jockey was helped to his feet by several track officials and somehow they managed to maneuver him onto Lil’ Matador’s saddle while he flung a litany of obscenities at all within earshot. Covered in mud, missing his green visor, and looking like a deranged Leprechaun, Squinty kicked Lil’ Matador after the already gated horses.

The crowd howled and stamped their feet at these antics as poor Squinty struggled to make it to the starting point. Swaying drunkenly in his saddle, cursing, and flailing his riding crop wildly he made a hilarious spectacle of himself. Track officials tried to calm him and Lil’ Matador down, but it seemed to make matters worse as Lil’ Matador bucked and backed away from the gate.

Meanwhile, men in the stands were laughing and pointing as we sat stricken in our seats.

“Stop! Stop! Oh God, I can’t take anymore,” wheezed a man sitting next to us in a blue nylon shirt, his beer belly shaking as tears ran down his florid face.

“Daddy, that man’s funny!” cried a little girl in pigtails sitting next to her father behind us.

We sank in our seats utterly mortified by the jeers of the spectators around us, hiding our faces with our programs as we assiduously avoided looking at the debacle taking place on the track.

That is until the starting bell rang and the horses surged out of the gate to start the race.

Sultan immediately took the lead while Lil’ Matador took off in the opposite direction of the pack causing the crowd to erupt in more hoots of derision.

Squinty managed to turn Lil’ Matador around and gain some ground but by the time he joined the rest of the pack the horses were already rounding the first turn with our horse dead last.

Sultan maintained his lead with Scuse’ My Bulge holding at second and Satan’s Twinkie at a comfortable third place.

You could hear the pounding of hooves on the turf over the roar of the crowd and the obscene cursing of Squinty as he raged in frustration at being last in place.

Then something strange happened.

As the pack approached the final turn, Lil’ Matador abruptly reared and shot forward and began to rapidly overtake the other horses with our jockey hanging on for dear life.

In unison we three surged to our feet, screaming our lungs and throats out for Lil’ Matador.

Soon he was in fourth as the pack came in sight of the home stretch. Then he moved to third as he overtook Satan’s Twinkie and then he passed ‘Scuse My Bulge. He then caught up to Sultan and the two horses were riding neck and neck with just a few lengths until the finish line.

As they battled to take the lead, their gasps for breath could be heard throughout the stadium, the sound of their hoofs thundered like cannons. It was Sultan in the lead, then Matador. Then Sultan and then Lil’ Matador. As they hit the finish line Sultan stumbled and Lil’ Matador stretched out his short neck to win by a nose.

The crowd erupted into chaos. But, hell we didn’t care.

Instead of eating Hamburger Helper for dinner tonight, it was gonna be steak.