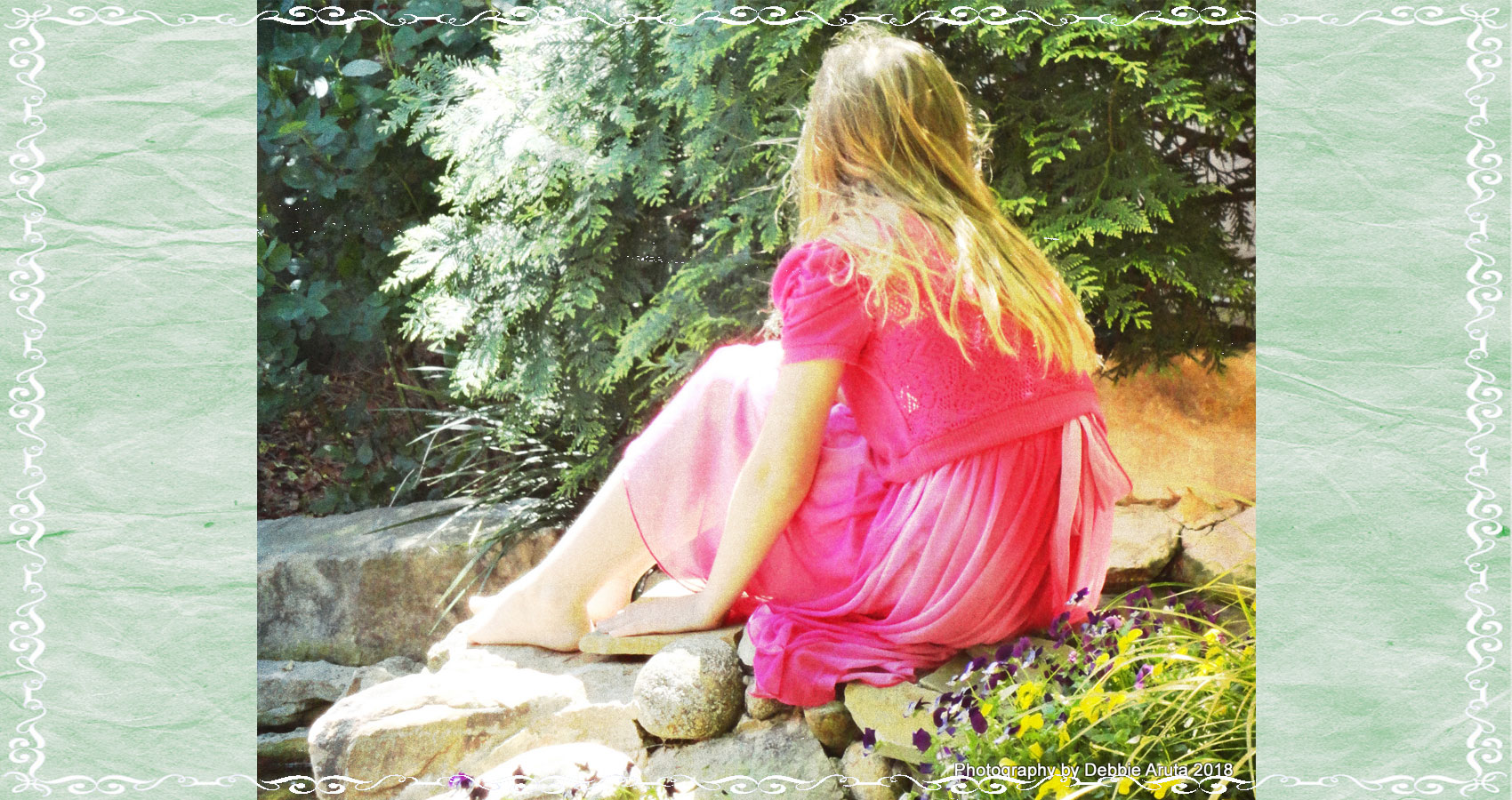 She sat out on the rocks at the edge of the water watching the waterfall. She dared not move. The faeries were dancing in the water. They moved about through the  summer’s bright sunbeams and she did not want them to vanish. She had only seen them once last year and yearned every single day since to see them again. The faeries lightened her heart with pure joy and jubilation. She was having a hard time right now in life and seeing them again made her forget all her cares even if it was temporary, but wasn’t everything in life temporary?

Lilly was a troubled child. She was physically and emotionally abused at the tender age of three. The abuse had only stopped a year ago when she turned six. She had thrown herself down on the ground and had a mental breakdown when her uncle came to pick her up. She’d had enough! Her uncle did things to her that no little girl should have to endure. He was in jail now, but those scars stayed with her. These faeries, this waterfall, the summer sun on her face, all of this almost made her forget the fear and feelings she carried with her on any given day. Today her heart was light. The faeries showed themselves to her again. She got to sit on the rocks and watch them dance and frolic in the water. Today she was safe in her own world of wonder and magic.

Lilly was vanishing into the faeries world when she heard her mother faintly calling her to come in for supper. Her mother loved her and was fiercely protective over Lilly. Even though it was her brother who had abused Lilly, her mother was the one pushing for him to go to jail. Lilly knew it must break her mother’s heart to be the one pushing him to jail, but Anna was a good mother and if she knew three years ago he was hurting her little girl she would have gotten him thrown into jail then. Brother or not, this was her child, and she came before her own brother.

Lilly had sauntered down the grassy knoll and strolled into the cottage. She instantly was comforted by her mothers arms around her. Anna told Lilly that she made her favorite, Irish Stew. Lilly smiled, but her mind was remembering how the faeries danced. She hated having to leave them at the water’s edge. Who knew when they would show themselves to Lilly again, but it was turning to dusk and soon would be pitch black and she knew they would be gone anyways.

“MOM THERE WERE FAERIES TODAY AT THE WATERS EDGE!!!”

Anna looked at Lilly surprised by her daughters fierce outburst. She stopped her fork halfway to her mouth and placed it back on the plate. Lilly told her about them dancing in the sunbeams and how they made her happier then she had been in the years following the abuse. She tried to explain to her mom how they took her fear away, but her mom only looked sad.

Anna listened to all Lilly had to say and then Lilly stopped talking and just looked at her mother. Anna remembered how hurt Lilly was before when she did not believe her. Instead of saying she believed or not, Anna suggested that after dinner Lilly draw the faeries out for her so she could see what they looked like and she could understand what her daughter had seen. Lilly beamed and then nodded yes.

Anna cleaned up the Irish stew while Lilly lay in front of the large stone fireplace that took up a whole wall in their tiny cottage. It was a huge focal point of the house, but it was also their main source of heat. Lilly drew for a while then crumpled up the paper and tossed it into the fire and started again. This went on until Anna sat down, grabbed her knitting, and glanced at her daughter ferociously drawing away. Lilly leapt up and ran to her mother thrusting the paper at her mother. Anna looked at the faeries. There was so much detail. The tiny legs blurred by motion, the wings fluttering so fast that they looked huge in the tiny detail Lilly drew, and their crown of flowers adorned on each of their heads. If Lilly was making it up she had a very vivid imagination. Anna’s heart sunk. When last she thought Lilly had a very vivid imagination it turned out her own brother had molested and bruised her little girl. This time she looked at Lilly and she believed her little girl saw faeries that day. Anna told Lilly it would be their secret.
Later on that night Anna tucked her sweet innocent child into bed. She noticed some lights flickering out her window and thought it was a reflection from inside her daughter’s room. She turned to see what could be causing it in her child’s room, but nothing was on except Lilly’s nightlight. Anna told Lilly she believed her, but she had her reservations. Those lights outside could be anything, but Anna decided to believe they were faeries now watching over her sweet daughter. Lilly could use all the protection she could in life and Anna thought to herself that she was thankful for faeries who would care and comfort her daughter. If they were real or not Anna did not know.