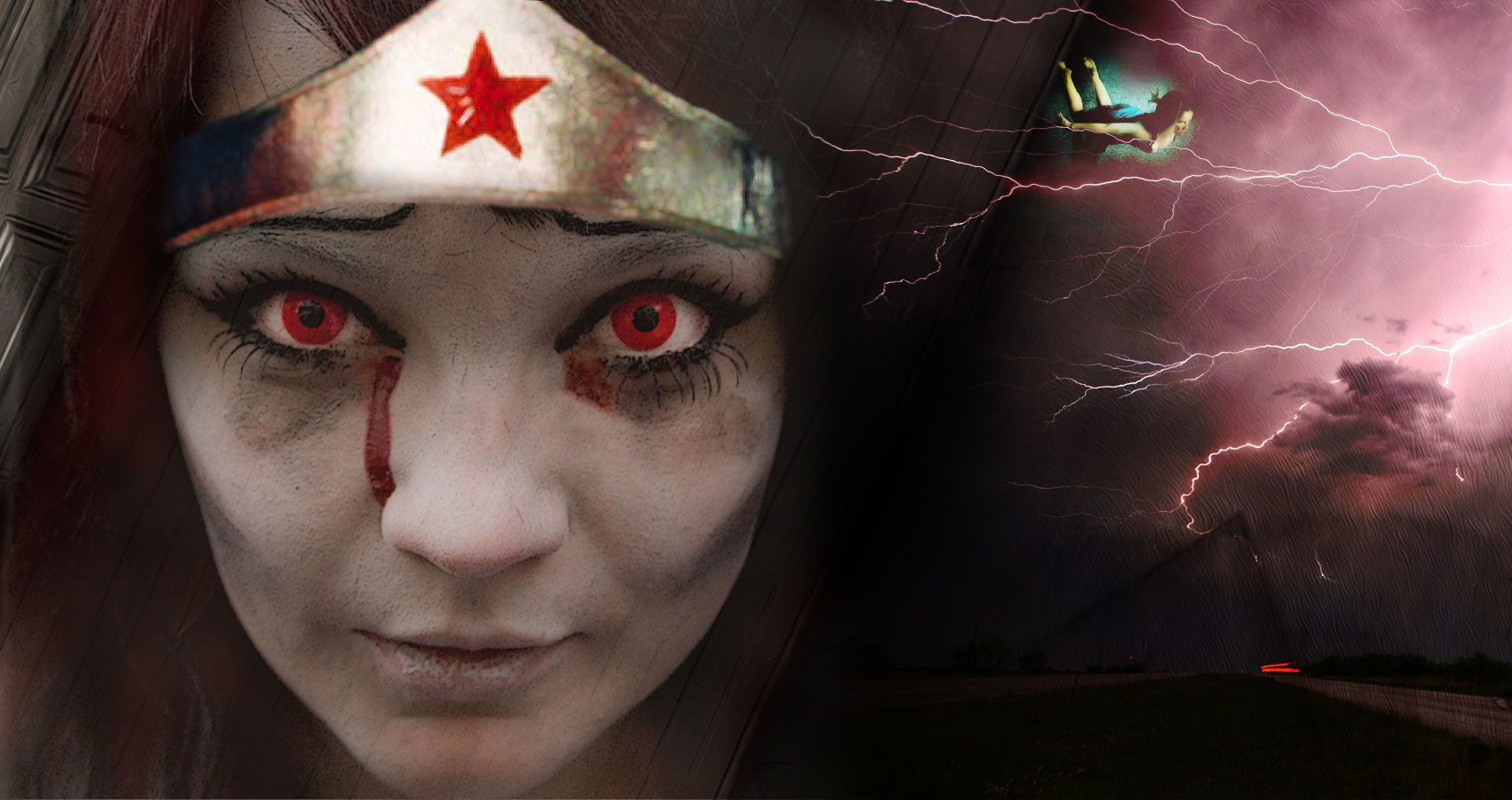 Lucy looked into the Coracle and could see a small boy weeping red frozen tears then looked up at Oah.

I am a radioactive rocket
I am an electric eagle soaring across the sky
I’m traveling too fast to tremble
but the skips in the air I must call turbulence
I had never been out of my little town on an actual plane
now I was ripping through time and space as a sky torpedo
I looked at my Coracle – I could see Oah’s grandson getting closer
I could hear his cries
his name popped into my head
Zeek – I thought – hang on Zeek
I heard a cry louder
did we have telepathic highway between us now too?
my skin was melting in the sweltering sweat raining from his fever
I had no idea how long I was flying
I began crashing through the Ghosts OF Limbo
hanging from stars between heaven and hell
their energy slowed me down and several arms grabbed at me
“Take me with you back to Earth” they cried
I wanted to save them from their waiting
I had my own uncertainty to deal with
the gauge on my portable generator seemed to be dangerously low
the climate changed from warm to ice cold and back again
Was I closer to the North Pole or the South Pole now?
My heart raced as my body lost altitude suddenly
swiftly turning west into a jungle
oh no, I started spinning like drill through a tangle of trees
I could see people on the ground as small as red ants

Suddenly I felt sting through my arm
then a blast of gunfire
These people were shooting at me!
Bullets were flying around me then through me
My skin became an electric blue colander
I fell screaming into a nest of vultures
they looked at me and sneered
I must have looked like the perfect dinner
The male vulture opened its beak took a bite of my face
Zap!! The vulture dropped to the ground – electrocuted
That was good to know
if any of these beasts tried to eat me
hopefully they would die

I fell off the nest’s edge and my body crashed into the ground
I was surrounded by reddish-purple people
holding swords
swinging them toward my limbs
They spoke in a language I couldn’t begin to understand
The only word I thought they might know
“Zeek”
They stepped backwards for a moment
then looked at each other
in unison they raised their swords then stabbed me
Zap!  They all flew backwards electrocuted
their bodies caught on fire and burned as they wailed and screamed
I stood up pulling bullets from my bones and skin
my left leg was a map of exit wounds
I limped through the burning bodies and looked at the Coracle
I could hear Zeek’s breathing now
I hear his blood pumping like a river rushing through a glass tunnel
I could smell the remains of a lamb they ate for dinner
but not Zeek
he had the smell of acid the fear of a child alone in the world
I knew his father had been freshly killed
then I saw his soul above me as a single dove’s eyed wing
“Go” I heard
I limped on grabbing a tree branch to lean on

I rose into the dark vast devastation of desolate souls
I trembled then felt a shove
invisible bodies banging into me
then pinches like small knives
then creatures biting into my skin
their orbs becoming more visible with every bite
I dropped several feet losing altitude
screaming “get away from me”
The deafening sound of lost souls
desperate for answers
“Take me back to earth!”
“Where am I – please help me!”
“I’m not dead, I can’t be dead”

“Take us back to earth.  You are the Soul Whisperer”
“You can make us undead”

I could finally see them – Vampire Ghosts!
ravenous dragonlike beings
hollowing out my brain
making room for themselves

“We will kill you if you don’t take us back to earth!”

I felt faint and losing altitude when suddenly
Three bubbles of light circled me
I could see their translucent curled bodies
with hearts of flowers blooming white lilies
what were they?
Fetuses with eyes open staring at me

“We are your brothers and sisters – we never had a chance to be born.  We’re here to help you”

I remembered my mother mentioning she had three miscarriages

“Go back, dear ones, it’s too dangerous for you here”

I could feel the echoes of heaven calling them back

and faded into the new diabolical darkness

“Look at the Coracle”

I wearily looked down at my bloody palm
I saw panels — and light
What?  I was delirious as I was thrown smashing into invisible bodies and walls
disintegrating

What kills vampires that was within my reach?

the sun beams strengthened me suddenly
Solar energy of course!
I wished I had thought of it sooner
as my remaining skin became solar panels
absorbing every ounce of sun
fueling me gaining speed
now a rocket back to earth

“Hang on, Zeek, we’re almost home”
I could feel Zeek laughing against my shoulder
and a hot rain healing my skin in mid air
tears of joy

I saw Teri sitting filling out a chart
I was more horrified than the last time I had seen her
her body slumped, surrendered to a lifetime of sorrow
Her face collapsed from the weight of our father’s abuse
and the decades of psychological and physical abuse
of her wreckage of boyfriends and husbands
Now her eyes were dark caves permanently purpled and rimmed in red
Almost completely obscured by mountains of swelling rising to horizon her lower lashes
her lips sealed in permanent silence
only a pitcher of sangria could unglue

She whispered her lips and voice in weary tremble

“No, this is real.  I did come to you in dreams to convince you to leave the last scumbag…”

Teri looked around, apparently thinking she was hallucinating
I had come to her in dreams to try and help her heal and leave her third sociopathic creep of a husband

No luck.  He finally left with half her tiny savings and the Chevy she had just paid off

“Teri, take him.  He’s sick with some extraordinary fever and bullet wounds.”

I put Zeek in her arms

She dropped the chart and pen and rushed with Zeek down the hall.

I telepathically spoke to Zeek as I left

Zeek waved and smiled, but I knew he was terrified in human arms.
Just as I was most of my life

As I descended just above the cemetery, I was shocked at what I saw:
The entire graveyard was a forest of frozen corpses standing upright
sparkling in blue ice glistening in the midmorning sun
I found Oah among them and flew to him
There was no sign of any life or spirit presence I could detect
I put my ghost hands on his face
My hearing was starting to return but it felt like I was speaking under the center of the ocean

There was no response from this world or the next

But then I heard some sort of high-pitched static and looked at my hand
The Coracle was still working!
I could see Oah’s face as he must have been alive
It was like Facetiming with the dead

“I’ve crossed over, Lucy, and I am overjoyed that you saved my grandson!  Please contact my wife Nallia, and tell her to go to the hospital.  She will be thrilled.”

“Of course, but what about you?”

“You accomplished my goal for me.  I can rest in peace.  Nallia will explain what happened.  I can visit Zeek now whenever I choose.  If it is not too much trouble, kindly find a way to have our bodies rest in the ground again.”

I was about to fly off to bring Nallia to Zeek, as I turned around
John was standing, quite electrifried, jumpy and nervous
as if he was hopped up on some new drug
I could hear his electrifired pulse racing

“Where do you think you’re going?”

“I have an errand to run”

“I don’t have time for your petty greedy bullshit!  That money came from murdering me and I will use every penny to avenge your heinous acts and the crimes of the family.  We have to bury the bodies again.”

“There’s no ‘we’ anymore.  You are mere blue dust blowing in the wind.”

“I’ll burn them all in a big graveyard pyre and watch them toast like marshmallows in the flames.”

I listened for a response from Oah, but there was none

I looked down at the Coracle then up at the sky

This trinity of light and energy as a three-volt stream of light stabbed John like a sword slaying him in half, his unholy undead flesh burst into flames and disintegrated into a pile of evil’s ash

Back in the hospital room, I entered with Nallia who ran to her grandson crying and kissing his flushed face

Nallia could only laugh and hug her grandson as I looked at my sister, still overwhelmed by what the past few days had brought her.

Nallia looked at me to thank me and Zeek smiled.

“You should have your dream come true too, Lucy.  Frank wants you to finish your dance.”

I smiled and nodded, wondering how I could ever dance on earth as a ghost.  I wasn’t even a zombie anymore.  How could I possibly regain a physical self?

I flew out of the room and traveled down the hallway to a research facility.
I looked down at the Coracle and could see cells multiplying.
Two words popped into my head –
Stem cells

It took months creating stem cells in the hospital laboratory
being a ghost was easier
I would simply start my shift when the scientists ended theirs
I went back to the scene of my death
John did such a sloppy jobs of burying me in the shallow grave under the shed
I dug up bits and pieces of skin and blood and a piece of nail
then added mine to piggyback one of the existing stem cell experiments
blood cells were quite fascinating to watch multiplying
while I waited for my stem cells to multiply
I gathered stray bones from the forgotten bodies that were never buried or cremated
I found an abandoned warehouse where I built a new skeleton I could occupy
I studied electrical systems that might work to create electrically activated muscular system
I wove wires into a tapestry of blue and yellow and red
I watched my stem cells multiply and took them back to my new “body”
injecting the stem cells into the bones, bits of skin and organs including part of my brain I found in my shallow grave that I sewed
Magically they fused together
I created – a lifelike sculpture of myself – part zombie, part Frankenstein, pulsing with electrified hope