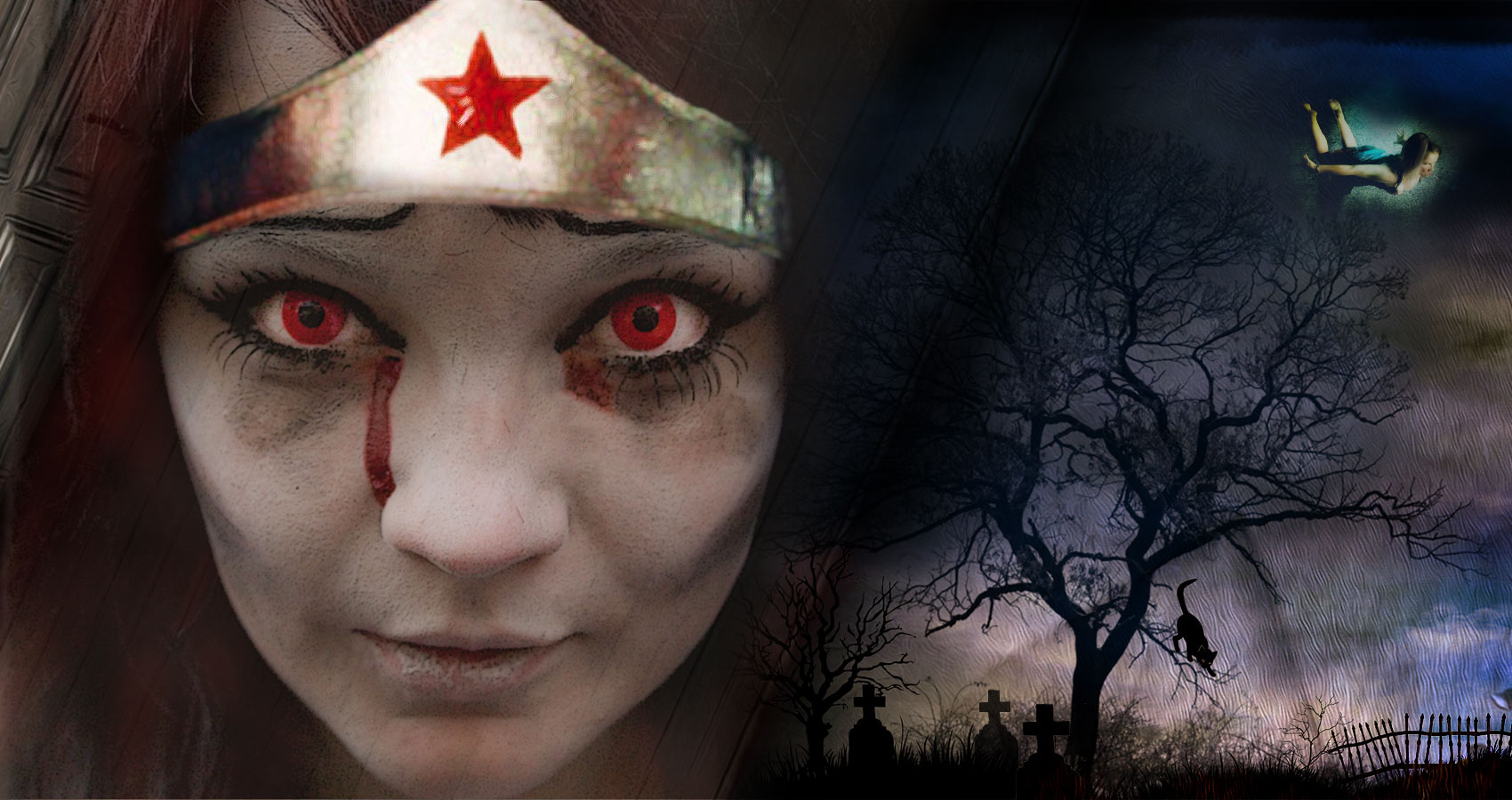 ZELTERGEISTS RISE AND RESCUE (I)

I wondered about my undead life
as a rebel zombie
a vegetarian, no less
I did not want to bite flesh
instead I wanted to honor the dead
be in service of peace
not jagged revenge
and fulfill the dreams I never had time to
when I was alive

Suddenly a preternatural moan
I shuddered and crawled into a corner as if I was a child again
hearing my father in a drunken stupor creaking down the hallway
about to bash my brains in for doing homework in the dark
too scared to sleep?!
Even as a ghost he prowled in preternatural rages fists pounding
from eternal darkness of evil
and that was just family

what sound was this that had my heart racing trying to escape my chest?!
a crackling of grains of bone breaking or unbreaking
or was it a burning fire from a mausoleum in hell
ghostly ghastly hands frantically hammering
trying to get from the underworld to this one

They entrusted me with the task of converting their
ghostly beings
into zombies
so they could travel the world as I could
Visible
almost human
almost alive
my only fear was — what if I couldn’t help them transform
into zombies?
What then?
Too late to think as galloping thunder tore
through catacombs of clouds
raising a century of bone dust as unholy halos above my head
outside my window
a rumbling
under my feet
Suddenly
I was being summoned
Satan’s choir was singing in a corner of my mind
as a gory gospel spilled a scripture of blood and new flesh
breathing with the lungs of the dead
It was time for the skeltergeists to rise again
and become a new kind of monster
a new kind of terror
I did not know the name of
I shuddered and felt faint
a force from hell lifted me and threw me against the wall
like a rag doll
however
this time I would not crumble

Now my research had to pay off
How could I bring one hundred skeltergeists
back to life or at least an undeath
with movement
my hope that they could retain all of their powers
that I witnessed
to walk through solid surface
invade the dreams and nightmares of humans
help humans still alive who may be in danger
by other humans
I wondered who were the real monsters?
We were all unjustly killed
or unjustly left to suffer death without a proper burial
would the lost soul of each skeltergeist return to its host
was mine still intact?
I felt it was as what else could be guiding me on this new path?

I called on my electrifried mice for help
I started doing stem cell research
watching the cells multiply
tiny sparks of electricity luminated the cells
I injected the stem cells into my burned skin
it caught on fire
I jumped up running around
then suddenly the flames turned into a kind of melted bandage
My skin was healed!
Now it glowed with a new bluish-tinged light

I decided to create a skeletal structure that would
feed a steady flow of electricity for ease of movement
if I could fly two miles on a tiny lightning volt
how far could I fly with a full engine –
like a plane – hundreds perhaps thousands of miles?

Finally a face I recognized the most – the leader – Oah – rose up completely
now appearing before me.  He was still translucent — I could see his skeleton – the broken bones rattling within him.  I could see the pain they must have caused him.

“Hello, Lucy.  Thank you for burying us.  We have rested enough.  We must proceed with our plan.  My children and grandchildren are crying in their dreams to me for help.  We must rescue them from their captors.”

I fumbled for words but none would suffice except –

But of course so far I had been the only one to fly with the bottled lightning and I needed more information.

“A zeltergeist.  All the abilities of a poltergeist, a skeleton, and a zombie rolled into one.  I’m hoping the lightning I captured will help you fly to your destination as fast as the wind as I did.”

“You flew?!  Like a bird?  This would be beyond my dreams.  I must get to my family.  They are being held hostage in Ghazzlia.”

“Better you don’t — but it is thousands of miles from here.”

“I– only flew two miles– I doubt there could be-”

“One step at a time.  Forgive my impatience.  My grandson is sick and I need to bring him back for medical care.  Please, if you would, charge me up with this electricity.”

My electrifried heart was beating so fast, nearly jumping out of my chest.  I thought my ribs were breaking I was so nervous.  This was the moment of truth.

My hands were trembling as the other ninety-nine skeltergeists looked on from a few feet away.  Somehow I managed to steady my grip.  Fear and failure were no longer options.

There was no more need for words as I threaded the wires throughout his body stitching into and around his ribs, sometimes realigning his broken bones to strengthen his structure.

“It stings!  My body is a hive of activity!”

I started to panic overwhelmed.

“No, no, Lucy, this is the sting of life – a rebirth.  A magnificent healing I never felt when alive!”

Then I hooked him up with a portable electrical generator

Oah seemed to be in a meditative state, praying words I could not understand except they must be words of hope
and promise
I must help fulfill

I flipped the energy switch to the generator – ON

His body bolted into the air.

He was quite stunningly beautiful.  A new kind of moon and bird in one – literally a body electric

Oah screamed into the night

“My bones are virtual tuning forks.  My heart is a giant resonance box.  And I’m flying!  Let me go, Lucy, I’ll go right now and get my grandson.”

How could I reason with this supernatural being now stronger and more powerful than I was?

“You need an army, don’t you?  You can’t go alone.  Come down now.  We must go step by step, right?  Even one more day, please, so I can electrify the others.”

“Yes, you’re right of course.  I’d just like to fly for a bit though.”

He scooped up the sky and I ran to follow him as I rose above the earth too.  A perfect test flight.

“Go now, Oah, before he gets any closer!”

He takes her hand and opens her palm, quickly drawing a deep circle which cuts into her flesh like a knife

Lucy looks down – like a window into an abyss

“It’s a Coracle – a telepathic compass and oracle.  It will guide you to my family.  Go before
you are frozen too.  I’m losing my memory – how to remember to speak”

Lucy glares at her undead brother.

John laughs as sinister as the devil himself, his eyes more wild and glowing as never before

“Who, me?!  I just brought back two hundred and thirty-seven of this town’s deadest residents.  What harm could I possibly do?  I do plan on making a withdrawal from the bank.  Time to build a new house.  Pre-haunted this time.  I bring the ghosts with me now.  My eternal evil entourage”