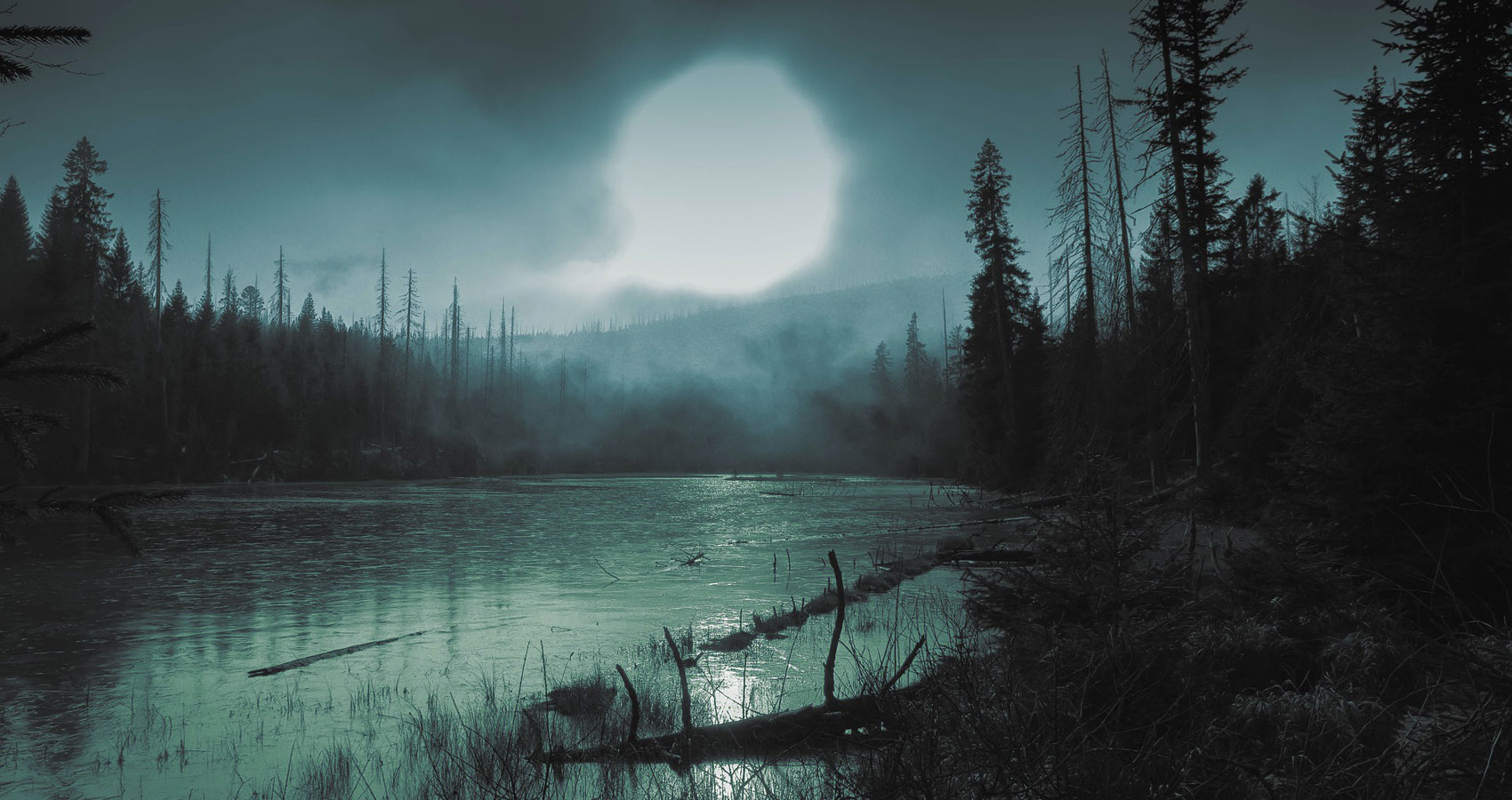 Grendel’s mother wanted murder; but we all knew that,
you knew that just by looking at her:
the green and odorous skin like dark olive parchment over her cheeks’ low bones,
the blackening teeth where the stale blood caked
and dried in her receding gumlines
like burgundy ink on her molars and incisors,
and a blackening-scarlet
stain on her canines.

Remember when we first saw her —
her flaccid breasts like flour-sacks,
her womanhood a stagnant moss,
the cadaverous, driving
lime of her hips,
her labia in livid lines
of bitter water lilies?

Remember the rising, putrid moon of her —
her green, sour form arching over ours in her ascent,
burning up from the green lake, a gangrene flame from the brackish water,
her profane grin adorning her,
and algae tracing her lips?

Remember the wet weeds
trailing the viridian strait of her throat
like silt-laden necklaces,
and all the mud and water rolling off her knuckles?
The spoiled laurel of her sinewed shoulders,
her outspread arms and their
parody of embrace?
Remember her mocking our own mothers?
Her derisive voice was like
the crack of splitting emeralds, asking,
“Am I so strange to young eyes?”

Remember the boiling fat on her tongue and
her victims’ burning skin there?
The scalps she held in her upturned palms
were like watery garments.
Her talons were as black
as snapping-turtle shells.
We all knew at once that we were quarry.

Remember her
sorrel-colored cataracts?
Her eyes were as green seas
boiling under Ragnarok.
Remember their ruptured capillaries
like collapsing red galaxies?
Remember her very irises bleeding?

But what if evil appeared
not as the face of Grendel’s mother,
but, rather, the ordinary boy in her maw —
as unexotic and as common
as we are?
If we were boys and girls again
and bored in English class —
maybe at Beowulf’s strangeness,
or maybe the strangeness of Jung —
and he were next to us,
with neither green skin
nor blood along his molars,
if he wanted murder, could we tell?
His face was as a clock’s face — prosaic and round.
Neither silt nor sinew lined his frame.
His gaze did not depict a grisly cosmos;
no galaxies had hemorrhaged in his eyes.
Would the difference be perceptible there
between wanting to kill time
and wanting to kill ten?
Would we know that we were quarry?

Tonight we’d like to believe
that the young are strange to old eyes
for any resemblance would kill us,
as Medusa’s own face was fatal
to her upon the shield.
As adults, we understand
that Beowulf is only fable —
but that Jung’s reservoir
is a fatal green lake.
Better an Idis than likeness —
if a monster looks like us, it stands to reason
that maybe he could BE us,
we’d nag in our primordial minds.
It might make us envision
a kind of reverse baptism:
our own plain faces
cresting the flat, green waters
to glide across the lake,
but bearing the eyes of strangers,
emerald and seething,
irises bleeding,
crushed green reeds in our jaws, like captive verses …

And we could not suffer the thought.
Better to be quarry, or be drowned.
We’d know that, and so
we would run mad, we would run weeping, we would run forward and ravening to the green, forgiving lake,

where we could sink like Beowulf,
and our silenced lungs would fill with water.