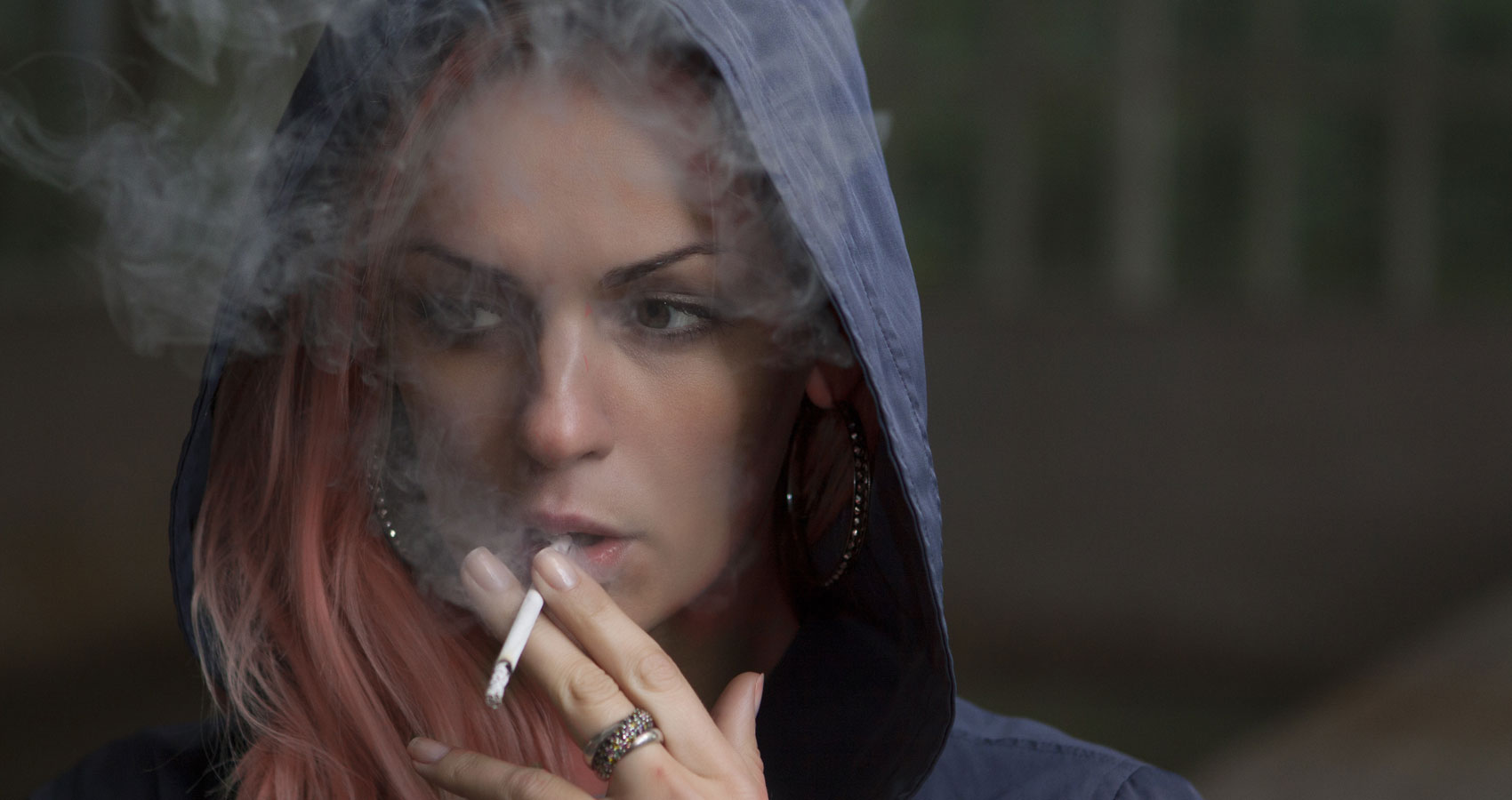 Slum Flower’s Not So Elegant Death

Slum Flower’s Not So Elegant Death

Even daybreak didn’t slow the lot lizards from stalking the truckers. From her Mazda she watched a lank, scraggy ash-blonde be devoured by the sleeper cab of a Peterbilt. It was approaching six, Turbo Jesus was late, and she was getting restless. She tossed the butt of her cigarette into the grass and then lit another.
An 18-wheeler belched diesel into the air as it left Big Boys and pulled onto the interstate. Intermixing cooking grease from a nearby grill with the smell of petroleum. Her thoughts tumbled to the mundane: the steady metallic din of cars pumping gas, the languid whack of traffic moving across an uneven strip of asphalt, the occasional passerby who side-eyed her stashed away location in the far corner of the parking lot.
As she waited, her restless fingers moved across the surface of her gauzy skin, flinching where a needle had once breached her flesh. Her abuse of heroin had stripped the pregnancy fat from her body, turned her skin slack, face pale, and veins into knotted pantyhose. There were reminders scattered everywhere on her arms and legs. And one particular spot in the bend of her right arm where months ago subtle streaks of poison had branched into tributaries and hurried towards her heart. Not long after she developed a dry, punchy cough that surfaced from time to time.
When she interviewed at a nursing home two weeks ago, she wore long sleeves to keep her defects hidden, and to keep her fingers, which were adept at locating every raised pimple, from picking and scratching. Her other flaws were more difficult to hide with clothing. The permanent bags under her eyes, the sunken cheeks. She was certain former drug addict was stenciled into her forehead. The pudgy human resources lady, Marge, with an abundance of hair and make-up, didn’t flinch at her appearance. She barely lifted her eyes from the pile of paperwork strewn across her desk. “You start in two-weeks,” she said.
Nursing homes were desperate to hire anyone, and for good reasons. She’d left the facility laced with the smell of urine and the haunt of vacant wrinkled faces etched into her brain. It was a sober reminder of how far she’d fallen.

She circled the truck stop like a buzzard over a corpse. Throwing promises into the air. I can’t stop. I won’t stop. But then she found herself parked in the corner. Her thin frame consumed by her sweat pants and Carolina hoodie. Restless, she rubbed one leg against the other. Her unshaven, dry skin bristling beneath the oversized cotton. She needed Turbo Jesus to get her through her first shift. After that, everything would be okay.
She catnapped, waking at one point to catch sight of the lot lizard sliding her half-dressed body from the Peterbilt and heading back towards the truck stop to wash away the trucker. It wasn’t that long ago that she fucked strangers. Taking their raw, veiny flesh into her mouth for a fix. The resurrected memories of these vile men sent her heart pounding, and she cracked the car door to avoid being choked by her past.

It wasn’t the birth of her baby that wrenched her life from normalcy. It was the slow isolation from everything she knew. From her job, her friends, and even her husband. After she gave birth, they fought about everything. Who would watch the baby? Who would sleep and when? Who would get up in the middle of the night? In those first months, her baby wrecked her body and her mind, and she no longer wanted to be present in her own life. She headed back to work after three months. Working twelve-hour night shifts on the mother-baby unit. Everyone said it was too soon. For her, it was easier for her to care for someone else’s baby than to find a way to bond with her own. Maybe it was postpartum depression or that fact that she never could trust the divinity in herself. But one night, after a rough shift, she lifted a Percocet from the Omnicell to help her sleep. Before long she was diverting the medication ordered for her patients. The drugs dulled everything and took the edge off her guilt. Three weeks into the pills, and after an introduction to Turbo Jesus, she shifted to heroin because it was a cheap alternative and less risky than the prescription painkillers she was stealing. But she’d gotten careless and desperate, using and stealing up to eighty milligrams of oxy a day. The hospital caught on and she was fired.
Now she was clean. She’d done the rehab, gotten her nursing license back and was ready to work her way back into society. But that wasn’t enough to stop her from making the early morning phone call. Old habits don’t die.

Turbo Jesus drove a loud, overhauled Honda Civic with turbo spray painted on the rear quarter panel. The first time they met, he nicknamed her Slum Flower, because she was a tall, thin, redhead whose hair spiraled around her well-tanned face like the petals of a sunflower. From his hatchback, Turbo dispensed anything you could need. Substances that would hijack your brain and carry you into a drug-fueled nirvana. Turbo Jesus was her savior.
She ran her hands under her sweatshirt, over her once engorged breast that were now deflated versions of their former self and rested them on her uterus, now empty of the daughter being raised by her mother. There was an ache of loss as her daughter’s smell was still present on her skin.

Rock bottom is different for everyone. Selling your body. Destroying your relationships. Abandoning your child. She’d checked all the boxes. But her low point was marked by how far she’d fallen. Homeless, she began sleeping under the Tulip Street bridge underpass with an encampment of users, who in a haze, scratched and shuffled their way throughout their day. It was a community of despair, sheltered by a handful of pitched tents and tarps. Needles, used syringes, spoons with blackened bowls, aluminum foil, shoes missing laces because they were used as tourniquets cluttered the ground. It was the kind of place where keeping track of who died and how often the ambulance frequented became muddled. She slept on one of the mattresses piled alongside the makeshift tables where users cut, snorted and cooked together. Bodies were strewn about as if caught in a blast wave. Heads hung limp as if they carried an unbearable weight. Some bodies were half-propped against a chain-linked fence that bifurcates two worlds, and others were sprawled across the earth, which made it difficult to tell who was dead and who was close.
A Hispanic known as the Doctor worked from behind a bed sheet strung between a shopping cart and a utility pole. He charged a couple of dollars to shoot up those who couldn’t do it themselves. She’d seen the bodies of the overdosed pushed into the weeds. And watched others nod off for days, their breath slowed to a soft hiss. Sometimes people living on the other side of the bridge would have the police root the users out.
She tried to quit once. Made it three days. She knew people didn’t often die from withdrawal, but she bet they wish they had. It was as if her body was waging a personal war with itself. Everything hurt. Her hair. Her fingernails. Every muscle fiber that ran through her body pulsed with crippling pain. The demon inside her was attempting to claw its way out.
On the third morning, she wretched with such violence that her intestines knotted upon themselves and chunks of clotted blood splattered the sidewalk. Someone from under the bridge dosed her with Suboxone and dumped her at the local emergency room.
After recovering, her husband had her committed to a psychiatric unit and then to rehab. She attended NA meetings for months in an old church between a Circle K and Waffle House. Ex-users like herself huddled in the worn wooden pews seeking redemption, soaking in the theology that gleamed through the stained-glass windows as they drank stale coffee from Styrofoam cups and clenched dog-eared bibles in their white-knuckled hands. The freshly minted sobers, unsure of their commitment, would leave needles in the holy water basin as they entered. And sometimes they’d snatch them when they left.
She realized as she waited for Turbo Jesus, that she would never be clean forever. That in a matter of seconds she could change the way she felt. Make it all go away. That she was irreparably broken.
Ten minutes after Turbo passed the purple-tinted packet through her window, and called her Slum Flower with a wink, she pushed a fresh needle into her flesh and dumped the heroin cut with Fentanyl into her veins. Her death was less than elegant in the parking lot of Big Boys truck stop, just off the interstate. A needle dangling from her arm. Her breathing low-pitched and scarce, a soft gurgle locked deep down in her throat as her lips, and then the tips of her fingers turned blue, purple and then black.