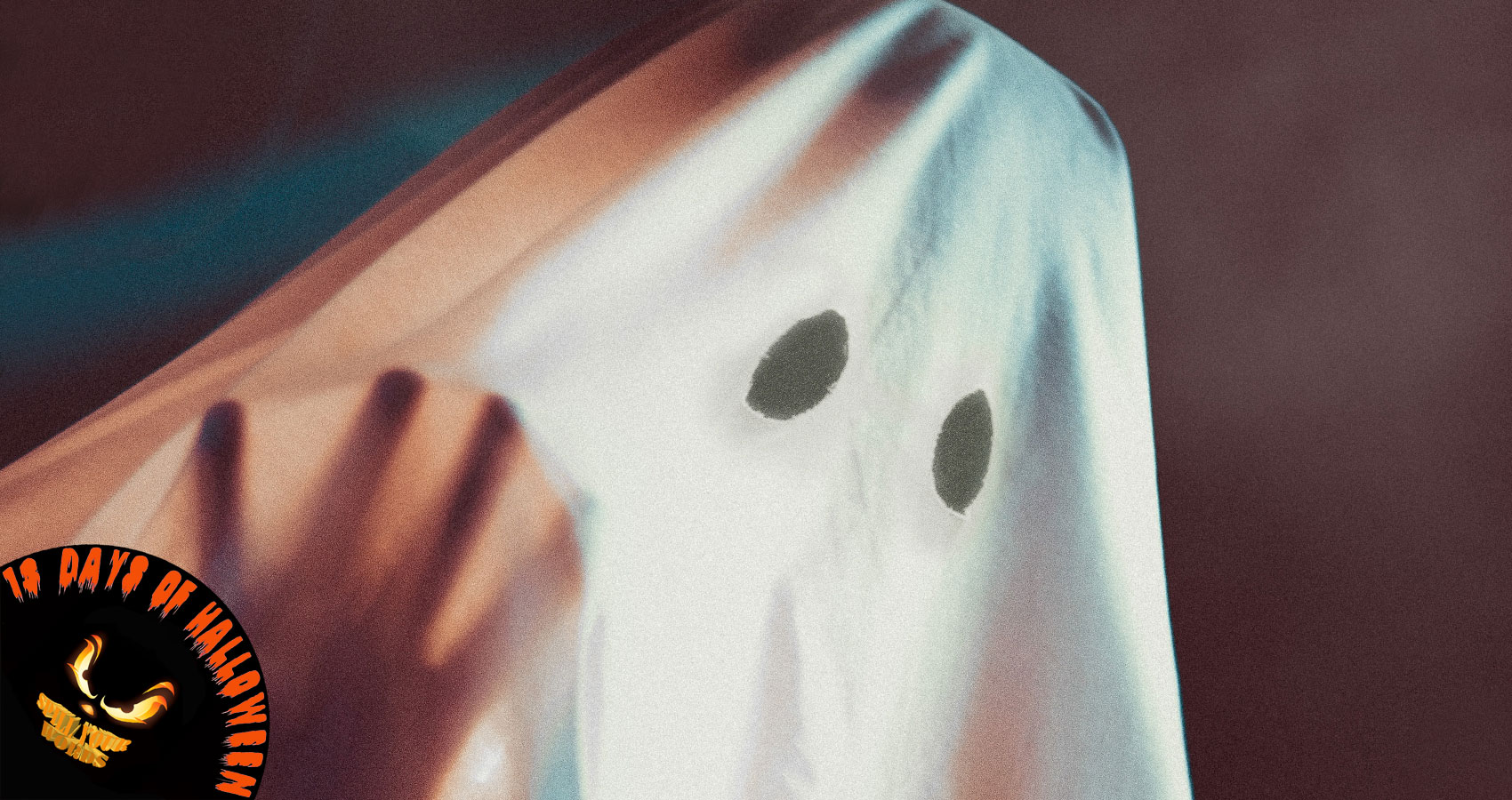 “Don’t know why they ignore me,” thought the boy. “Must be my costume.”
He picked another chocolate bar out of his bucket and un-wrapped it. Lifting the sheet, he moved the chocolate up to his mouth and munched down.
“A ghost,” he thought. “The best I could come up with was a ghost.”
His mother had sacrificed the sheet and helped him cut holes for the eyes. When he’d told his friends about his costume they politely declined to go trick or treating with him. His mother found him crying on his bed. When he explained, she suggested that she could walk around with him. That horrified him more than not going with his friends. In the end, his mother agreed to let him go off on his own, though he did notice the look of worry on her face as he walked away. Her last words were that she would meet him out front of the last house on the left on Elm Street at seven o’clock. That left him an hour to comb the suburban streets for those willing to part with candy in return for no tricks being played.
All went well. He peered down at the stash sitting in his little pumpkin-shaped bucket. It was full to the brim with chocolate bars, individually wrapped candy and other assorted sweet treats.
He finished the chocolate and unwrapped another. He figured he could get through several before his mother arrived. He’d tell her he only had a couple. He tossed the wrapper and fed the bar up under the sheet.
The sound of voices to his right grabbed his attention. He saw a small group of trick-or-treaters approaching. There were a couple of superheroes, a stormtrooper and a giggly pink witch. A father walked with them, holding the little witch’s hand as they crossed the street towards him.
The entire group ignored the boy and the little girl peered up the garden path leading to the house. She squealed and cowered in fear.
“Daddy, no, don’t wanna go in there,” she said.
“That’s okay honey – we don’t need to; there are plenty of houses around the corner,” he said.
He looked at the house and his face showed a touch of fear as well. He grabbed his daughter’s hand tightly and dragged her away, ushering the rest of the group along in his wake.
The boy watched their antics in confusion.
Once they were gone, he turned and stared at the house himself. There was nothing scary about the place.
It was a modest suburban house with a white picket fence in front with two small brick pedestals flanking the path and holding up the front gate. The grass was meticulously manicured, the trees trimmed to perfection. The garden path consisted of a series of pristine paving stones leading up to an inviting front door. Beside him, the front gate was freshly painted and shone brightly even in the diminishing light.
The boy shifted his weight around on the pedestal he sat on and looked up the street hoping to spy his mother. It was getting pretty dark and he was surprised she’d left him alone for this long.
He picked out another chocolate bar and within a few moments was munching happily on nuts and chocolate.
The voices of another group wafted towards him. From this distance, he was sure he recognised a couple of the boys from school, but as they came closer he saw they were all about his age but he didn’t know any of them. That seemed very strange to him.
As they approached, they made no sign they’d seen him. The boy put it down to his lame costume. The group walked up and stopped right next to the gate.
The tallest of them pushed the smallest boy forward and one of them said, “Go on. Go up and knock on the door. See if you get some good treats.”
The little one struggled against the others, terror-filled his face.
“No, no, not the murder house, not the murder house. I don’t want to end up the same way as Dylan did,” he screamed. He managed to push backwards, slipped between the other boys’ hands and bolted up the street.
They watched him go and the tallest boy shouted, “Chicken.”
All of the remaining boys laughed for a few moments before moving away.
The boy watched them go while munching on his chocolate bar and thought about what the little boy had said.
Dylan? he thought. I’m Dylan. I don’t know any other Dylans.
He finished the chocolate then turned around to look at the house.
Everything had changed.
Now, the grass was long and dry, the trees overgrown and unkempt. The path made up of cracked pavers with dry grass springing up between them. The front door was a smashed mess of damaged wood. Every single window had boards up over broken panes.
Memories flooded Dylan’s mind like he was watching his life play out on video.
The evening was bright. He walked down Elm Street with a bucket full of candy, happy with his haul, happy with himself. He stopped outside number 1428. It was the last house before Palm Street and the last house he was allowed to trick or treat.
He grasped and opened the gate then walked up the pristine paved path. He reached the front door and rang the doorbell.
A kindly old man opened it, spoke softly to him and invited him in. His dream self failed to see the eager grin on the old man’s face and the way he peered around to check that no one was watching.
The door slammed shut.
Dylan’s ghost stood outside. The screams started inside.
He dropped his bucket of candy to the broken path and looked down at his hands. All he could see was the path below.
He realised his costume wasn’t a ghost.
He was.
He began to cry.

Stephen Herczeg is an IT Geek, writer, actor, film maker and Taekwondo Black Belt based in Canberra Australia. He has been writing for over twenty years and has completed a couple of dodgy novels, sixteen feature length screenplays and dozens of short stories and scripts. Stephen’s scripts, TITAN, Dark are the Woods, Control and Death Spores have found success in international screenwriting competitions with a win, two runner-up and two top ten finishes. Stephen has had over seventy short stories and eighty drabbles accepted for publication. His speculative fiction work has featured in numerous anthologies from Hunter Anthologies; the Australasian Horror Writers Association; Oscillate Wildly Press; Things In the Well; Dead Set Press; Dragon Soul Press; Fantasia Divinity; Monnath Books; Battle Goddess Productions; The Great Void Books; Blood Song Books; Black Hare Press; Raven and Drake; and Black Ink Fiction. Over a dozen of his Sherlock Holmes and Solar Pons stories have been published through MX Publishing and Belanger Books. He is incredibly proud that his first collection of Sherlock Holmes stories, The Curious Cases of Sherlock Holmes, will be published later this year by MX Publishing. He lives by the creed, Just Finish It, and his Mum is his biggest fan.