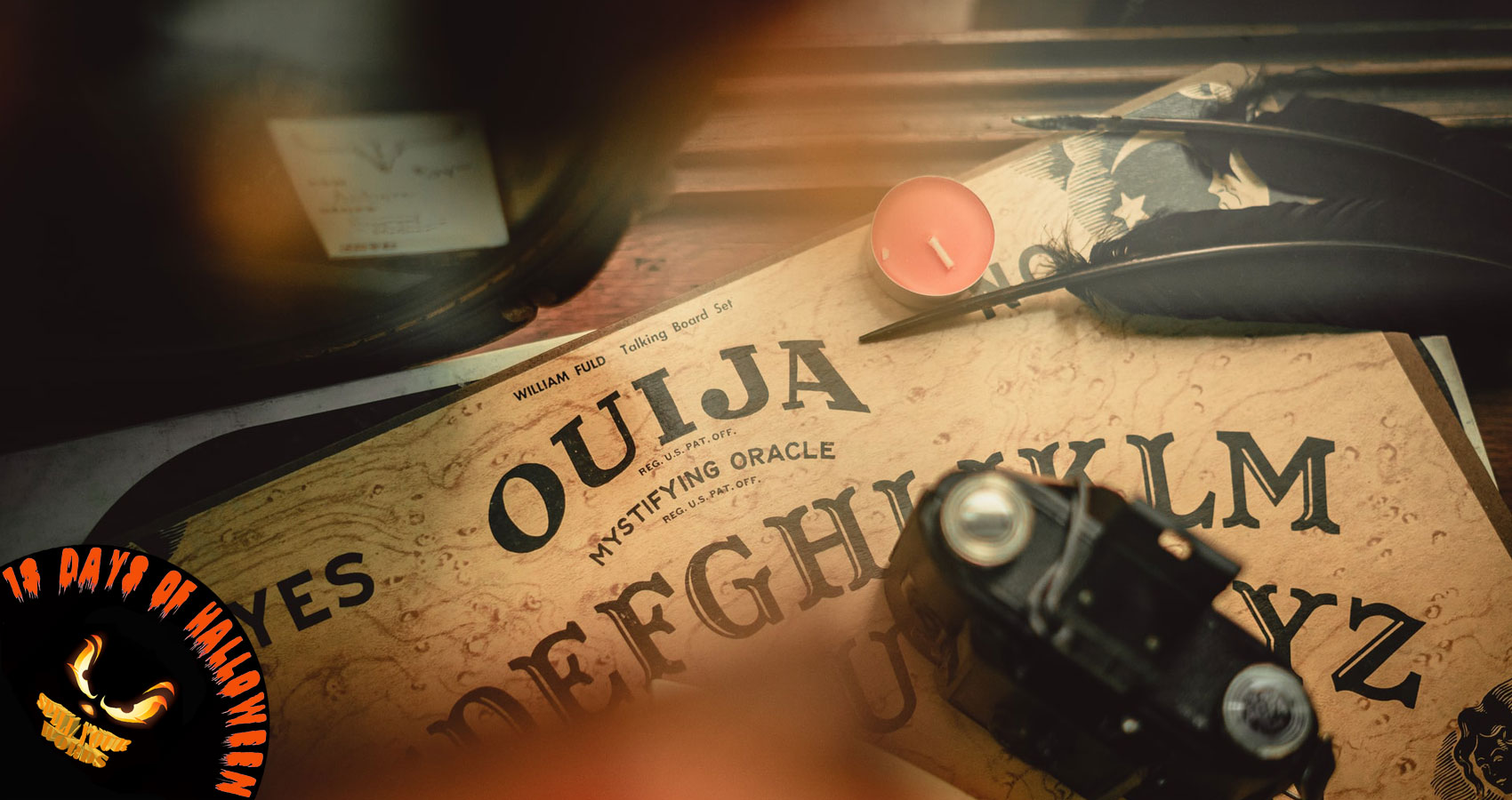 Someone killed the lights, and a roomful of Halloween costumes disappeared. People whispered and laughed as they crowded around the dining table, lit by a single black candle. The party food had been cleared, and the surface was bare except for an object wrapped in dark velvet.

Madame Ziphora looked around the room, her face grave. ‘We shall now begin. Everyone join hands.’ There was the rustle of clothing and the chink of someone’s bangles as the group formed a large circle.

Simone looked at Jack, who winked and squeezed her hand. He looked the part in his Jack Skellington outfit, and she in her matching Sally costume, and it made her smile. Jack was such a joker, always roping her into the weird and wonderful. It was surprising given the accident, and perhaps she should be worried. Often the people who appeared the happiest were the most haunted.

Madame Ziphora unwrapped the velvet cloth and placed an Ouija board on the table. ‘Close your eyes and concentrate. Open your mind to the spirit world, but do not break the circle.’ She cleared her throat. ‘Spirits, we summon you, seeking answers from the other side! Please heed our call!’

The candle made a sputtering noise, setting off a series of gasps. Simone stifled a laugh until smoke filled her nostrils. Her eyes snapped open to a pitch-black room.

‘Our call has been answered,’ said Madame Ziphora, striking a match and relighting the wick. The orange flame reflected off nervous eyes. The medium placed her hands on a small wooden disc. ‘Spirits, do you have a message?’ The disc slowly edged across the Ouija board.

She flinched and looked around. Everyone in the circle was staring at her.

‘Spirits, what is your message for Simone?’ asked Madame Ziphora.

‘Mary,’ someone said. ‘Is that Bloody Mary?’

Simone blinked, her cheeks beginning to burn. Jack let go of her hand, and the overhead light came on. He dropped to one knee and opened a pumpkin-shaped ring box. Sounds of delight ran around the living room as a large diamond ring danced under the light.

Her heart hammered inside her chest. ‘A marriage proposal?’ she said in a shaky voice, ‘During a Halloween séance?’

‘Well,’ Jack said, ‘you are the editor of a wedding magazine. I had to do something outrageous. The lovely Madame Ziphora, or should I say, Zoe, was more than happy to help.’

The group laughed, but Simone didn’t join in. Jack took her hand and slipped the ring onto her finger. The sight of the princess cut diamond made her insides twist. It was all too soon. They’d only been dating for a year, and she knew he still had nightmares about Megan.

A loud crack came from above, and the light fixture exploded, showering the table with glass. One girl shrieked, and a strong gust of wind blew out the candle. ‘Ah, guys,’ Zoe pointed to the Ouija board, ‘I’m not doing this!’

The disc was darting back and forth on its own. Everyone leaned forward.

Simone shivered. ‘Why should I say no?’ Again, the disc flew around the board.

‘What?’ she cried. Jack’s body had gone rigid.

‘This is getting dangerous,’ said Zoe. ‘I think we should stop.’

Zoe reached for the board, but she was lifted into the air and thrown against the wall. Two girls screamed and ran out of the room. ‘We need to burn white sage,’ Zoe gasped, clutching her chest. ‘My bag,’ she said, ‘someone get my bag.’

The disc stopped and started a new word.

Jack tried to grab the disc, but a nearby mirror exploded, spraying them with fragments. A piece nicked Simone on the cheek, and she recoiled from the sting. ‘Let’s get out of here,’ Jack said, grabbing her by the arm and moving towards the door.

He fumbled with the doorknob, ‘It won’t open. Help! The door’s stuck!’

Simone turned towards the living room windows. The carved pumpkins decorating the window sills floated into the air and began to take aim. They ducked before one smashed into the door, splattering it with orange goo.

She slowly turned around and approached the table. ‘Spirit. Who are you?’

Jack lunged forward, bringing his hand under the board and flipping it into the air. It clattered onto the floor, the wrong side up. The disc disappeared underneath the chairs.

Something cold slithered down her back. She looked at Jack and his pale face and bloodless lips. ‘I thought Megan died in a boating accident?’ she whispered.

A slow scratching noise started up, worse than fingers on a chalkboard. The disk was back on the table, cutting jagged letters directly into the wooden surface with saw-tooth movements.

Simone gasped and backed away. She slipped the circle of metal off her finger and let it drop to the floor. The door behind her creaked open.

Esme is a metallurgist and writer of speculative and contemporary fiction. She was selected to participate in the 2019 KSP 1st Edition Retreat, the 2020 Four Centres Emerging Writers Program, a 2020 KSP Fellowship and the 2021 ASA Award Mentorship Program for Writers and Illustrators. Her work has appeared in the Underground Writers Zine and on Spillwords. When she is not reading and writing, she looks after her two children and garden in Perth, Western Australia.