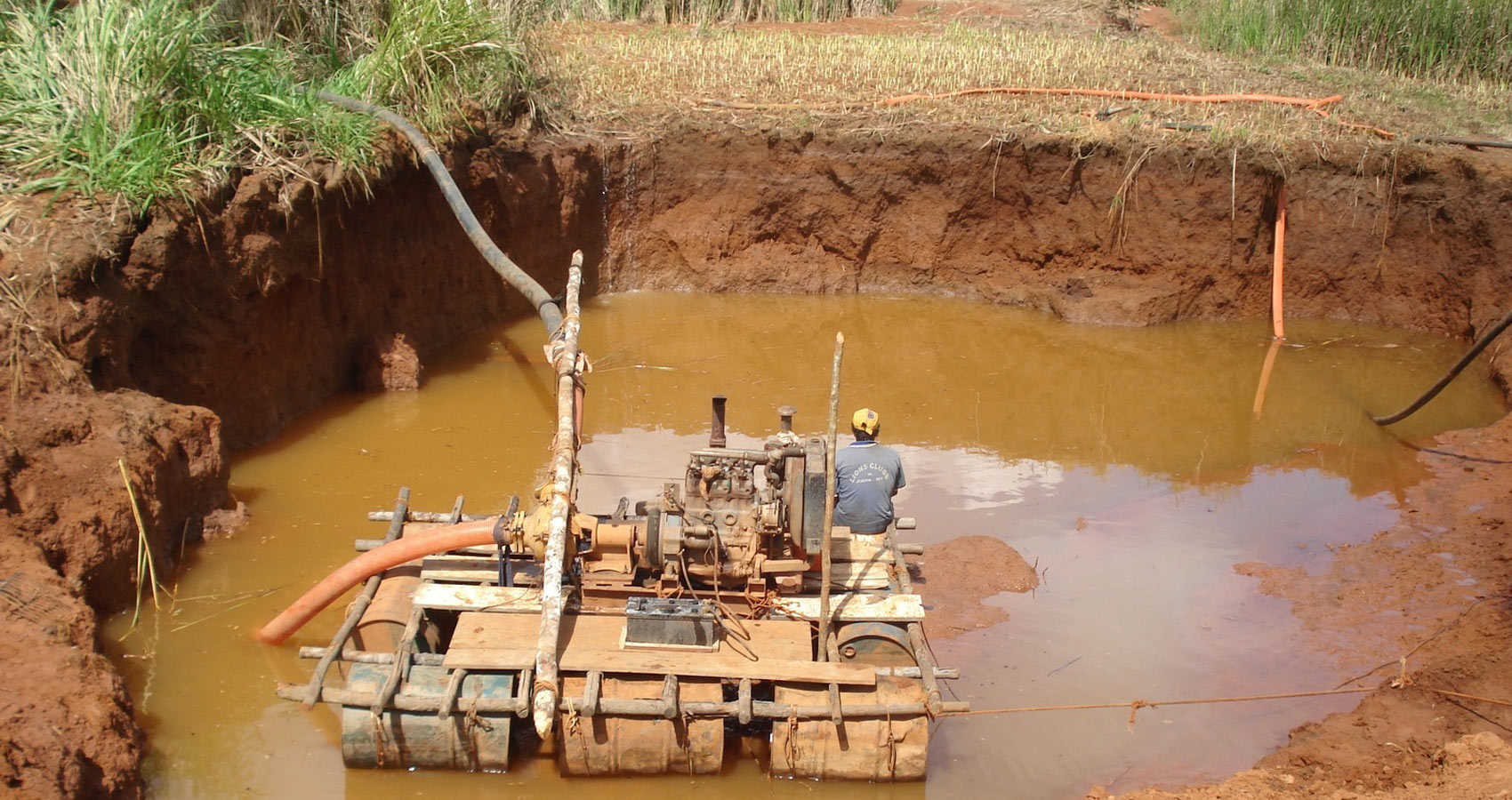 The Dig Down Boys

The Dig Down Boys

“Tomorrow you of age to be on the path to being a boss, brother,” Ibrahim said.
Sandima nodded thoughtfully. The heat from the campfire was almost too much. The flames on the logs were intense, reaching high into the air. Specks of fiery red ash were spat upward into the night sky. He took a large drink from the packet he grasped tightly in one hand. The alcohol in the liquid delivered an immediate punch. He rocked backward on the log. “I not become a boss,” he said.
“Waaatttt!” Ibrahim and Hassana said in unison with equal surprise from the log they sat on. The fire separated them from their friend.
“You have enough money saved to do something else, brother?” Hassana said. Sandima was a blurry figure almost lost among the dancing shadows cast by the campfire. His eyesight was getting worse. One day he hoped he would be able to buy a pair of glasses. One day.
It was then that the cry of a panther echoed from the jungle beyond the ring of nine huts that made up the encampment. All three boys turned and looked the direction of the panther’s cry. Several bosses ran out of their huts, waited for a moment, and not hearing anything more, went back inside. Other Dig Down Boys playing cards while crouching on a piece of cardboard not far away the campfire were momentarily silent and then broke into nervous laughter.
Sandima took another drink from his packet. The world was spinning. Happily. “I no need lots of money. I have lucky pan, remember, brothers?” he said.
“Sorry to say this after all this time seeing you with that pan, but a pan is just a pan,” Ibrahim said. “Better to have plenty of money in your pockets like a boss. That is what luck is.”
Sandima stood and waited for the ground beneath his feet to stop moving. “Wait and see. I will buy myself, and you my brothers, everything we have ever wanted and take us wherever we choose to go.”
“You drunk,” Hassana said. He and Ibrahim broke out into loud laughter.
Sandima walked away. His head was pounding, both from the inside and out. Why were some birds and the monkeys so loud at night? He started on the trail leading to where they had been digging for diamonds. He wanted to dip his body in the water. He needed time to think and in the coolness of the water was an ideal place to do that. He would be strip-searched by a boss and a Dig Down Boy, acting as guards, before going into and coming out of the water, but he didn’t care. Packet alcohol did more than make the smile on his face feel permanent, it also acted as an anesthetic. Earlier it had made it possible to swallow the diamond, unseen, while sitting only a few feet from the others. At the water he removed his clothes as he was ordered to do by the boss standing guard.
“Why you take a bath so late at night, boy?” the boss said.
“To keep the panther from seeing me naked as a bushbuck, Boss,” Sandima said. “I no want to be lure the panther with my flesh.”
“Panther see you day or night,” the boss said. “They see things we don’t.”
Still feeling the effects of the alcohol, Sandima staggered into the water, lowered his body until he was immersed up to his chest, and remained perfectly still. He hadn’t given much thought to how it would feel having a diamond in his belly. As his stomach began to churn, it dawned on him that passing the jewel through the rest of his body and out of his anus could possibly be complicated. And painful.

Sandima rose from the straw mat on which he slept. The diamond had moved from his stomach to his intestines. Doubled-over with pain, he walked to the door of his hut and looked out. Moonlight shone through the canopies atop the kapok trees that surrounded the encampment. Hazy smoke drifted from the extinguished campfire into the air, and then carried off by a balmy breeze. Behind him, on their mats, Ibrahim and Hassana slept soundly. His pan, and theirs, were hung on the walls of the hut. In the ambient light they looked like tribal masks, other-worldly and frightening. He left the hut in search of water to drink. He thought, Maybe water would wash the diamond further down. Near Boss Ousman’s hut he found several jugs of water. He removed the cork from a jug and began to drink from it.
Boss Ousman came running out of the hut, a rifle in his hands. Seeing Sandima, he said, “Boy, I thought you were a wild animal.”
Fighting the cramping in his bowels, Sandima straightened up. “Sorry, Boss, but I had a terrible thirst.”
Boss Ousman walked over to Sandima and placed his hand on his shoulder. “I will give you your birthday present early,” he said. “At daylight you begin training as a boss.”
Sandima broke out into a sweat. “Thank you, Boss,” he said between clenched teeth as he bent over. The pain in his gut went straight to his head.
“Are you okay, boy?” Boss Ousman said. “You look sick.”
“I’m fine,” Sandima said, and then he passed out.

Two days later Sandima woke up in a strange hut. The lower half of his naked body was covered with a piece of cloth. His lips were parched and his throat was as dry as withered fruit. His anus ached. He started to scratch his nose and realized his hands had been placed on his chest and were bound together by hemp. He looked down and saw that his ankles had also been tied together. His thoughts immediately went to the diamond he had ingested. No one should swallow a diamond that jagged and size. There was no doubt that it had come out. He then thought about death. How had he escaped it? From the diamond? From being found out stealing from the company? From stealing from Boss Ousman?
From outside the hut came the sounds of shouting, rifle shots, and running footsteps. The word “panther” was repeated loudly and clearly.
Sandima sat up. Dizziness blurred his sight for a moment, and then his vision cleared. There he saw in front of him, leaning against a wall, his pan. He sighed with relief. It was like finding an old friend who he feared he would never see again. It had lost its luckiness. But it was still a friend.
The door to the hut opened and Boss Ousman walked in, his hand gripping the thin, bare shoulder of a a small boy, leading him in. The boy was trembling, his eyes wide open, an expression of abject fear on his face. “So, Sandima you are awake from the fever already. Swallowing a dirty diamond that cut up your insides was not a wise decision.”
Sandima cleared his throat and ran his tongue over his lips, trying to bring moisture to them that didn’t exist. “Why am I not dead, Boss Ousman?”
“When you shit out that diamond I think I strangle you with my own hands, but you have been a good and faithful Dig Down Boy all these years, so I keep you alive. For Now. But you will not be a boss and you have forfeited everything you have earned until now. I will not mention your attempted theft to the company.”
The boy struggled to free himself from the pain of the boss’ grip.
Boss Ousman tightened his grip on the boy even more. “This is Amadu who was to be yours, just as you have been mine, but now I must give him to someone else to serve and be trained by.” He then shoved the boy onto the ground next to where Sandima lay. “Amadu has much fear, but potential as a Dig Down Boy.”
Sandima exchanged glances with Amadu. Tears had welled up in the little boy’s eyes.
“From you he can still learn,” Boss Ousman said. “That stealing could cost him his life.” Laughing sardonically, he turned and left the hut.
Sandima then asked Amadu the first question asked any new boy to be groomed as a Dig Down Boy. “Where do you come from?”
“Freetown,” Amadu said.
“That is a far distance,” Sandima said.
“Not so far,” Amadu sniffled. “They drove and walked in circles before bringing me here to confuse me, but Amadu not easily confused.”
“Tell me more,” Sandima said.
It was nightfall by the time that Amadu and Sandima shared their stories. Both were from Freetown and both had been kidnapped while walking home. Amadu – like Sandima when he had been kidnapped – was seven years old.
“I prefer to die,” Amadu said when Sandima finished telling of his life as a Dig Down Boy.
It was quiet and still outside the hut when Ibrahim and Hassana entered, signaling to Sandima to speak in whispers.
“What is your boss going to do to you, brother?” Ibrahim asked as he and Hassana knelt down beside him.
“He keep my savings. I back to day one as a Dig Down Boy.” He glanced over at Amadu and then back at them. “This boy maybe know the way back to Freetown. It is too late for me to rejoin my family but he will need my help to get back to his.”
“How would you do that, brother?” Hassana said.
“In doing what I ask, you too may lose your savings, if what you do is discovered ” Sandima said.
“I can wait a while longer for eyeglasses,” Hassana said. “Tell us.”
“First, untie me,” Sandima said.

In the middle of the night, as the rays of a waning moon shone through the spaces in the hut’s hay and bamboo roof, the shouts of “panther” erupted from the opposite side of the encampment where Ibrahim and Hassana had hidden themselves in the bushes to be kept from being seen as the ones shouting. As bosses ran from their huts in haste and confusion, carrying their rifles, Sandima grabbed Amadu’s hand, and his only possession, the pan, and ran from the hut and across the encampment, leading the boy into the jungle. They ran until Sandima thought they were a safe distance from the encampment. As they stopped to catch their breath, the guttural growl of the panther came from the nearby bushes. Just as it leapt out, Sandima raised his pan into the air, and with a single arch-like splice he severed the panther’s head from its body with the edge of the pan.
“Still a lucky pan,” Sandima said, grabbing the boy’s hand again and running the direction of Freetown.