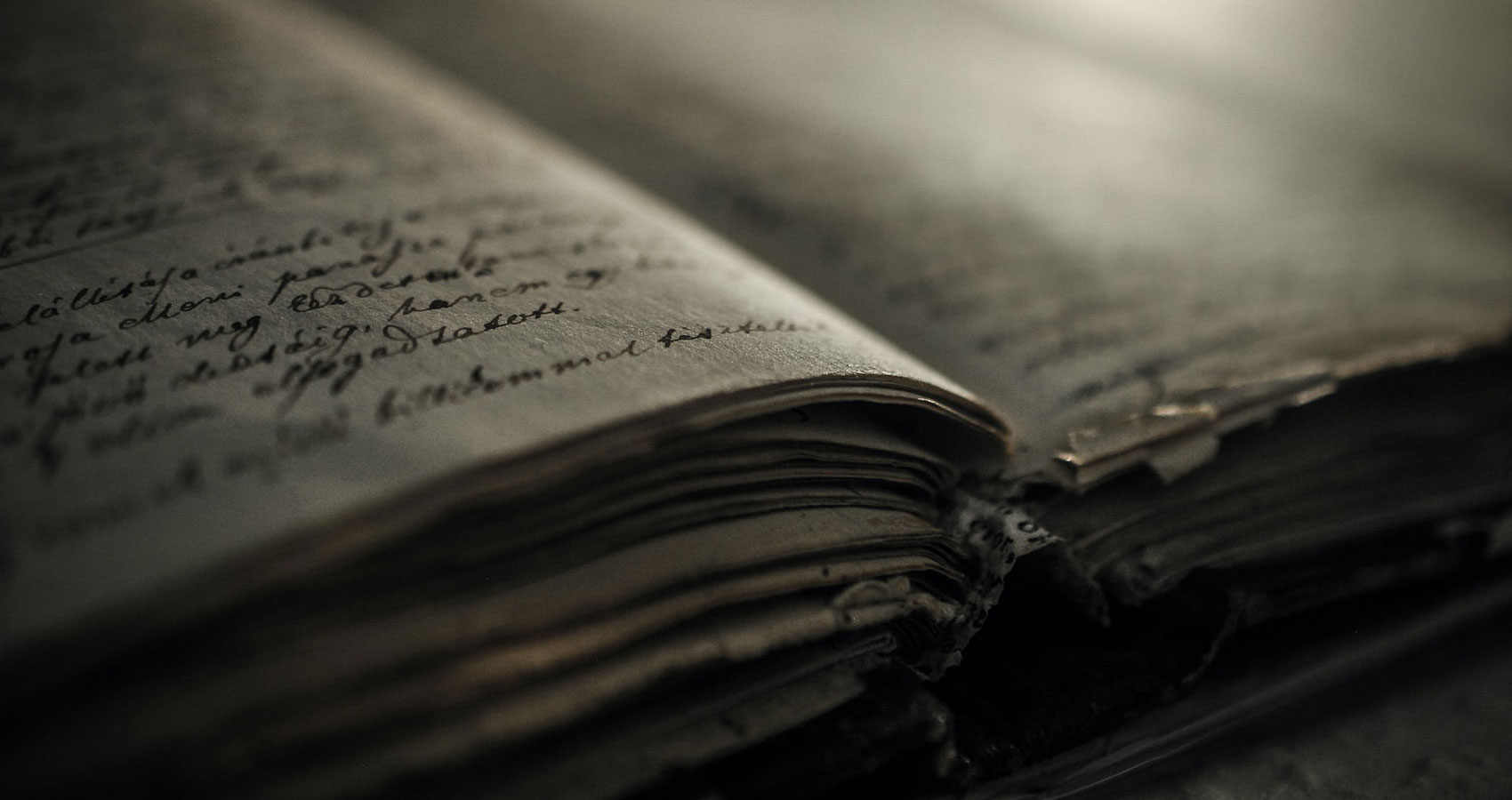 written by: Away With Words

CHAPTER I – A Simple Book

On these pages: a story writ.
Not lines of love, near opposite.
With wicked words, bursting seams.
and pictures ripped from horror scenes.

This transcript: tallied tragedy
seemed clear, at first, of trickery
such that I said, with full belief:

“I simply bought a book,

Nary a choice did I resent
more than my steps up staircase bent.

Had I known what fate was in store,
I would’ve stopped short of the door
and listened to my heart’s retort
turn my back to oaken boards;
neglect to knock, proceed no more.

Alas, the wiser choice did seem
like foreign words I could not read
a weaker foe to curiosity.
Thus on the door, my knocks numbered three.

A lock’s release, my wait was for;
an unlatched, oaken, ornate door.
As portal opened to the store,
of echoed feet, I thought no more.

Creaking hinges, a’rust with age
made way for shopkeep’s leathered face.
His cobwebbed volumes filled the space
and gave the air a smell and taste.

My steps were s l o w; I didn’t know
what book, which nook, my search was for.
So I walked the aisles, for a while:

‘Till a hidden book stood out

A hidden nook stood out

A hidden book’s nook stood out.

Into that nook, up to that book
my outstretched arms raised hands that shook

But now I see that I was blind
to evil glints in shop-keep’s eye,
and how my steps had crossed the line,
but like a fool who pays no mind,
I gripped book’s spine, as chill gripped mine.

Alas, Where once I felt so free
this “simple” book imprisoned me!
Looking back, it’s plain to see:
Text locked the door, and tossed the keys.

On portal’s edge, I sat a spell,
For front my eyes, world turned to Hell.
Clocktower bells rang out death knells,
Mixed metaphor with sulphured smells.

A lock released, an op’ning door;
Followed by sounds I can’t ignore
As I walked home amid the storm,
of echoed feet, I thought once more.

What harkened there, shadowed so?
It made no noise; I didn’t know.
and so my steps fell soft as snow,
heard silence then, and nothing more.

Was it the shopkeep, hidden there?
In darkness deep, ‘thought saw his glare
and so I turned, searching, scared.

Nought, I saw in darkness there

“I face you now, as friend or foe!
Why you hide yours, I do not know.”

So still, the shadow stayed his frame..
as if playing a hidden game.
His outline froze, stuck; seeming strange,
Besot, I sought the shadow’s name!
but to my ears came only rain.

Alas, light passed, lit up the space
where I expected a strange face,
but to my shock, the revealed place
held only water, reflecting face

On puddle’s edge, I searched the grass,
still found just water, still as glass
Just as I thought, “This fog won’t pass,”
my clouded mind came clear at last.

A calming breeze cleared my mind’s haze.
To self, I said, “If blindly brave…
I’d sell tomorrow to yesterday;
risk retrospect of future fate.”

Thus, I thought a tale would end,
The book, or life, I can’t portend.
Post-curse, I’m worse for wear, my friend!
Now words alone don’t serve to mend.

I turned a page into the book,
and as before, my hands, they shook,
The leaves were blank! Was I mistook?

No words were writ, the pages, bare.

No words to see, then one appeared!

A balked belief, before my eyes:
that ghost-writ word was leading lines!
and so I read, still scanning script
‘scarce skipping stanzas, none I missed.
I turned more pages, teeth a’grit…
Falt’ring, failing to feel my fits;
I couldn’t stop; cease reading it

Alas, time passed, still keeping speed
words filled white pages, enrapt I read
How does this work? What’s this all mean?
Why was the cursive cursing me?

On pages’ end, the words did seem
a lifetime writ, for all to read
Right from the start, text taunted me
divined a doom, a destiny

Its pox perceived, print paper flat.
I begged the book to take it back
“Who’s words were those? Who’s fate is that?
Who’s life and death, in white and black?”

Daunted, I delved so desperately
for I felt my future had past, you see
Living my life so longingly
feared my fate’s folly, unfortunately.

As I read, the book, I took
my final form, ‘spite balance shook;
lapsed living lies; won’t die a crook.

I blinked, unlinked, to weaker chain

I shrinked, to think, of lesser gains

I winked, on brinks, but not insane

So now, my friend, I’ll pen some prose;
dream up new lines; make up new words:

Where once I thought that what was writ:
the rise and fall, all of it
could not be altered, not one bit;
as if in stone, the letters sit;
lines laying law, commanding it!

But now I face what fate comes forth;
leave letters forming words with worth.
My written rhymes give gallant girth;
they sing a ballad; but say one verse:

I put down past, but faced it first
in breaking down, I found what works
I fixed my fate, and shed the curse,
Better for me but, for you, much worse!

The book, this poem share a name.
Perchance that fact would make it plain
When written words hide horrid hex
You cannot flee, for you are next!

Ever since penning his first poem at the age of 8, Allen has known he wanted to be a writer. Whether it gave him inspiration or indigestion, he has found a way to say it in words. He currently posts on Facebook. You can find his newest creations on Mirakee.

Latest posts by Away with Words (see all)