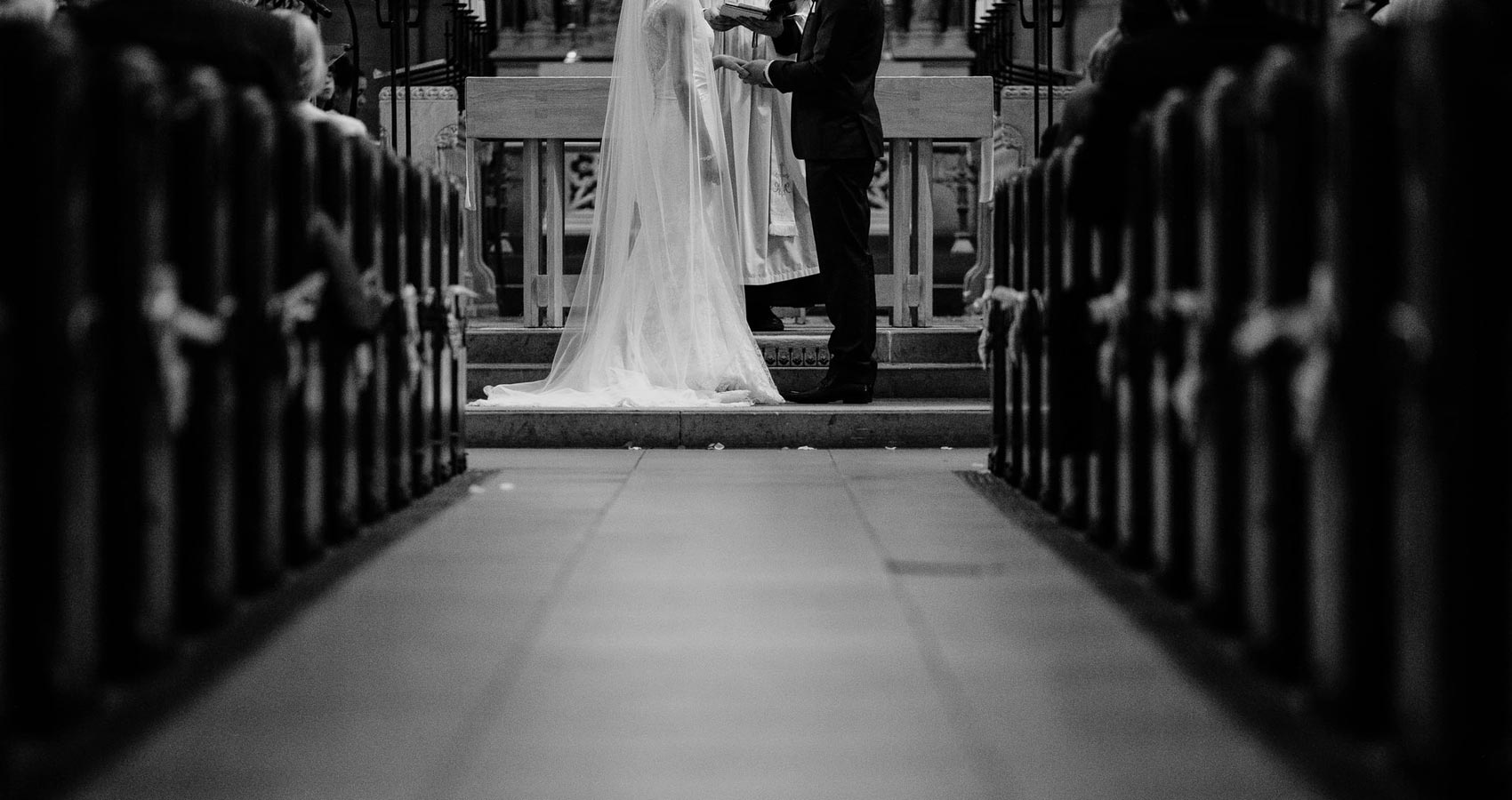 Imelda loved the atmosphere of a wedding, especially the fashion, with everyone making an effort to get spruced up and look magnificent. Men seemed to be stuck with suits, but ladies could be as extravagant as they dared, and a wedding was one of those rare occasions when hats could be worn without the wearers becoming too self-conscious. Imelda’s was a yellow pillbox number while her friend Penny sported a crimson fedora with an enormous spider brooch pinned to the left-hand side. The whole event was perfect, a beautifully turned-out congregation, in a delightful old village church on a wonderful summer’s day.

‘Perfect, perfect, perfect’, thought Imelda, except for the groom standing near the altar waiting for his new bride to arrive. He was facing away from the pews, straight ahead towards the glowing stained-glass of the Resurrection. As well he might.
Charlie MacIntosh was the human resources director of a large retail company, successful in his career, fun-loving, a wine buff and general all-round good egg, and very, very handsome to boot. He was, as the kids these days say, ‘fit’. There he stood, on this very important, very special day, waiting for his gorgeous wife-to-be.

‘She’s the luckiest woman in the world, Penny’, Imelda mused in a low voice. ‘The only trouble is, dammit, she’s not me.’
Penny looked at her friend, grimaced a little and whispered back:
‘Oh Immy, you are a one. Anyone would think you have the hots for old Charlie.’
Imelda let out a tiny chuckle, trying to give the impression that she was only joking.

Charlie and Imelda had shared an apartment for a couple of years in a purely platonic, best-mates kind of arrangement. They lived their own lives, but often spent evenings together in the flat watching television, listening to music, and occasionally wine tasting and chatting about everything and anything. Imelda had introduced Charlie to a couple of boyfriends, although she was now free and single, and Charlie had done the same with his girlfriends. But his latest squeeze, Helen, seemed to be a bit more special than the others. He was enchanted by her, and when she came round for dinner for the first time, Imelda could feel the intensity of their relationship just from their body language and eye movements. This relationship was serious.

Imelda had never let on to Charlie that she was falling in love with him. She feared rejection and didn’t want to risk upsetting their apartment arrangements; she certainly didn’t want to ruin a great friendship. In any case, it was Charlie who rocked the boat, the night before the wedding. In the tradition of the husband and wife-to-be spending their last pre-wedding night apart, Charlie had opted to stay at the flat. Imelda cooked a spaghetti Bolognese and uncorked the first of a few bottles of Chianti. It was a nice evening. They talked and laughed for hours, and Charlie seemed relaxed. Imelda kept trying to resist any amorous feelings or any drunken slips of the tongue that might ruin the night.

But when Charlie said: ‘Immy, I have something to tell you, something I need to get off my chest.’
Imelda raised her eyebrows and wondered what was coming next.
Charlie said, ‘I need to whisper it in your ear.’
Imelda laughed: ‘You’re a right Charlie, Charlie! There’s no one else here but us chickens.’

Charlie moved over and sat down next to Imelda on the sofa.

‘I know that, but I need to whisper it because it’s a secret and I can’t say it out loud.’

Imelda waited for Charlie to declare his undying love for her at last, and then kiss her for hours.

‘Imelda,’ breathed Charlie, ‘Helen, my soon-to-be-wife, has been having an affair.’

Imelda recoiled and her head hit the wooden corner of the sofa.

‘Ouch! What? Are you mad? Do you know what you are saying? How do you know she’s been having an affair?’

‘Crikey,’ inhaled Charlie, ‘so many questions! But the real question is, should I go ahead and marry her?’

Back in the church on this nearly perfect day, Imelda’s eyes locked like laser beams onto the back of Charlie’s head. After his whispered confession, they had talked about it for a while before Charlie declared that he had forgiven Helen and that his love for her far outweighed any feelings of betrayal. The wedding would go ahead as planned. The new future which beckoned erased any past indiscretion. Over coffee the next morning, they had clinked mugs as Imelda wished Charlie good luck for the ceremony.

The organ signaled Helen’s arrival at the church, and Imelda thought that for a cheating, two-timing bitch, she looked stunning in every way. She was indeed the luckiest woman in the world. As Charlie waited for her to walk up the aisle, he continued to stare at the Resurrection window, maybe thinking that he had risen above a potential disaster.

The service washed over Imelda’s distracted mind, the words drowned out by the wrestling between her conscience and her desire. She was trying to be rational; trying to not feel spurned. Yes, she was jealous, but her next actions would require a cool head and a huge dose of courage. The minister addressed the congregation:

‘If any person here present knows of any lawful impediment to this marriage, they should declare it now.’

As usual, at this point, heads swivelled as people glanced about looking for any takers, but all seemed to be well – except for a movement from a lady in a yellow pillbox hat. Imelda stood up, prompting expectant gasps from the congregation. Charlie, aware of something going on, looked around and saw Imelda standing nervously halfway down the church.

‘No!’ he mouthed at her, but Imelda took a deep breath and started to speak.