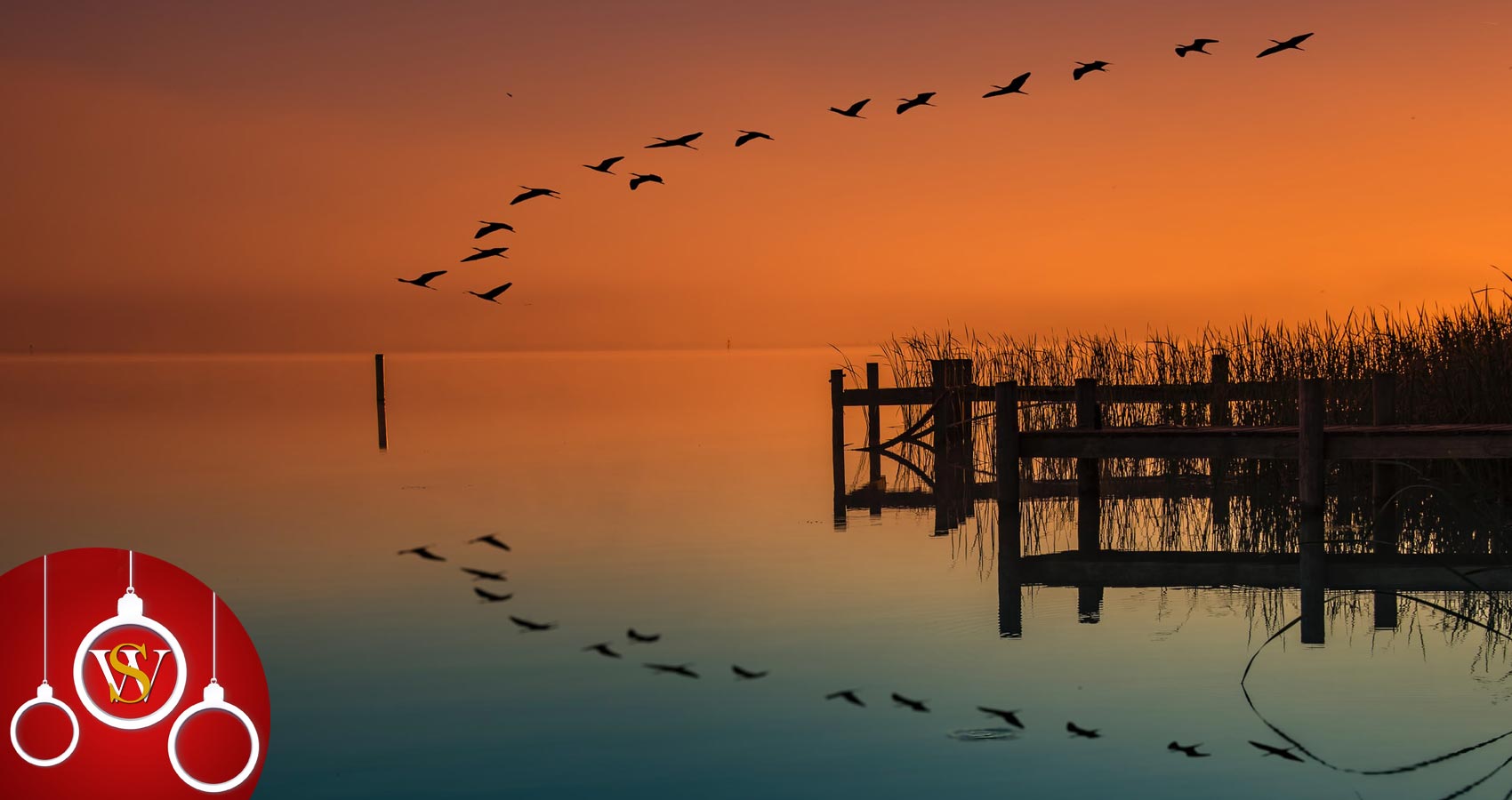 Tired of City life, wealthy Ben purchased an entire block of flats in the riverside village he’d grown up in, to protect himself from annoying neighbours. He loved the emptiness of the sky, the silver ribbon of the river and its muddy banks which stretched out to the horizon. Standing on his balcony, he watched the clouds of circling gulls and listened to the haunting cries of the curlews, and knew he’d finally found peace and quiet.
He lived a few rooms on the top floor, with balcony and views; the middle floor stood empty, just how he liked it; and his office took a room on the bottom floor where the blackened glass enabled him to see out, but no one could look in. His pride and joy was the wooden jetty stepping out into the river, which he kept gated and bolted, unlike previous owners who had allowed open access to the villagers.
Ben worked alone, which was how he liked it, and did all his business over the Internet, so he never had to meet anyone. Everything he needed was delivered direct to his door. He’d wander out along his jetty, and watch the river sweeping in or out, smell the salt air and listen to the harsh cries of the gulls.

So no one was more surprised than Ben, when, on Christmas Eve, his office door creaked open.
‘Hi Uncle Ben!’
His annoyingly cheerful nephew stood before him.
‘Fred. I’m busy. What is it?’
Fred beamed, his cheeks glowing red because of the cold. ‘I’m inviting you, as ever, to come and spend Christmas with us.’
‘Pah – Christmas! I don’t do Christmas.’
‘Well I do – and in memory of my poor dear mum, I’d like to know you’re not alone.’
‘Alone but not lonely. Close the door behind on your way out.’
‘Uncle – if you change your-’
‘Goodbye!’

Later, upstairs in his flat, Ben stared at the river, his microwave meal propped on his knee, and his laptop showing the financial index. It buzzed, and a message appeared showing him someone was trying to make a FaceTime call. ‘Decline’ – he tapped, with an angry finger. The computer buzzed on, regardless, and the face of Jacob, his long-dead business partner, swam into focus.
‘Is this some kind of prank?’ snapped Ben.
‘Unfortunately not,’ drawled Jacob’s disembodied face, in that irritating tone he’d had.
‘You’re not real,’ said Ben. ‘You’re a figment of my imagination.’
‘No matter what you think. Listen without interrupting.’
Shocked at being told what to do, Ben remained quiet.
‘Three spirits will visit you tonight, and you’d better do what they say, and change your ways for the better, or you’ll be in deep trouble.’
‘Rubbish!’ said Ben, and slammed down the lid.

Unsettled and uncomfortable, he took himself to bed, planning to make the next day – Christmas Day – a day of rest after all, as he’d clearly been working too hard. He drifted off to sleep quickly and woke suddenly to find his room filled with a strange blue light. He thought he spotted Jacob in the corner of the room, but when Ben turned to him, he wasn’t there.

Ben’s mobile phone, lying face up on his bedside table, was flashing Facebook memory notifications at him, yet he hadn’t used his account for years. He scrolled through the photos labelled ‘On this day.’ Christmas pasts: Ben at the Fezziwig’s Christmas party (his old boss had been such a friendly chap); Ben posing with Alice in front of their first Christmas tree (he had been fond of her, what a shame she had let him down); and Ben’s wonderful sister, Fred’s Mum, with a round, fertile belly. Poor thing, she’d died giving birth to Fred, and Ben squirmed as he remembered his broken promise to help bring up the lad. Wiping away a treacherous tear, he lay down to sleep once more.

No sooner had he closed his eyes, than his phone bleeped. Ben distinctly remembered switching the sound off. Enraged, he snatched it up, but a video clip from Fred began to play and he found himself watching. Surely it wasn’t Christmas Day already? But the clip showed Fred, family and friends playing party games and laughing and joking. Ben felt lonely and a little sad and began to wish he’d gone after all. One day away wouldn’t have hurt.

But there was no time to think – his phone was playing more videos now. The first was of a flat for sale – an exclusive riverside penthouse suite – Ben’s flat!
‘But I’m not moving!’ He wailed and an echoing wail answered from outside. ‘Curse you, Jacob!’ shouted Ben, but a different video was playing now. This one pictured a cemetery, and it zoomed in close on one particular gravestone, covered in ivy and moss, and a thin gnarled hand reached and pulled them away like curtains, to reveal the writing. Ben tried to stop it, and he tried not to look, but he couldn’t help it. The inscription read ‘Ben Scrooge,’ and Ben grabbed his phone and ran sobbing onto his balcony, ready to throw the phone into the river.

A weak and watery winter sun was rising downriver, skipping across the tips of the wavelets of the incoming tide. Delighted to find himself still alive, Ben looked once more at the phone in his hand. Off. He switched it on and used it to phone Fred to discuss some ideas he’d just had.

Later that day, a happy crowd of villagers attended an outdoor party on Ben’s unlocked jetty. Pretty lights winked in the darkness, outdoor heaters and endless hot food warmed everyone. Ben’s annual Christmas parties, and his generosity, became well-known in the village!

Helen Chambers is a short story and flash fiction writer from Wivenhoe, North East Essex, UK, who dreams up ideas walking by the river. Much of her work is influenced by the natural world. She has an MA in Creative Writing from the University of Essex and she won the Fish Short Story prize in 2018. Helen has publications at Citron Review, Spelk, Meniscus, Potato Soup Journal and Fictive Dream amongst others, and is a LISP Highly Recommended Writer. She has been a reader for the Brighton Short Story Prize. You can read about these and several other publications on her blog: Helen Chambers – Writer.