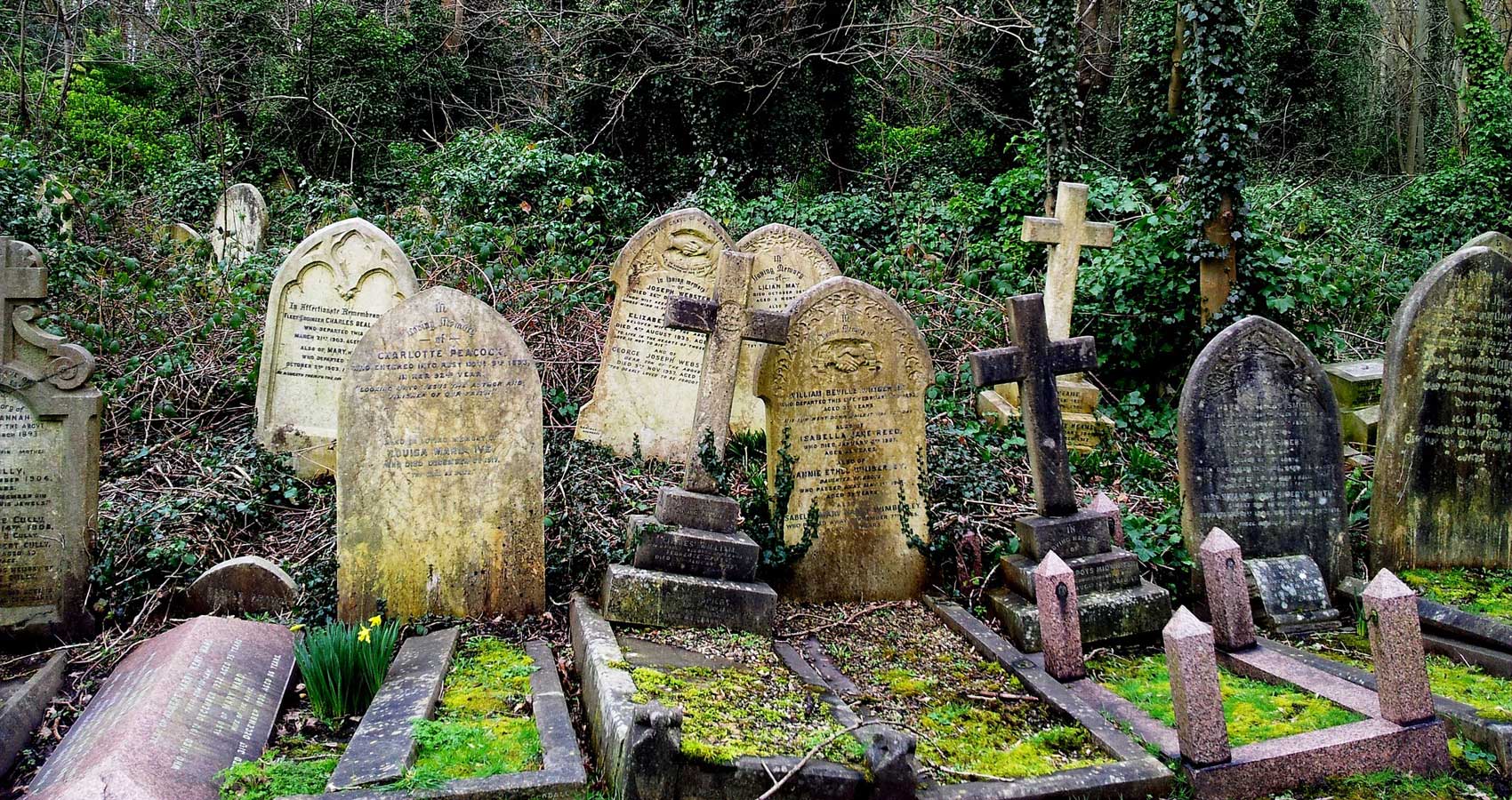 December air, smudged with cold and clouds, lies heavily on the street, weighing loss with leaded weights at our lives and their thin scurry between work and night. An orchestra might sing weather like this as a descending, single note drawn out long from a saxophone or hide it amongst a fluster of pigeons. Highgate cemetery is in business with theatres of death like this, its wrought iron railings and fester of ivy a risen curtain hoisted with grief’s strings.

Once, August was loose here and teenagers would push between the fence gaps, heady with sun and searching, they’d wander the shaded greenness, murmuring, drinking and then tasting silence’s stuff at reason; laze on the mound of daisy patterned grass and feel young against the rot, lithe against the cold immobile stones. The fence is thick now with technology’s spy, youths lurk at the edges, leaving cans to rust amid the docks and nettles.

It isn’t all angels though; a slender needle shoots to the sky bearing Mary-Ann Evans’ name in balance with her nom-de-plume, George Elliot, Death, if not Victorian editors treating them eternally as equals. ‘The Mill on the Floss’ still spinning water beneath the ink she eloped her days through to us.

Graffiti rages like rain on some headstones and is removed, running fumy chemicals to straggle with weeds and clumps of lost words – Karl Marx’s head has borne its blisters – the spray of anger flumed across grey stones in the deadened stillness of misunderstanding. Unquiet ideas wielding rage at stones. Unrest an eternal wage watermarked with philosophy, entombed within the turn of limey, chalky soil, tongues still full of argument.

And ash. Cremation was new to Victorians, Greek urns cavorting with gods and grapes were suddenly purposeful and filled with remains – the flames last ownership of flesh is still contained on cold Highgate shelves, written with copperplate inscriptions, standing in the hollows of walls built with stony flowers, kissing at damp air.

George Michael would have sung it carelessly, a smoky whisper scented with patchouli incense and the drift of a car flooding towards the final barrier in a blaze of metallic, tabloid headlines, a piano elsewhere and tuned with the smoothest dusk intoning the chords of unplanned endings. Christmas an unseen hiatus hovering in radio airwaves, a charcoal mark drawn at the back of a guitar strum blurring the man and the public machinations of life. A small cross marks his place and real flowers angel their faith into perfume sweet as lyrics.

It was the Romans who would feed their dead, stealing this coin from Greek mouths and their customs; naming and abandoning London to a grief, as Christina Rosetti wrote and writes now in the earth, here with these others, echoes still singing, flowing through her remembered hands.