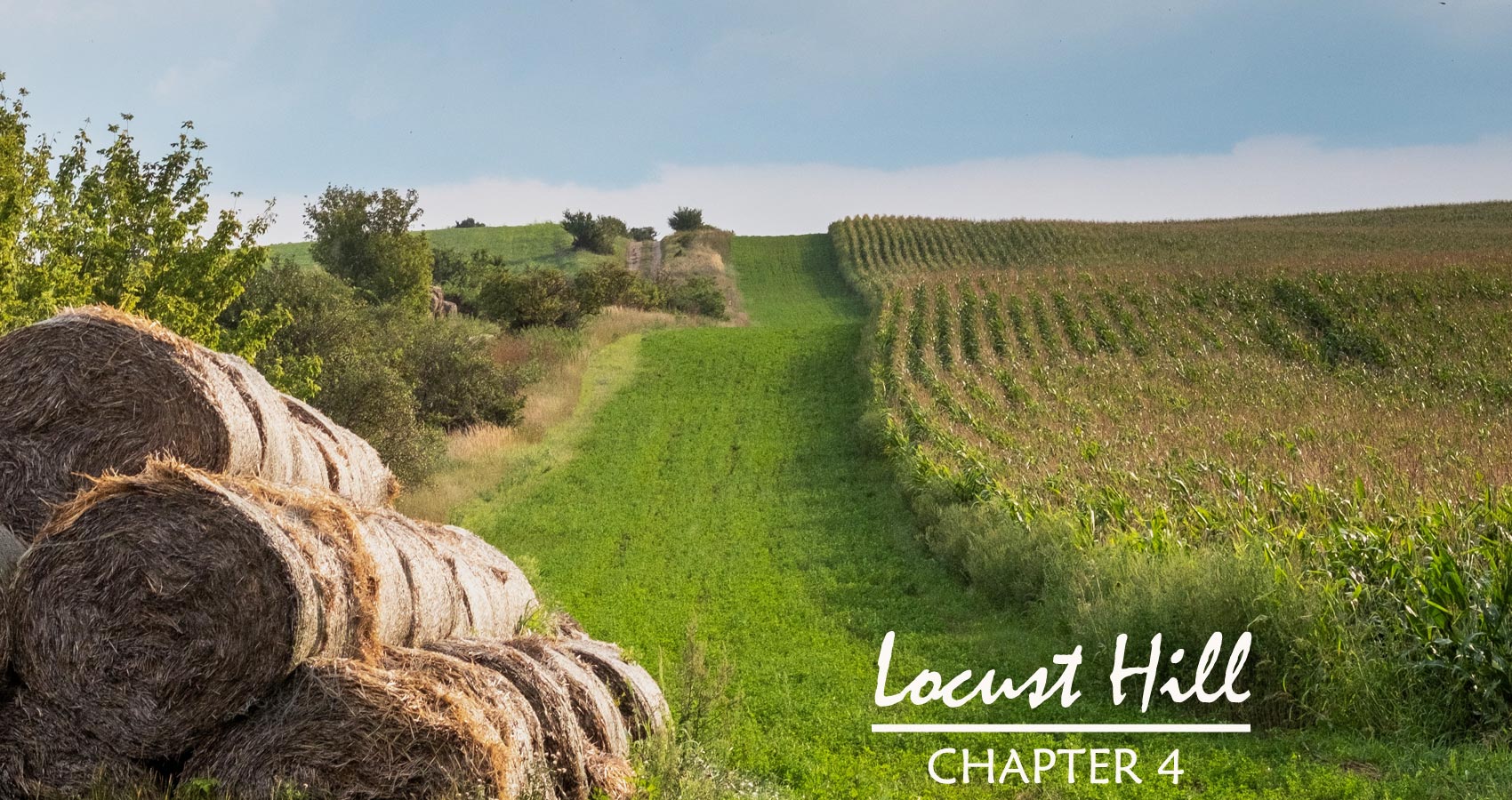 Asking Dad for help with a car and announcing my change of plans about campuses triggered another round of arguments with my mom, who prophesied that I would quickly become a slave on Jim’s farm. (I didn’t dare tell her that his real plan was for me to become a sturdy fertility goddess.)
“This is probably just what he’s been planning for you all along, and you’re just gullible enough to let him get away with it!” she shouted at me as she was wiping the kitchen counter. “He’s dragging you down to his level, exactly what I thought he’d do!”
“Dragging me down? Mom, let me tell you something. I’ll have to improve a lot to get to Jim’s level. And that’s exactly what I’m going to do.” Of course, I left out any reference to Frankie Preston in this argument. But the more Mom attacked, the more resolved I became to make a life with Jim.
Overhearing us from the living room, Dad finally had to intervene. “Cassie’s idea about going to the local campus actually makes good sense, Helen, with or without Jim Russell being involved. I’d thought about suggesting it myself, but I was concerned that Cassie might be disappointed at not going to Morgantown right away like Eric did. And work experience on the farm, or elsewhere for that matter, can be very valuable. I can vouch for that; I did plenty of odd jobs when I was a boy. No reason why girls these days can’t do the same. Cassie can still graduate in the same amount of time. Also, even part-time experience helps a person get a job later on.”
Mom remained unimpressed despite Dad’s argument but retreated as she usually did after he would finally speak up. But only temporarily. I knew that she was just waiting for a new opportunity. Dad, however, seemed relieved, and as soon as Mom was busy in another part of the house, he stopped by my room to say so. He said that he had been worrying a lot about paying for college and the increasingly unstable situation at his plant. He thanked me for deciding to help out.
Later that same week Dad and I went used car shopping, with the proviso that I would repay him as soon as possible. Jim had jokingly told me that people who owned Fords were, by long standing tradition, looked upon with great favor in Locust Hill. Even the Lowerys owned Fords, he said. That was fine with me since I wanted to stay far away from Frankie’s dad, who sold Chevrolets! We soon found a reasonably cheap ‘56 Ford two door sedan, powder blue and trimmed in white, with white leather seats, probably an expensive car when it was new. On the next Saturday I rose at daybreak, tossed a gym bag with a change of clothes and a bag of toiletries in the backseat, and drove my sort-of-new blue and white Ford sedan to Locust Hill.

After a late lunch of tomato soup and toasted cheese sandwiches, Jim and I drove the morning’s harvest into town. As we went down Lost Creek Road, I asked Jim to follow it straight on to Shawnee Highway instead of taking a right turn onto Lowery Lane since I wanted to see the rest of the village. As we turned right onto Shawnee Highway from Lost Creek, he pointed out that, on the other side of Shawnee, Lost Creek Road becomes Cemetery Road.
“Named after that picturesque little Locust Hill Cemetery right over there,” he said, pointing to a spot about fifty yards away on the left. “The old German farmers who were among the first settlers in Locust Hill and helped start up St. Benedict’s parish are buried over there, along with some of the other early settlers.”
At the same intersection was an evangelical church of a sect I didn’t recognize with the local volunteer fire department station standing next to it. “I’ll need to become a volunteer fireman myself when I graduate,” Jim noted. “It’s pretty much a community obligation for young men here, once they are out of school. A few even volunteer to help around the station while they’re still in school, but I’ve not had time for that.”
Farther down Shawnee on that same side of the highway was the local Methodist church and beside it a Pennzoil service station. On the other side of the highway, with their backs to Lowery Lane, were a veterinary clinic, the Locust Hill Farmers’ Cooperative, and the Lowery Diner, in that order. Finally, where Shawnee intersected the other end of Lowery Lane, we came back to the elementary school and the Baptist church. I chided Jim about the Baptist church being so close for his family and St. Benedict’s so far.
“True, but St. Benedict’s is pretty close for you. Would you like to meet us there for Mass sometime?” he asked. “Just to see what’s it like, if nothing else?”
“Wow, my mom would flip if I did that,” I exclaimed. Then after considering for a moment just whose life was being affected, I replied, “But yes, why not? She’ll get over it eventually.” Then, for no particularly good reason, I slugged Jim in the arm.
“You’re awfully rough for a city girl,” he said, keeping his eyes on the road but smiling. “Wanda never hit me.” Then I saw him risk a glance at my legs. “But you’re worth it, I guess,” he added.

The rest of that afternoon we spread compost on the harvested vegetable plots and replanted lettuce and spinach, expecting to eke out another harvest of cold weather crops before the daily temperatures became too hot for them.
As we worked together, I learned to understand Jim in his favorite environment. On the farm he was masterful. Gone was the slumping posture and the sadness that clung to him in school and other settings. Here in Locust Hill, he was completely at home in every sense. As I got to know him better, I came to realize that he knew the names and natures of all the trees and shrubs, even the weeds, knew them as though they were his friends or even his family members. He could grasp the soil in his hand and know if it was ready for planting. Or he could look at the sky—the size, shape, and coloring of the clouds, their direction, speed, and height—and then give a good prediction of the coming weather. “Rain by sunset,” he’d say, or “Clear and hot for the next day or two.” Good knowledge to have when you’re deciding whether or not to cut alfalfa for hay. And though I was learning how important Catholicism was to him, I could see that another powerful religion spoke to him daily in the fields and woods, and that, even at nineteen, he already knew its language as few people ever do in an entire lifetime.