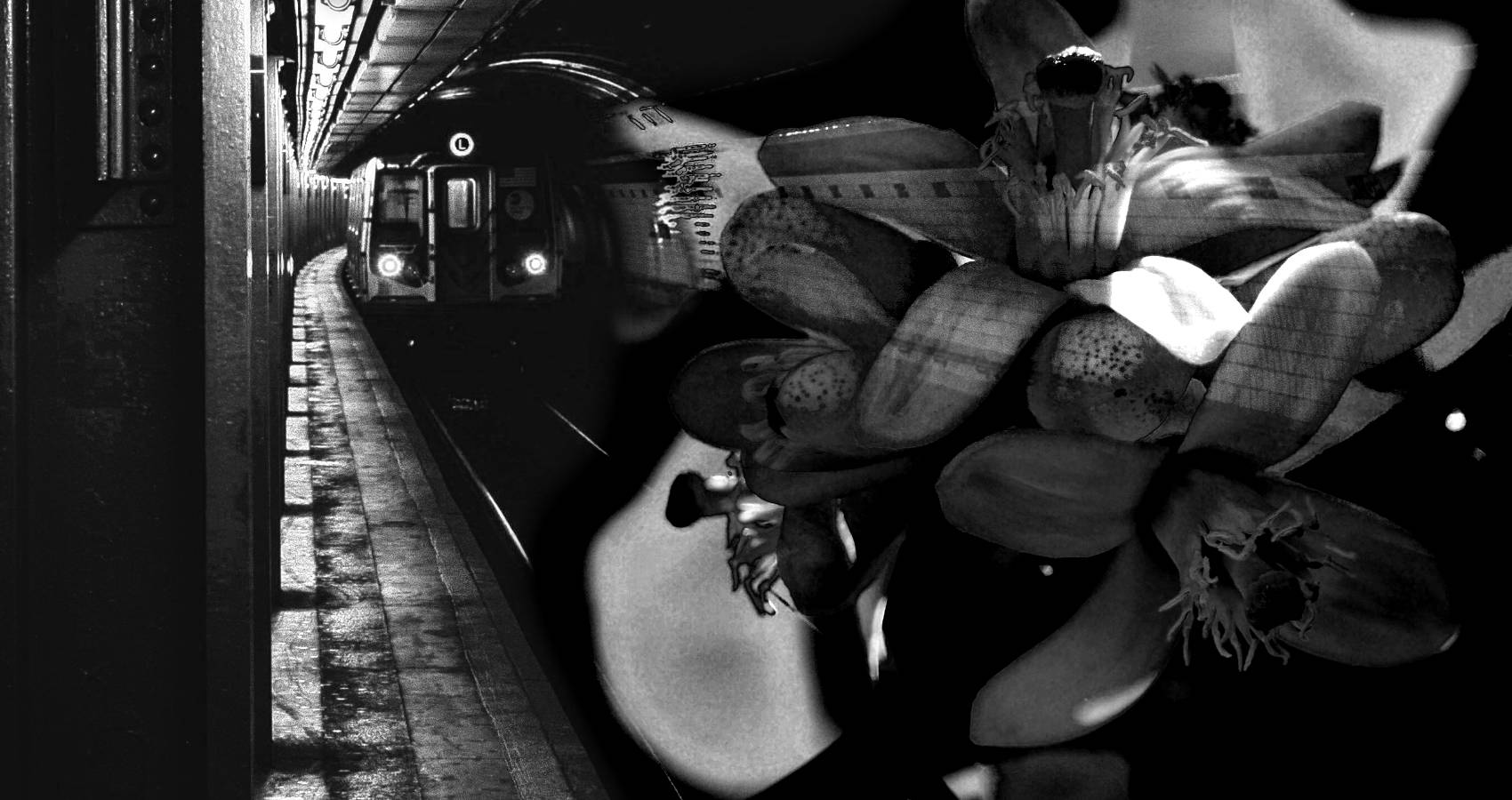 It was a typical Brooklyn summer. The hot pavement seemed to boil up from hell. It burned up the dank streets and broken dreams of every working stiff that toiled until a rich man told us it was quitting time. I was a lonely blue-collar boy, just trying to scrape together a couple of dimes to buy a car to escape this city’s filthy limits. Until then, I’d have to ride the L Train home with the hundreds of other poor saps that stumbled upon unfortunate means.

One would fall short when trying to describe the subway, mostly because there are no words to encompass the smells, sounds, and subjugation that the transit system houses. Entering the subway’s underworld is unnerving, the collection of forlorn souls awash in defeat, addiction, and living decay is enough to turn your stomach. It’s an ever ebbing obstacle of avoidance. I always use the last of my energy to dance around unconscious bums, junkies, and prostitutes littering the walkways. It’s a small triumph making it to the subway platform. There I take my exhausted stance against the least urine-soaked pillar, awaiting the train doors to let the drones of weary masses out, so I can get in and rest my aching bones.

It was luck! I found a seat before the train filled up. God was smiling down on me after a twelve-hour day of tiling upscale New York apartments for trust fund transplants, those who came here to live the dream. The same dream I started out with when I was younger and dumb enough to think I could make a name for myself in the Big Apple. It didn’t take me long to find out that nobody remembers “extra actor number forty-nine” in soap opera magazines. I lost everything, including my dignity. The loss was the common denominator of all of us on the train that evening, as the fluorescent lights hummed a sorrowful tune, a shared soundtrack of longing. That ache that tied all of us, passengers, together. A longing to be home, for something better, cleaner, happier. A need for anything more hopeful than the current conditions. Even with all the wishful thinking, a lot of us couldn’t conjure up air conditioning. Pressing onward, we continued in the crowded steel tube filled with ninety-five-degree temperatures and not a stick of deodorant to spare.

The traveling masses stood together like canned sardines on the train during that ride. The beefy man on my left smelled, ironically, like fish. His meaty, hairy thigh pressed sweatily against my work pants. I shifted uncomfortably, like a domino pushing against whoever was on my right. It was only then that I noticed her, even through my New York etiquette. You see, all New Yorkers skip eye contact. Nobody surveys anyone. She, however, was too lovely to overlook.

The hair cascading down her sides was midnight silken strands. In the dull light of the train, I could still see her tresses shining. The girl’s skin was of buttermilk, smooth and creamy pale, not a blemish dared mar her complexion. Then her eyes! I had beheld nothing before like those kaleidoscopes, green, gold, gray. Her glance met mine as I issued her a yawned apology for spilling my weight into what little personal space she had left in her seat. It was then when her eyes met mine that something unexplainable happened. Perhaps her gaze coaxed me into a hypnotic trance, or maybe I had gotten on the only train in Brooklyn that could transport me out of New York all together.

I blinked once and stood there at sunset, immersed among the orange groves. The clear, crisp atmosphere licked at my face as the wind lifted my hair gently off my forehead. The L Train had somehow taken me to paradise. The bees dutifully hummed as they flitted from blossom to branch, pollinating the air with heady flowering perfume. The ambrosial scent lulled me into such bliss that I felt myself smile for the first time in months, maybe years. I filled my lungs greedily with the cool, pristine air. In my contentedness, I threw my head back to laugh like a child, the way one does before knowing the hardships of time. I was free and well and loving life.

With my view reveling in the vast sky, I saw the sunset in such intimate detail that it felt as though I was lounging on a cotton candy cloud, watching the spectacular scene unfold before me. First shades of melting copper and liquid gold, followed by a lazy, mist filled gray. The tones whirled against the green of the meadows that held the Orange trees in a lover’s embrace. There was a slow swaying of beautiful rhythm between elements, myself, the sunset, and nature.
So grateful was I to be there in this newly discovered Eden that I was determined to stay forever. I’d spend my days in this whimsy, drinking in the immaculate heaven. After all, if anyone deserved to collapse into the softness of this perfect moment, it was me. I breathed deeply with a satisfaction that was almost too magical to be real.

In that moment, I heard the ethereal voice of an angel coming from those billowing clouds,
“Excuse me. You’ll have to wake up. This is my stop.”
I rapidly blinked my gritty eyes, realizing my head was balanced heavy on the shoulder of the girl sitting beside me, her obsidian hair pillowing my face. In her kindness, she endured my slumped frame during the muggy heat of that train ride. For the second time in forty minutes, I apologized.
“I’m sorry. I didn’t mean to fall asleep on you.”
Her ever-changing kaleidoscope eyes flashed tenderness.
“Don’t worry, you clearly needed a rest. Whatever you were dreaming of made you smile.”
With that, she got up and stepped into the harsh New York obscurities once more. The perfume of her sweet orange blossom shampoo lingered long enough to see me home.

Gina Maria Manchego is a multi-medium artist and poet. She has been penning since childhood, her goal is to create dynamic scenes with the written word. Gina lives in the wild mountains of Colorado, USA. She finds joy in the wilderness around her and channels that inspiration through photography, gardening and baking delectable carbohydrate dense snacks.