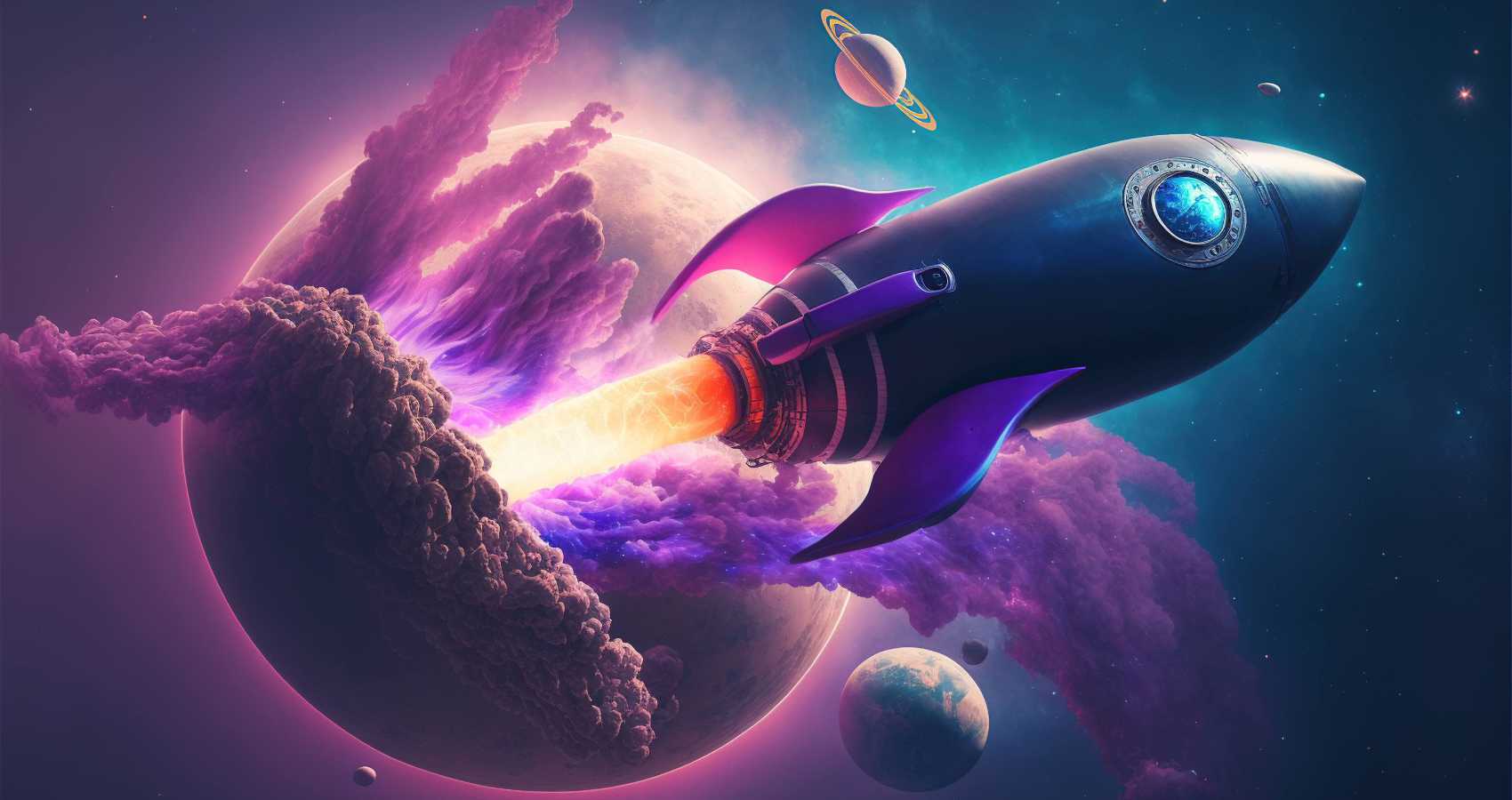 See The Sea Jewel zip around the cosmos like a bus that knows no bounds; see it pop up in the remote corners of this glittering universe like Mary Poppins’ carpet bag of many surprises; like a magical, mischief-making lunch basket packed tight with lipstick, lyrics, and lunar love…

Everyone aboard The Sea Jewel can give input about the show, but no one decides the next performance destination but the Captain.

The Captain, as a rule, is always a child.

If the humble hero of this little tale is, to be, well—a spaceship? —then its villain shall be The Cages. A cage, as you know, is a thing that traps you. It can even trap you without you knowing you’re trapped. (Cages are all clever and silvery like that).

Cages can be found anywhere, really: in prisons and courtrooms; in offices and school buses; in girls’ locker rooms… (Oh, the fond memories: laughing easily with friends, then being crazy-quick to gym class; putting your gaze on lockdown, while your dirty little body focused its entire being on casually changing clothes…).

Some cages can be found in quieter places, too—in one’s home, for example. Although, to be clear: the past is the past, no? Why bring up our suburban home in a kids’ story? Why bring up blue Fantasia fairies of gentle deviance, memories of sitting up tall in your grade school chair and trying, like homework no one directly asked of you, to “be straight?”

To feel some romantic feeling, please, for the sandy-haired boy sitting at the desk next to yours, the shy new kid—Matt? —drawing an elegant, cool, white American Airlines plane, as you energetically zoo up the ugly little brown house on your own paper? Wild tails and sharp claws pouring out the front door like a Raptor Flood come to wash away the suburbs…No point. No point at all, says this Writer.

Anyway. This was long ago (girlhood) in a land far, far away… (the Midwest!). The “school-time” cages may have my memory, you see, but the “make-believe” ones have my heart. And no cages on Earth could ever surpass the great intergalactic mystery…The City of Cages. Think: darkly numerous cages, stacked high in the drippy Dungeon of Time on a ship you’d never suspect of concealing silver bars: The Sea Jewel. It’s just so pretty.

This hybrid ship, or star ark as the Intergalactika Peace Committee (IPC) likes to call it, is the first of its kind—a “traveling musical.” It hops from planet to planet, bringing down the house. It skims the seas, fizzing and popping with everyone’s favorite showstoppers.

It sparkles into town like Fourth of July fireworks and leaves bedecked in blue roses.

The Sea Jewel is never “late” to a show, for it’s never scheduled. It just sort of shows up, you see. It appears in your town, on your planet, in your galaxy, whenever it feels like. One night, it’s the twinkling tree towns of Lumenia; the next, the crimeball of sandy Pyra; the next, the snowy, gambling dens of Liquor Isle; and at last, the forested kingdom of New Lythia…

The Captain, as a rule, is always a child…

Did I mention? No “Box Office” can be found. This flag-less, moonlit, baddie brig only ever comes to you. The best part? There’s no one performance. Every night is different. Juggled up. Roles are traded. Moustaches and lipsticks? Tossed back and forth like hot potatoes! Songs? Made up atop the piano with the blue dancing cat. Enobarbius the Bold. Me-ow. That furry stud.

Where does it sleep? Upon the waves. In the stars. Wherever it can, really.

In a nest of watery city lights. In a forest of tired and gentle laundry daydreaming. Anywhere that is at peace and cozy and warm, and okay with ships being, well, you know, musicals.

You’ve never seen The Sea Jewel perform live, but I bet you wish you had.

The City of Cages? Renovated, apparently. It’s very hip. (They call it the new Brooklyn). They say at night, when the universe is snoozing, dozens of baby queers unclick their cage doors, come out, and dance, toes light as rainwater, about the jungled deck. They say that one girl in this child city sleeps bundled up in intergalactic cloaks from all the various planets she’s been to, like a quilt of past lives. Her dreaming-pillow: a stash of blue roses.

This child is now Captain of The Sea Jewel, they say.

They say she may not talk much, but her eyes sure tell a fiery tale. That she’s proud to be a girl who loves spaceships, show-tunes, and other girls.

She is her own sea jewel now, in a way.

And the key to her former cage? Dangling silverly upon her neck.

They say if the universe was a better place and that place was a spaceship, it’d look a lot like The Sea Jewel. They say if you can put a pen to paper and unlock its slow, sleeping colours, that one day, soon, you’ll find your blue rose.

Sasha Wolff is a queer writer living in New York City. Her writing can be found in Parhelion Literary, Maudlin House, 365 Tomorrows, and The Oxonian Review. Sasha was nominated for the Henfield Prize in Fiction by the faculty at Columbia University, where she received her MFA. Recently, she was awarded Second Place in the Children’s/Young Adult Fiction category for the 91st Annual Writer’s Digest Competition and was shortlisted for the Fractured Lit Reprint Prize and the 2022 SmokeLong Quarterly Flash Fiction Award.