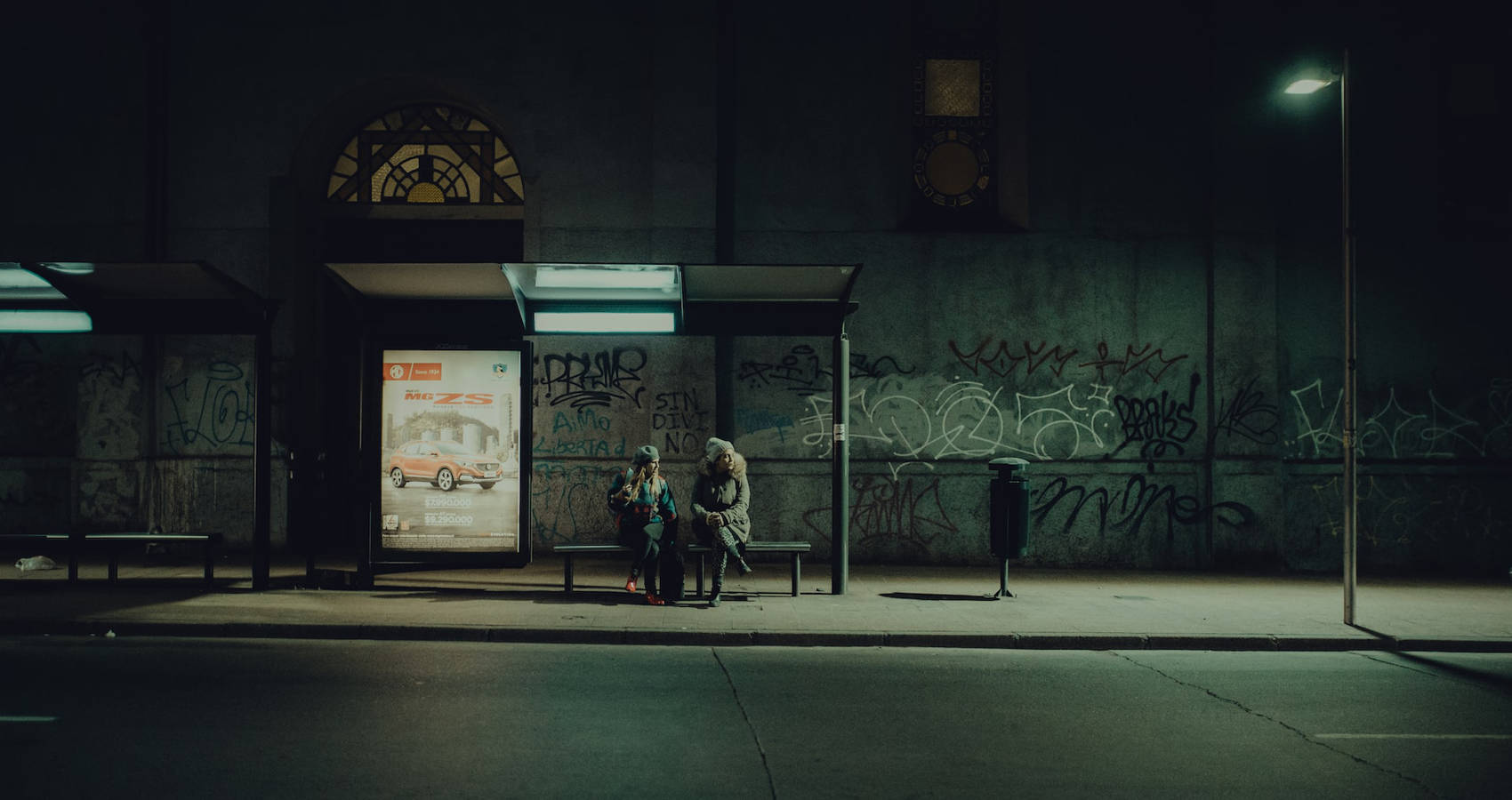 On her bed Ingrid sobbed. She sobbed as if her heart had broken which of course it had. It wasn’t just the way Delilah spoke to her that hurt Ingrid, it was the truth in her words. In her heart Ingrid knew and probably always did. Ingrid couldn’t be happy for her best friend all those years ago. She had told herself she had been. She congratulated her. But in Ingrid’s heart of self-pity she could only wonder why such a good job failed to come her way. Delilah had been so happy. She had thanked God while Ingrid questioned the same God. The God they both were raised to believe in. Why had God blessed Delilah and left Ingrid jobless? Did God play favorites? Ingrid wondered that then and she wondered again now. Why had God blessed Delilah with her gift, a gift she hadn’t been afraid to pursue. It wasn’t fair. And yet Delilah was right. Ingrid should have been happy for her best friend. But no matter how many times Ingrid had insisted she was in her heart of hearts she couldn’t be. And Delilah knew it. She had sensed it. Ingrid despised her for knowing her so well.
And it didn’t end there. Delilah had also been right to point out Ingrid’s failures where her own writing was concerned. Ingrid had written many short stories. She had notebooks filled with old poems she’d written. She had been too shy to submit them for publication. The thought of poetry readings filled Ingrid with hope but her shyness always got the best of her. Delilah was right. Yet her success as a writer gnawed at Ingrid.
Ingrid had known Delilah since they were in the third grade. In all those years Delilah never expressed interest in writing. On the other hand Ingrid had written a religious poem and had received a diary on her twelfth birthday. Then again Delilah’s winter essay had been chosen with Ingrid’s as one of the best in their class. Delilah had been proud of that but she didn’t write much else. Ingrid would have remembered if she did.
After drying her face with a towel Ingrid picked up the winter story Delilah had published. The book she had dedicated to the friend she abandoned. Ingrid could read it. Why shouldn’t she? Something about its title irked her however and soon enough Ingrid realized why.
Delilah didn’t write this! This was Ingrid’s work! She recognized her fifth-grade essay. Ingrid remembered what she wrote. Simple descriptions but her descriptions nevertheless. Heavy snows but still building snowmen with family and friends. The beautiful pink skies and the quiet atmosphere of fresh snow. Bundling up with mittens, hats and gloves. In fact, the more Ingrid read she not only recognized her long ago essay she also recognized a picture book she wrote and illustrated during college days. Delilah had been around for that too.
Delilah’s best-selling book was based on a young woman who loved Christmas but never had the money to enjoy it. The woman goes around the snowy town window shopping in tears because she’s always broke. She failed to understand that Christmas is not about presents and decorations but it takes time for her to learn this lesson.
Ingrid slammed the book down. In a fit of fury she stalked out the door ready to interrogate the thief who obviously returned to steal more material! Ingrid snatched the book she had just thrown and stalked to the kitchen only Delilah really had gone. Ingrid swallowed, not sure what to think. She threw Delilah out but Ingrid doubted she would just go. She looked around but Delilah’s suitcase was gone. She really had left. Oh well. Ingrid knew where she’d lived. She’d go there instead!
But as she opened her apartment door Ingrid paused as she placed a foot out the door. What if she was mistaken? There was that possibility. After all ten years was a long time to be gone. How could Ingrid be that sure that these were her writings? She asked herself this even as she knew the crushing truth.

“You don’t plan to expose her ?” Evelyn was incredulous. “What was the point of this Ingrid? Why did we come out here?” Ingrid placed her hand on Evelyn’s shoulder.
“I don’t need to expose her. Delilah knows what she did. Her parents know. They’ll all have to live with themselves. Nothing will change that, especially now. It’ll be on their conscience. All of them.” Ingrid turned to Delilah who was twisting her fingers. “Remember what I said. Stay away from my writings. Return to California with what you stole and don’t contact me again. You may have gained wealth but try to find your self-respect. More than anything write your own story or poem. You know what they say. Can’t stay relevant if you don’t submit new writings. It’s like the singer who has to have new hits if he’s to stay hot. Or she.”
Ingrid turned to go. “Come on Evelyn. I’ll get us a cab so I can take my amateur paintings.”
“You don’t think I can write Ingrid?” Delilah grit her teeth. “My essay was also chosen as one of the best in our fifth-grade class unless you’ve forgotten. And it didn’t start like this you know. I sent one of your poems as a gamble. I never dreamed they would accept it. They asked for more so I obliged them and before I knew it some publications began to pay for them. I intended to tell you so we could figure out a way to profit together but when I asked you that one time-”
“Where are my paintings?” Ingrid hotly interrupted. She just wanted to go. She heard enough.
“They’re in her room,” Oscar offered. “All of them. I’m sorry for my daughter’s thieving. It’s shameful.”
Sadie got up and gripped Ingrid’s hand. “God bless you for not exposing it,” she said, almost desperate. “I know it’s wrong but…” Sadie shook her head and stumbled away cow heavy as ever. “Forgive my rudeness but would you like some coffee? I meant to offer it sooner. I’m sorry.”
“Oh thank you Sadie but I can’t stay. But thank you really.”
“What the hell is wrong with all of you?” Delilah shrieked. “This woman may ruin me and you offer her coffee? And stop talking about me as if I’m not here! Here take your damn paintings! Eat them if you want but get them out of here!” Delilah threw them towards Ingrid and that did it. Ingrid slapped Delilah so hard she fell face first to the floor.”
“Oh my God no!” Sadie cried but Ingrid grabbed the large black bag that held her stolen paintings. She would know which ones were missing once she got home. She called for Evelyn and they quickly bolted out of the apartment letting the door slam behind them. Good thing the Lucas family lived on the first floor. There was no elevator to wait for.
“Hah! You fixed that crook Ingrid! I still think you should sue her or something but she deserved that slap. Hell, she should have got more if you ask me. She’s lucky you weren’t the spiteful writer who could have made her life a living hell.”
Ingrid walked towards the bus stop. There they would catch the bus that would take them to the train station. Ingrid wished she had money for a cab. Maybe one day. Soon. “That can still happen, you know,” Ingrid smiled. “Delilah is as stubborn as she is stupid. She won’t let this go. It’s okay though. I’ll be ready.”

A.M. Torres has published The Child Series beginning with Love Child. It's followed by sequels Child No More, Child Scorned, and Child Game all available on Amazon. She has also published two poetry books Shadowed Tears, and Turmoil also available on Amazon. J and K Christmas has been her annual Christmas poem and short story publication. She currently lives in New York City, with her two sons Jason and Kristofer.