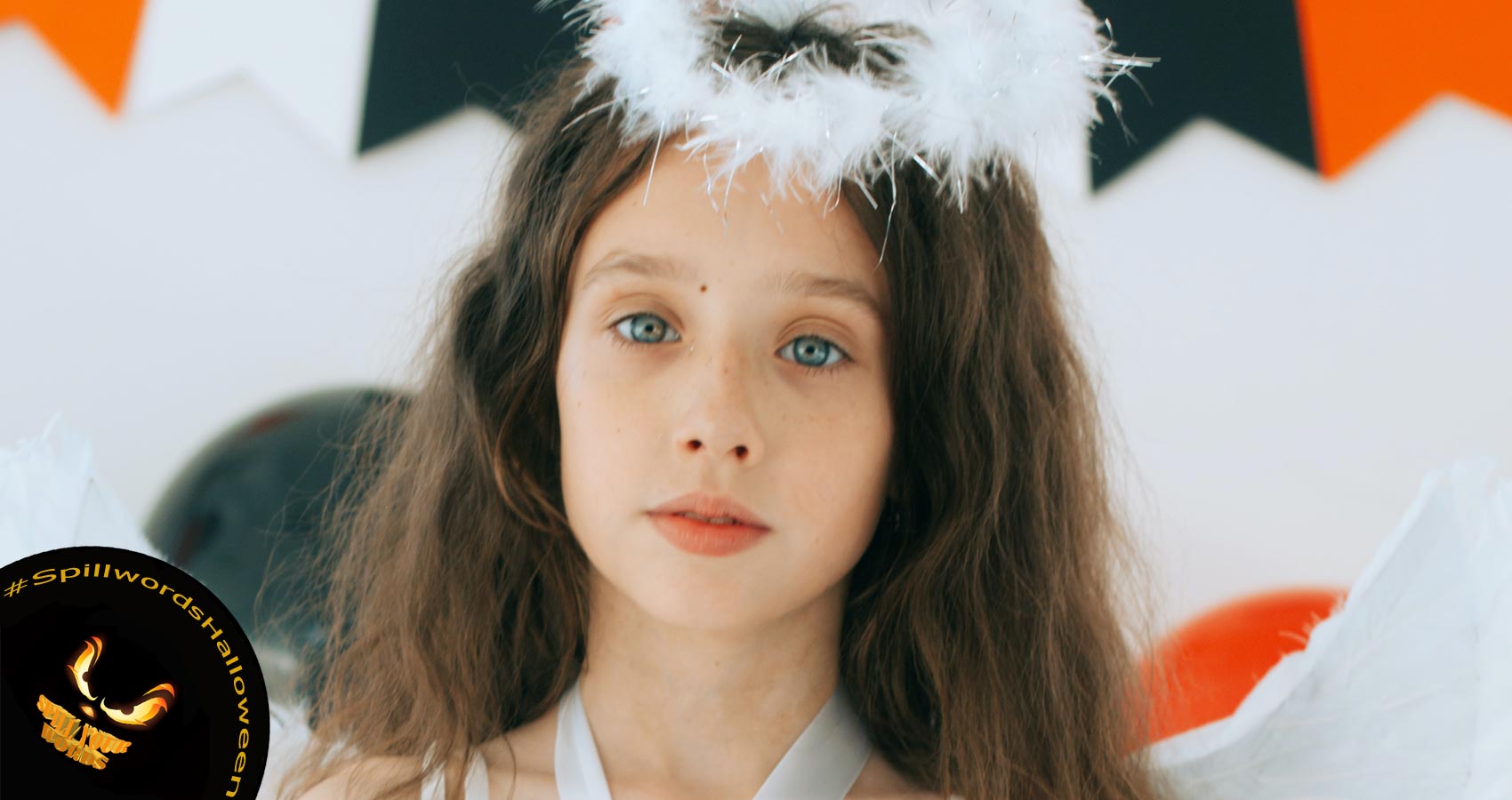 Wee goblins, witches, zombies,
Frankensteins and ballerinas wait
in fidgety single file at the mall,
spreading their bags for another haul.
The streets are unsafe, full of ghouls
and real monsters who slide razor blades
into apples, inject caramels with strychnine.
So parents pack kids into station wagons
and head for the barrels of free loot
at Sears and JC Penney.
I have come to find a place to eat.
The mall is splendid and fluorescent.
It makes me dizzy. I catch sight of myself
in a storefront window. I’m not the same.
I break through a candy line near Walden
to look for a book that does not exist.
My eyes meet those of a little girl
dressed like a sparkling princess.
The hem of her gown trails on tiles
as she waves the glittering magic wand,
a long plastic bubble hoop with sequins.
I smile, reminded of my own child,
far away on Halloween and all the days.

Legions of ashen dead rise
from tombs in Charlottesville.
They march slowly through the fog and mist
toward the Rotunda, where yesterday
during a mid-semester commencement
the solemn president told students
what matters most is time.
I was lost and hastened by
though the word “time” reverberated
like a distant cackling of crows.
Last night I visited the dorm room
of Edgar Allan Poe.
Lighted twenty-four hours a day,
they shield it from vandals
with a thick sheet of Plexiglas.
There is even a raven that caws
a prerecorded “Nevermore, ”
but the raven was broken.
I peered at the poet’s chairs, bed,
escritoire, trunk and woven rug,
the stark, cold fireplace.
Two cheerful blond coeds had directed me.
We trudged through mounds of fallen leaves
that crackled under our shoes.
The leaves they were crisped and sere.
Earlier, in daylight, the trees
had burst into flame, October’s
death rattle in these blue mountains.
It was midnight when I found Poe.
He looked at me looking at him.
No candy sparkled in his woeful eyes;
his eyes were empty bags spread wide.
I thought of the blond coeds,
neon skinned, fecund Cinderellas,
and fled.

Parents’ weekend, a football game and film festival —
the streets are clogged, the weather, dreary.
Some aging actors have shown up.
The younger fans don’t remember them.
I press through the crowds on my way
to a row of hippie shops to find a present
for my daughter. She’s twelve now and likes
leather bracelets and necklaces with peace signs.
Last year it was still Toys-R-Us.
Students and their parents bloat the campus
and walkways. The parents wear name tags.
My child was taken five years ago.
This year I saw her two weeks in July,
“quality time” decreed by black-suited lawyers,
birds of prey, demons of civility.
A few nights ago I told her a story over the phone,
a watery version of “The Fall of the House of Usher”—
she said she wanted a scary one.
Connected by eight hundred miles of optical cable,
our voices became singing electrons,
and we somehow managed to hug each other.

What truths are self-evident?
Jefferson’s cool blue reason,
an astrolabe of precision,
squirms in the eye of a raven.

The dead have gathered outside
my motel window. I draw back the drapes
and watch them sway and bellow.
Poe stands apart but watches intently.
His eyes bulge with defiance.
He stares not at me but an old man
with wispy gray hair atop his skeletal horse.
Jefferson.
He points, signals me over.
A thick plate glass door separates us.
I pull the curtains, turn on HBO
and finish my lukewarm coffee.
I scan my few chairs, unmade bed,
trunk, rug and escritoire,
where I will tally some receipts.
I’m on group discount; money is scarce.
The dead moan softly now, begin to dissolve.
It is their night. They want us to love them.
We want tricks or treats, McDonald’s,
apples bobbing in tubs of iced water.
I don’t need them yet;
I want a different kind of dead.

Once I went into the wilderness
with three black stones and a coil of tobacco ties —
half-hearted homage to an old ritual.
I don’t believe in miracles.
Bored, lonely and stiff by dusk,
I turned to leave and saw, fluttering
on the horizon, an immaculate Roman temple.
A miniature figure made of fire
danced in one dark window. Psyche, my soul?
The entire forest glowed with luminous folk,
sprites, the ghost lights of Indians,
will o’ the wisps, the wandering lights
of medieval travelers.

A slatted ladder unfolded in air
like a Venetian blind
between the temple and where I stood.
Only the mad see what is not there.
The spirits came to say that we,
not they, are the dead.
I wanted only to get away for a while,
think about my child, settle some nerves.
I asked for nothing, beseeched no god.
Though I stood transfixed, dumb,
beyond shrunken space and time,
I did not climb that ladder, that gift.

Her picture has been crushed
in my wallet for six years.
Its edges have turned yellow
and the plastic envelope, foggy.
She is dressed like an angel,
the usual halo propped above her head
by some invisible wire.
It was our last Halloween together.
I took her from house to house
and sometimes had to say the words
since she was still shy.
We made a modest haul.
I inspected every orange and nut,
studied Milky Ways for torn wrappings.
The glow from our Jack-O-lantern
burnished her face with soft gold.
Back home she danced in the kitchen,
silhouetted by the cold bare frame of a glass door.
She twirled and giggled and yawned
until I scooped her up and carried her to bed.
She fell asleep in my arms.
Many and many a year ago.
I don’t know what costume she wears now,
tonight, on Halloween.
With slow, patient zeal, I mourn the quick.

Four volumes of Louis Gallo’s poetry, Archaeology, Scherzo Furiant, Crash and Clearing the Attic, are now available. Why is there Something Rather than Nothing? and Leeway & Advent will be published soon.He was invited for and interview and reading of his work by National Public Radio’s program “With Good Reason,” broadcast across the country, 2021. His work appears in Best Short Fiction 2020. A novella, “The Art Deco Lung,” will soon be published in Storylandia.National Public Radio aired a reading and discussion of his poetry on its “With Good Reason” series (December 2020). Chapbooks include The Truth Change, The Abomination of Fascination, Status Updates and The Ten Most Important Questions. He is the founding editor of the now defunct journals, The Barataria Review and Books: A New Orleans Review. His work has been nominated for the Pushcart Prize several times. He is the recipient of an NEA grant for fiction. He teaches at Radford University in Radford, Virginia.