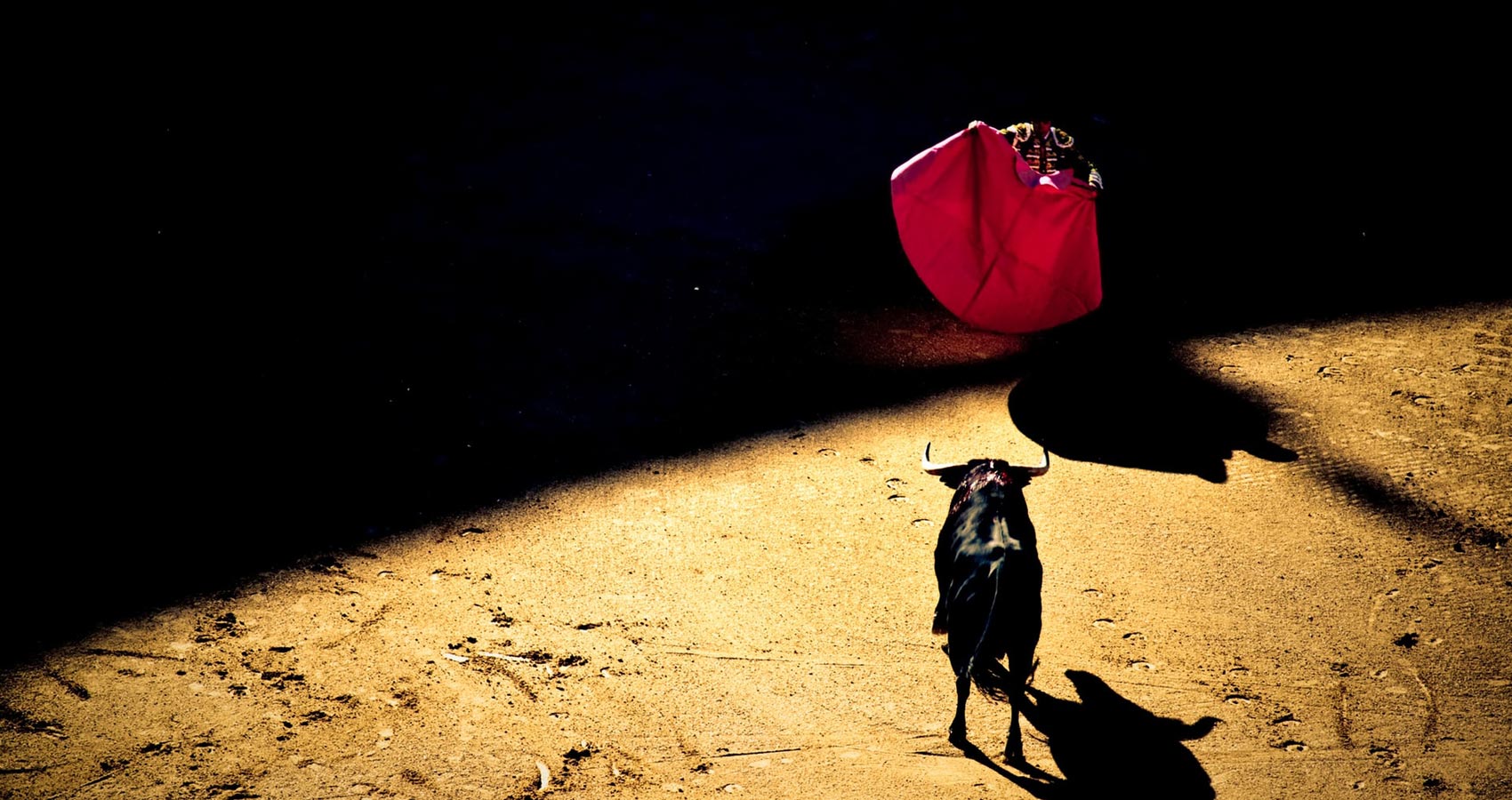 The colourful creaminess of her cakes, tarts and pastries gave her shop a fairy-tale aspect that her evil eyes complimented, for fairy tales are often dark. Her billowing blonde hair opposed the sharpness of her pointy chin. Her blue eyes ejected disdain. A customer said: “Her eyes are spotlights of hate. She mutters ‘Pig!’ when male customers leave her shop. But what the hell. Her goodies are irresistible; and so, what if I’m a pig? Have I ever claimed to be anything else?”

Another customer said: “Her apple pies are magnificent, so I take the abuse.”

A psychologist said: “She’s as sour as her strawberry tarts are sweet.”

Lawrence Meyer, another regular, claimed: “Her chocolate pastries have a sweetness only rivalled by her bitterness. But the world is bitter-sweet, so why not accept reality and gorge on her sublime wares?”

She needs a throne, Lawrence thought, under a sign saying: Queen Bitter Bitch at No One’s Service, Especially Yours, Arsehole.

But her wares were wonderful: towering gateaux; mountainous, creamy constructions with nuts; chocolate in pastry; kiwi, strawberry, and mango tarts; Swiss chocolates with liqueur centres. Colours seen through the shop’s windows lured in the innocent. You had to be intrigued by extreme behaviour to come back. Many people went back. Things intrigue if they don’t affect you directly.

Entering the shop, Lawrence heard: “Who took a chocolate liqueur? Own up or you’ll all be docked some pay.”

The South Americans remained silent before those hot gems of piercing accusation that stood over the till like the eyes of a monster guarding a precious treasure. Residencies depended on the South Americans having work contracts, which weren’t easy to get; and they never knew what she might do.

“The till tyrant” had, as usual, ignored his “buenos días.”

A staff member placed the napolitana chocolate unwrapped on the paper used to wrap the products. Lawrence wanted to eat it directly. He silently paid. Politeness only made Night Meir even more aggressive.

Lawrence’s blonde hair, square jaw and blue eyes reminded “Night” of the Nazis, ironic as Lawrence’s Jewish surname meant enlightened and “Queen Bitch” reminded him of Nazi genetic and social engineering. The feeling was mutual, but her napolitana chocolates had a creamy, sweet smoothness that his tongue found irresistible. That tongue wouldn’t allow bad manners to impede satisfaction. Its priorities were clear. And Night did provide interesting stories that Lawrence used to entertain friends.

Lawrence passed under one of the equidistantly placed lit-candle-shaped arches in the bullring’s outer wall that dotted a circular walkway whose interior walls displayed photographs of bullfighters and glass cabinets housing the implements of the bullfighter’s trade. The artefacts exhibited created history, linking one to a scheme that had provided pleasure to generations and would do so for centuries to come.

In the walkway’s bars, women wearing black dresses and red ribbons in their long, black hair served drinks to cigar-smoking aficionados who gave Lawrence the pleasing impression of preferring analysis to political correctness, like stepping into a world of exciting reality that offered a direct introduction into things that society wished to crush. Perhaps one day society will eliminate accidents and death? Who knows?

Lawrence stopped to study a stuffed bull. The bull had died in that ring. Its needle-sharp horns turned light grey from a black base. Bullfighters’ feet must remain still as such needles flash by.

Lawrence passed through a rectangular opening that revealed the curving tiers of the arena’s stands. A man wearing a beret was pushing a wheeled metal box around the yellow sand below, leaving a white, circular line over which the picadors’ horses were not allowed to step. Spanish flags covered the tiers’ curving facades. Lawrence wondered what anti-bullfighting fanatics would have made of the activity they supposedly detested being linked to patriotism. He smiled, realising it would be impossible to know about the flags if you had never been in a ring and all your friends gained their moral superiority from hating what political correctness has told them to hate. Captured fish wriggling in a net wouldn’t have aroused any interest in them because no organisation with political power was telling them to detest such inconveniences for fish; hence no excuse existed for further increasing their moral superiority when it came to the suffering of certain forms of marine life. Those scaly monsters could drop dead as far as the morally superior were concerned.

The first bullfighter had jumpy feet. His passes didn’t unite, the bull’s movements hence jerky. The crowd groaned, dismissing that the bullfighter had been hit recently and was still recovering. Paying allows the joy of belligerence.

The bull unexpectedly jumped up, trying to hit the cape that should not have been above its horns, groaning and whistling, caused by facile outrage, erupting around the ring, like a verbal virus, no fluidity in the bullfighter’s actions, only disconnected passes, the bullfighter stretching away from the horns, Lawrence intrigued by this cavalier ignominy that dismissed as irrelevant what the bullfighter should have revered. That for a behaviour connoisseur is fascinating.

He doesn’t care what these people think, Lawrence thought. And why should he? These complainers are no doubt themselves petrified by danger. They’re nothing to him. He’s going to grab today’s big money and run. He’s already taken enough risks in his young life to deserve it.

Lawrence spotted Blue Eyes. He covered his smile with his right hand.

She loves insulting people, he thought. But she won’t do it to your face.

His gritted teeth stopped him laughing while thinking: The Queen of Bitterness sells deadly sweetness.

The bullfighter dragged a cape, the bull following, unethical dragging unethically tiring the bull out, making it easier to kill, the crowd whistling like trains flashing through stations, that voice yelping: “Disgraceful!”

Lawrence grinned. That bullfighter is showing fantastic moral courage, he thought, not caring what the unjustifiably morally superior think.

The bullfighter aimed his sword at the bull, the bull’s stomach rising and falling like a rough sea, heaving before sharp steel, air sucked in and released from bull nostrils that opened and closed like the caps on steam-engine funnels, bull mucous glittering in the sunlight, the now silent crowd hoping to see killing with style. Each phase of a bullfight, like a new episode in a TV series with changing characters, evokes the everlasting thrill of combat, one against one. You can enjoy that thrill; or you can adore your supposed goodness and claim that that thrill is repulsive. It’s up to you.

I go, Lawrence thought, to Bitch’s shop because primitivism allures.

Man, and bull charged each other: one with reach and ingenuity, the other with brute force. The man should have reached over horns lowered by the cape to bury the sword between the bull’s shoulders, but he stepped to his left to avoid the horns, spearing the bull from side on, eliminating risk in an act of murder.

The bull crashed onto its side, hooves pedalling in a futile attempt to rise, a dagger thrust into its spinal cord to kill it.

The pedalling and the whistling stopped simultaneously.

Lawrence thought: If Bitch annoys me today, I’ll nail her.

Spectators denouncing bullfighters as gutless annoyed him. Her moral superiority enflamed his resolve.

He ordered his usual napolitana chocolate, asking not to have it wrapped. Disdain smeared those bitch irises.

Something has to give, Lawrence thought, if your head breeds moral superiority. In her case, it’s her eyes. They’re windows to No Soul.

She put the change in a steel bowl, avoiding physical contact, appalled he ate those napolitana chocolates in public, like an animal.

He spun, demanding: “What?”

Her mouth quivered, thumping fear stunning her thoughts, shattering her license as Lawrence stomped back to the counter. She stepped back against the wall. The South Americans stood open-mouthed. Their tyrant’s fear charged them with liberation.

Lawrence, leaning over the counter, with eyes like sapphire fires of outrage, barked: “What did you say?”

She couldn’t respond. Her consistent nightmare of a giant, hooded figure invading her childhood bedroom filled her head, rattling her lips.

“You wouldn’t make much of a bullfighter, would you?” Lawrence sneered.

His now low, chilling voice made her flash her right hand up to her face. The unwrapped napolitana chocolate suggested something unnaturally revealed.

“Don’t let this gutless cow put you down,” he told the South Americans.

One of them was missing: Probably sacked. That flamed Lawrence’s fire of moral justification even more.

Many people in the owner’s embittered imagination were giant, hooded fiends; so she attacked before being attacked–her response to the unknown.

“I couldn’t care less what your problem is,” Lawrence said, “because you’re just a pointless, gutless, arsehole bitch who deserves to DIE!”

Because it had never occurred to her that someone might react (she believed her feelings represented veracity), surprise stumped her into shocked silence.

The psychologist, entering the shop, heard: “You’ve had years to sort out your problem and you’ve done nothing about it. You’re a disgrace, unlike bullfighters who’ve got the guts to get into rings.”

The woman’s blonde hair resembled wild snakes writhing against the shop’s white walls, snakes in combat, her fingertips entering her mouth, like seeing a demon. How was Lawrence to know that she had been a victim of child abuse? How could she know herself if it had happened during the phase of infantile amnesia?

Leaving, Lawrence swung his right arm up triumphantly, as bullfighters do after successful faenas. No napolitana chocolate had ever tasted so fine. He gorged it while walking. A homeless guy said: “Bon appétit.” Mouth full, Lawrence raised a thumb in acknowledgement, the homeless guy chortling at Lawrence’s shameless, culinary satisfaction.

Lawrence ignored what others thought about his habits and the homeless guy loved it.

Blue Eyes snorted: “What are you looking at? Get back to work.”

The South Americans stared back. Her weakness hardened their resistance.

Conviction had abandoned her voice, false tone clear, the South Americans now empowered by her fragility.

“This is my card,” the psychologist said. “Can I speak to you? No charge, of course.”

He suspected she suffered from debilitating shame, his sincerity overcoming the hooded threat; she said: “I’ll ring you. Take something for free.”

Suddenly she felt there might be someone she could admire, like a gift she thought she would never receive.

Facing the South Americans, she said: “Please–let’s all get back to work.”

“We want María back,” one said.