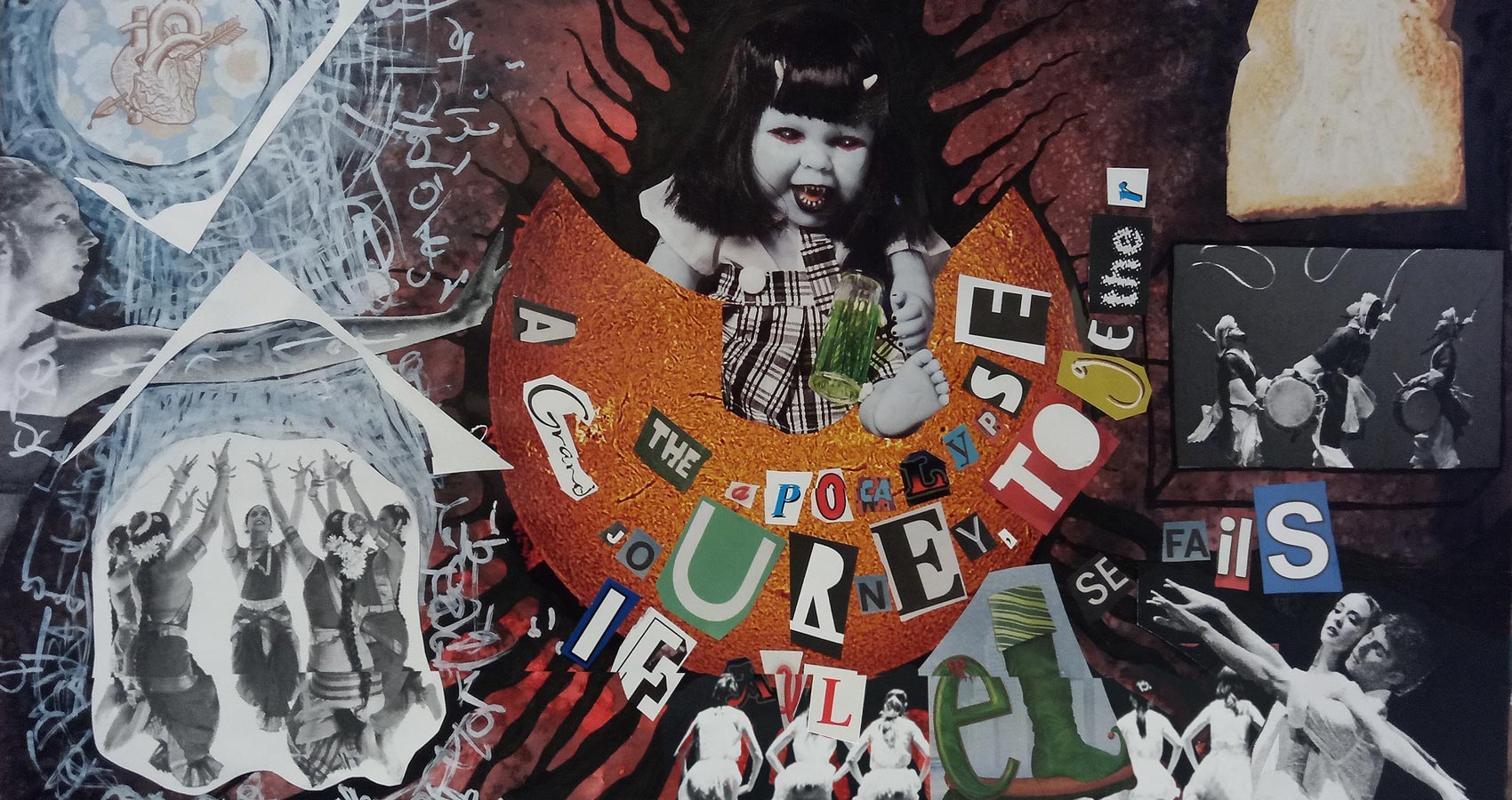 a grand journey, together

If all else fails

Illustration description: A chaotic scene on a dark, splashy, watery background of black, violet, and red hues. The centre of the image is occupied by a demonic looking baby doll (cut from the Dec/Jan 2006/7 issue of Bust Magazine), black eyes underlined with red, fanged mouth open in a satanic cackle. She has shoulder-length black hair with bangs and tiny forehead horns. Her skin is grey-blue, she wears black and white plaid overalls over a white t-shirt. Her nails are painted black, and she seems to be holding a stein of Absinthe-green liquid. Her tiny foot sticks out of a giant roiling sun (cut from the November/December 2001 issue of Sky News Magazine), seemingly yawning open to release the demon and her dark essence, which manifests as black, radiating tendrils. The words of the haiku hang like strings of swinging, rattling beds under the figure of the baby, created from myriad clippings from various papers and magazines. Zooming out, the top left of the image is occupied by a sepia and white drawing of a human heart, shot through with an arrow, on the background of a circle featuring white and brown carnations on blue (also cut from the Dec/Jan 2006/7 issue of BUST Magazine). The top right is occupied by a piece of toast with the image of the Virgin Mary impressed on it (again, from BUST Magazine Dec/Jan 2006/7). Below the toast, 3 figures dance with drums. They wear dark coats over light clothing, light sashes knotted at the back, and hats that seemingly have ribbons attached to them, waving over the dancers’ heads. This and the rest of the cutouts are from the Summer 2006 issue of The Dance Current. The dancers in the bottom right, one in a pale dress with arms swept back, the other in a pale shirt supporting the first with forward reaching arms. The line of girls in pale dresses occupying the bottom of the image, backs to the viewer, sitting on their knees, seemingly facing the demon baby looming in the sky above. The circle of dancers just under midway up the left side of the image, contained in a blob of white, all wearing saris and flowers in their hair, seemingly levitating with feet tucked up behind them. Their arms are stretched upward with fingers fanned out, reaching toward the shot heart. Two triangle-like fragments point to and from them and the heart, one seemingly forming a roof over the group, the other pointing down from the heart. Finally, the figure reaching from the left side, only visible from the midpoint of the body and the waist up. They seem to reach a halting hand toward the sun, expression controlled but urgent, eyes fixed on the demon baby.