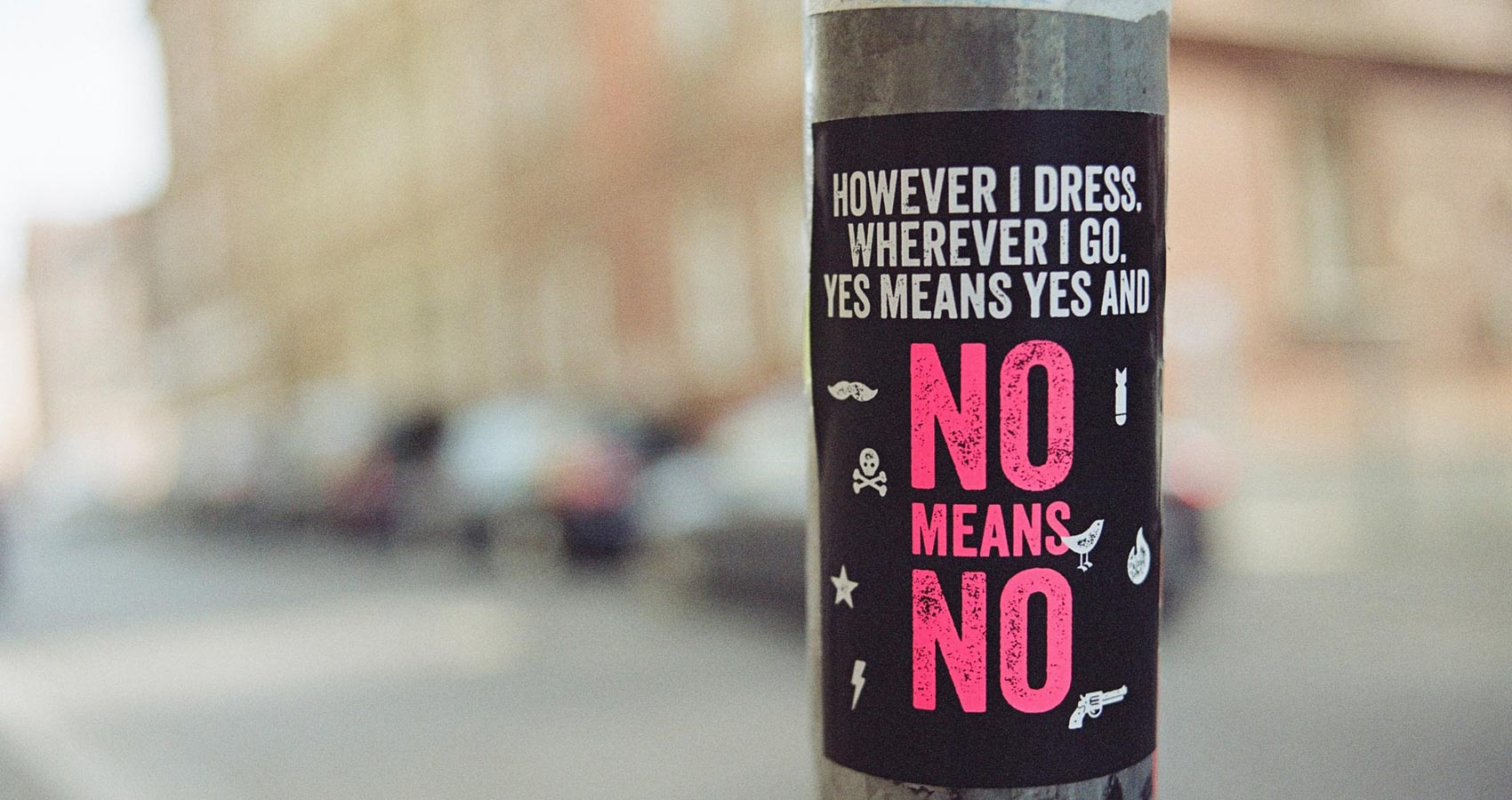 Megan:           “What’s wrong with you? You’ve been walking around this morning like death warmed over. Are you sick?”

Jennifer:         “A guy in my lit class invited me to the Lacrosse team party. Larry was away this weekend, so I went. There was a lot of drinking, pot smoking, I think some of them were snorting coke. I didn’t like it, but it didn’t threaten me. People were dancing and having fun. Ron, the guy who invited me, offered me coke, but I refused. He got me a beer and we danced. I started feeling dizzy and he led me to another room. I guess I passed out, because the next thing I knew when I woke up was my clothes were off, he was on top of me and he was inside me. (Jennifer looks at Megan, horrified) He was doing it to me. I tried to push him off, but I could barely move. It was hard to talk, but I said: ‘Stop. Get off me. Please stop’. But he kept on until he came in me, moaning like an animal.” (She breaks down sobbing)

Jennifer:         “He left. I found my clothes, got dressed and snuck out of there. I didn’t want anyone to see me. When I got back to the dorm I was so agitated I couldn’t stay there. I was afraid I’d go crazy. So I came home.”

Megan:           “First we’ve got to go the emergency room and get you examined and let them take DNA samples of your attacker. Then we got to the police and report it…”

Megan:           “You didn’t do anything wrong. He did. Let them look at him. It sounds like he gave you that date rape drug, then assaulted you. He’s a criminal. You’re an innocent victim. (Megan hugs her and whispers) If you don’t have him arrested, the same thing that happened to me will happen to you.”

Megan:           “I was so ashamed I didn’t tell anyone. I started drinking, had panic attacks, became depressed and dropped out of school. When I finally told Mom, she took me to the doctor and he diagnosed me with post-traumatic stress disorder.”

Jennifer:         “Someone should have told me something to make me understand what was wrong with you. All they said was you were sick.”

Megan:           “It took me a year to finally tell Mom what happened. By that time I was an alcoholic. I was miserable and had lost control of my life, which was a mess. I was beginning to think about suicide. Out of desperation I told Mom. She got me help, but it took two years and a lot of money we couldn’t afford before I got back on my feet. Then I went back to school and rebuilt my life.”

Megan:           “There was nothing you could have done. Now we have to make sure the same kind of thing doesn’t happen to you. I know what you’re going through. I was there. You have to protect yourself. The only way to do it is by overcoming your shame and feelings of guilt that it was your fault, then facing what has to be done.”

Megan:           “That’s why it’s so important to get treatment, with proof that it happened, and have your attacker arrested. He’ll be the one who’s humiliated when he’s in jail.”

Jennifer:         (Megan gestures for Jennifer to speak. Jennifer stares at her parents for a moment) “There’s no easy way for me to say this. I was raped last night.”

Julia:               “No. No.” (Rushes to her. Mitchell stands there stunned. Then slowly goes to her and hugs her. Julia and Jennifer are crying. Mitchell is miserable)

Megan:           “We went to the hospital and they checked Jen thoroughly. They found some of his hair on her clothes and one of his pubic hairs. They also found his semen on her abdomen, even though he used a condom. They tested her blood which still had a heavy presence of Ryphonol. There was almost no alcohol level, which proved she wasn’t drunk. Then we went to the police station, spoke to a detective, and filed a complaint. We gave them the medical records and after they questioned Jen they issued a warrant for his arrest. Jen was terrific. You can understand how she was feeling, but she did everything right.”

Julia:               “Well thank heavens for that. We couldn’t survive another case of a daughter keeping her mouth shut and going nuts.”

Megan:           “Mom! Don’t talk like that. Jennifer did us proud. She actually asked the detectives if they could arrest the guy in class.”

Mitchell:         “I know this is hard for you, Jen, but you did the right thing going to the police. This way everyone’ll know the scumbag’ll get what he deserves.”

(Jennifer nods, beginning to believe that she can deal with the nightmare.)

Megan:           “No, Mom. I thought it was more important to help her, rather than tell her about how much you spent on doctors, therapy and medication.”

Mitchell:         “We did whatever we had to in order to save our daughter. Just like we’ll do for Jennifer.”

Julia:               “I didn’t mean it like that. We’re still paying off our debt from your treatment. We just couldn’t afford another major treatment expense.”

Mitchell:         “Let’s stop talking about money and do whatever we have to to take care of Jen.”

(Sunday evening. The living room of the Bennett family. Enter Jennifer and Larry)

Jennifer:         “You weren’t here. It was Saturday night. I was bored, so I accepted an invitation from a Lacrosse player.”

Jennifer:         “I don’t believe you said that. I was drugged and overpowered. It wasn’t my choice. I was violated. Don’t you understand that?”

Jennifer:         “I hoped you’d understand and care about what happened to me.”

Jennifer:         “I expect you to be concerned that something terrible happened to me. Instead, you’re saying it was my fault.”

(Larry shakes his head angrily and stalks out. Jennifer exits)

(Evening. The living room of the Bennett family. Enter Jennifer, then Megan)

Megan:           “Just remember that guys don’t always know how to deal with something like this. It can threaten their masculinity.”

Megan:           “You have to develop a different mindset now. You were victimized. That doesn’t mean you’re helpless. Someone took advantage of you, but you began fighting back today. That shows character. It may take some time, but you’ll come out stronger from this.”