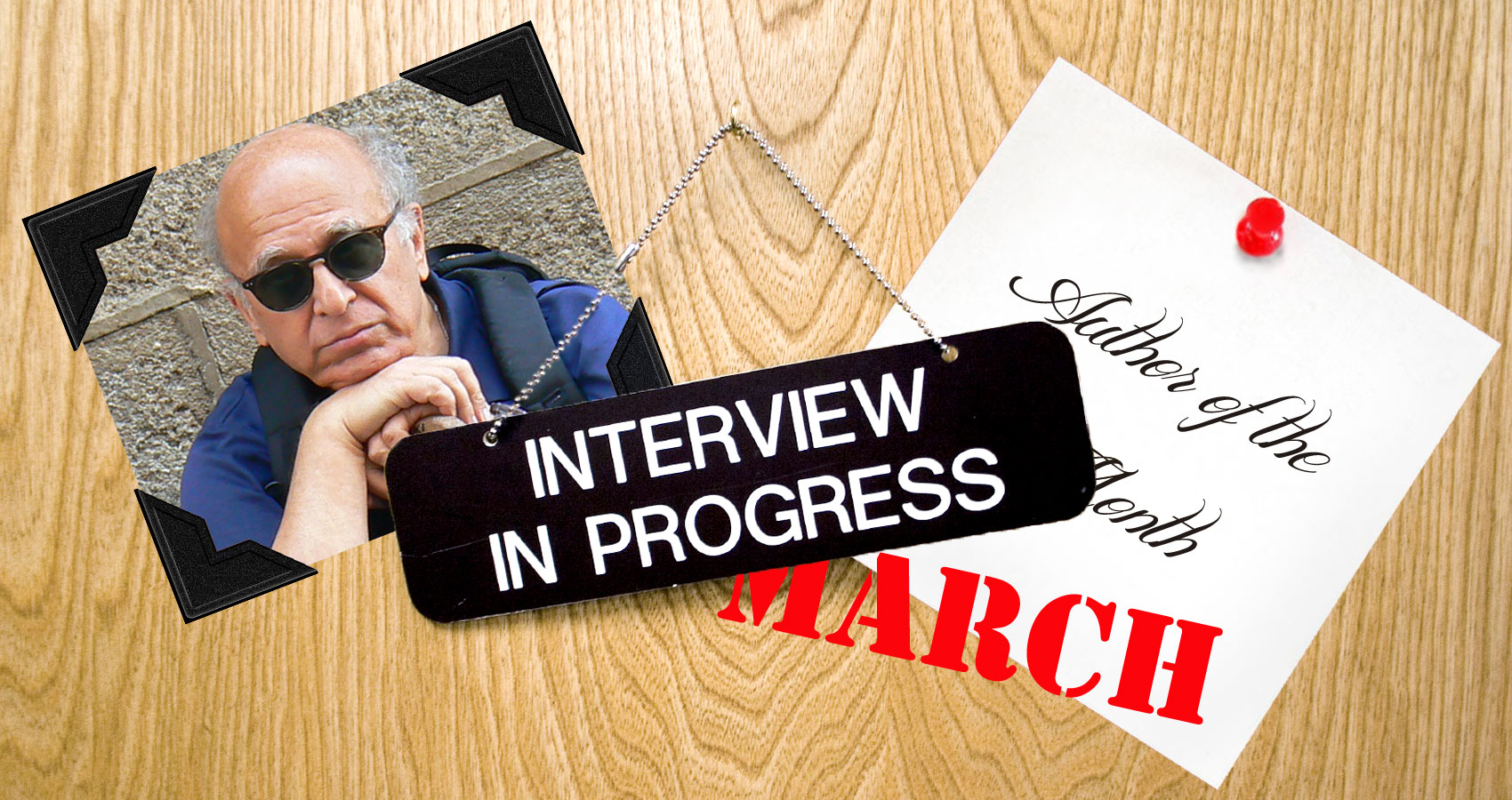 We offer our first and exclusive Q&A Interview with Warren Alexander, a writer whose literary works have been featured on our Spillwords pages as well as being Author of the Month of March 2019.

Since I wrote my first ransom note, I wanted to be a writer.

My kindergarten teacher said that I was the first five-year-old cynic she had ever encountered. I did not like children’s books because, well, they were written for children. And while others were watching unrealistic TV shows such as Leave It to Beaver and Father Knows Best, I watched TV shows like Ernie Kovacs, That Was The Week That Was, and Jack Paar. Paar had as a frequent guest Oscar Levant, actor, pianist, and wit with a twitch who sported an ‘I don’t give a shit’ attitude. I loved Oscar; there was an unapologetic authenticity to him. Kovacs did comedy bits which I did not understand but thought were wonderful. I had much to learn.
I grew up in Brooklyn, NY in a standard two parent, one son, one daughter household. I attended a high school comprised of 75% first or second generation Americans, which is the substance of overachieving which somehow I avoided. Because I was a terrible student, I did not have my choice of colleges. I looked at the subway map and chose the nearest four year school by distance, Baruch College. I met my wife there. She was impressed by how I continually made an ass of myself in Economics and has remained for the rest of my show for some 47 years. At Baruch, I was the Content Editor for the college paper. What I thought was funny and what the administration thought was funny, were three different things. Thus I only lasted one term. I also had a radio show, where I enraged some students who stormed the studio and pounded on the glass on more than one occasion, while I was on the air.
Because my grades continued to be poor, I had to wait many years to apply to graduate school so other things would matter more. I applied to only one program, Creative Writing Program at NYU. There I studied with Thomas Keneally, Peter Carey, and E. L. Doctorow, among others, where learned a great deal about writing and how to produce quality work under time pressure. I was also thrown off the graduate school literary magazine because I lacked the solemnity for their elevated status. You can sense a theme here.
Over the years, I worked in different places from Mom and Pop shops to a large municipal bureaucracy to a Fortune 10 Company and startups. One company was taken over by the Mafia because the boss could not repay his loan. In another company, the founder became old and they made him the Chairman of the Board/Dispatcher. All these experiences are fodder for my work-in-progress, a satire about business.
Almost 45 years ago, I wrote a book of a poetry that was somewhere between e.e.cummings, Ogden Nash, and Barnacle Bill. Correctly, no one was interested. I continued to receive pro forma rejection letters, until I retired early and dedicated huge blocks of time to writing, Even then, it took years to complete my first novel, “Cousins’ Club.” It was originally called “The Dead Are Annoying” but my editor thought it would be confused with the current spate of zombie and vampire movies.
Cousins’ Club is a satire about the least successful Jewish family in America and is currently being published by Creativia. It was originally self-published by CreateSpace, even though two Indie publishers were interested. One sent a contract dated February 31. I thought I do not need a proofreader who is worse than I am.
The reviews for Cousins’ Club have been exceedingly generous. It was a semi-finalist for the 2017 BookLife Award for General Fiction and the Publishers Weekly called it “an achievement.” I took a chapter from the novel and made it into a standalone short story which won second place for the Rick DeMarinis Short Story Contest. I have also had a short story called “From Brooklyn to Spain by Subway” and writing advice published in the inaugural edition of Inner Circle Writers’ Magazine and photographs in two editions of Synaeresis Magazine.

It is a most welcome surprise. With few exceptions, writers sit alone until they pass their work along to someone else for editing, publishing, or sale. So one naturally hopes that their work is appreciated in other ways. Personal notice is very gratifying.

They have been insanely supportive. I like to think of myself as hard-hearted but their help in all their forms has genuinely moved me.

I believe in the Chuck Close admonition, “Inspiration is for amateurs, the rest of us just show up for work.” Inspiration can come from a random thought, an event, a passing comment, or a vague recollection. You cannot wait for a rock to fall on your head. If you wait for inspiration, either you will never get anything done or it will be derivative.

You are a writer, musician, artist, or dancer if when you wake up in the morning you must write, produce music, create art, or dance. The catalyst is to fulfill your potential.

My mind takes me where it wants to go. So as a non-linear thinker, process is fleeting and I would rather be free to have useful and stupid thoughts, than be a slave to a schedule. As I no longer work for others and I am an insomniac, my work hours often include time between 2 AM to 5 AM. I do put in many hours trying to round my ideas into cogent and alluring sentences and paragraphs.

There are large and small rewards from creating a wonderful character that will endure for entire work to one line of dialogue that is striking. I love planting small touches-little lines, events, or characters, that I hope will almost go unnoticed, but have greater significance later in the work.

One must be careful about imagery. Too much can slow or obscure the emotion and rhythm of the story, too little may not give the proper sense of time and place.

I advise young writers not to embrace the BS, romance, and stereotypes of writing. They create artificial obstacles and built-in excuses. Just sit your boney ass down and do the hard work-write, write, write, and read, read, read, especially works with which you are unfamiliar.
And as far as writing funny is concerned, your first thought is not necessarily the best. The writer has the advantage of L’espirit D’escalier or staircase wit, which is when you think of something witty or clever after the conversation is over. The reader has no idea when you wrote the witty retort. So be patient and highly critical of your own work.

I do not have a favorite genre. I read many what is euphemistically called literary fiction, a pretentious moniker. I do read certain mysteries and science fiction, if the outcome is not solely determined by violence. For example, I like Elmore Leonard, because his mysteries are almost secondary to the characters and dialogue. I am not opposed to violence, I am just tired of it as a solution.

I do not think there is one, as we are all the distillation and the bloom of many.

What were you thinking? Seriously, it is greatly appreciated and once again a complete and wonderful surprise. And I do love the graphics that Spillwords uses to reflect my work and I am hopeful the reader does as well.

That is for others to decide. It is crazy to concern yourself with something you cannot control, as I am always surprised what people see in my work.

Is anyone free next Thursday to drive me to the doctor?
There is nothing greater in life than dedicating yourself to the arts. It is both narcissistic and a grand gesture as we bring the entire range of emotions and thoughts to strangers.
Thank you all.

MARCH 2019 AUTHOR OF THE MONTH at Spillwords.com
Warren Alexander was born and still lives in New York City. He was identified as a cynic by his kindergarten teacher, and he honed this quality under the tutelage of Thomas Keneally, Peter Carey, and E. L. Doctorow at NYU, where he received his MA in creative writing.
His satiric novel, Cousins’ Club, was a semi-finalist for 2017 BookLIfe Award for General Fiction. His work, Wrong Train, placed second for the 2016 Rick DeMarinis Short Story Award judged by Michael Matrone.
He is currently working on a satiric novel about business.