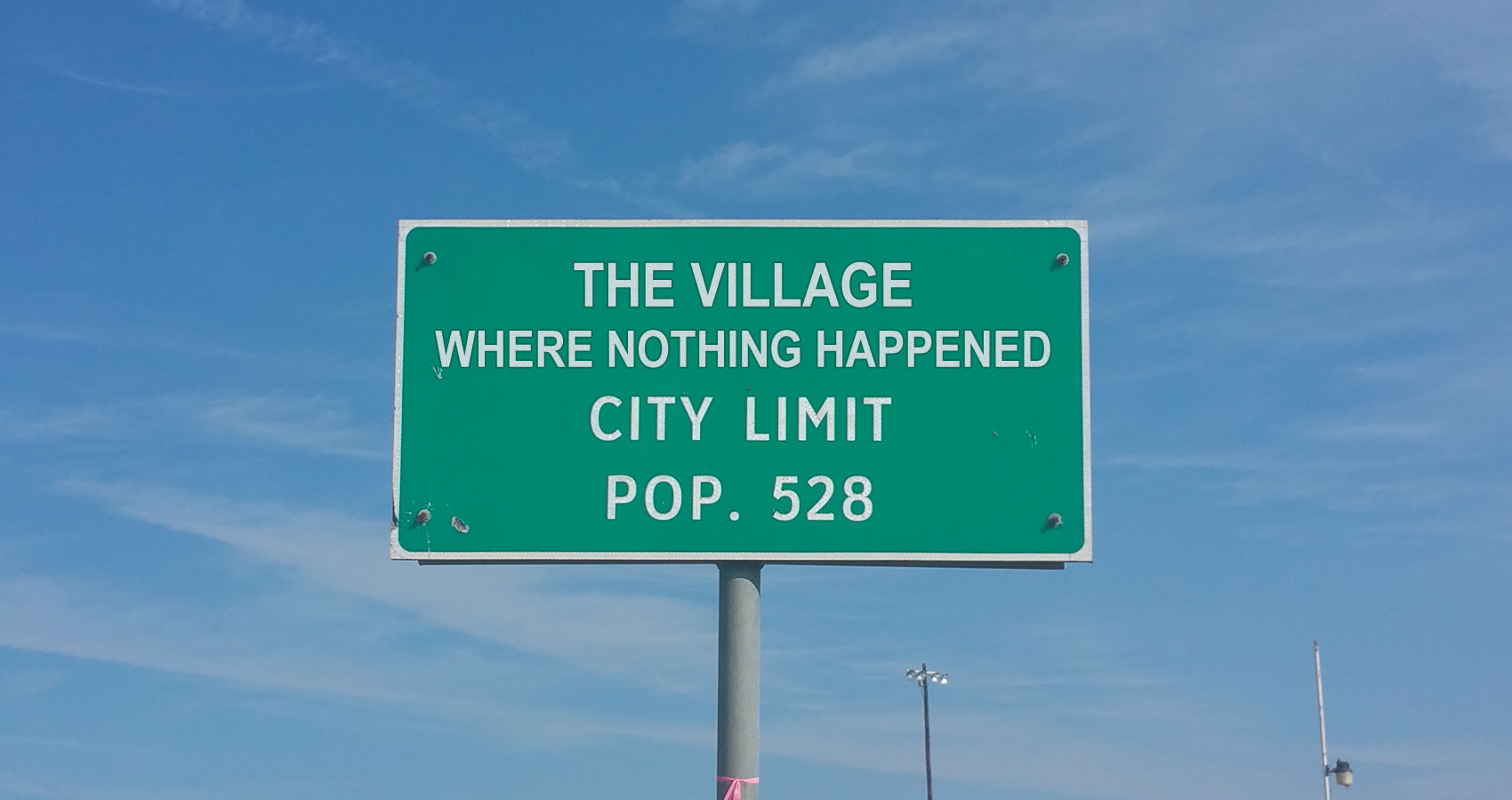 The Village Where Nothing Happened

The Village Where Nothing Happened

Talk was there had been a body found in the river. Being a small village with a tiny population the talk spread mighty fast. Pretty soon the rumours were that it was a local person who had drowned, though it hadn’t yet been confirmed if it was a man or a woman. Problem was, no one was missing from the village.

It was unclear where the rumours had originated. Talk was it was all down to Jack Granger the village carpenter, who was a well-known gossip, but Jack said the first he’d heard of it was from the widow Mavis O’Leary. Mavis said she’d heard it from the publican Rory Dodge, while Rory claimed he was told by his best customer, Burt Winkle. When Burt was finally tracked down, sleeping off a hangover, he recalled a travelling salesman had mentioned it.

It would have been on the front page of the newspaper in that month and year of May 1973, that’s if the village had been large enough to have a local newspaper. Instead, folk listened to radio broadcasts from the larger towns to see if there was any mention of it in their news bulletins. There wasn’t.

Most people in the village had never been to those big towns to the north. Talk was that they had enormous shopping centres and strange big outlets selling hot food. One of the locals, Bob Hamilton, reckoned those towns must be a bit like Sodom and Gomorrah that were mentioned in The New Testament, sinful places where the folk lived sinful lives. Village folk told Bob that someone should go out to the river to see if they could find out what was going on, but the river was around thirty miles away and few people in the village had any sort of transport.

Ralph was the only one in the village who owned a car. He was constantly polishing it. He didn’t use his car much because he said that driving on the dirt roads tended to make it dirty. Someone asked him if he would drive them out to the river to see if the rumours were true, but Ralph said no, said he’d just finished polishing the car, and the dirt track out there would make it lose its shine. Bob Hamilton told Ralph he’d get his sons to clean the car and polish it after they got back if he’d take him out the dirt track to the river, said he’d also put in five dollars for petrol. Again Ralph said no. He didn’t say why, though Bob suspected he didn’t want his sons going anywhere near Ralph’s precious car. Bob didn’t give up hope and asked around his neighbours to see if any of them had a way to get out there.

One of the local boys, Jed, told Bob that he would ask his old man if he could borrow the family horse to ride out to the river to see what was going on. Next day, though, Jed told Bob his old man had said no; told Jed that the horse was getting too old for a trip like that, could break down and then the old man said he’d have to walk all the way out there to the river to shoot it with his rifle. “It’s not on,” the old man had said, “it’s not gonna happen, son.”

Bob thought what should happen in a situation like this was that they should see the village policeman and get him to sort it out. Problem was, due to government cutbacks, the village hadn’t had a local cop for five years. The nearest police were in a bigger town fifty miles away. The local post office had also shut down eight years before. Bob’s mate, Ray, said he should call the cops in the bigger town and get them to drive over. It sounded like a good idea, but the problem was no one in town had a phone these days. Pop Bacon who ran the grocery store used to have a phone but said it was too expensive to keep in operation, so he had it disconnected.

Bob thought that maybe he could get some sort of haversack together, hike out to the river and set up camp for the night, but he knew that wasn’t practical. It was almost harvest season, and he had to get those beans picked before the grubs got to them. Anyway, his hiking boots had clearly seen better days, and lately, his back had been playing up. He considered he’d have to let the matter rest for the moment and worry about it later. In this small village, there were always other more crucial things to worry about.

Pretty soon folk in the village started to forget about the rumours of a body in the river and just went about their usual business. One night someone put a rock through one of the side windows in Ralph’s car, and that caused a stir. The culprit was never identified. No one in the village liked Ralph much anyway, so no one cared enough to bother finding out who it was.

Forty years later, Bob Hamilton was now an old man. He had a couple of great grandchildren and he liked to tell them stories about the old days in the village before it had quadrupled in size and become a tourist destination. As far as Bob was concerned, if you weren’t born in this village you weren’t a local, and never would be.

Bob told his great grandkids about the time they found the body of a dead man in the river:
“I’ll never forget it,” he said, “all decomposed he was…, was murdered by a psychopathic sinner from the town up the road fifty miles away.”
The kids listened with wide-eyed wonder.
“Talk is,” Bob continued in a hushed tone, “the ghost of that murdered man still haunts the river.”