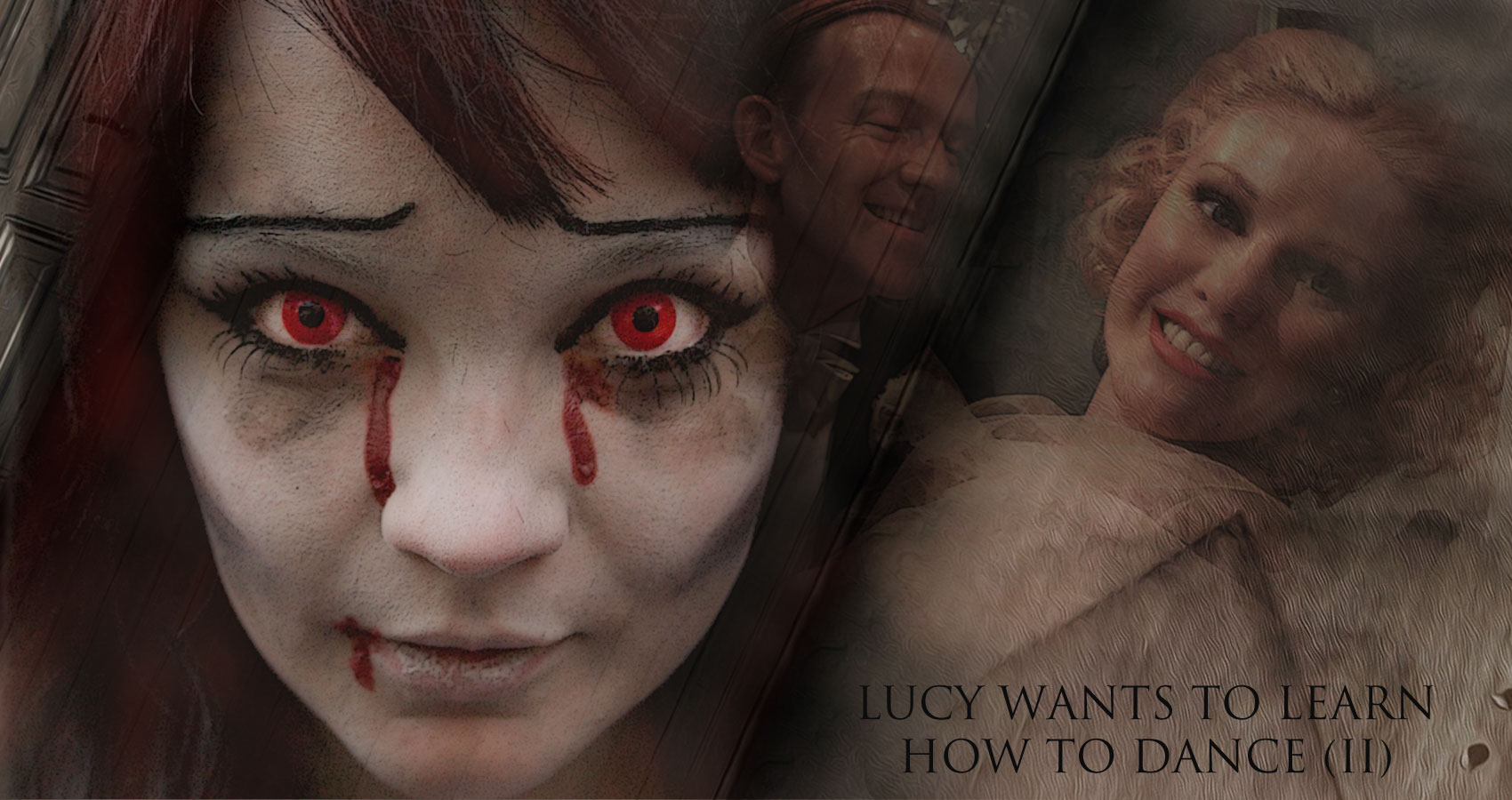 REBELECTRIC ZOMBIE – LUCY WANTS TO LEARN HOW TO DANCE (II)

LUCY WANTS TO LEARN HOW TO DANCE (II)

I turned the man’s head a little
a grisly gash was still bleeding
into a pageboy haircut
His eyes bled fresh blood tears
he must have internal bleeding still rivering down his face
I recognized him – it was Frank
the neighborhood homeless man
with “mental problems” the people said
I would see him lumbering down my street
picking up half-smoked cigarettes, lighting them with a Bic and giving them a final smoke
he always wore the same brown suit and black shoes
I gave him money for cigarettes but I was afraid to talk to him
here he was — maybe his life needed a final smoke
I was having so much fun as a zombie
and I wanted to make my dead dream come true
I hated my parents for refusing to give me dance lessons I begged for
“Your sisters took lessons and nothing ever came of it – waste of time and money.”
That’s what I was told
There wasn’t a single book of poetry in the house either
I’m so glad that they are so dead
I will show them from the hell that they are rotting in
Now that I have Frank
everything was possible
I tried to move him
he must’ve weighed two hundred pounds
and I felt so sad for him dying alone
no one even noticed
he looked like a heap of lifeless clothes
after what seemed to be a lifeless life
I was losing energy – I could feel the electricity draining
hardly any sparks around me now like tiny nightlights guiding me in the dark
I had to leave him for a moment and dragged myself to a gardening store
they always had a wheelbarrow tucked in the side nook outside the store
for carrying large bags of fertilizer and potting soil
This was an emergency – it wasn’t even locked
who would steal, I mean borrow a wheelbarrow?
Me, right now but to be polite I left a note
I will return this by tomorrow and tacked it to the wall with a stray nail
I rushed back with the wheelbarrow huffing and puffing
my battery pack was making noises – and whiffs of smoke were rising I was draining all the energy
there was a sudden burning in my chest – was I about to burst into flames?
This would be no sugar-coated death the second time around either
A magical gust of wind seemed to help me lift Frank’s body rolling him onto the wheelbarrow
I covered him with my two dancing gowns and pushed as fast as I could down Duncan Drive
back to my house for an electrifried night

Finally back in the basement with my new friend
a former old acquaintance when we were both alive
I pulled the battery pack from my stomach which had melted
into my skin burning it
I had to re-duct my duct taped wounds all undone
I gave myself a fresh jolt of electricity
then I was hungry again
I ate a bowl of Poisonberry Crunch Cereal
and in the bottom of the box
A wrapped surprise!
I fumbled again with the wrapper and finally could see
Two pairs of dancing shoes
Yes! What a gift – destiny in the bottom of a cereal box
Bursting with hope I went to work prepping Frank for his debut
as an electric zombie

I hooked Frank up with wires
and plugged him into the electric socket
Sparks flew and a screeching noise rose from his chest
then his body bolted jolted upright
and he opened his eyes!

He looked at me, blinking several times, recognizing me
“Thank you for the cigarette money…” Frank whispered as if talking
in his sleep

“My head feels split open but overall, pretty good. How are you?”

I was overwhelmed with happiness. I created a new friend. My first friend in decades of loneliness.
Somehow I never considered John a friend.

“I’m great. Really great now that you’re here… Not to rush you or anything but do you have any
dance experience?”

Frank started to laugh so hard he started crying more blood tears. I wiped them away and there
were weeks of getting Frank acclimated to his new electrified body.

I finally got to know Frank. He was a carpenter and worked odd jobs in the tri-city area, then his wife died and he lost his mind, drinking and wandered off one day and never came back. He was on the streets for at least twelve years.

We watched movies together and while we were watching Swing Time I finally got around to my dead dream.

“I have a favor to ask you. I need a dance partner to learn how to dance well enough – well
I was hoping we could send an audition tape to Dancing With The Stars and maybe they could do a tribute to the dancing dead and we could be special dead guests.”

Frank looked down at his legs and arms circled with sparks. He looked at me and smiled.

So we practiced day and night watching Swing Time and YouTube videos of the jitterbug and paso doble. I thought we could do a monster medley to show off our newly discovered talents.

A pleasant surprise, when we gave ourselves an added boost of electric juice we could lift ourselves
off the ground! A new idea – a tribute to La La Land which I had only seen clips from but they fly across the sky. That was the new dream tacked onto the other all-important dream.

While Frank was sleeping, I wrote him a little poem and tucked it under his pillow:

I hadn’t written a poem since I was fifteen – I was brainwashed that poetry was “a waste of time and money” like dancing. Of course I knew these were lies, the most killing of lies to tell any creature
with a soul. Perhaps the dreams that were embalmed in life could come true in this weird wonderfully strange afterlife. Time would tell.

Today was the day. I bought Frank a tuxedo and black patent leather shoes with taps so we could
start with the Swing Time dances and end with the flying across the stars. Frank built a stage with stairs and I decided on the white gown with the feathers like Ginger Rogers.

I set up four remote cameras so every angle would be captured and we could edit the best parts together. Note to self – learn editing.

Frank walked toward me in his tuxedo looking quite polished.

“You look so handsome.”

Frank could barely speak – “Thanks, you look just like Ginger Rogers.”

I blushed and in a far off mirror – yes I did. Down to the red hair and perfect curls.

I took his hand “Shall we dance?”

The music started and we danced, no floated across the floor – three steps right, three steps left
then tap dancing up the stairs perfectly in time with music and each other
we attacked the paso doble with all the ferocity of a runaway freight train
then when we got to the La La Land Tribute
we held each other close as we floated into the air across the wall painted with stars
we finally landed, exhausted

Frank spoke first. “What did you think?”
I smiled and laughed drunk on the dance, drunk on Frank “It was perfection.”

We edited the footage together and tweeted #DWTS and #LALALAND

It also happened to be Oscars night so we sat in front of the TV and placed our bets:

I bet La La Land would win eight Oscars. Frank bet that the movie would win all fourteen. A total sweep. That’s when I realized I loved Frank. I was so glad I zombifyed him.

Suddenly, the door flew opened. John was standing there, covered in dirt, holding a shotgun.