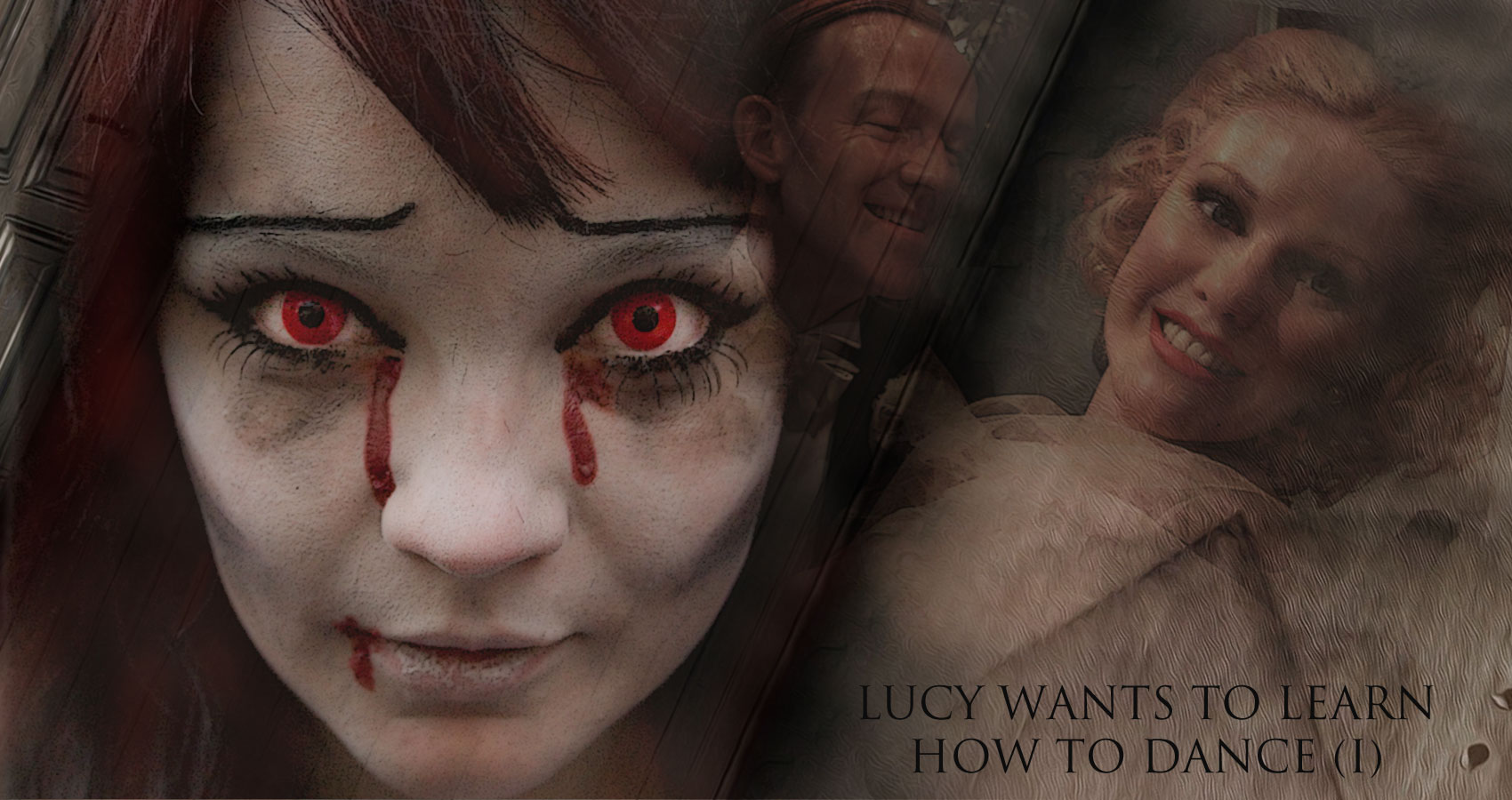 REBELECTRIC ZOMBIE – LUCY WANTS TO LEARN HOW TO DANCE (I)

LUCY WANTS TO LEARN HOW TO DANCE (I)

I was a crumbly calamity after that bomb exploded all over me
I was a heap of a thousand puzzle pieces that somehow knew how to magnetically find each other
one elbow bit knew where the other elbow bit was
I started to fuse myself back together
each puzzle piece found its matching groove
kind of like love I guess
I was finally able to stand up with great difficulty
I used a broomstick to hobble around
I fixed the remaining holes with duct tape
which worked amazingly well
I felt good again
then I was hungry
so I ate some more Poisonberry Crunch Cereal
and at the bottom of the box
another wrapped surprise!
My newly fused fingers fumbled with the wrapping
inside was a tiny record player –
wait, the kind with the metal cone – a phonograph or gramophone
from 1877 that Thomas Edison invented
I sat it on the table and stared at it for a while hoping it would play something
magical things happen all the time, don’t they?
but the beautiful phonograph sat silently – then a sigh seemed to rise
from the cylinder
and since a jolt of electricity seemed to make everything more exciting and alive
I tied a bunch of wires from the phonograph needle to the electric socket
then plugged in the wires
a bolt of lightning shot across the floor then sparks seemed to dance as a song
began to play – it was Frank Sinatra’s voice –
And now the end is near
So I face the final curtain
My friend, I’ll say it clear
I’ll state my case of which I’m certain

I was so happy I wanted to dance
but I never learned properly
and I wanted a partner to lift me in the air
and spin me around like in all those musicals
I was Ginger Rogers and I needed my Fred Astaire –
but where?
Where could I find him?
I’m not going to sugar-coat this
I needed to find a dead body to be my otherworldly dance partner

So now I was excited
my zombie motto is – don’t give up on a dream just because you’re dead
I am going to live my electrifried dream – perhaps more alive than when
I had an actual pulse
there’s so much freedom really
so I juiced myself up by sticking my fingers in the electric socket
oh, and while I was sleeping I dreamed of a kind of battery pack I could attach
to myself – a lithium battery so I could go outside longer
I attached my new battery pack to my waist and covered it with a cool black vintage leather jacket
then poked holes in my wrists and stuck the wires inside so I was getting a steady series of energy jolts
I “normalized” my face with a ton of makeup, blush and my new fave – poisonberry lipstick
I looked in the mirror
yes – the posionberry gave me a deadly beautiful glow
I looked fantastic

I went to the closet and took out the lockbox and opened it.
I took out a wad of cash – I had to buy a gown and dancing shoes that sparkled

You’re probably wondering how I have so much money
well, remember my brother John?
He killed me for the insurance money then felt bad and helped make me a zombie
then of course, as it is with siblings, I killed him back
but did not zombify him – he’s buried under the wood shed in the backyard
Funny how evil works its way in
we could’ve lived as weird roommates for decades but instead he had to be so rude
and kill the hell out of me

To quote Allen Ginsberg: When I died, love, when I died my heart was broken in your care

Even though we never got along, John was the only family I had and neither of us got along with anyone else at all so we made the best of a life in isolation.

Then he had to get greedy and kill me.  The nerve!  So I killed him back and I don’t  have to work ever again

I walked slowly through the haunted streets of my childhood
looking carefully at the faces and bodies of my potential Fred Astaire
People started to stare
electrical sparks were surrounding me as if I had my own constellation of stars
I hoped I wouldn’t catch on fire
I stopped in at one of the local bars
Ghost Vittles And Grog – good hamburgers and a dance floor
When I was only fourteen and my older brother John was eighteen
he would take me here – everyone thought I was eighteen
no one carded me and lots of guys wanted to dance with me
I had so much fun on ’70’s night when they played all the songs from Saturday Night Fever
I wore my red polyester dress and silver high heels
I felt beautiful when I was dancing – I was so happy
I wanted that feeling again – don’t we all?

Not much open except a small dress shop called Vogue Designs
Run by Joanne Ponatowski who I went to school with
I walked in and pulled the collar of my jacket up to hide more of my face
Joanne looked up as I walked in and smiled
She was always outgoing and quite the talker
I got in trouble once when she was talking to me during class and I was trying to pay attention
and the teacher yelled at me “Hey, stop talking or I’m sending you to the principal’s office”
I had no problem defending myself – “Mr. Ketchum, I was listening, not talking.”
I ended up in the principal’s office anyway for my “flippant” remark before I knew what flippant meant

Now Joanne had a sadness about her – a single mom of three – her rat of a husband ran off
with some floozy.
I looked past her sad smile to a half-eaten Styrofoam container of ramen noodles
She held her smile up like a sword “Can I help you?”
“Yes, please, I would like to buy a beaded gown or a gown with lots of feathers like Ginger Rogers wore”
Joanne laughed so loud and bright I turned a shade of crimson, not sure if it was embarrassment or the heat from the battery pack
“let’s see what I what I have in stock.  I can always order something for you in another color or-”
Just then the door opened and in walked a man in a hoodie holding a gun
“gimme all your cash or I’ll shoot your head off”
At first I was paralyzed but even with the hoodie I recognized that whiny timbre like a broken rusted trumpet
“Rickie Wicceson”
He turned, unpleasantly surprised and pointed the gun at me
just enough time to pull the wires out of my wrist, punch the gun out of his hand while giving him quite an electrical shock in the neck in one swift uppercut motion

He screamed as I picked up the gun.  Rickie’s neck was smoking with lots of burn holes
“How did you know it was me?”
“Once a weasel always a weasel.  Hand me your wallet.”
“What?!”  Hand me your wallet.  You need another volt or two to come to your senses?  Robbing a single mother of three?!  Shame on you.”
Joanne stared at me.  “How did you know…”
Rickie reluctantly handed me his wallet.  I took out the cash.
“Fucking drug dealing son-of-a-bitch.  Your mother must cry herself to sleep every night.  If I hear or see you doing another crime I will come after you.  I know where you live, I know where your mother lives, and your good for nothing cousins live.  Do you hear me?”

He glared at me in disbelief.  Finally – “Yes”
“yes, what?”
“yes, ma’am.”
“Now get the hell out of here and I’ll be checking your activities in the next few weeks so don’t even think about dealing on Franklin and Strattmore anymore.”
He scrambled to his feet and left.
Joanne looked a bit faint.
“Thank you.  I don’t know how–”
“It’s okay, I’ll just take the red beaded gown and the white one with the feathers.”
She grabbed the two dresses and brought them over noticing the sparks shooting out from my jacket but said nothing.
I handed her all the cash in my pocket.  She pushed the money away.
“No, no, they’re free.  I don’t know what I would’ve done if I got robbed again.”
“Take it, please.  I have to go.  I’m a bit out of breath.”  I struggled to inhale, my chest was burning
I turned and walked out.

In the night breeze, I suddenly felt faint.  I had to sit down.  I found a bus stop and sat on the cool bench.  My hands trembled as I tried to stick the wires back in my wrists.

I panicked.  I might not have enough energy to get home.  I had my Ginger Rogers gowns and I still hadn’t found my dance partner
In a fresh state of despair
I stumbled to my feet
in the darkness I nearly fell over a man curled up behind the bus stop
I touched his reaching hand paralyzed in a search for something only he could understand
the hand was ice cold
he was dead
This was my Fred Astaire

A newly undead zombie, Lucy wants to make her undead dreams come true – starting with learning how to dance like Ginger Rogers.