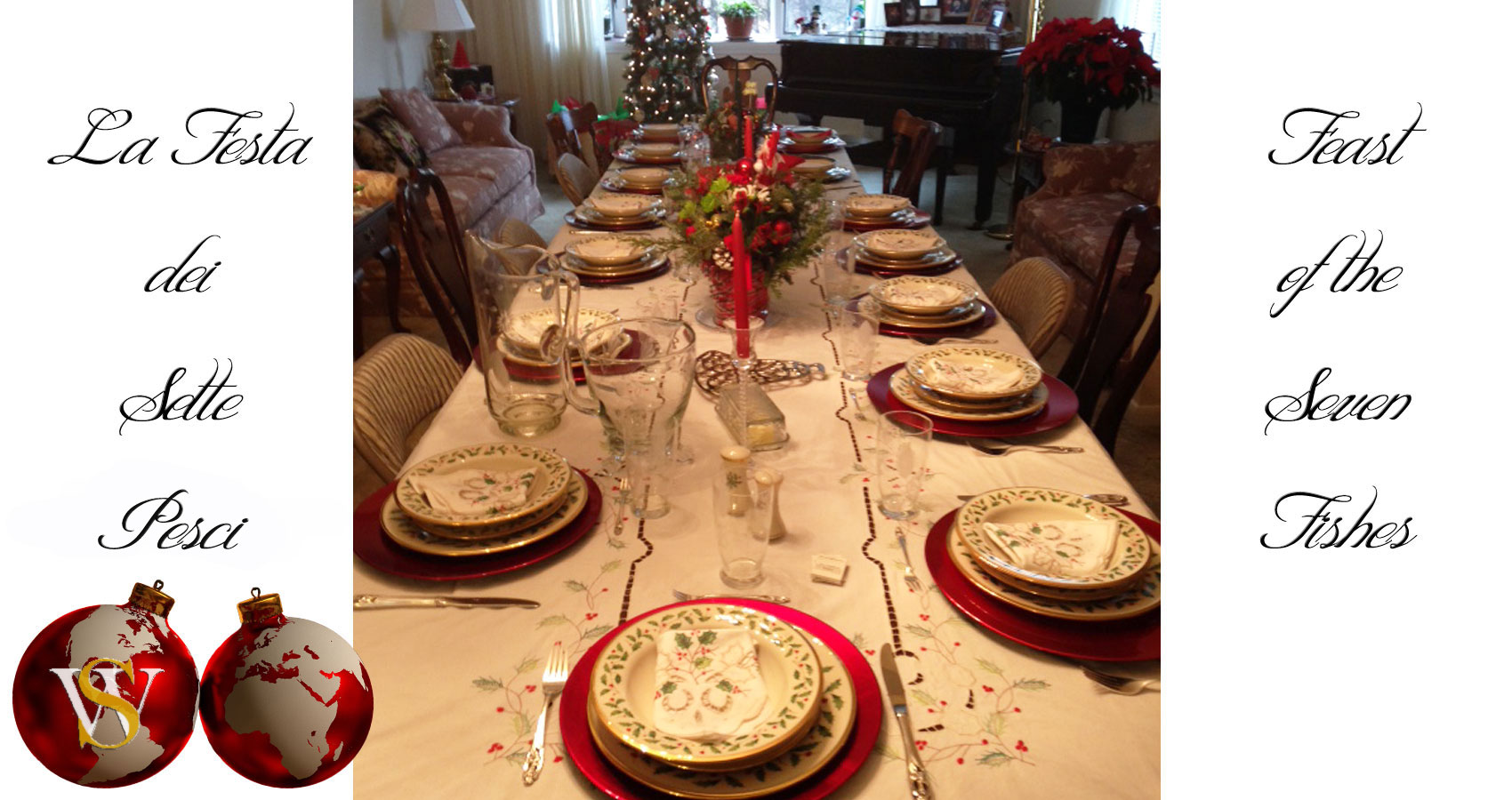 There’s one meal my family looks forward to all year long, and that is the Italian Christmas Eve dinner known as the Feast of the Seven Fishes (“La Festa Dei Sette Pesci”).

Google the English phrase and you’ll find as many different theories on the origin of this tradition as the type of dishes involved. The commonality across those who celebrate the tradition is that the meal involves seven types of fish and lots of it (due to abstinence from meat on a Holy Day).

For the consumption of this meal, it’s the one time of year my Mother’s Napoletana side of the family is together at one time in one place. I cross three time zones to enjoy this meal. I leave balmy California for the frigid, arctic East Coast and it’s worth every mile and cold shiver I have to endure.

The number of diners at our table varies from year to year, depending on how many significant others and family members join our celebration. Friends who are invited to partake in our annual tradition are honored and considered very special. The number of diners also fluctuates during the course of the meal, which takes about four hours to consume.

For this reason, mass quantities of seafood are purchased so no belly invited or randomly attending will be unfed. If you have ever dined with an Italian family, you know the worst sin of all is to go hungry. Even if you can’t digest another bite, it’s considered an insult to the host if you don’t eat what’s being offered. You must eat whether you want to or not.

I was able to experience the buying of the fish firsthand which at one time was considered top secret. Being from a prominent family, my Grandmother bought her fish from a particular seafood market and the order was placed months in advance. It may have been the most expensive purchase the market saw at one time in a year. The employees knew my Grandmother by name, addressed her formally, and practically bowed in her presence when we entered the market. I had to wait in a public area while my Grandmother went into a back room to negotiate and fork over ridiculous amounts of cash. I wasn’t allowed to witness this negotiation.

Although the seven types of fish vary between regions and families, our meal begins with linguini and crab sauce, large crab legs and lobster tails. This is the messiest part of the meal. The lobster bibs come out as we take to our nutcrackers to break open the crab shells or to remove the delicate, delicious meat from the lobster tail with a small cocktail fork. It may take a few lobster tails to perfect the art of removing the meat in one whole piece without breaking it. It’s a bit of an art. At some point, you realize it’s easier to eat with your hands, so manners and utensils are tossed aside.

With sauce all over our fingers, plates are removed and the second course is served. This course contains two separate dishes; both packed with heat. The calamari (squid) salad and scungilli (conch) salads are combined with celery, a ton of garlic, hot cherry tomatoes, vinegar, lemon, black olives, salt and pepper.

The third course involves bacala (cod) either fried or in a salad, as well as fried smelts.

The piece de resistance and the course we all anticipate is the colossal baked stuffed shrimp. These shrimp are approximately 5 inches long and 1 ½ inches wide (hence “colossal”), filled with a delectable mixture of butter, bread crumbs, chopped parsley and my Grandmother’s key secret ingredient only divulged when the tradition passed down to her daughters. I won’t divulge it here in respect to her.

The final course involves coffee along with ridiculous amounts of pies, cakes, Italian cookies and pastries, including cannoli (little tubes) from Arthur Avenue, “Little Italy” of the Bronx.

This feast is extremely caloric and fattening. With the first course starting around 6:00pm and dessert wrapping up at 10:30, it’s a gastronomic marathon. Bloated and exhausted, with shirt buttons popping, pant seams busting, and severe upper gastric pain, we head to bed after midnight on full stomachs for a quick five hours sleep (if the kids allow) before it’s time to open presents and cook the Christmas Day meal, another dining marathon.

When we were kids, we had to endure what seemed an excruciating amount of time while the adults consumed this meal and several rounds of coffee before presents could be opened. We kids only cared about the pasta course; we had not acquired a taste for seafood yet. With my Grandparents, four aunts and uncles, and cousins, the entire parlour floor would be covered in wrapping paper by the time we finished opening presents. The layer of paper was so deep, we could even bury ourselves in it, as if it were a pile of autumn leaves. There was enough paper to fill several large black garbage bags to tote it all away.

In current day, the focus has shifted towards the consumption of the meal, enjoyment of family, and remembering those special family members who no longer dine at the table, but remain close in our hearts. Our celebration isn’t of the “retailer-created” variety, which has associated Christmas with the plowing down of people on Black Friday, childish fighting over toys, spending exorbitant amounts of money, and men in red suits. This unfortunate frenzy has nothing to do with the true meaning of Christmas.

Then we count 364 days until we do it all over again.

L. M. Giannone is a writer and poet living in the San Francisco Bay Area. Originally from Southern Connecticut, Lisa transplanted herself in California to escape the harsh winters and summers of New England.
She is the author of No Vacancy, a collection of humorous personal essays, and A Touch of Noir, a collection of short stories written in noir style. She has two books in the works for 2017 publication.

Latest posts by L.M.Giannone (see all)