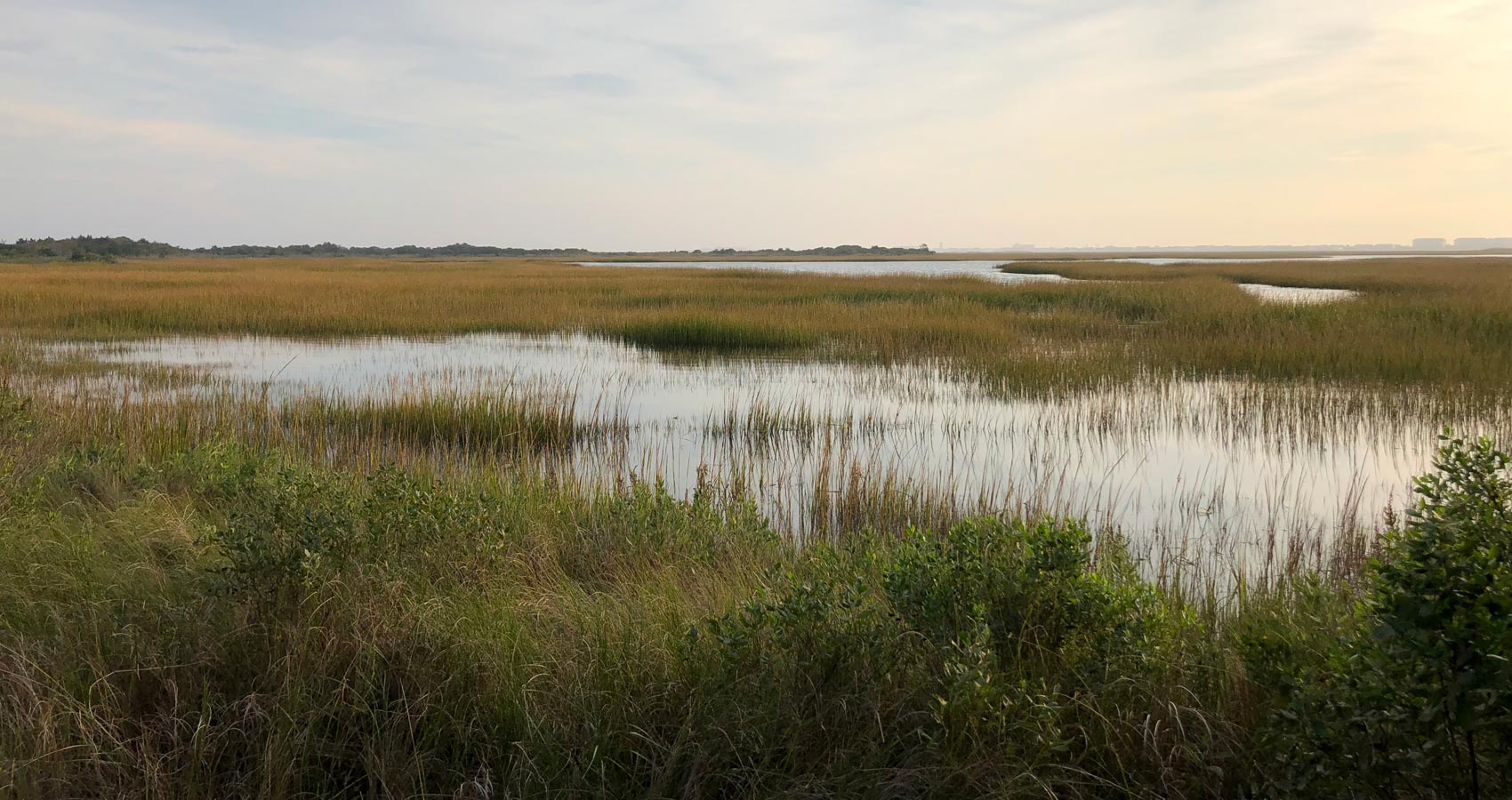 I drive across the Walt Whitman Bridge from Pennsylvania into New Jersey. I live on that little peninsula at the southern end of the state called Cape May County. On one side is the Delaware Bay, on the other is the Atlantic Ocean. My house is on the bay side, about eight blocks from the water.
I drive through rural South Jersey, home of the Pinelands, including Wharton and Lebanon State Forests, under which lies one of the largest, purest, untouched aquifers in the country. It’s also home to a lot of farms. They don’t call it the “Garden State” for nothing. Mile after mile of blueberry fields, cranberry bogs, and fruit orchards, mostly peach and apple and pear trees. Enormous fields of fresh vegetables and row upon row of corn. Roadside stands are everywhere in New Jersey in the summer, selling fresh fruit and vegetables and honey.
Heading further south there are glimpses of the marsh, as the land mass shrinks to a peninsula and the water intrudes on both sides. The marsh is a green carpet that rolls out half a mile or more towards the bay, intersected by winding channels, the adjoining land dotted with cedar trees and dying hardwoods, many of them already stripped of their bark, worn to a dull silver by the weather, sticking out above the marsh like ghost hands haunting the day.
When I first moved to the peninsula I thought it would be cool to live near the water, where I could see the ocean when I was standing on my front porch in the morning drinking a cup of coffee. You know, just like in the movies and commercials. But after living in close proximity to the bay for twenty years, I’m glad I live where I do, a half mile back, especially after Hurricane Sandy hit land. People on the Atlantic Ocean and on the barrier islands side of the Cape got hammered pretty hard. That was the first time I saw the water in the marsh flood over the road since I lived here.
If you don’t believe the sea level is rising, come visit me sometime and I’ll take you down to the marsh and show you where the water level used to be twenty years ago, and where it is now. There’s not much room left anymore under the small bridges that span the channels and connect the roads north and south. As the sea level rises, this peninsula I live on will be one of the first land masses to disappear. I’ll never see it my lifetime, of course. But it’s definitely happening.
Alexandria, the city Cleopatra lived in on the Mediterranean, is presently twenty feet underwater. It took a couple thousand years, but in Earth time that’s the blink of an eye.
I still have one stop to make for Sweetie’s flowers before I arrive home. Whenever I’m away I always bring her flowers when I return.

I eventually reach the house, walk in the front door holding my bouquet of flowers, and find Sweetie on the couch doubled up in pain. Marion, her fifteen-year-old daughter from her first marriage is sitting on the edge of the cushion holding her hand.
I pull up a chair. I can see the pain in her face. “What happened, Sweetie?”
“It’s her stomach,” Marion says.
“Is it something you ate?”
“I don’t know,” she manages. “It just hurts so bad I can’t stand it.”
“Do we have any good pain pills?” I ask.
Sweetie shakes her head no.
Figures. How many pain pills had I taken over the years just for kicks? Now that I’m straight and somebody really needs one, I’m out. Bad karma coming back to haunt me.
I can see she’s perspiring. Intense pain can do that. I feel her forehead. Her skin is glistening and clammy, but she doesn’t seem to have a fever. “I’m going to call an old acquaintance. He should have the necessary medication.”
“Who?” asks Marion.
“Never mind,” I reply. “You don’t have to know everything.”
“I’d rather you didn’t,” Sweetie says. “I want you to stay away from those people.”
I don’t contradict her. She’s probably right. The less I see of the old crowd the better off I’ll be.
“But that’s not what I’m worried about,” she says.
“I know,” I confide.
“It’s the other thing.”
“I know.”
“I’m a little scared,” she admits.
“Me too,” says Marion.
I glance at both of them. Marion has the worried look as well. She’s been through it with her mother in the past. We both understand what she’s talking about.
Now I have the worried look too.

An excerpt from a published work of fiction, SWEETIE.